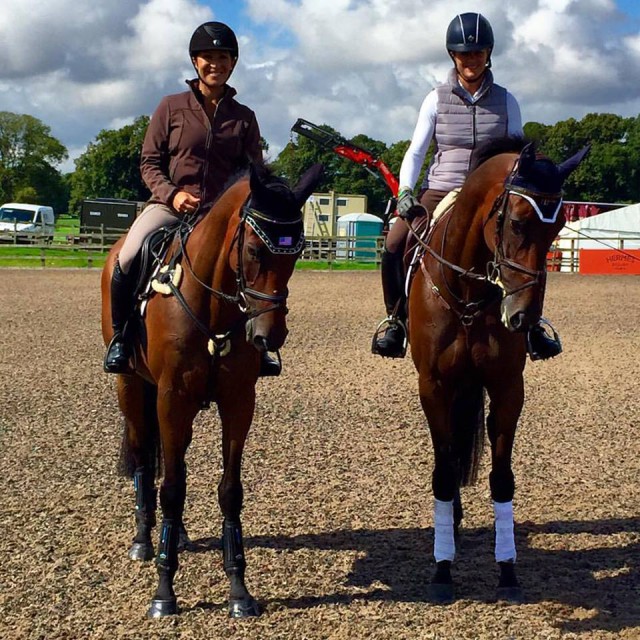 It’s Burghley week! While not quite as exciting to us Americans as Rolex week, Burghley is still a fantastic reason to use the Ctrl+Tab buttons on my keyboard at work, attempting to watch our American and American-based riders without my boss catching me. Our riders each have a good shot at doing quite well, so all of my fingers and toes are crossed for them to all put together three fantastic phases.

Lynn Symansky thinks her Aachen run-out was a blessing in disguise. After several sudden changes of plans, Lynn found herself as part of the U.S. team at Aachen. Despite the fact that the course didn’t particularly suit Donner, she was almost home clear when a fly-by at a corner put a dampener on her day. Lynn has spent the time in England making sure that mistake won’t happen again, and feels her focus has been helped by the run-out. [Headed to the Biggest Baddest Four Star]

Queen of Instagram Laine Ashker is also over the pond for Burghley. It’s well known that Laine has won Instagram over all the eventers. The Chronicle is following along, posting her photos of the trip on their website and Instagram account. So far, the American contingent has flown over and achieved stabling status. Next up, the fashion wars. [Go to Burghley with Laine Ashker]

This week in Horse & Hound’s Numbers: Cilnabradden Evo, the horse who fell with Andrew Nicholson just before the finish at Gatcombe, is back out again with a new rider. Oliver Townend has taken the reins and won an Intermediate section at Richmond with him. [Eventing in Numbers]

The Schramms have found a gem in Stephanie Simpson. Stephanie answered their ad for a groom with a comment about understanding Dom’s accent since she had previously worked at Outback Steakhouse. That sense of humor combined with the ability to work long, hard days meant the partnership with the Schramms was meant to be. Now Stephanie helps with everything from daily turnout to grooming at Rolex, in between cameos on Evention.  [Groom Spotlight]

Consider attending the MLC Fall Classic in Millbrook, NY. All proceeds from the jumper show will go to benefit Equine Rescue, a shelter that rescues abandoned or neglected horses and brings them back to health. A silent auction and sponsor dinner will also help raise funds for the rescue. [MLC Fall Classic]

Organize the way you pack for a show. Max Corcoran is writing a new series for the USEA and her first article regards packing for an event. I absolutely love organizing all the things and this method pretty much hits on most of the things I do to stay organized before, after, and during a show. [Tips and Tricks of Packing for an Event]

SmartPak Product of the Day: Leather cream soap isn’t my day to day cleaner of choice, but Effax has made such convenient packing that they are now my go-to for horse shows. There nothing like being able to whip off the cap and then use it as a hanger on my bridle rack. [SmartPak]

Let’s throw it back in honor of Burghley week and watch Sinead dominate the cross country in 2012.