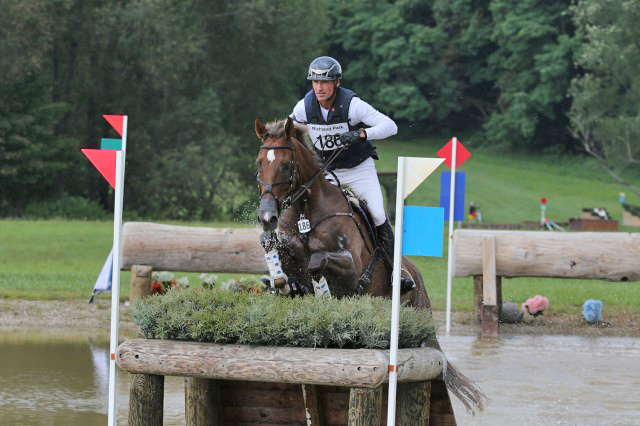 Matt and Cecily Brown have experienced just about every high and low of eventing in the past few weeks. After receiving the good news in July that Matt had been awarded two competition grants to make his overseas debut — at Blenheim with Super Socks BCF and Boekelo with BCF Belicoso — things started coming unraveled.

Super Socks BCF and BCF Belicoso, both 9-year-old Irish Sport Horse geldings owned by the Blossom Creek Foundation, competed in the Intermediate divisions at Fair Hill in August, with both horses having a slow run around cross country with their bigger fall events in mind.

“It became evident the night after cross country that Belicoso had injured himself, and while his prognosis is very good, he will require some lay up this winter and his fall season is out,” Cecily said on Facebook yesterday. “We put our hopes in Super Socks, thinking that out of two grants, luck could surely not be cruel enough to snatch them both away.”

Then the unthinkable happened this past weekend when Super Socks colicked badly and had to be rushed to New Bolton Center while Matt and Cecily were in Whidbey Island attending her sister’s wedding. Boyd Martin’s groom Sergio Reyes valiantly stepped in to take “Flaxen” to New Bolton, where the vet team thankfully was able to get the horse through the night without needing surgery.

Matt and Cecily were able to bring Flaxen home from New Bolton yesterday morning. While the horse will be able to return to regular work in just a few days, they knew having Flaxen ready to travel overseas and compete at Blenheim in two weeks was out of the question.

“We were devastated to have to call Joanie Morris and tell her that Flaxen would not be able to go to Blenheim, but relieved beyond words that Flaxen avoided surgery and was home where the kisses are plentiful and the cookies even more so,” Cecily said.

“Joanie, being the eternal pragmatic, simply said we should switch his entry to Boekelo from Blenheim to allow him more time to recover. One call to the selectors and it was done, and our despair and disappointment at missing Matt’s first overseas event turned to excitement and jitters all over again.”

The teamwork and consideration shown here speaks volumes about the support eventers give each other every day in this community — from Sergio Reyes stepping in to take Flaxen to New Bolton to USEF Managing Director of Eventing Joanie Morris finding a way to get Matt overseas this fall.

I’ve often said it would be beneficial to the USEF Eventing High Performance program as a whole to see more flexibility in the grant process. So many times a last-minute injury or unexpected set of circumstances crops up, leaving riders unable to use a grant they worked so hard to receive.

With that in mind, I applaud the USEF Eventing Selection Committee for reallocating two grants yesterday. The first reallocation allowed Matt Brown to use his Jacqueline B. Mars Competition Grant from the USET Foundation, originally awarded for Blenheim, to compete at Boekelo instead after Super Socks BCF’s colic scare.

The selectors also reallocated Jennie Brannigan’s USEF Land Rover Competition Grant originally given for the Rebecca Farm CCI3*. Because Tim and Nina Gardners’ Cambalda was ultimately chosen as the traveling reserve horse for the 2015 U.S. Pan American Games team, the timeline ended up being very tight for “Ping” to also make the trip to compete in Montana.

With the horse’s welfare in mind, Jennie and the Gardners opted not to use the grant at Rebecca, instead requesting that it be reallocated to get Ping across the pond to compete at the Pau CCI4* next month. It’s wonderful to see a decision made in the horse’s best interest rewarded by allowing the grant to be switched to another competition.

Kudos to the selectors for working with both Matt and Jennie to help them realize their goals for the fall season. Congrats to all of yesterday’s fall grant recipients, and click here to see July’s list of USEF fall grant announcements.