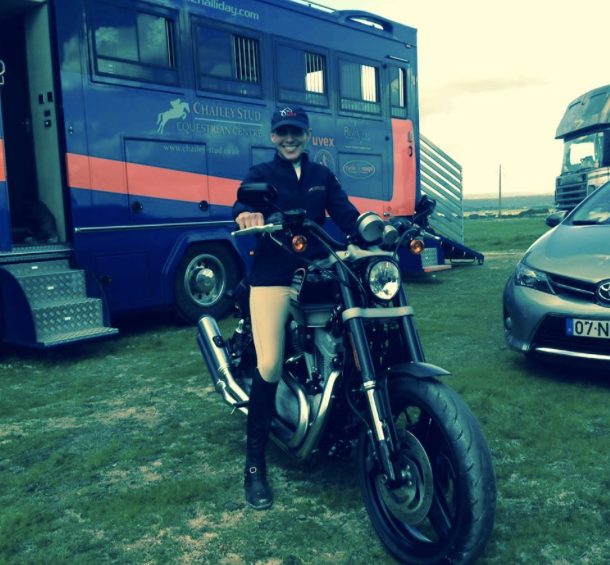 Good morning EN! British-based US event rider Liz Halliday won the CIC2* at Vale Sabroso in Portugal aboard her mount Fernhill By Night last weekend, taking home the impressive prize you see pictured in the photo above. While I can’t say I know very much about Harley Davidsons, I can say that particular motorcycle looks really impressive. Big congrats to Liz and her team for the win, and stay safe on that bike!

The USEA’s Young/Future Event Horse Seminar began yesterday in Florida. EN’s own Visionaire was on hand to watch the proceedings, and you can check out her report after the jump. The seminar will continue today. [EN Day 1 Coverage] [USEA Day 1 Coverage]

Are equestrian sports securely in the Olympics? A new opinion article published by Horsetalk argues that they are not. The IOC is considering enacting “radical reforms” this year that would impact the summer Olympics beginning in 2020. The debate mainly surrounds the increasing costs of bidding to host the Olympics, and then actually building the venues needed to host them. Increasing expenses mean that fewer cities will be able to compete to host the games, and the IOC aims to reduce the overall costs of hosting. The article argues that the FEI should be using its lobbying power to ensure the IOC council understands the value that equestrian sports add to the Olympics as these issues are debated. [Horsetalk]

Team Wallace is prepping for Red Hills in Florida. WCTV filmed a short segment about Team Wallace’s preparations for the event, which will take place in March. Click to watch the video. [WCTV]

Eventing organizer startup EquiVentures has announced that Richard Trayford will be the new Managing Director of the company. Founded by Peter Gray and Jon Holling, the company has been growing since its inception five years ago and oversees a series of four shows at the Florida Horse Park. According Peter Gray in a new press release, Richard “has the perfect balance of business and equine experience to take EquiVentures to the next level with the excellence the community has come to expect.” [US Eventing]

Is bran mash good for horses? SmartPak’s resident vet Dr. Lydia Gray tackles the question on the SmartPak blog as part of her weekly “Ask the Vet” column. She reminds readers that while bran mashes are common feed to give during a long cold spell, you can overdo it by feeding mashes too often. Click to check out her full explanation. [SmartPak Blog]

This week on the Eventing Radio Show: Fosse Park horses, finding the right career path for your equine, and the story of Jessica Phoenix’s longtime mount Exponential. Hosts Samantha Clark and Jess Montgomery are joined first by Mark  Johnson, a man who has worked to improve the living conditions of horses bred for meat and living at Fosse Park in England. Marcia Kulak then comes on the show to talk about how she picks a career path for horses in her training program, followed by Jessica Phoenix who adds her voice to talk about Exponential’s career. Finally, Valerie Vizcarrondo gives this week’s training tip. [Eventing Radio Show]

Today’s video comes from EN friend Thehorsepesterer, and features Will Coleman and his new mount Conair at Pine Top last weekend where they competed in the Open Intermediate.