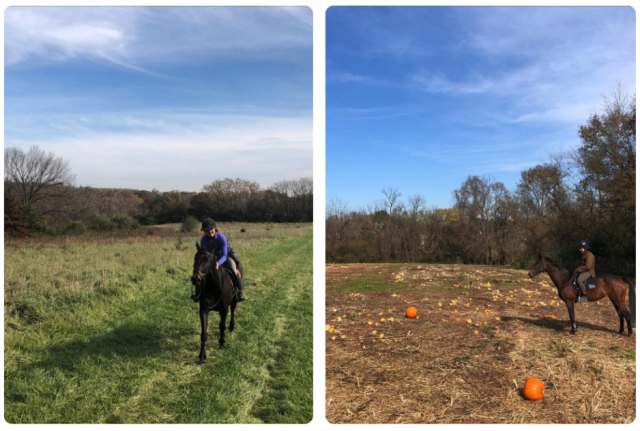 You know what’s nearly as fun as the competition season? Off-season hacking, at least in my opinion! There’s something deeply satisfying and relaxing about wandering through the fall foliage with nowhere to be in a hurry and nothing to prepare for on the immediate horizon. Looks like Ema and her mom are doing it right!

This year’s Breeders’ Cup was Lasix-free. Lasix, a drug generically known as furosemide, has commonly been used in Thoroughbred racing to prevent exercise induced pulmonary hemorrhage (EIPH) a.k.a. “bleeding”, but whether or not it’s really necessary or even particularly healthy has been a topic of hot debate. None of the 148 horses that competed in in this year’s Breeders’ Cup races were treated with Lasix before their races and there were no EIPH episodes.

Get to know Tot Goodwin and Melvin Cox. Tot is only the second Black Master of Foxhounds in the U.S. (and the only one in the U.S. today) and the first Black person to hunt in Ireland. Melvin is Managing Director of SportsQuest International and a lecturer at UCSC. The both of them are launching efforts to increase diversity within all parts of the horse industry and working towards a day when other people of color have better and more welcome experiences within the equestrian scene.

To soak or to steam … that is the question. Both soaking and steaming hay can  provide a number of benefits for horses, from reducing respirable particles to reducing the sugar content of forage. Each method share some similarities in benefits, but there are some key differences as well and a number of considerations to take into account when deciding what’s best for your horse.

Video Break: There’s a new eventing fan in town: the Governor of Maryland.