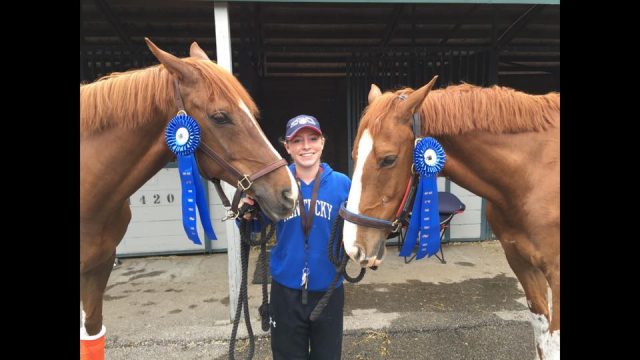 Alex Baugh with her two winners, Ballingowan Pizazz and Rock Encore. Photo via Alex on Facebook.

It’s been another busy weekend of eventing around the country, proof that the spring season is officially at its peak. Weekends like this are a score stalkers’ dream, and we’re here to fuel the fire with the latest upper level results from around Eventing Nation. We will be adding Woodside scores to this report upon completion of the upper levels later this afternoon.

The CCI1* divisions wrapped up competition today, and in the A division it was Skyelar Voss who maintained her overnight lead in today’s show jumping, jumping double clear — one of just three such rounds in the division — to finish nearly 10 points ahead of second placed pair Allison Springer and Fairvoya S on a 48.8.

Allison and Fairvoya S lowered two rails, but their score was enough to eke out second place on a 58.2, followed by Alyssa Phillips and Cooley Caviar on a 58.3.

Show jumping was particularly influential in the CCI1*-B division. Just two pairs jumped double clear rounds, including Michelle Warro and Play Like A Raven, who scooted up from 11th into second place overall on a score of 59.7.

Michelle’s finishing score was enough to tie her for first place with winner Claudia Sarnoff and Callan Quinto, but Claudia won the tie on account of her cross country time being closest to optimum yesterday. What a thrilling finish!

Other riders were rewarded with big moves up the board even with one or two rails down, which shows just how much of a shake-up this course initiated today.

Kentucky Horse Park was buzzing with action this weekend with one of the biggest Area VIII events of the year: May-Daze at the Park. With divisions from Starter up through Intermediate, there was plenty to take in all weekend.

Jonathan Holling and Sportsfield Two Doors Down are your Open Intermediate A winners, the first win at the level for the 8-year-old Irish Sport Horse mare owned by Foshay South Eventing. This pair last came fourth in the Intermediate at the Ocala International Festival of Three-Day Eventing last month. Jonathan and Sportsfield Two Doors Down finish their weekend on a score of 39.7.

Second in the Intermediate A division are Sue Jellum and Rochambeau, the best finish at this level for this pair. Rochambeau is a Connemara/Thoroughbred cross (Alladin’s Denver – Ms. Hawkeye, by Siyah Kalem) by a Connemara stallion and an OTTB mare. This pair has been together for several years, with Sue producing “Rocky” through the levels herself. They moved from sixth into second overall with 9.2 time added across country for a final score of 48.8.

Brigitte Aickelin and Evening Melody round out the top three in the A division, who were also big movers up the board, shifting from ninth place after a clear and fast cross country run.

In the Open Intermediate B, Alex Baugh and Ballingowan Pizazz are your winners, shooting up the standings from 13th with one of just two double clear cross country runs in the division. “Mango” is a former ride of Michael Pollard’s, and these two began their partnership in 2016. They’ve been quite the consistently competitive pair; they have never finished outside of the top 7 in every event they’ve completed together. The finish their weekend today on a final score of 47.8.

Bethany Hutchins-Kristen and Bronte HVF moved from fourth into second with 11.2 time added for a finishing score of 49.5. This is the highest placing at this level for this pair, who have also been together since the lower levels and have become a solid pair at the Preliminary and Intermediate levels. Nothing much better than watching a partnership grow from the ground up!

And completing the top three in the B division are Hope Walden and DHI Zatopek B, who are in their second season at the Intermediate level and continuing to gain experience and become a formidable pair. These two had the fastest cross country, aside from the two double clears, adding just 4.8 time to their final score for a 50.4.

May-Daze at the Park: Final Scores