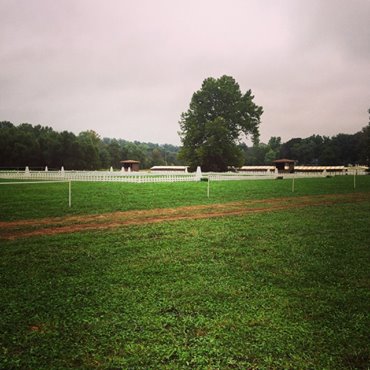 The calm before the storm at Dunnabeck. Photo via Courtney Carson on Facebook.

With the withdrawal of Mensa from the CIC3* at Poplar Place this weekend, the door was left open for Elinor MacPhail to take command, which is what she’s done after two phases.

Elinor and RF Eloquence were predicted by Maggie to finish second this weekend, and thus far they’re doing a great job keeping ahead of the pack. Predicted to finish third, Kyle Carter and Madison Park hold down second place on a score of 59.1. Hallie Coon and Namaste are currently in third, followed by Emily Rusinyak and Reatta HW. 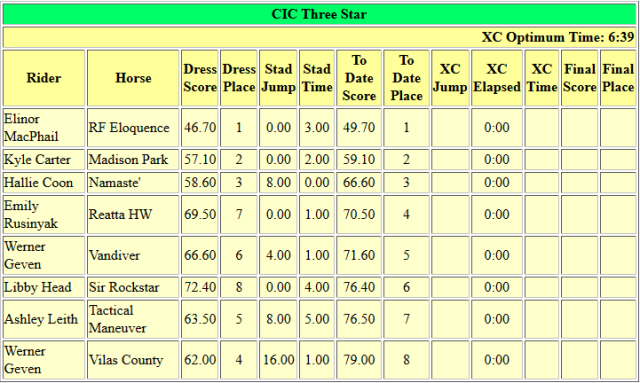 The CIC3* will run cross country today; meanwhile, the CIC* and CIC2* divisions have completed their dressage and will move forward to show jumping. Blair King and Kingsman currently lead the CIC* division on a dressage score of 45.7. A completion this weekend would be this pair’s first, and a win would surely be just the cherry on top of a great weekend!

Clayton Fredericks and FE Bowman take second place into the show jumping on a score of 47.9. This is this horse’s first start at this level, having moved up to Preliminary this year, so Clayton will be out for an educational weekend. Jon Holling and Tequila Persuasion (best name this weekend) are in third on a 49.6, also the horse’s move up to the one-star level. 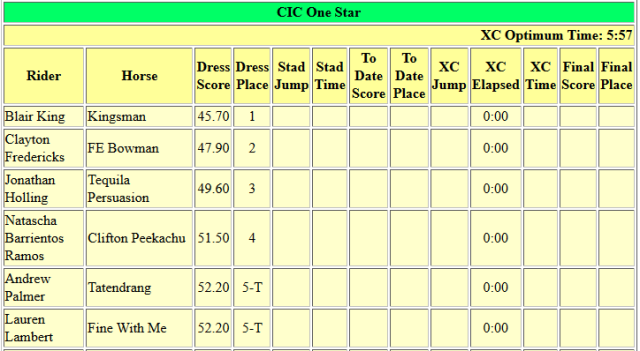 In the CIC2*, Leslie Law and Fernhill Whatever are in the lead after dressage on a score of 42.2. Fernhill Whatever, a talented young horse for Leslie, is coming off of a 10th place finish at Chatt Hills in the CIC2* last month, and the pair looks primed to improve on that finish this weekend.

Michael Pollard and Kyra, ever present at or near the top of their division, are in second after dressage after scoring a 42.9. This red-headed Canadian Sporthorse mare won her last start at this level, also at Chatt Hills last month, and is looking like a real-deal mount for Michael.

Michael also holds down third place aboard one of the Chatsworth Stud stallions, Halimey. Michael has said before that this horse’s confidence is a work in progress, but they seem to have improved with each start, only finishing outside of the top 10 once this year at the Intermediate and two-star level. 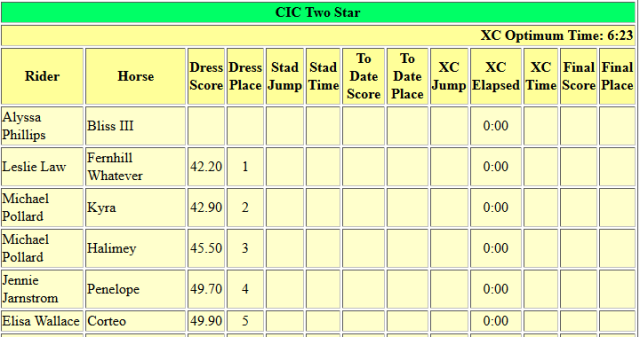 In the Advanced division, Jon Holling is leading after dressage with Zatopek B on an impressive score of 24.4, followed by predicted winners Becky Holder and Can’t Fire Me. Jennie Jarnstrom and Cape Town. Jennie and Cape Town’s last time out was the CCI3* at Bromont, so she’s likely trying to get him back out to stretch his legs after a quick vacation.

In Norman, Ok., Feather Creek Horse Trials is running an Intermediate/Preliminary division which is currently led by Eventing Dad’s own Bailey Moran and Catalyst. The pair scored a 32.1 in the dressage to take the lead over Katherine Rivera and Royal Lufftanzer.

Dunnabeck Horse Trials is also running this weekend in Carbondale, Il., with divisions from Starter through Preliminary. Scores are still updating as this event has just gotten underway, but it’s a beautiful day here in the Midwest so here’s hoping that my neighbors one state over have a great weekend of fall weather!