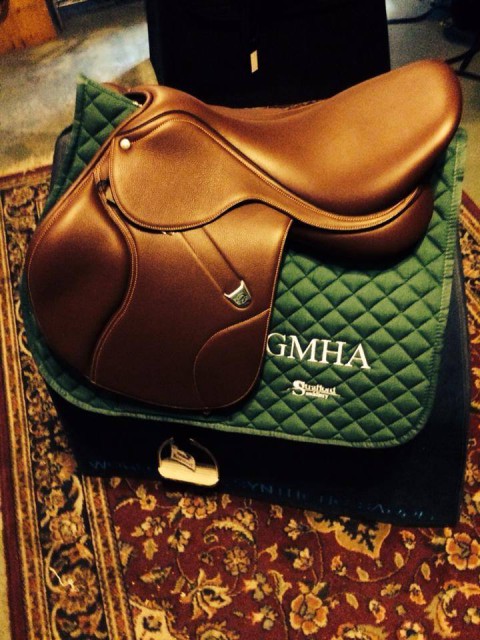 A Bates saddle up for grabs as a prize for GMHA's inaugural CIC*. Photo via the GHMA Facebook page.

Our weekend has officially kicked off, and it’s an exciting one in particular for the Green Mountain Horse Association, which is offering its inaugural CIC* division as a part of the annual Festival of Eventing.

As a part of the Festival of Eventing, both Bonnie Mosser and Bobby Costello were on hand to teach clinics throughout the week, and we’ll have some photos from that later on today. In the meantime, the CIC* division kicks off dressage this morning, and there are plenty of talented horses and riders ready to duke it out. Ashley Adams has two rides in this division: Cooley Ice and Lup de Loop, and Buck Davidson will have Mr. Bonjangles out for a run in this division as well.

GMHA is also running Intermediate divisions, with $10,000 in prize money being offered up for the weekend. Buck’s staying busy, and will take five horses around the Intermediate before the weekend is done: Riviera, Quasar, No Remorse, Be Mine, and Petite Flower. Other entries in the division include Ashley MacVaugh, Caroline Martin, and Darryl Kinney, who will also be riding the CIC* test ride.

This weekend, riders will compete in divisions from Beginner Novice to Intermediate, and John Williams’ cross country courses always promise to be a great time. EN’s very own Lindsey Kahn will be contesting the Senior Beginner Novice division with her horse, Onyx, and we wish both of them the best of luck in their second event together!

On the West Coast, everyone has been geared up for The Summer Event at Woodside, and the weekend has finally begun. This is a very large event, with divisions from Future Event Horse to Beginner Novice through Intermediate.

In the Open Intermediate, Alex Ahearn and Mai Baum currently lead after scoring a 31.7 in the dressage. Alex is coming off of a win in the Intermediate at Rebecca Farm. She leads by a small margin over Bea di Grazia and Lad’s Night Out, who is ironically enough tied with husband Derek and Ringwood Justice.

Fair Hill also has a busy event running this weekend. Dressage has just begun in the Intermediate divisions. In the Intermediate-A, Will Faudree has entered both Pawlow and DHI Colour Candy. Mackenna Shea, a recent East Coast transplant, has Landioso out for his first run since Bromont, and it’s a Pollard Eventing duel with both Ashley Kehoe and boss Michael Pollard entered aboard D.A. Vittoria and Carmac, respectively.

Michael also has two rides, Kyra and Halimey, entered in the Intermediate-B. Sally Cousins will also have Tsunami III out for a run in this division, as well as Boyd Martin with Cracker Jack and Kurt Martin with his two exciting rides, Anna Bella and Danio.