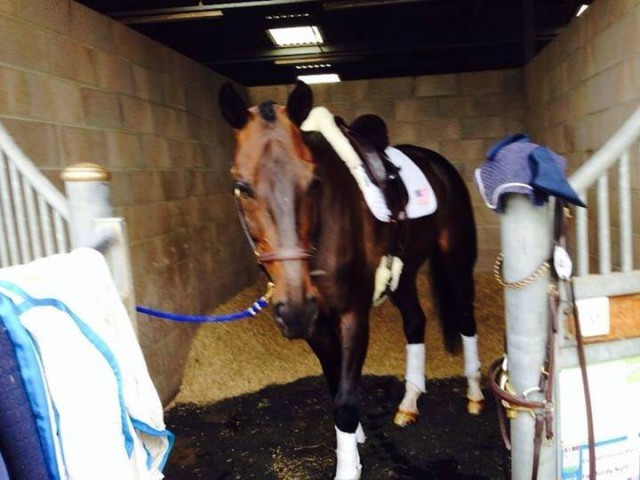 William Fox-Pitt and Parklane Hawk laid down a 35.2 in the dressage yesterday at Hatpury International. The NAF Superflex CIC3* boasts some real heavy hitters, so the competition promises to be fierce as some pairs finish up their WEG preparations and others prepare for the big fall event circuit.

Show jumping has just wrapped up in the CIC3*, where William added a double clear round to remain in the lead and take over second place with Avoca Alibi. Christopher Burton and Graf Liberty moved up from equal eighth to third after also putting in a double clear show jump round.

U.S. rider Liz Halliday and Fernhill By Night posted a beautiful dressage test to score a 43.1 and fourth place yesterday. The pair had one rail down in the show jumping to move into a three-way tie for sixth place with Coral Keen and Wellshead Fare Opposition and Sarah Bullimore and Valentino V.

Canada’s Peter Barry and Kilrodan Abbott, scoring a 58.3 in dressage and adding nothing to his score after show jumping, are getting in their final prep for WEG before they head to France this weekend.

Cross country will begin later on today, so we’ll be back with a final update from this hotly contested event. Hartpury is also running a CCI* and a CCI2* this weekend. Christopher Burton and Santano II lead the NAF Optimum CCI* after cross country this morning, and Jock Paget with Clifton Signature lead the NAF Magic CCI2* on a 42.4, with cross country getting underway shortly.

YouTube user harveywetdog has uploaded several videos from the CIC3* dressage, some of which we’ve shared below. Many thanks for the wonderful videos!

Liz Halliday-Sharp and Fernhill By Night

Jonelle Price and The Deputy