The issue of transitioning racehorses into new lives after they come off the track isn’t one that is limited to here in the U.S. — it has international scope. Thus the announcement of a newly formed International Forum for the Aftercare of Racehorses (IFAR) came as exciting news earlier this month when it was formally unveiled at the ‘Lifetime Care for Thoroughbreds: Godolphin Forum’ in Newmarket, United Kingdom.

IFAR aims to bring together the official and national operations based around the world that facilitate and promote the retraining of racehorses. It will include representatives from Australia, France, Great Britain, Ireland, Japan and the U.S., all united by the idea that working together on this challenging mission to promote OTTB welfare is more effective than working alone. The inaugural IFAR international conference will take place in October 2017.

For more information check out the full news release here.

Another way to help the cause? Rehome an OTTB yourself! Here is this week’s batch of off-track event horse prospects: 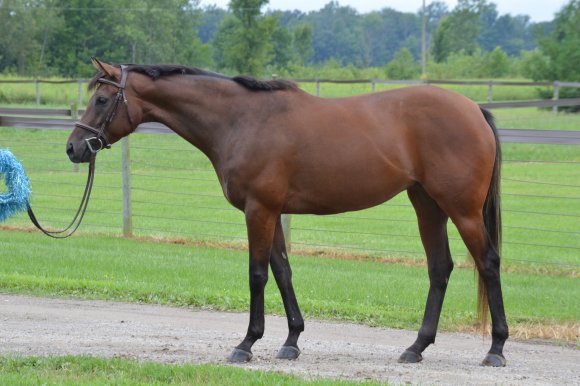 Onemorsaturdaynite (Any Given Saturday – Elleway, by Elusive Quality) is a 2012 15.2 1/2-hand mare. “Saturday” has the face of a pony with a bit of pony attitude to match in that she forwarding thinking and forward moving with confidence for her age. This video is of her third ride and she just went out and did her job from day one. Often the smaller horses are the fiercest competitors because they have a can-do attitude and are athletically built.

She had a minor bow that healed well with very little profile to it since she was given seven months off. Now ready to go back to work, Saturday will be suitable for any discipline for an intermediate level rider and up. Because she is very personable with a cute face, she garners a lot of attention — which is fine by her!

Because she spent time out in a herd of mares during her rehab time, she gets along well with any mare and knows how to handle herself in a herd situation. She is happy to graze near her friends and just be. Saturday has no vices.

String Music (Street Cry (IRE) – Contralto, by A.P. Indy) is a 16.1-hand 3-year-old gelding. If you know the classic folk song “Stewball Was a Racehorse,” you’re going to wish this one was yours! (And if you don’t know the song, click here to listen.)

His connections nicknamed him “Stu” because this young OTTB is all try. He is an avid student — although he does have his baby-brain moment — who loves to learn and wants to please. He is analytical and level-headed, has an athletic uphill build, and moves nicely. Unlike the horse in the song however, he does drink water not wine, but if you’d like to bring a bottle of Chardonnay for him when you come meet him, we’ll see if he changes his tune! 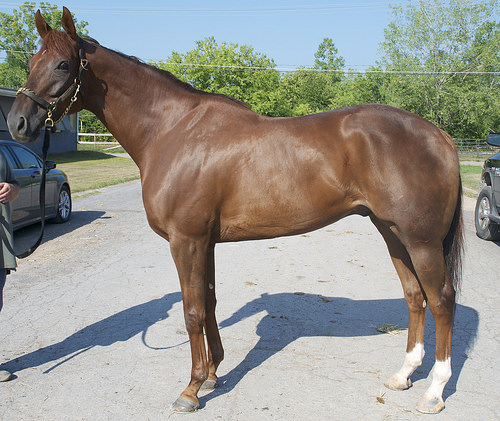 Our Brave Warrior (First Samurai – Midway Gal, by Midway Circle) was a $170,000 yearling, so his class was noticed at a very young age. His trainer reports he is excellent to work with, as well-mannered as they come. He said if he had to describe Warrior in one word it would be “intelligent.” After earning over $126,000 at the track, he is retiring sound and clean legged — a sure sign of a durable, built-to-last horse who has countless competitive years to come.

His trainer reports that he is excellent to ride and an exercise rider’s dream. While he says he would be quiet enough for a child, he also looks like he could jump the moon and be a force to be reckoned with in any arena, so he would appeal to the amateurs and professionals alike! His height combined with his build makes him an excellent choice for the very tallest of riders. He has no vices. We can’t wait to follow what is sure to be a very exciting and promising second career for this classy horse!