A well-trained small horse can feel like a luxury sportscar — the ultimate in handling coupled with swift, nimble athleticism. Here are three short-statured OTTBs we’d love to take out for a test drive! 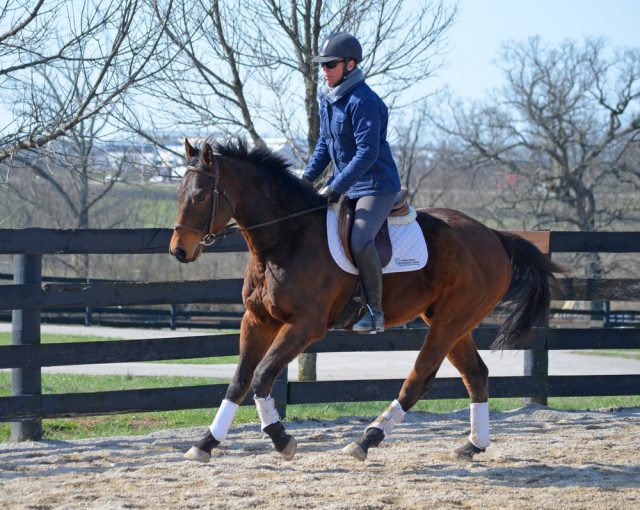 If you are looking for a little powerhouse with a big attitude and talent to match, Lovin’ Life AKA “Solovar” is the horse for you. Think Theodore O’Connor! Think Stroller the Olympic wonder pony!

This little big man LOVES to jump, is sassy, forward and bold, and delights in showing off his talents and big horseona. Not only that, Solovar has had a year’s worth of reschooling. He was headed to the Thoroughbred Makeover, but his owner had a career change and he found himself in a riding therapy facility.

Although he is kind, Solovar is a performer, not a social worker, and he found the job there too passive for his tastes. This horse wants to show off and prove that size doesn’t matter. We’re getting Solovar back in shape after a winter off but he already jumps around 2’6” courses and has completed a Philip Dutton clinic. 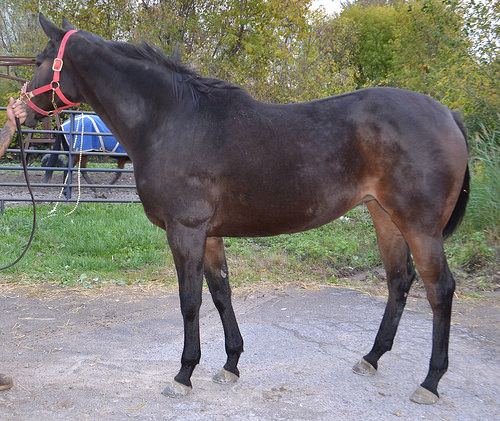 He may be little but he is mighty! This adorable and well traveled gelding has amassed a stout race record, racing and winning at racetracks from Gulfstream to the south and Woodbine to the north, and many in between. With his 54 8-9-11 record (better than 50% in the money finishes), Tyrus is the horse that every stable wants and needs to be a predictable paycheck earner, the one horse who can always be counted on to bring the money home.

He has the heart, legs and stamina to transition seamlessly to a sporting career and look adorable and athletic doing it. The trainer’s daughter (and exercise rider and pony girl) stated that she absolutely loves Tyrus, her favorite horse in the shedrow. He’s described as laid-back and easy going, does everything asked of him and is, by now, a been-there-done-that fellow. He’s nicely put together and is well balanced at the jog. We think this guy has many years of performance left in him. 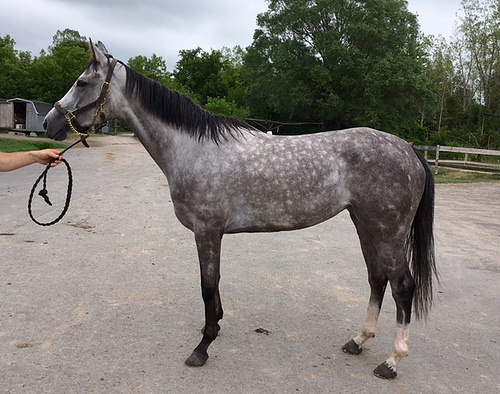 Adorable little gray fillies are much coveted, so you had better call fast to have a chance at Queen’s Gambit.  With only three starts, this daughter of Frost Giant, granddaughter of Giant’s Causeway, is showing no racing ability, but she is a clean slate for any other discipline.

She is a homebred, so you will be able to get her whole history from her owner/trainer. Her legs are clean, and he says she is sound. He also says she is a quiet and good girl. She certainly posed like a calm model for her photo session, as FLF admired her dapples, pink nose and dark mane.