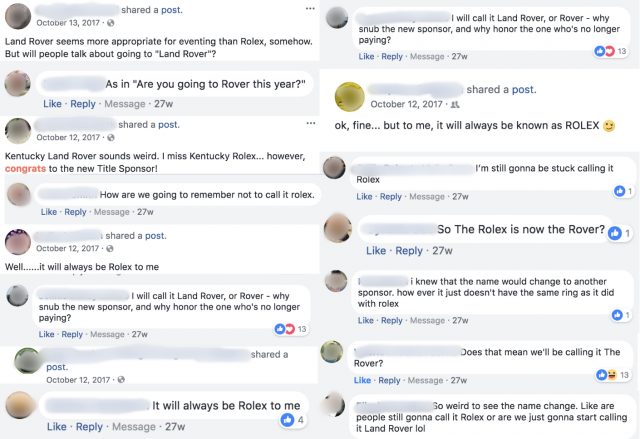 EN readers weigh in on what to call … whatever it you want to call it.

Since Rolex Watch U.S.A. signed on as title sponsor of Kentucky Horse Trials in 1981, the event’s name has become interchangeable with that of the Swiss watchmaker. The new official name is, of course, Land Rover Kentucky Three-Day Event, but all those syllables can be a drag in casual conversation. What are we supposed to call this thing colloquially?

I’ve heard a number of interpretations. There’s just plain Kentucky, which the international eventing community outside of North America has already been calling it for years. The event itself has been using LRK3DE in press releases and on social media. Others are referring to it as Land Rover or Rover, an extension of the decorum given to the event’s previous title sponsor. Some sentimental contrarians are refusing to call it anything other than Rolex. Other variations abound, my personal favorite of which is “KY Jelly Rover” — creative but seems unlikely to win the popular vote.

Here at EN, you’ll likely encounter Land Rover Kentucky Three-Day Event on first reference in a story and then something shorter and less formal after that, like LRK3DE or Kentucky. (Or maybe just a string of random emojis, who knows — things get weird in the Kentucky Horse Park press room.)

Even if we’re not calling the event “Land Rover” colloquially, let’s be sure to show them lots of love in return for the support they are showing this special event and the sport at large. If you’re Kentucky-bound this week, take the time to thank a Land Rover rep, do a test-drive, wear your LR hat, follow LR on social, or consider purchasing one as your next vehicle like I did (see “Eventing Sponsorship Matters or, Why I Just Gave Land Rover Literally All of My Money.”) They haul like a dream and make you feel like a gangster when you roll up ito the pony show, just sayin’.

We look forward to a bigger and more interactive Land Rover presence than ever at this year’s event. In addition to Land Rover’s popular driving course and tailgating competition, there will be a teen off-road driving course, mini Land Rovers for kids, canine-friendly Rover Lounges, and a fleet of vehicles creatively incorporated into the cross country course. The rider will receive a one-year lease on a brand new Land Rover Discovery.

As for Rolex, it’s still around. While the watchmaker has shifted its equestrian sponsorship focus to show jumping, it remains the official timepiece of LRK3DE/Kentucky/🚘🐴🏆💕. And its sponsorship of the Kentucky Horse Park’s Rolex Stadium, a $1.2 million deal with the state of Kentucky, runs through 2020.

“The name is new, but the Land Rover Kentucky Three-Day Event is still … The Best Weekend All Year!” You know that’s right. See you there, EN.