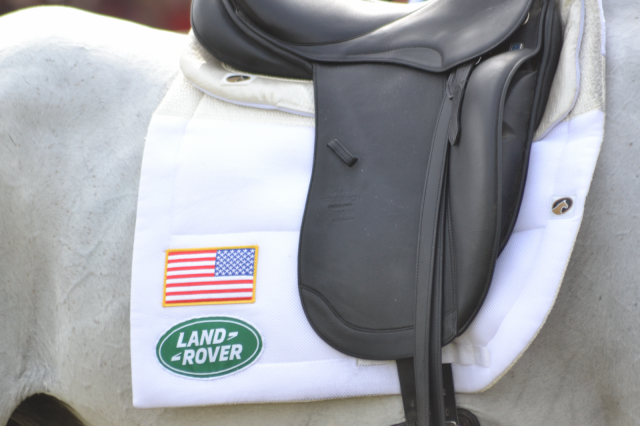 I’ve never held back on sharing with you guys how much I hate my truck. HATE. IT. Like, I feel rage boiling up inside me just talking about that dumpster fire piece of … poop.

It’s a 2004 Ford F250 with one of those notoriously lemon-y 6.0 liter Power Stroke diesel engines. It’s given me ulcer after ulcer since I bought it, and my deepest life regret is that I didn’t sink it in the lake a long, long time ago.

Recently, at long last, our abusive relationship came to an end. The guys at the diesel garage, who love me for financing their kids’ college educations, gently informed me that my truck was living on borrowed time. Transmission, turbo, fuel injectors, other assorted vital vehicular organs–they were all doing the death rattle. 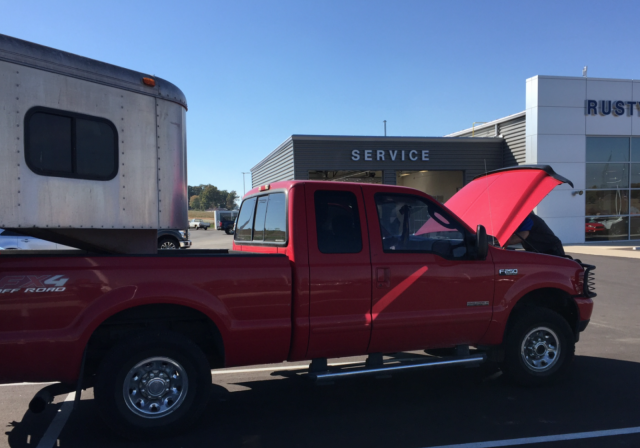 Broken down, again, on the way to an event. Photo by Leslie Wylie.

Like a divorcee desperate just to get out alive, I put my head on the truck’s steering wheel and made one last plea: “You can have the house, the kids, my bank account, all of it. Just get me to the dealership so I can trade your garbage a$$ in, preferably for this Land Rover Range Rover I really, really, REALLY want.”

I should have been more specific. The truck did, in fact, make it to the dealership; it just died right there on the spot, not even bothering to turn over when they went to check mileage on the odometer.

Well-played, truck. I hope you burn in hell.

On to the cheerier part of this story! Goodbye, truck spawn of satan. Hello, SUV of my dreams.

I’ve never been much of an autophile, nor an anglophile, but I do love me some eventing. And by extension, I guess, I like anglophile autos that love eventing. Namely: Land Rover/Jaguar. 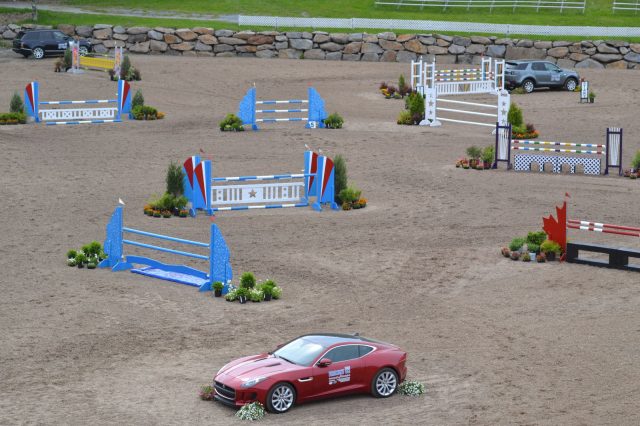 Ah, Jaguar. I distinctly remember the moment I fell head over heels in love with you. It was the Jaguar Land Rover Bromont CCI3* in 2014, where I got a driving lesson in this sweet Jag convertible. The subject: driving scary fast on Canadian backroads. I was so afraid we were going to hit a moose! But we didn’t! 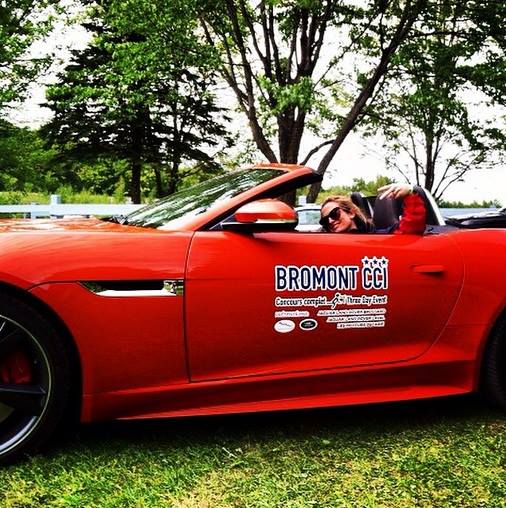 It really does suit me. Photo courtesy of Leslie Wylie.

My Land Rover encounters go back even further. Land Rover is a massive patron of equestrian sport — from events like Rolex, Great Meadow and Burghley to national teams and individual riders … 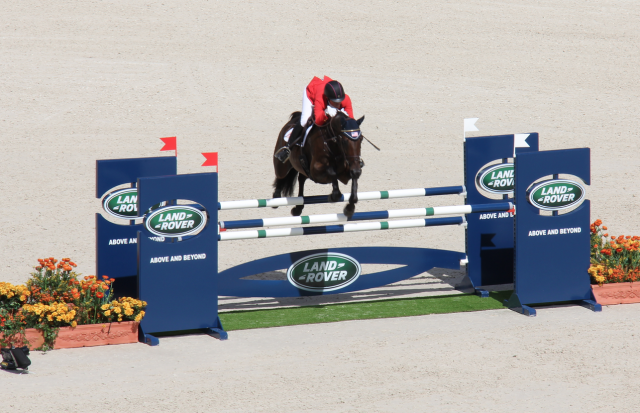 Lynn Symansky and Donner at the 2014 World Equestrian Games in Normandy. Photo by Leslie Wylie.

… and when at a Land Rover-sponsored event I always try to squeeze in a test drive. Moguls, boulders, teeter-totter bridges … the appeal for adrenaline-junkie eventer types is obvious.

Here’s a special memory from the 2016 American Eventing Championships:

But never did I ever imagine that I would actually purchase a Land Rover myself. In fact, I always accepted the sweet LR logo ballcap they give you at the end of the test drive with a twinge of guilt. The brand, I figured, was out of my league.

Until … the moment arrived when I actually needed to buy a new vehicle. And I realized that, if I had to give somebody my money, it was going to be a company that cares about and supports the sport I love. (And of course the product is not too shabby, either!)

Of course, there’s no way I could afford a new Rover. I mean, let’s be real: I write about horses for the internet for a living, so I’m pretty sure I’m nowhere near the tax bracket of Land Rover’s target demographic. But an older, higher mileage model? Doable-ish.

And thus I became the proud owner of a 2009 mafia-funeral-procession black Range Rover. I actually prefer the older, classic body style — it’s so stiff-lipped British yet sexy, like Benedict Cumberbatch. 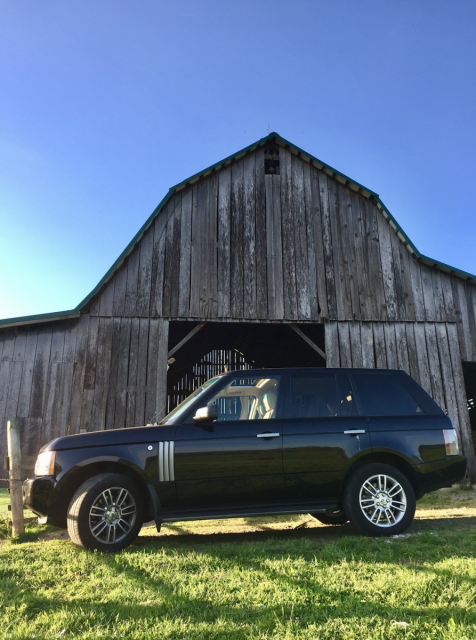 With a tow capacity of 7,700 pounds, once I get a hitch and equalizer bars on board it should be perfectly competent pulling a lightweight bumper pull. (Hauling my 14-hand pony in my old four-horse felt pretty ridiculous, anyway.) The interior is posh, albeit already well on its way to being trashed completely with dirty horse stuff, and there are So. Many. Buttons. 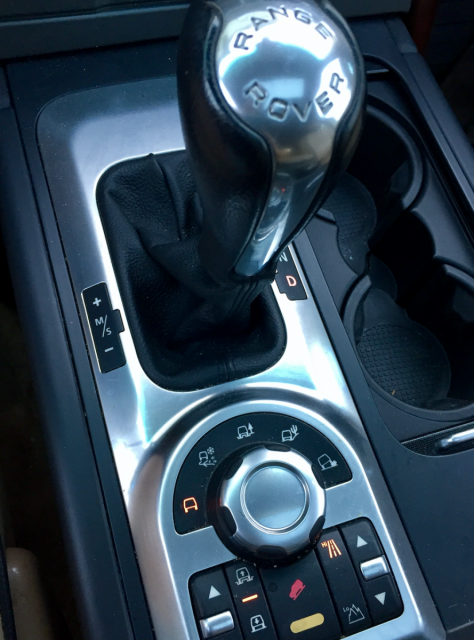 It took me forever to find the parking brake, but thanks to my extensive Land Rover offroad test driving experience I do know which mode to be in for driving off an actual cliff. Photo by Leslie Wylie.

While I’m sure it was cutting edge in 2009, the navigation system now looks a bit dated and Oregon Trail-esque, but being a “mature” vehicle has other perks. Exhibit A: six-CD changer, yo! Which I fully intend to stock with various assorted rap medleys, because rolling up to the barn in this thing makes me feel like a total gangster.

Yo, it’s all good, Range Rover all wood:

What I want Land Rover /Jaguar and other generous sponsors — of events, of riders, of horses, and even of little ol’ eventing websites like this — to know is this: Your support matters. We don’t take the effort and expense you put into us for granted. We see it all around us, and we appreciate it more than you know.

And hopefully the relationship is beneficial to you as well. Riders are consumers, just like anybody else; we all have the power to decide how to where to spend our hard-earned money. And when it comes time to make those decisions, eventing sponsors are going to be right there at the forefront of our minds.

On that note, I guess it’s time for me to start saving up for that 1980s model Rolex watch …