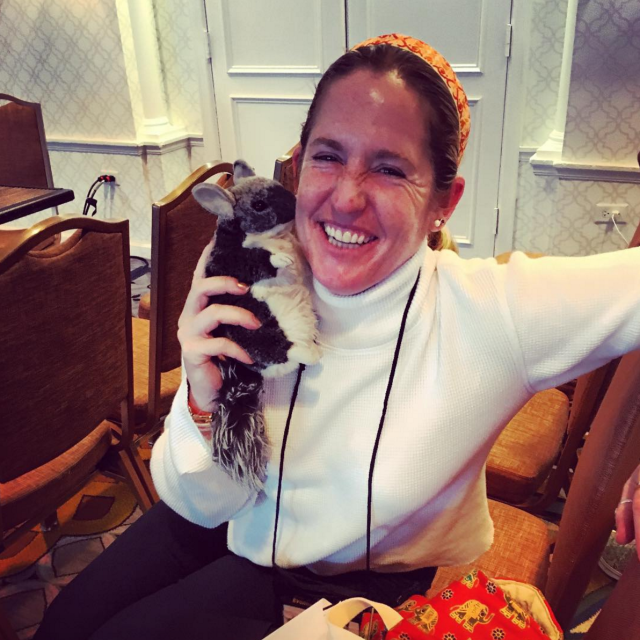 Sharon White gets some love from Chinch! We're so thrilled to see Sharon smiling and pain-free (and orange!) following her back surgery. Photo via EN's Instagram.

It’s been a busy first day here at the Omni Shoreham Hotel in Washington, D.C., and the EN team has been bouncing around to various meetings and forums to bring you all the latest from the 2015 USEA Annual Meeting and Convention. Read on for recaps of the key sessions that took place today.

Peacock irons are safe — for now

The USEF Eventing Technical Committee voted to approve seven rule change proposals in its meeting this morning. A heated debate brewed over whether to approve a rule that would prohibit peacock stirrup irons from being used on the grounds of a USEF competition. Rule change GR1301.9 states the safety risks of peacock stirrups as follows:

“In dismounting, riders’ clothing could get caught on the hook. Even more dangerously, the hook could rip through riders’ pants or lacerate the groin area and genitals. There have been several reported incidents of riders being injured by these safety stirrups and it is therefore necessary that the Federation prohibit its use to protect the wellbeing of our members.”

Those in favor of prohibiting peacock stirrups felt that there are other designs of safety stirrups available that don’t pose the same safety risks. However, some trainers said that it is difficult to find other types of safety stirrups in small sizes for young riders, whereas peacock irons can be purchased in sizes appropriate for children. The committee ultimately voted not to approve the proposal, so peacock stirrup irons are safe for now.

The committee did vote to approve to pass GR914.3, which prohibits a horse that was spun or withdrawn from an FEI first horse inspection from being entered at a National competition on the same weekend.

All rule changes related to the new proposed Modified division were tabled, as the new level has not yet been approved. It’s one of the hot topics up for discussion — and ultimately approval — during the weekend.

Waitlists and balloting aren’t going away

Event entries have increased with the upswing in the economy, and David O’Connor emphasized the importance of understanding waitlists and balloting, which will now be a reality for competitors at heavily attended U.S. events. Riders need to ensure that their entries are complete and paid in full if they want to ensure that they have a spot in the competition.

David also emphasized that USEF team selectors would be able to reserve a certain number of entries at popular upper-level competitions for the purposes of team riders, or riders who have been funded to go overseas.

The USEA Safety Committee’s closed meeting was changed to an open forum unexpectedly today, and we caught a discussion on proposing the idea of having course builders go through a certification process. At this time, course designers are responsible for the actions and jumps provided by the builders but generally do not see the obstacles until just prior to the event.

In conjunction with certification of the builders, the committee brought forth the idea of creating standards for jump construction. These standards would create minimum requirements, much like building codes, for jump construction. Highlighted in this discussions were examples of jumps used on competition courses that in some members’ eyes were substandard when it comes to rider and horse safety.

Should USEA members be allowed to choose their area?

The Membership Committee open forum covered several different topics of discussion, chiefly whether the USEA allow members to choose their area, and how that would impact the elected board of governors, area organizers and officials? It was also recommended to allow USEA members to select which area programs they wish to participate in. Additionally, it was suggested that area representatives be elected to a position in the area where they hold a primary residence.

A new CCI3* at Richland?

Those who attended the Eventing Calendar Planning Workshop were treated to a sneak peek at what the 2017 USEA calendar might look like. Among the additions on the table are a new CCI3* at Richland Park, a CIC3* or Advanced event at Live Oak, a CCI2* at the Horse Park of New Jersey in June, and a CIC* and CIC2* to July’s Maryland Horse Trials. All of these events are still pending.

The deadline to submit an event for approval on the USEA calendar is July 15, 2016. All applications to host an event submitted after that date will incur a $1,000 fine.

In appreciation of event horse owners

The USEF Event Owner’s Task Force had a packed house for its meeting this afternoon, with some of the top owners in the sport in attendance and others listening in via a conference call to discuss how to engage and show appreciation to current owners, provide resources for riders and owners looking to start syndications, and ultimately attract new owners to the sport.

Event horse ownership is in good hands with Mark Hart at the helm and a very passionate committee assisting him, and there are a lot of exciting ideas on the horizon for this topic. Stay tuned for much more on the Event Owner’s Task Force coming soon on EN.

EN superstar writers Maggie Deatrick and and Dave Taylor contributed to this report, so many thanks to them for their help today! If you missed EN’s report on David O’Connor’s first High Performance session, click here. Stay tuned for much more when Master of All Things Leslie Threlkeld joins the staff tomorrow to bring you everything you need to know from the #USEAConvention.

Don’t forget to keep checking Instagram to follow along with Chinch’s shenanigans (and to see this photo of Chinch chilling with Ms. Jacqueline Mars).