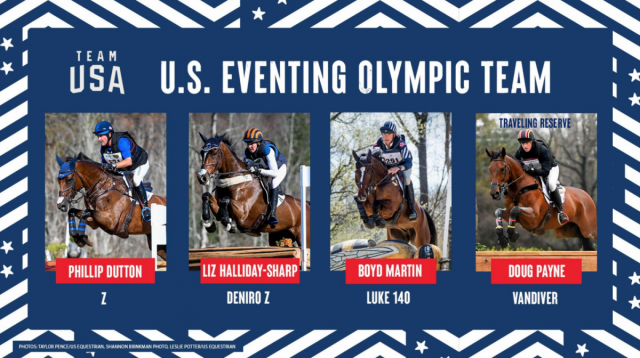 The U.S. Team’s tickets to Tokyo have been punched. What happens next?

As it has for past Olympic and WEG Games, Great Meadow in The Plains, Virginia, will serve as a mandatory outing and final prep for the Team on Wednesday, June 30, through Friday, July 2. The training session will include the three combinations named to the U.S. Eventing Olympic Team, two direct reserves and one traveling reserve, as well as the six alternates and a limited number of other international combinations. You can view the complete Team roster here.

According to the US Equestrian Olympic Selection Procedures for Eventing, all combinations on the Team will be required to demonstrate their continued preparation, soundness, and ability at the outing. It also outlines the process of substitution were it necessary due to performance or soundness issues.

We recently sat down via Zoom with Jenni Autry, USEF Managing Director of Eventing, to find out more about the purpose of the mandatory outing at GMI and the team’s path from there to Tokyo.

“The basic purpose [of GMI] is that they all needed a run,” Jenni says. “They’ll all work on specific goals with [Chef d’Equipe Erik Duvander] during the competition in order to be ready. Ultimately the goal is to be the best prepared they possibly can be during the Olympics. It is set up like a competition and there will be live scoring, but fundamentally it’s technically a mandatory training session.”

In addition to the U.S. roster, Team members from Canada, Brazil and Puerto Rico are invited to attend Great Meadow. “In the spirit of the Olympics we were happy to invite them to participate,” Jenni says. (We do know that Puerto Rico Olympian Lauren Billys won’t be participating but will instead fly directly to quarantine in Aachen, Germany.)

As for Virginia’s notoriously hit-or-miss summer ground, Jenni says, “It’s a consistent issue in the summer in this country as far as the ground being hard, that’s a reality we have to face, but realistically the horses have to run before going to a championship,” she says. “We looked to a venue that we knew we could work with to be able to prepare the ground, and Great Meadow has gotten better every year as far as footing prep. They run one of the top 4*S in the country so with that being six weeks later (Great Meadow International – Aug. 18-22) we felt it would be a good venue to have the final run. It’s a much shorter track, about five-and-a-half minutes, so it’s able to be laid out to get the best of that ground.”

A trot-up will take place at 5:30 p.m. on Wednesday, June 30. Dressage will begin at 9 a.m. on Thursday, July 1, followed by a cross country phase beginning at 2 p.m. the same day. Show jumping will begin at 10 a.m. on Friday, July 2. This event will not be open to public spectators and will not be livestreamed.

Regarding the closure to the public, the event was easier for the organizers to plan logistically without having that element, but they’re encouraging as much media coverage as possible. Kate Samuels will be covering the event for EN, so please check in here for all the latest updates!

Following the outing, the horses will be staged at Gladstone in New Jersey in preparation to fly on July 8. “All fitness work is to be done by the time they leave,” Jenni says. “They’ll have access to gallops but they are not intended for actual galloping. Erik has been very clear that that all needs to get done before they get on the plane.”

From there, the team will travel to a Pre-Export Quarantine in Aachen, Germany. The facility will function as their final training camp where we will be working with dressage judges and as well as Peter Wylde for show jumping.

The first and second alternates, Tamie Smith with Mai Baum and Will Faudree with Mama’s Magic Way, will travel to Aachen with the team and will have the option of staying to contest CHIO Aachen on Sept. 17-18.

Olympic eventing will begin July 30 and continue through August 2, 2021, at the Equestrian Park and Sea Forest Cross-Country Course venues in Tokyo.

Best of luck to all! Go Team USA, and Go Eventing.