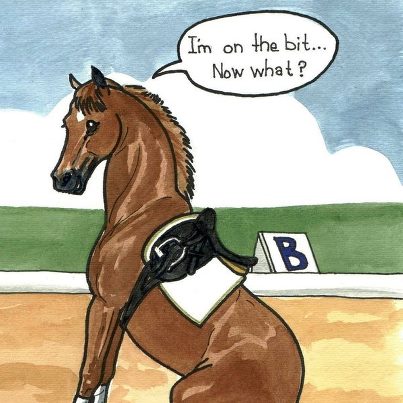 After many years of competing in the dreaded rectangular sand pit of jangled nerves and inexplicable acrobatics, I have learned a handful of things about both success and complete failure within the arena. First up: flower boxes are always terrifying, especially when you pass them for the third time going to the left. Second: despite the many times I have memorized dressage tests, ridden past the letters, and correctly executed complicated movements, I cannot for the life of me accurately name the proper letters off the top of my head. I’m aware of the fact that you enter at A, and you turn at C, and I know the middle ones are B & E, although you probably shouldn’t put a gun to my head and ask which side is which….

Despite being an upper level rider, this alphabetical puzzle continues to plague me, and I hope that I’m not alone, so I have compiled a list of helpful (?) mnemonics that other competitors have created in order to help them remember the order of letters. I also hope that I’m not alone in using the phrase “funny letter to funny letter” to describe that weird short diagonal that you get in the upper level tests in the big arena….anyone??

“All King Edward’s Horses Can Make Big Farts” – courtesy of my very first Eventing coach, Mary Grantham, who desperately tried to help me remember by using the word fart.

“A Fat Bay Mare Can Hardly Ever Kick” – for those of you who like reading the book from right to left, this mnemonic goes the other direction.

“All Kind Elephants Have Cute Mothers Bad Fathers” – I think somebody spent a little too much time daydreaming about Dumbo in the Dressage arena….

“A Kitten Entered Here Calmly Munching Bad Fish” – God knows if an actual kitten entered my Dressage test, calm would not be the adjective one would use to describe my horse

“All King Edward’s Horses Carried Many Bloody Fools” – this one is probably the most true of all, for King Edward’s horses were certainly carrying bloody fools into battle

“All Kangaroos Enjoy Hot Coconut Milk Before Freaking” – I’m going to go ahead and chalk this one up to our funny friends down under…..and I’m not going to ask what a kangaroo looks like when it is “freaking”

“All Kicking Equines Have Caused Many Bruised Fannies” – this one was made in Pony Club, don’t you think?

So, Eventing Nation, what’s your method for the madness? Do you have an epic mnemonic? Do you just wing it, and do funny squiggly lines with your fingers before you go in? Tell me your secrets, because I certainly can’t seem to figure out which funny letter is which.