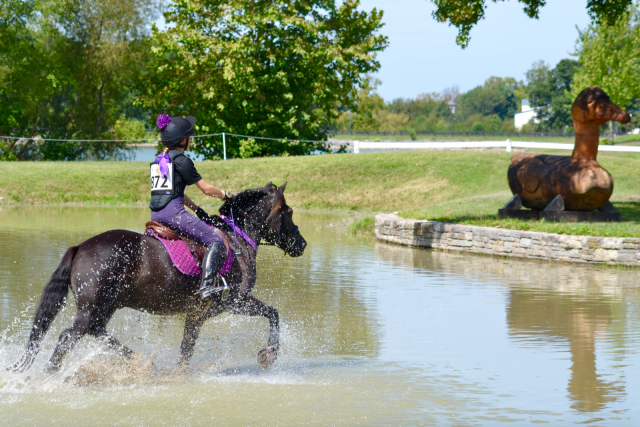 Cross country leaders Maren Hanson and In My Feelings splash their way across the Head of the Lake. Photo by Leslie Wylie.

The Head of the Lake was, as it is on a certain Saturday in April, the best place for sightseeing today at the 2019 American Eventing Championships. This iconic complex, rumored by some to be filled with holy water, has anointed the hooves of countless eventing legends and traversing it was the thrill of a lifetime for hundreds of riders this week.

While the Lake did wreak a bit of havoc upon the higher levels, it caused only a few spots of trouble for the Beginner Novice set. It was the gateway to the course’s homestretch, positioned just five fences from the finish line and headed toward home. While it was a straightforward splash-though question, it got a big reaction from riders who whooped and hollered their way across.

Scroll down to the bottom of this post for a special video edition of “Who  Splashed It Best? AEC Head of the Lake.” But first, your Junior Beginner Novice Rider 14 & Under cross country report!

‘Mighty’ Maren Hanson, age 12, added nothing to her dressage score of 28.3 to retain the lead overnight with In My Feelings. Yesterday Maren told us that she bought “Drake” out of a field a year ago as a Pony Club games prospect, not realizing until later that he was 24 years old. His past was a mystery but it seemed like he might have had some dressage and jump training, so Maren decided to give eventing a try. They qualified for the AEC in three outings and now here they are, leading a 36-strong field at the biggest event in the land.

“He was very, very good,” Maren said of their round today. “He was very positive with everything. I really liked the colorful jumps, those were really fun.” 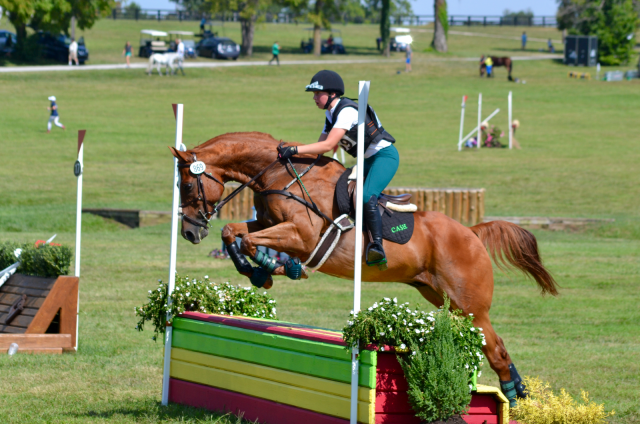 Sydney Langley and Pocket Change are picture perfect over the Fiesta Table (also affectionately known as the “Skittles Table”), a staple of KHP BN/N courses. Photo by Leslie Wylie.

Tessa Geven and Tullymor’s Houdini, a Connemara gelding owned by Werner, are still in 2nd on 28.9. This pair is one of our show jumping powerhouses — they haven’t had a penalty in their past 11 events, and we don’t expect them to sully that spotless record tomorrow.  Molly Hunt moved from 4th to 3rd with Falcons Grey Bar, her own paint mare, on 29.4.

The 14 & Under scoreboard saw 30 — count ’em, 30! — double-clear cross country rounds today. It didn’t do much to shake up the standings, but it did make for a whole lot of finish line smiles.

Speaking of things that make us smile, how about Jr. Beginner Novice 14 & Under cross country fashion? #matchymatchgoals Also, and I know it’s a controversial subject, but it’s great to see helmet pompoms making a big comeback out there! 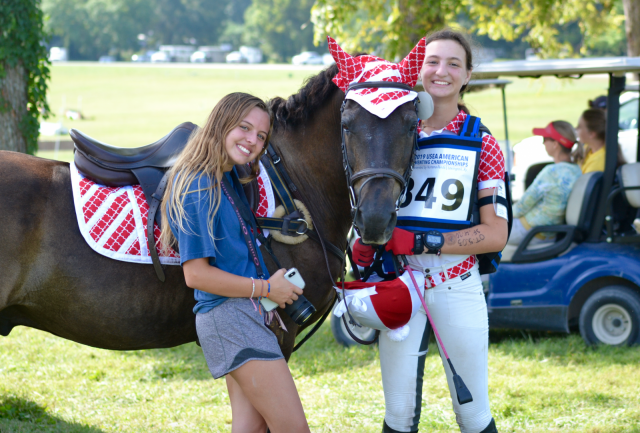 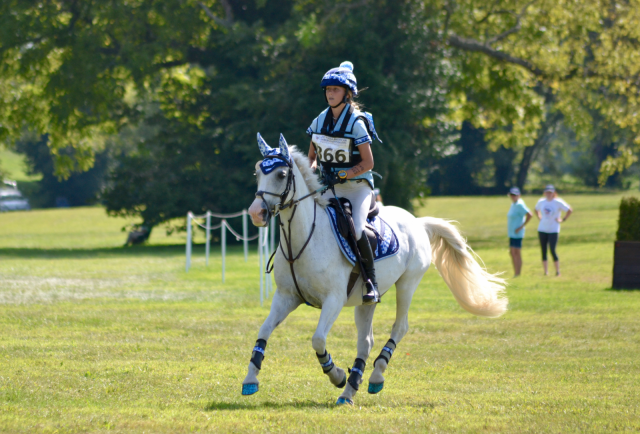 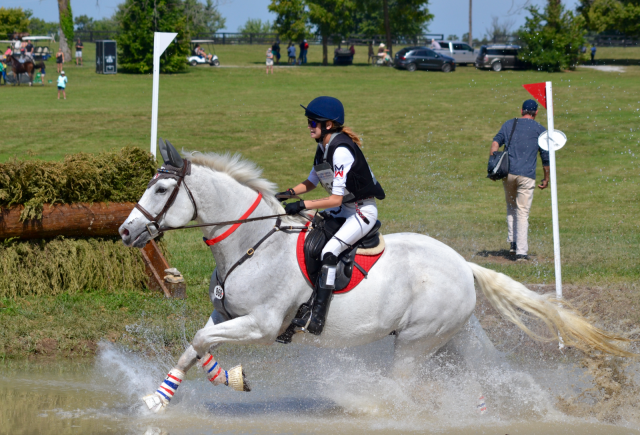 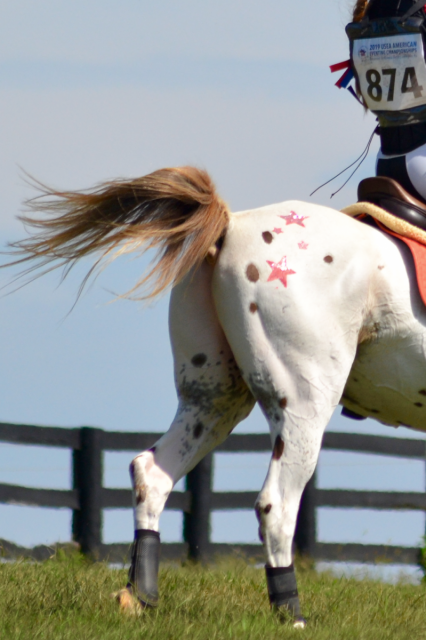 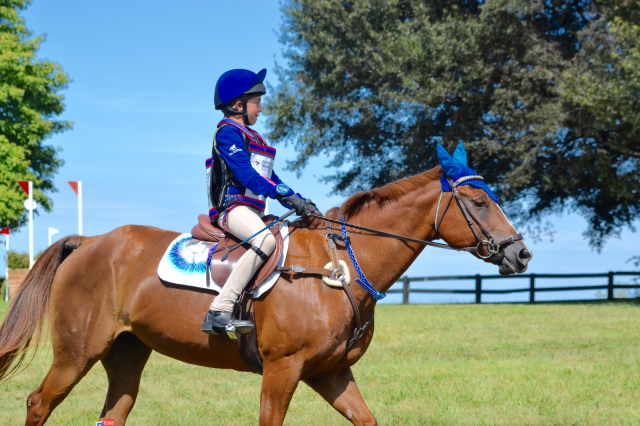 Wait … what is that on Kloie’s saddle pad? 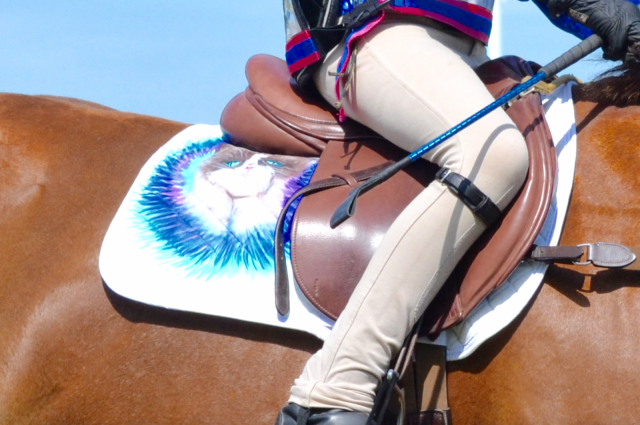 We are for it. Photo by Leslie Wylie.

Even volunteers were getting in on the statement piece action. 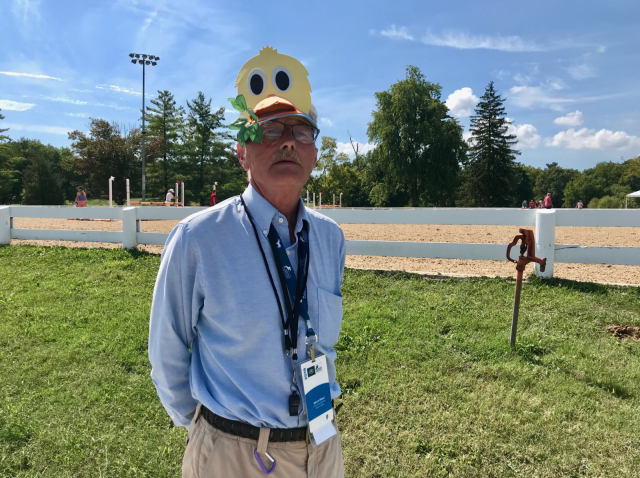 Mind the duck! Spencer Millard, gentleman crossing guard extraordinaire, has been volunteering at the Kentucky Horse Park since 1999. Photo by Leslie Wylie.

Alright, now for that special video edition of “Who Splashed It Best?” as advertised. The final five riders of the division exhibited a variety of strategies and lines, but they all displayed a positive, determined ride. Watch and decide who you think presented the best picture — or, heck, even just who had the best cross country outfit if you can’t decide — and vote in the poll below.

Did you hear? Beginner Novice show jumping will be live streamed tomorrow! Go watch from 7:30 a.m. to 6:30 p.m. on the USEA website here. 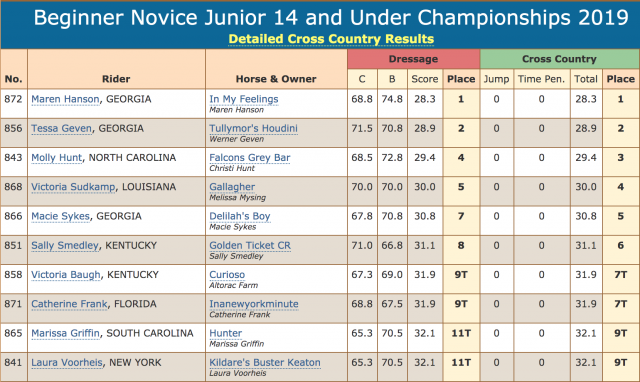