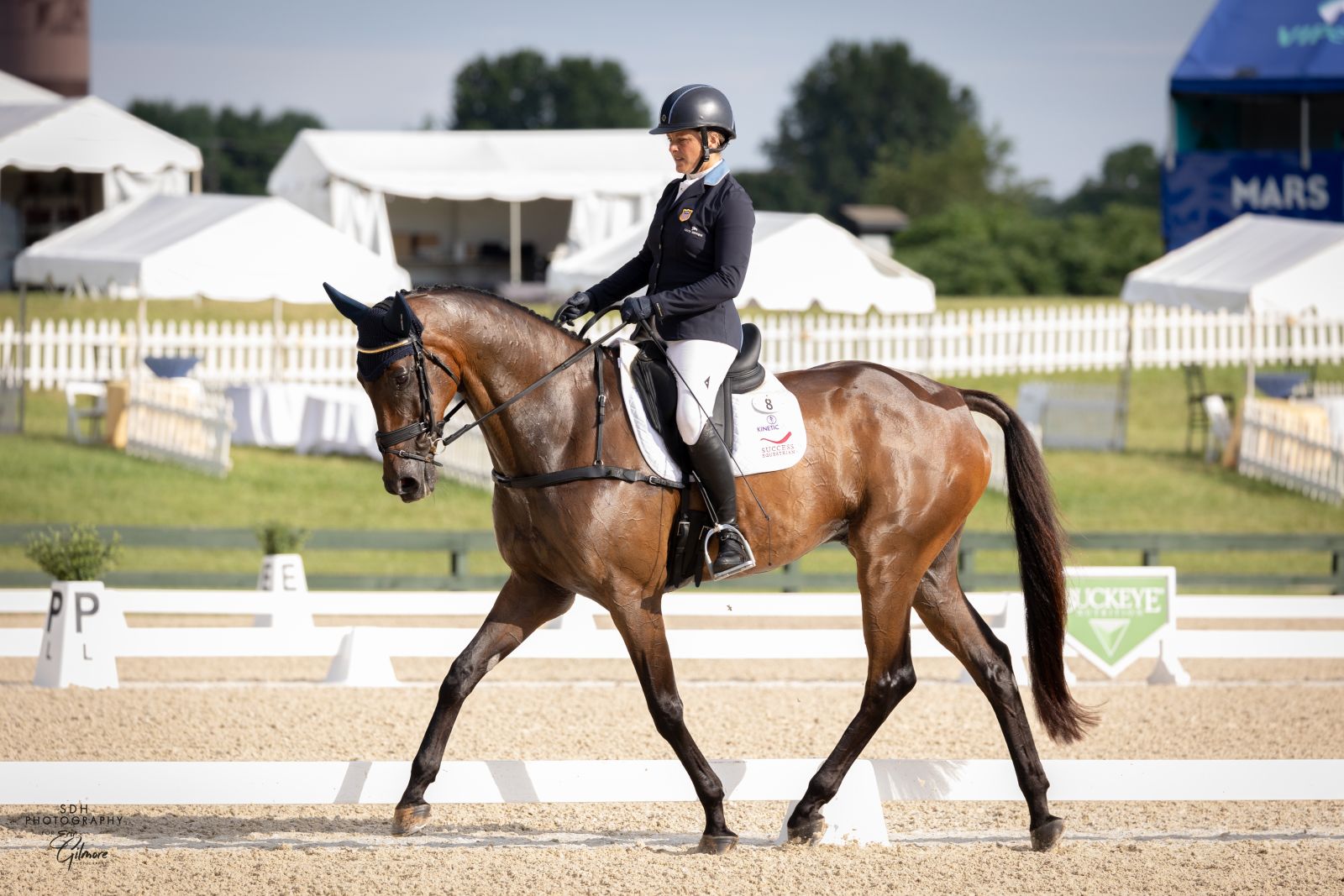 It’s a question Lynn Symansky’s had to answer a lot this week, and we’re only through the dressage portion of competition for the Preliminary horses and riders competing here at MARS Great Meadow International. We’ve not seen Donner, who is 18 this year, if you can believe it, since the 2018 FEI World Equestrian Games, but it’s not for lack of wanting to compete.

“He picked up a soft tissue injury after WEG, and we had him ticking back along by that next fall,” Lynn explained. “But then Covid happened, and he’d done so much that it really didn’t make sense. He really owes me nothing.”

Lynn instead focused on her up-and-coming horses — and her own self — in 2020, keeping Donner going at home but not putting any pressure on competing him. Over time, Lynn had accumulated several injuries and wear-and-tear issues that necessitated treatment, so after Tryon International in November she underwent a major surgery to do core repair, hip resurfacing, and repair to a labral tear in her shoulder. “I think Boyd and I went in to the same place on the same day to have our surgeries,” Lynn laughed.

The surgery, which would ordinarily be broken up into two, kept Lynn out of the saddle for a few months. For Donner, it was a case where not just anyone could take the reins and keep him going. “He’s a tough horse to just put anyone on,” she said. “Kendyl Tracy had been his groom and best friend for many years, so I sent him down to Florida a little early so she could keep him going. There aren’t a lot of people who would be able to ride that horse, but she knows his every quirk.”

Lynn began competing again in April, but she took her time deciding what to do with her old friend. Great Meadow is a bit of a home event for her, with her home base just a few minutes down the road. With a good amount of rain treating the ground here in The Plains over the last few weeks (and including today), Lynn felt it might be the perfect time to bring Donner out for a leg stretch.

“He kept darting back and forth in the trailer box stall to see out each window as we pulled in,” Lynn laughed. “It was adorable. He was so excited to be here. But I think he was a little confused about doing the Prelim dressage test!” 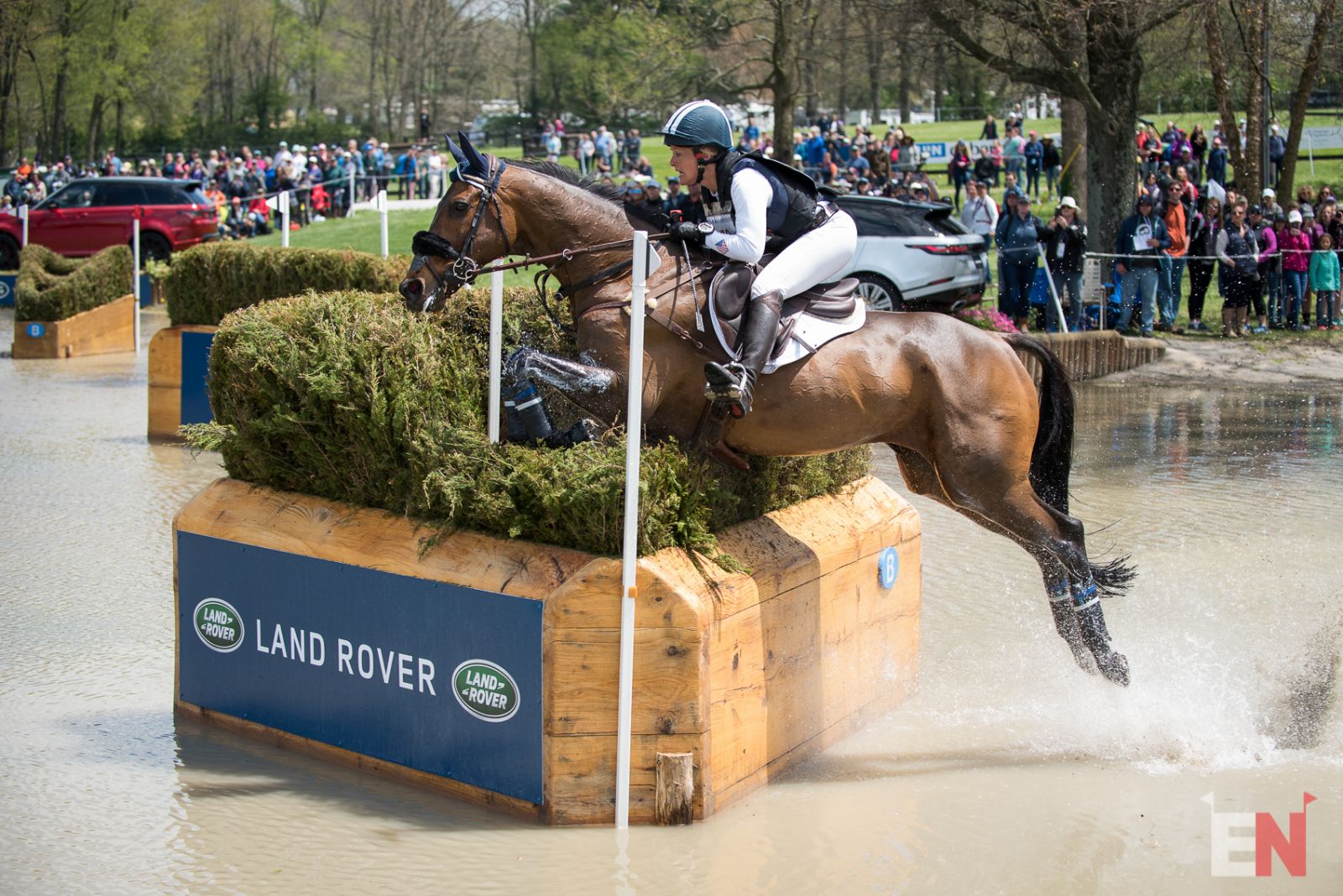 Donner earned a 26.5 in the Preliminary yesterday to sit third early on. Of course, this isn’t exactly a competition Lynn is planning to go out and blow it out of the water — for her, it’s an opportunity to enjoy her friend and a slightly less busy competition weekend. Donner is her only horse here this weekend, and she’s also joining H&C+ for the live stream of the CCI3* and CCI4* as a commentator.

“Its a funny transition when you have them in the beginning and get to know them and their quirks,” Lynn said. “Then you get into the serious part of it, where sometimes you have to make the switch to going out and getting the job done. And now it’s sort of nice to have that pressure off and go and enjoy him in a different way. He’s been such an incredible partner.”

Lynn laughs as she describes walking the Prelim cross country: “Normally I’m walking Prelim for my younger horses and walking this for Donner I think, ‘Oh my god, it looks so small!’ So we’re just going to have a nice canter around. I have no idea what he’s going to be like!”

As for herself, Lynn says she’s feeling fresh and fit again after her surgery. “Everyone deals with this sort of thing and it had just been stuff I had been putting off,” she explained. “We press on and you keep going and it was affecting my riding. I knew I needed to get it taken care of sooner rather than later.”

Lynn says she has no agenda for Donner right now, reiterating that he owes her no debts. “If he keeps ticking along, I will aim him at something this fall, but I’m just seeing how it goes for now,” she said.

No matter what, we’re happy to see “Donner the Deer” back out doing what he loves and will always be appreciative any time we get to see this well-worn partnership in action.