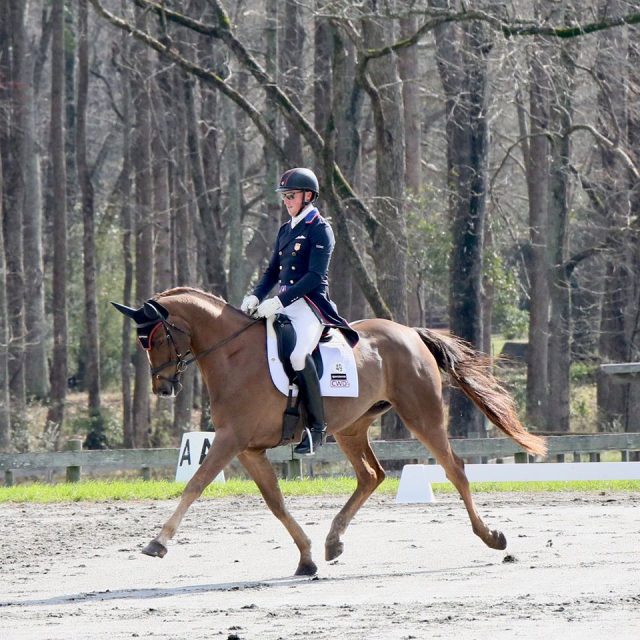 Each February, Pine Top Farm plays host to one of the very first premier events on the East Coast eventing scene. Year to year, their Advanced H.T. entry list reads as a who’s who of the upper-level scene and offers competitors the opportunity to strut their stuff early in the season and assess their mounts ahead of the marquee spring events that are now coming up in just a matter of months.

The Thomson, Georgia area, where Pine Top Farm is located, has experienced some heavy rain earlier this week and the organizers have smartly shifted the event schedule around in an attempt to let the footing dry out before the cross country phase is run. (By the way, anyone competing on Sunday should make sure to double check the schedule and their times for tomorrow after 7 pm today!) Cross country for the Advanced and Intermediate levels was rescheduled from Friday to midday today. With that, dressage and show jumping took place for these levels yesterday.

Let’s take a look at the current Advanced leaderboards (there are three splits!) after the first two phases and say hello to some familiar faces that are out and about this weekend: 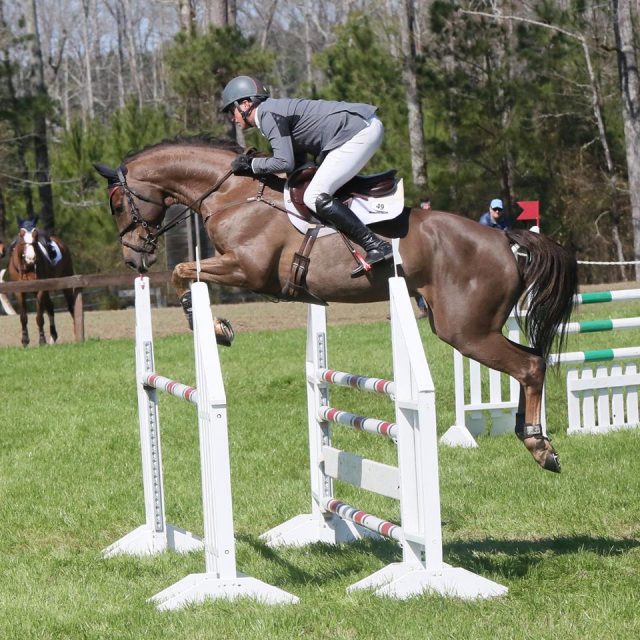 We’re delighted to see a number of familiar equine names making their Advanced level debut this weekend. None other than Starr Witness, Doug Payne‘s gold medal winning 2019 Pan American Games mount, is leading currently leading the Advanced A-A division in her first appearance at this level. The pair scored a very impressive 23.80 in the dressage — the lowest score of all three Advanced divisions this weekend — and will remain on that score heading into cross country today having jumped a dazzling double clear over a Chris Barnard-designed show jumping course.

The “Ginja Ninja” and Doug are a good seven marks ahead of the second place horse and rider in their division, Liz Halliday-Sharp with Cooley Moonshine, another Advanced level debutante, who sit on their dressage score of 30.70. The top three in this section is rounded out by Annie Goodwin and Fedarman B with a 32.30, having also show jumped double clear. 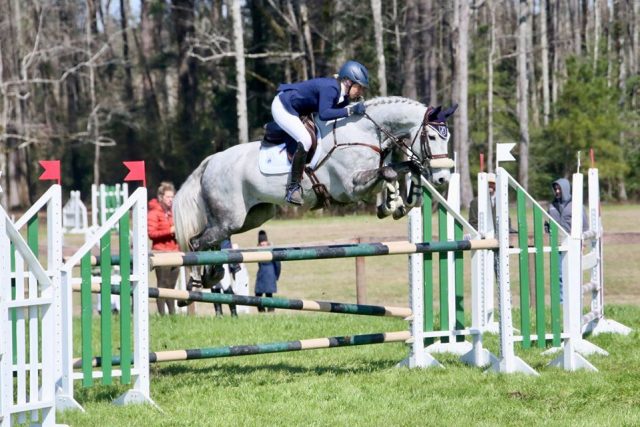 Liz Halliday-Sharp makes another leaderboard appearance in the Advanced A-B division with Cooley Quicksilver — who won one of the Advanced divisions in last year’s H.T. — posting a personal best dressage score for the horse at the Advanced/ CCI4* level with a 24.80. The pair show jumped just one second over time but left all the poles in the cups so they will head into cross country with a score of 25.20. Can they make it back-to-back Pine Top wins?

Two more horses making their Advanced level debuts take the second and third positions in this division. Trendy Fernhill with newly engaged Jenny Caras (congrats Jenny and Waylon!) sit on a 28.80 and Mama’s Magic Way and Will Faudree are hot on their heels one penalty point behind. 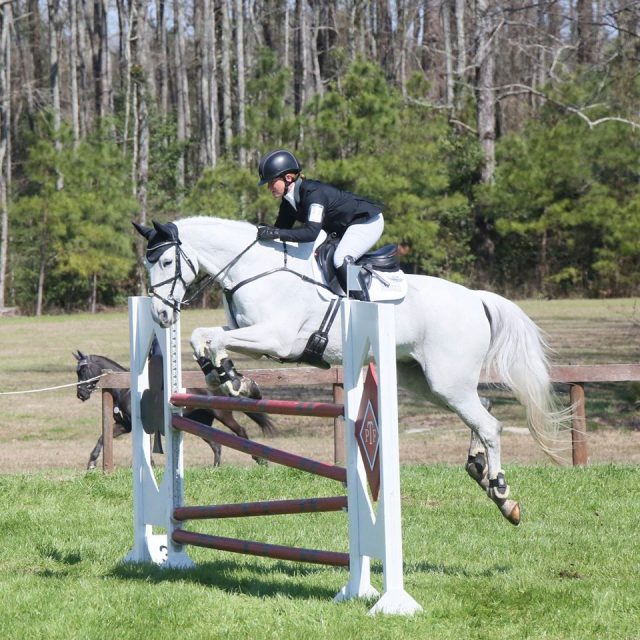 The third Advanced split, the Advanced B division, is led by Emily Beshear and Olney Uncle Sam on their dressage score of 26.10. Not far behind them with a 28.60 lies Canada’s Colleen Loach and her 2016 Rio Olympics mount, Qorry Blue D’Argouges. Our USEF CCI4* National Champions Erin Sylvester and Paddy the Caddy round out the top three on a 32.30.

Pine Top Advanced H.T. isn’t just Advanced divisions, of course, and it’s a jam-packed weekend of eventing at the farm. Here are the leaders of the Intermediate divisions, who also did their dressage and show jumping yesterday:

Many, many thanks to Mary Patricia Stone for the beautiful photos featured in this report. Cross country day at Pine Top starts right about now with Advanced kicking off at 11:00am, followed by Intermediate at about 1:30pm. Here’s wishing safe and speedy rides to all. Stay tuned for post-cross country reports! 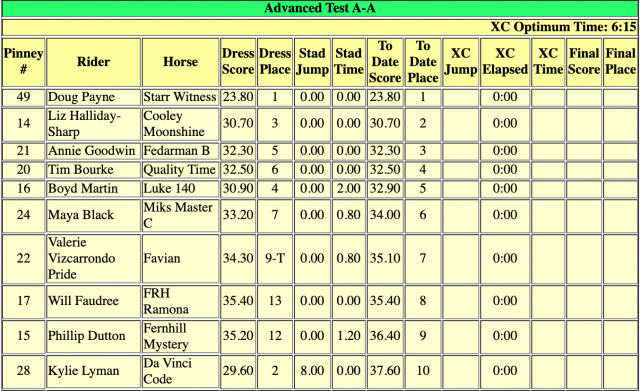 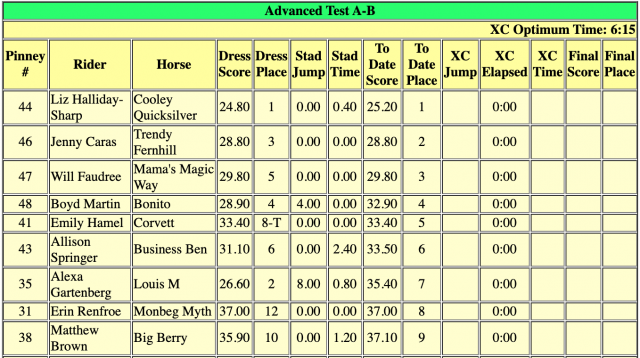 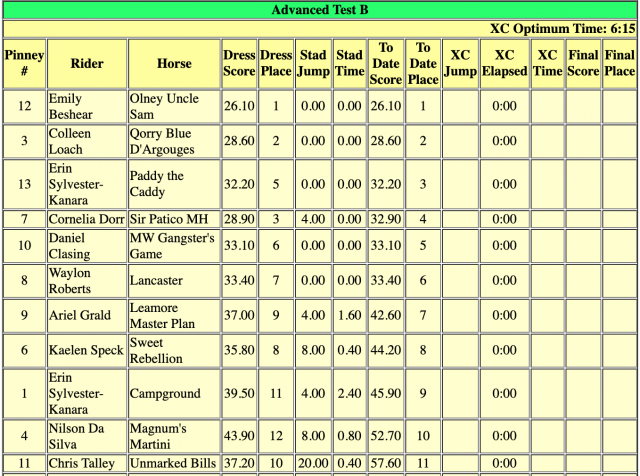