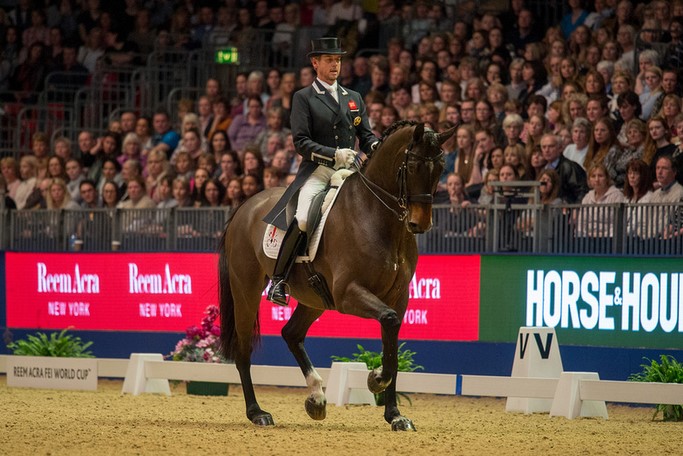 Equestrian coaches and horses round the world have much for which to thank Carl Hester. All coaches need verification of their methods to sell their training ideas, and what easier sell is there than to say ‘this is how the gold medalists do it.’ Charlotte Dujardin with Valegro have been the leading combination in the dressage world for two Olympic cycles, and without doubt it is the brilliance of Carl Hester’s training leadership that took the British team to a gold medal in London and silver medal in Rio, and has broken new ground by turning a British rider into the highest scoring rider of all time.

So how does he do it? Here are the 10 key points he uses to explain his approach. It is important that you read through all 10 points and the all-important final conclusion to fully understand his strategy and magical effect.

2. Be patient. Do not destroy the tranquility of horses by demanding a performance that is too difficult, or by demanding it too early in training.

3. Be tactful and resourceful. Take advantage of the most favorable conditions for teaching a horse a new lesson. Never try to train a fresh horse. Undertake nothing new when the horse is excited or frightened. Do not try train the horse when his attention is distracted. Do not give a new lesson to a resisting horse. Do not send the horse to the stable in the midst of resistances or with a lesson incomplete. Finish the lesson first and then send the horse away calm and tractable.

4. Be moderate. Begin with the simplest movements and exercises. These understood, proceed to the next, less simple. In the early training introduce nothing complex or difficult. Use continuously the same means to bring about the same results, thus aiding the horse’s memory. Ask little but ask it it often; it is by repetition that a horse progresses. Nevertheless, do not let a horse continuously execute a movement incorrectly or in a dull, lifeless manner. Demand attention, correctness and a carriage and action gradually increasing in style and manner, then allow a few moments of complete relaxation. Never strain the attention or tax the strength of the horse. Require no position, attitude or movement which in itself causes the horse apprehension, discomfort or pain.

5. Be observant. Do not attribute every resistance of failure of the horse to inattention or stubbornness. These are often due to ill fitting bits or saddlery, to a poor rider, to lack of condition or approaching unsoundness, to noises, unaccustomed surroundings, or even to the weather.

6. Be exacting. Do not be content with the simple tracing of the riding-hall exercises and figures. Every such exercise or riding-hall figure has for its object to teach the horse the aids and to know how to handle himself in doing so. Accordingly, before taking the first step of a movement, the horse should be placed in a position which favors the simple and natural execution of the movement. The movement will then be executed more easily and correctly.

8. Be liberal. Permit the riders to ride the greater part of the time at will, or, if on the track, without regard to the distances. They then have a greater opportunity to really control and to correct the attitudes, positions and movements of their horses. It also permits the horses to assume their individual natural gaits and avoids irritation by forcing them too soon to take regulation gaits.

9. Be tenacious. Never provoke a struggle which can properly be avoided.

10. Summation. In the horses’ training, great attention should be paid, first, to their conditioning; second, to their tranquility; third, to their training, properly speaking. ANY SYSTEM OF TRAINING THAT NEGLECTS THE CONDITIONING OR WHICH DESTROYS THE TRANQUILITY OF HORSES, IS DEFECTIVE.

Those of you who read my last article may well be smelling a rat at this stage. I lied to you! These 10 points come not from Carl Hester in 2017 but from the U.S. Cavalry Manual of Horsemanship in 1936! They come from the beginning of Part II, Education of the Horse … and bear in mind the manual is not talking about training dressage horses but training remounts to serve in the USA cavalry.

So who was fooled? Some of you I would guess. So why have I done this? It is not just because I admire both the work of Carl Hester and General Chamberlin, who largely wrote the Cavalry Manual. My point is that so much in the Cavalry Manual is forgotten or lost, and so much from other wise coaches is also lost, therefore coaches who study their subject have much to gain and then much to contribute to the training world…. and then we can avoid the need to keep totally reinventing the training bicycle. Improving definitely, and always simplifying, but not reinventing. Yes there are some things I don’t agree with in the Cavalry Manual but there is much that is both good and mentally stimulating.

Of course we are lucky to be blessed with a huge amount of film of Carl and Charlotte, so there is a better record than with many master trainers from the past. Therefore there is every chance that Carl’s work and words will not be forgotten, but instead remembered and used to show the way to the next generation of riders who want to ride dressage in a kinder, better way….. a way that is undoubtedly safer for event riders who need a horse to have good instincts across country.