William Micklem returns today with the third column in his series on the subject of happiness, which has resonated with many EN readers around the world. If you missed them, click here to read part 1 and here to read part 2. Thank you to William for writing, and thank you for reading. 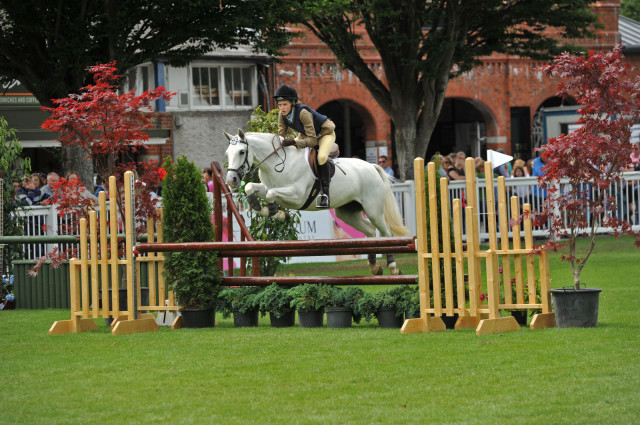 Storybook perfect. A young girl on her Connemara pony at one of the biggest shows in the world, Dublin Show at the Royal Dublin Society showgrounds. Holly, my daughter, loves her pony, Sunny Girl, who has been a major part of her life for the last three years. Bought as a 4 year old, they have grown up together and this summer Dublin Show was the competitive highlight of their relationship.

I use the word ‘relationship’ intentionally, because to Holly it is their relationship that is the best thing about riding Sunny, and without doubt it is a two way street of mutual respect, enthusiasm, freedom and happiness. This enhances everything they do together and there are lessons here for adults who may be more correct, but also more controlling and mechanical in their approach to horses and more focused on competition success. As a result they often have less happiness in their equine relationships and ironically less competition success. 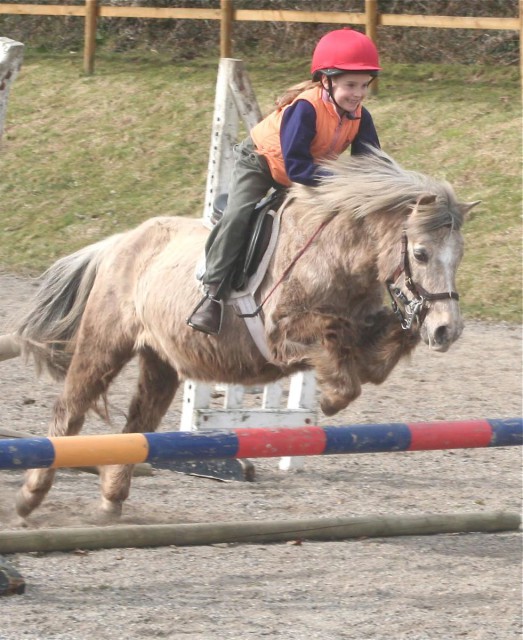 We all love Buie. Now 36 years young, yet still bursting with spirit and constantly aware of everything that goes on around him. He is just 11 hands. A Kerry Bog pony that was the original riding inspiration for all our children.

He loves to be ridden and can still show his enthusiasm with a little leap in the air, an action that others may misinterpret as a buck! He can open most gates, hear you coming from 60 feet in the dark and respond with an instant soft nicker, and distinguish between the sound of my walk and that of someone else who he knows is not so generous with treats. He also used to be able to jump his own height and literally smile when allowed to gallop. He can even get from one field to the next by lying down by the post and rail fence and wriggling under the bottom rail!

So are Sunny Girl and Buie more intelligent than most horses? Indeed, are many ponies more intelligent than horses? In general I believe that they are, although it is often means that ponies show this by being quicker to find ‘alternative strategies’ to work … yes the naughty pony is probably highly intelligent. However intelligence, like happiness, can be difficult to define when applied to horses.

I believe a horse with intelligence — a good brain — shows this as a young horse by being alert and interested in what is around them. Then as they grow older they become quick to understand communications with humans and learn from anything that happens in their training. Then gradually they become more independent, able to quickly assess new situations by themselves, and based on their past experiences react thoughtfully, sensibly and safely. In other words they become intelligent. This progression also applies to children!

However the progression will not happen if the horse is not happy. An unhappy horse will usually switch off and probably become unwilling and abnormally quick to respond with the natural flight or fight responses of a horse in stress. Unhappiness is debilitating and can make a horse appear unintelligent.

So what makes a horse or pony unhappy? There are four main reasons, the four I’s: They are Isolation, Inactivity, Injury and Insanity.

We don’t use single stables. Even with the competition horses in the competition season they are kept in small groups in as natural a way as possible. We do this because horses are herd animals, naturally sociable and in need of other horses to share the role of look out and protector. They need company and interaction with other horses in order to fulfill their natural herd instincts, including building friendships, mutual grooming and play fighting. To keep them isolated from other horses, particularly if it is in a small stable, runs the risk of damaging their mental health and by connection their physical health.

Without doubt there are possible compromises to this management routine, including regular turnout and riding in company, and being able to see and interact with other horses within the barn and over dividing walls. But to keep a horse in isolation behind high windowless walls, and with bars on the stable door to stop them looking out, is nothing but cruelty and a recipe for stable vices.

Given sufficient space horses in the wild tend to be always on the move. In this way they keep themselves fit and mentally settled. So to leave a horse in a small stable without exercise for even two days at a time is bound to have a negative effect on their well-being, especially when this is combined with too little food to keep them occupied. Even when in work we feed as little hard food as possible and as much clean, low-food-value, hay as possible.

Combined with grazing this means that our horses feeding program largely mirrors a natural regime with the horses eating little and often. With the ponies I also add barley or oat straw, so that even those prone to laminitis rarely have nothing to eat. In contrast to this too many horses are given too much hard food, combined with a low quantity of high-food-value haylage, and too little turnout or exercise. As a result they spend the majority of their time just staring at the walls and quietly going stir crazy!

Even the best of riders can be genuinely unlucky and have an accident causing a long-term injury to their horse requiring long-term box rest. Tendon and ligament injuries are fairly common or it may be a something like a hairline fracture or a serious wound that requires little movement to heal.

In these cases it is important to be inventive to avoid boredom. A window to look out of is a minimum requirement. In addition a change of stable every few days can be helpful, as well as large quantities of low feed value hay, possible in one of the devices that only allows a small amount of hay at a time to be eaten. It is also possible to construct a mobile pen in a field, so that a horse can have some variety in their days and eat grass but not gallop. Even taking a horse to a competition as a companion and leaving them in the trailer can enrich a horse’s life as they recover.

The Insanity I refer to is not with the horse but with certain riders and trainers! It fits with that famous line in Nicholas Evans’ book The Horse Whisperer, “It’s a lot like nuts and bolts — if the rider’s nuts, the horse bolts!” Of course I am not suggesting that many riders are actually insane but sometimes there are levels of ignorance or sometimes cruelty that make me say under my breath “this is insanity.”

In my experience the most common type of injury that is not to do with bad luck is with the spine. Horses that are inverted or locked in the back are often in pain and unhappy. It is commonly because a rider is too heavy or unbalanced, particularly in the rising trot, or they do not know how to train or keep a horse using their back. It is probably that many cases of kissing spine are caused by this.

Combined with back pain, one of the major obstacles we face in the sport as we strive for happy horses, is the tendency for many riders to treat their horses as machines. Most will deny this but an analysis of the pressures they put their horses under in training and competition often shows that a rider’s ambition and determination puts the focus largely on just the physical performance, rather than on both the physical and the mental.

Ironically working mechanically will be counter productive as this will usually create tension and anxiety, a tension that inevitably has a paralyzing effect on the horse’s performance. No human athlete will perform at their best if they are stressed and tense and the same applies to a horse. When did you last do something wonderful that was physical? Think about that occasion. An integral part of your physical performance was almost certainly a mental component. You were probably calm, focused and confident, and you may also have been inspired and ‘in the zone.’ Without some of these positive mental qualities high-level physical performance is impossible.

The Last Word from Buie

Buie is no longer capable of high-level physical performance, but he is still sound and spirited. He is also still a great communicator, if we take the time to look and listen, and he knows it is worthwhile talking to us. Of course he cannot talk but he is capable of an incredibly wide range of communication, and if he could talk I am sure he would echo Albert Schweitzer’s words “If you love what you are doing, you will be successful.” He loves his life and those who ride him over a period of time definitely feed off his joy. What more can we ask of a pony? 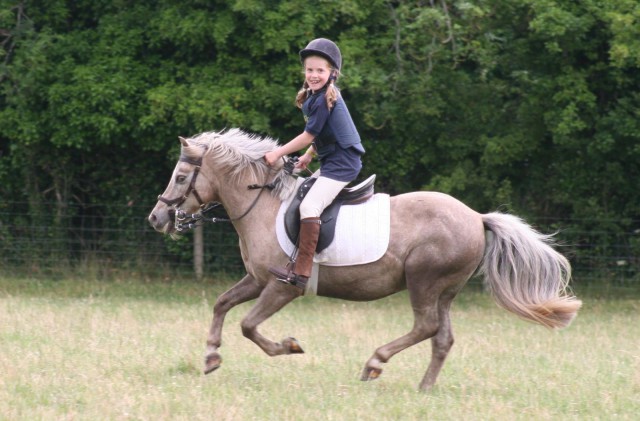 Holly and Buie enjoying their joint freedom in a field in their early days together. Photo by William Micklem.

Next time in the Happiness series: The two words that cause such unhappiness to horses and the golden yin and yang that underpin all training.