We are delighted to start the new year with a series on safety in eventing from EN guest columnist William Micklem. This is the fourth column in the series: part one, part two, part three. Click here to read all of William’s guest columns on EN. Many thanks to William for writing. Go Eventing. 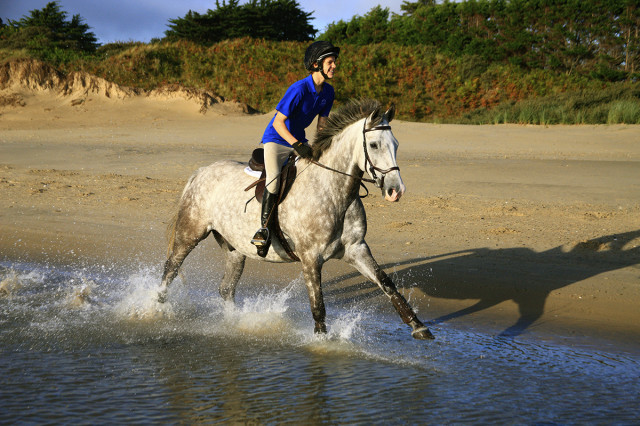 Leo Micklem on Arrow Flight getting properly fit for cross country. Arrow Flight is a half brother to Jackaroo and High Kingdom, being out of High Dolly and by the Irish Draught Grange Bouncer. Photo by William Micklem.

If humans could literally look at the world through the eyes of a horse they would be very disappointed. The human eye is an incredible instrument. For example the lens can alter shape almost instantly to change between long and short sight, we can see things in glorious technicolor, and many of us have 20/20 vision. But the horse has none of these powers!

If good human vision is 20/20, a horse rates as 20/60. This means that details a person with 20/20 vision can see at 60 meters are only visible to a horse at 20 meters. They also probably see things in fairly drab hues with no strong reds or greens, more shades of grey, yellow and brown. But worst of all their lens is immobile, so primarily they rely on changing the position of their head to see short and long distance.

In addition they basically look down their noses, so when the head is vertical and they are trying to look forward they see just the ground directly in front of them but almost nothing further forward and higher up. To look further ahead and higher they need to change the angle of the head more towards the horizontal. So a rider stopping a horse from changing the angle of his head in front of the fence is limiting a horse’s sight.

To have a contrast in colours is important, and its absence was probably a factor in William Fox-Pitt’s fall at Le Lion d’Angers. This was probably also a major cause of the difficulties at the final water complex at the 2014 World Equestrian Games in Normandy. It was not comfortable viewing as the majority of horses struggled up the bank and bounce in the middle.

When I walked the course after the competition it was obvious that the colour of the water and the bank was almost identical, making it hugely difficult for the horse. The cross-country guidelines also say not to use white fences in water but Will Faudree’s very serious fall, with Hans Dampf at Five Points in 2015, was over a white table in water.

Horses must be able to see clearly what they are jumping. Another example, from last year, when this probably did not happen, was when Liz Halliday-Sharp lost her four-star partner, HHS Cooley, jumping a fairly small but maximum width open oxer off a turn.

Liz said, “I arrived at the fence with the correct pace and a good shot and plenty of leg on, and as Cooley jumped he must have suddenly thought it was a bounce, and he came down in the middle of the fence, just in front of the back rail.” Logic and an understanding of a horse’s eyesight would suggest this fence should have been narrower and better defined. The same applies to the increasing use of wide flat tables with a sloping back section that the horse cannot see on take off.

It has to be asked why some course designers and some technical delegates can occasionally be blind to the logic behind the FEI guidelines for cross-country fences? Surely they need to work together more so there can be better checks and balances, combined with being held to account in a more transparent and official process. Such a process would result in higher standards and spread the responsibility, making it a win-win situation for riders and officials, and therefore also our sport.

One reader wrote to disagree, saying that it was an important skill to learn how to ride a tired horse. If it was racing I would say yes, but we are talking about eventing. If the fittening and conditioning is as it should be I see no reason why an event horse should finish the cross country feeling tired. In racing it is normal for a horse to be taken to his limit in terms of speed and energy — it is the very nature of the game — but this should not be the case in eventing.

In terms of both safety and success, for the short and long term, it is logical and sensible to have your horse fit enough so that they can do more than what is required in the competition, rather than being only ‘just fit enough,’ as is often the case, or the dangerous ‘not quite fit enough.’ Tired horses are an accident waiting to happen. It also has to be remembered that a horse going close to his maximum speed will become tired much more quickly than a horse going at three-fourths speed.

At some recent championship events, including the last two Olympics and the WEG in Normandy, horses have finished tired or not been able to finish at all as they ran out of steam. Therefore it has to be asked if the right type of horses, with sufficient gallop and stamina, are being used at the higher levels. Fortunately there is now a swing back to more quality horses and more Thoroughbred blood in four-star horses, and I believe this will make for a safer sport.

In addition it is still important that competitors recognize their responsibility to ride according to the ability and fitness of their horse and be prepared to pull up when things are not right. The future of the sport depends both on our success in ensuring the humane treatment of horses, and the public’s perception of the sport that this is true.

However I have no doubt that one of the great strengths of our sport is the wonderful way we look after our horses and example we set for the rest of the horse world. It is always a joy to go to a competition and see hundreds of well fed and happy horses and see new generations learning to both ride well and learn good stable management. The value of this aspect for the horse world in general should not be underestimated when selling our sporting product, because I am not aware of any other equine activity doing it better.

There is one issue that a number of us have tried and failed to draw attention to for several years. It is the issue of the dressage coefficient. From 1977, when they introduced marks out of 10 for each movement instead of 6, a coefficient or multiplying factor of 0.6 was used on the dressage scores to bring the scores closer together. This had the desired effect of reducing the influence of the dressage mark.

Then in 1998 the coefficient was very quietly changed to 1.5, thus increasing the influence of the dressage and thereby decreasing the influence of the jumping. Apart from having the opposite effect on the relative influences of the three phases than most think is right, it also makes following the scores very difficult for the wider audience. It also means that in the subjective world of dressage judging the bad scores of a judge having an off day have a greater chance of ruining the competition!

But the worst thing about this coefficient is that it impacts negatively on safety. To win at the one-star and two-star level the dressage has to be very good, even more so than at National competitions where there are no coefficients. Therefore the top riders look for horses of a dressage type to win at this level.

Unfortunately many of these horses are not the best cross-country horses, both because of a lack of gallop and lack of efficiency in their jump. Some also have stamina problems. However the obvious result of winning at the two-star level is to take them on to the three-star and four-star level. Then life becomes more of a struggle on the cross country, there is little or no room for error and the risk of a fall and a serious accident is increased.

I have written about this several times and Jane Heidelberg from the USA has sent the FEI full breakdowns of championships events in recent years to show the impact of removing the coefficient. There has been no response, but possibly now is the time for the FEI and all of us to take this matter seriously.

There has been one outstanding addition to rider safety in the last year that the FEI should also grasp. It is the EquiRatings Quality Index (ERQI) run by Ireland’s Sam Watson and Diarmuid Byrne. It operates a simple method to help show at what level a horse and rider should be competing. Without a doubt the evidence is there that its use would have saved lives in the past and therefore the strong probability is that it will save lives in the future. For example, in their first year working with Eventing Ireland falls at two-star level in National competitions fell by 56%.

Irish team member Sam Watson, son of John Watson, who was silver medallist on Cambridge Blue (TB) at the 1978 Lexington World Championships behind Bruce Davidson on Might Tango (TB), explains:

“The ERQI is one more tool in the safety toolbox. It is based on factual results and uses data science to assess both the risk and likelihood of success in the cross-country phase. It works because those with poor form and low likelihood of success are far more susceptible to falls, particularly horse falls at the higher levels. Therefore the system can step in before the fall does. The reaction has been overwhelming positive. The talk of increased awareness, better decision making and more targeted training, all as a result of using the ERQIs, is making our sport safer.”

Blind to the need for change

A good idea has to give way to a better idea and the EquiRatings Quality Index is a great example of this. There are other good ideas that need to take root in relation to course design, training and progression. Unfortunately a few traditionalists are blind to the need for change. Instead they would like both officials and participants to take a more robust attitude and take a step back to the ‘good auld days’ of eventing.

But a quick look at the old films will show falls galore and many unacceptable sights. In many ways they were the ‘bad auld days,’ with some fatalities of both riders and horses, but records were not kept and as ever memories tend to be blind to the difficult days.

There are better ways that treat horses humanely and avoid the accidents waiting to happen. We can develop the EquiRatings model and have data not just on clear rounds but on the quality and level of risk of a cross country round. We can also improve the cross-country guidelines and the training culture so that horses are always allowed to see clearly what they are jumping.

Next time: SAFETY AND THE FUTURE, including the worst fence ever jumped in a cross country and an unforgivable drowning.