We are delighted to start the new year with a series on safety in eventing from EN guest columnist William Micklem. Click here for the first column and here for the second column. Click here to read all of William's guest columns on EN. Many thanks to William for writing. Go Eventing. 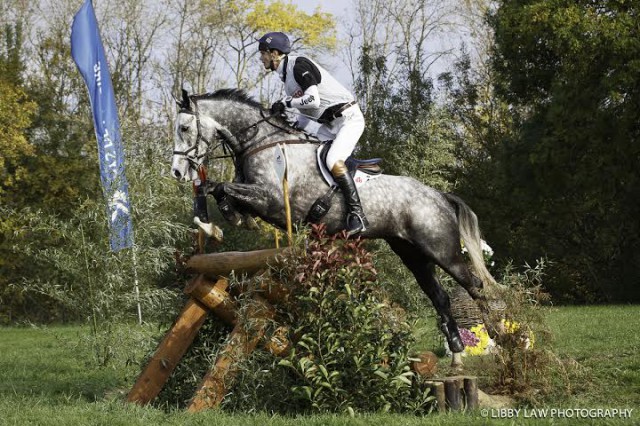 William Fox-Pitt and Reinstated at Le Lion d’Angers before their fall at the keyhole. Photo by Libby Law Photography.

I sat on the path just staring at the green screens. Any fatality is tragic but what would happen to our sport if this man had been killed? The man who has won more international events than anyone else, and is probably the most recognizable rider in the world. The man who is a role model to thousands, including me, and consistently gets things right.

As we all know William Fox-Pitt survived his fall at the keyhole fence at Le Lion d’Angers in France, and recovered to ride in his fifth Olympics in Rio, but to say the least it was obviously a very close call.

A contract between rider and horse

So was anyone or anything responsible for his fall?

We all have specific responsibilities in our sport … officials, trainers, coaches, riders and of course not forgetting the horses. Let’s start with the rider and horse: I think about it as a contract between the rider and the horse, because both parties need to metaphorically sign up to the deal that is safe cross-country performance.

Initially the rider has a responsibility, often with the help of a coach, to give their horse the right progressive preparation for cross country, and in particular learn how to keep a consistent positional balance so they become an easy load for their horse. Then for each cross country session the rider must first put their horse ‘in gear’ in a very positive manner, then give their horse the right direction and speed for each fence. After this it is the horse’s responsibility to ‘take ownership’ of the fence and do the jumping.

Teaching and allowing the horse to take ownership of the fence is a key part of safe cross country riding … and there is common agreement about this from the best of riders and coaches.

“The horse’s responsibility is to do the jumping and to do this they need a clear view of the fence and a rider who leaves the horse alone in the final strides.” David O’Connor

“When schooling I like to trot to fences on a loose rein … and in canter I want a horse looking at the fence and judging it, deciding to pick up early or late … I like to let go my rein and leave it up to them … I believe my horses have to learn to be wrong.” William Fox- Pitt

And finally Jimmy Wofford with an echo of last week’s article on trust and previous articles about the need for acceptance rather than submission.

“Certainly we need great movers and powerful jumpers, but above all we need a partner, not a slave … teach him that you will trust him with your life. Give him the education he will need, and then sit quietly while he does the job you have very skillfully and very patiently taught him.”

More riders and coaches need to realise the importance of training their horses from the beginning to take responsibility for the jump, and to find that extra leg when required … what I call fifth leg training.

If your horse looks carefully at what they are jumping, is able to make small alterations when getting a little too close or far away from a fence, then produces an appropriate jumping effort and copes quickly with the unexpected slip or stumble, they can be said to have a ‘fifth leg.’

The traditional Irish horse has a legendary fifth leg and this has been a major reason for buying Irish event horses. However there is also undoubtedly a nurturing component to this, with young Irish horses spending their early years in big fields in a more natural environment, and often hunting as young horses. There are also thousands of ponies showing a wonderful fifth leg and a good ‘brain’ every weekend in Ireland, and a little pony blood undoubtedly works well with sport horses.

I will never forget Camilla Spiers on the brilliant little four-star dynamo Portersize Just A Jiff at the 2014 World Equestrian Games, simply dancing through the first water complex. ‘Jiff’ is one-half Connemara and one-eighth Irish Draught and has an extraordinary fifth leg.

There was a big maximum drop, followed by a big brush drop into the water, followed by a wide skinny on a bending line with an awkward distance. Many horses struggled with the skinny and few jumped it cleanly, but ‘Jiff’ turned it into a Pony Club exercise by neatly banking the skinny like a gymnast on a vaulting horse!

If you want to be safe across country the fundamental aim in training should be to develop a horse’s ability to look after themselves, even when in a little difficulty as ‘Jiff’ was in France. Therefore all horses should have a ‘fifth leg training’ programme as an integral part of their preparation for cross country. I believe it is the one area that is often neglected in the training of event horses despite its obvious need. The huge pay off is that training in this way will allow more room for rider error and keep riders safer.

Without exaggeration I make fifth leg training for the horse part of every single lesson in the same way I make ‘feel’ part of every lesson for the rider.

However there are some horses that are slow in their brains and slow to react who may never be suitable for cross country. The worrying thing is that we are probably now breeding more of these unsuitable cross country horses as we move away from traditional event horse breeding, and away from rewarding a good ‘brain’ in young horses in preference for a big trot and an exaggerated jump … neither of which help produce a good cross country round.

The opposite of fifth leg training

It is also a regular occurrence that some horses don’t take sufficient care across country simply because they are listening too much to their rider, a rider who is over demanding and over riding. The root of this is often bad dressage, with a rider who uses the rein too much and seeks submission rather than acceptance. Then when jumping this rider may also distract their horse close to a fence as they dominate, and the result will be a greater risk of an accident.

As William Fox-Pitt says: “I always rides with neck strap … ridiculed but part of my riding … I put a finger in when jumping or when one bucks … it also keeps me from interfering with the rein … a rider interfering with rein on way down to fence is fundamentally dangerous.”

So when a rider is doing this continually, or is obviously out of balance, or has obviously and regularly the wrong speed, we should not be afraid of taking action to send this rider ‘back to school.’ But William Fox-Pitt has no need to go back to school except to teach other riders. He rides beautifully, he is patient and progressive in his training, and he rides talented horses. So although every rider, no matter how good, will have freak falls, it is worthwhile looking in other directions for reasons for his fall in France.

The technical delegate and ground jury

Two horses fell at the keyhole fence, four horses stopped and several left legs, so it did not jump well, especially bearing in mind this was an elite field of some of the very best young horses in the world. However it was reported that neither the technical delegate, the ground jury, nor the rider representatives made any comments about the fence beforehand.

It is very surprising that they made no comment because this fence had no brush or equivalent at the top, despite the FEI guidelines stating that with a keyhole fence ‘any surface that can be touched by the horse must always be soft.’ British Eventing suggests “at least 25cm brush above the solid part of a keyhole fence.” This is obviously sensible because many horses jumping a keyhole tend to be very economical with their jump because of the roof over their heads.

Then when you add into this equation a large crowd on the road below (it was a main access point), a downhill approach towards the end of the course after a galloping section, with width on the fence and a steep slope on the far side, it all adds up to a very challenging fence. In addition the fence was in a group of trees and all the fence was of a similar colour, meaning the part to be jumped was camouflaged, yet most guidelines state that materials should be of light color in situations where shadows come into play.

The very experienced and well-respected course designer Mike Etherington Smith, who is in the process of updating the FEI guidelines for cross country, thinks that these fences should have no spread. But international stars Buck Davidson, Doug Payne and Lucinda Green all go further and say that they should not be used, especially as Irish rider Samuel Moore was killed in a fall at a keyhole at Blenheim in 1997, and in more recent times Harry Meade had two bad falls over them, and Andrew Nicholson’s bad fall was when jumping a fence under a banner — all in addition to William Fox-Pitt’s fall.

It is easy to be wise after the event but in fact coaches and riders have been concerned about keyhole fences for some time, and ways need to be found for us to communicate more effectively on all safety issues. It is also possible that we need a separate specialist cross-country ground jury to inspect the courses, rather than the present system of using a ground jury whose primary task is judging the dressage. It is also possible as Mike Etherington-Smith says that “some of the (cross country) guidelines could become rules.”

So together we should accept our joint responsibility for the future and go forwards.

Next time: SAFETY AND BLINDNESS … including specific ideas for fifth-leg training and further concerns regarding fence design.