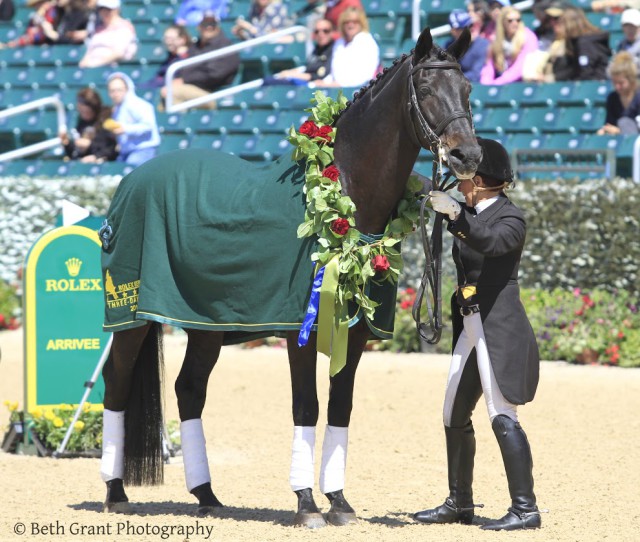 Windfall stands in the Rolex arena once again. Photo courtesy of Beth Grant.

The famous Trakehner stallion, Windfall, was retired in a special ceremony before show jumping at the Rolex Kentucky Three-Day Event. Owners Tim and Cheryl Holekamp were present for the ceremony, along with dressage rider Jodi Ely, who demonstrated the 23-year-old stallion’s prowess in the dressage ring.

Windfall enjoyed an illustrious eventing career spanning six years and including three appearances at Rolex and one at the 2004 Olympic Games. Ridden as a young horse and short-listed for the German Olympic team with Ingrid Klimke, Windfall picked up many accolades in the early parts of his career, including a nod to the short list for the 2000 Olympics.

Windfall came to the Holekamps in 2000 to continue his competition career with Darren Chiacchia as well as begin breeding. He set a long-standing record at Rolex for the highest percentage achieved in the dressage (over 78%) — a talent that carried over into his post-eventing career in the dressage ring. 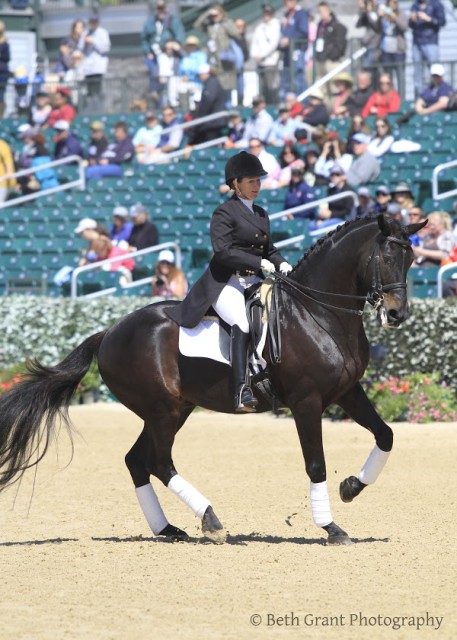 Now happily retired to the Holekamps’ New Spring Farm in Columbia, Missouri, Windfall is still the picture of health and vitality. Cheryl Holekamp has ridden him in the dressage ring in his retirement, working on the Grand Prix movements that he seems to enjoy.

When asked how the retirement ceremony felt to Tim Holekamp, he replied, “Well, mostly I spent too much time fretting about the details — posters for the USEA tent, script for the ceremony, video to put up on the big screen in the Rolex Arena, making a plan for each person in the ceremony.

“As distracted by all this as I was, when the moment came for all of us to enter the arena, Cheryl showed me her handkerchief and told me she was ready to go in. Truthfully, I did not understand her and asked what she meant, maybe to wipe off Windfall’s mouth? ‘No, you dope,’ she replied. ‘To mop up the tears.’ I laughed at her, thinking that tears were the last thing on my mind.

“But … when the crowd began to cheer as our friend Jodi Ely began to demonstrate his Grand Prix dressage movements, I looked up from the presentation site into the grandstand and could hardly choke back some sobbing of my own. In fact, I feel that way again now, thinking about that moment and that horse. Few could imagine how deeply Windfall has affected our lives.”

Windfall’s legacy will continue with the recent announcement of the new Windfall Trophy, which will be awarded to the stallion with the most USEA points each year at the Preliminary level or above.

We wish Windfall the best in his retirement — his illustrious career will not soon be forgotten.

To learn more about Windfall’s career and breeding, click here.