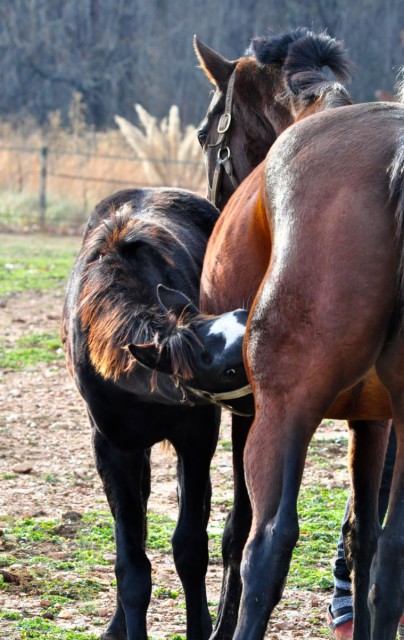 Since the official change to the short format in 2006, modern eventing has been searching for the ideal recipe to the perfect event horse.

As our sport changes, so does the type of horse that is required to be truly successful at the upper levels, and while other countries have time-honored sport horse breeding programs that have adapted beautifully to the new needs, the United States is still working to find the solution.

In the small town of Thurmond, North Carolina, a farm named Wits End Eventing has a unique and intelligent approach to creating the next generation of eventing superstars.

Founded six years ago by husband and wife team of Adrienne Classen and Dale Hinman, their respective backgrounds bring several notable and intriguing aspects to the table.

Along with being a successful pediatrician, Adrienne is a life-long eventing enthusiast, and competed through the Intermediate level with multiple horses, including Sharon White’s current four-star mount Rafferty’s Rules.

Before beginning her breeding program, Adrienne had a thriving sales business, and to this day has never selected a horse that did not compete to at least Intermediate level, a bar to which she holds all of her prospects.

While Dale was not initially as invested in the horses as his wife, that quickly changed as their breeding program got off the ground. An MIT and Stanford graduate with fifteen patents to his name, he was highly intrigued with the mathematical qualities of a breeding program, and quickly became integral to the system by creating the Wits End Eventing databases that currently shape how they design their sport horse matches.

The program started with Adrienne’s interest in breeding her CCI2* mare, Irish Lace, and quickly expanded from there. “We noticed certain characteristics when Adrienne was picking out resale horses, and I was kind of curious about how their pedigrees were related,” says Dale.

“From there, I decided to compile a database of all the successful horses in all the four star competitions since 2006, and another database with all the pedigrees of all the horses that have competed at the four star level since that year“.

The concept of these databases alone is staggering, and something that only an engineer could take upon himself with an eager attitude. For every horse that has competed at the four star level since 2006, Dale has their height, their sex, their percentage Thoroughbred blood, their scores in each respective phase, and pretty much every other category you can think of right at his fingertips.

“You can run a graph on this database to see how height relates to performance at the four star level,” says Dale. “We use this to statistically determine the characteristics we are looking to reproduce in our breeding program”. 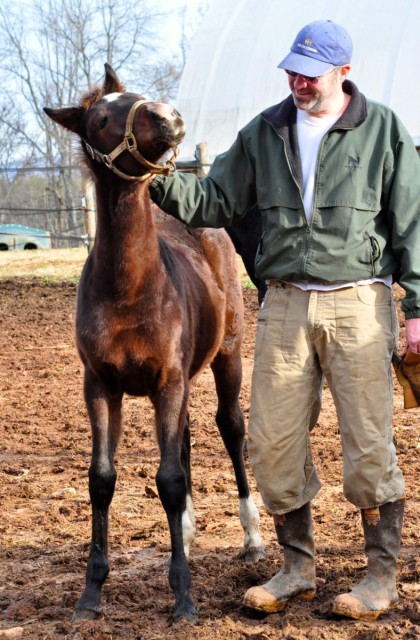 Dale Hinman gives some love to White Lightening, a weanling filly out of My Martina by Wingman. Photo by Kate Samuels.

They use the corresponding pedigree database to break down the selection process for matching broodmares to suitable stallions. Wits End Eventing uses linebreeding, a practice that has been common in the Thoroughbred racing industry for generations, and is also very successful in Europe for sport horses.

Pedigree theory suggests that the focal linebreeding should be in what many call the engine room, which is the fourth through sixth generation positions.

“Analyzing pedigrees this way and using linebreeding is very time consuming, but there’s a lot of basic genetics and statistics behind it, which is why we look at the data of the horses winning at the four star level,” explains Adrienne. “As scientists, we look at what succeeded and that’s what you breed. It seems to make sense”.

“We don’t always look for the same stallion, because the theory in linebreeding is that the fourth, fifth and sixth generation is where the power comes from, so if you can concentrate horses in those generations, you can amplify beneficial characteristics” says Dale.

The database systems that they have created allow them to have a unique approach to matchmaking and analyzing what characteristics are desirable for a four-star eventer. Of course, as with any breeding program, a good part of it is up to chance, but Wits End Eventing has a very clear idea of the type of horse that they want to produce. 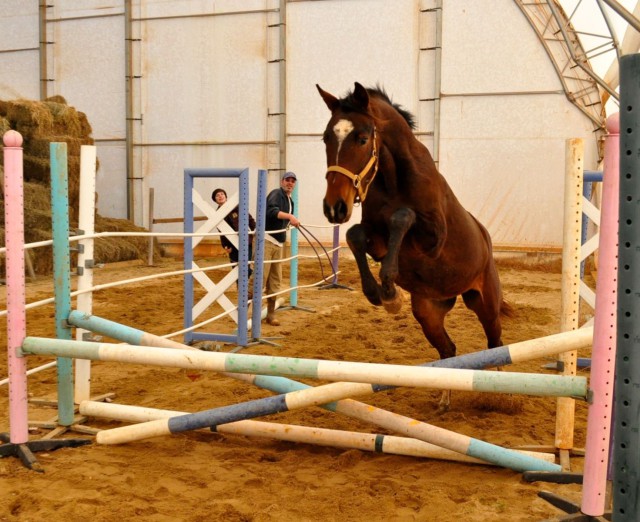 “Our ideal horse is uphill and forward thinking with movement that is well above average, but not extravagant,” explains Adrienne. From looking at the results of four-star events, they have found that statistically horses with extreme movement are wonderful to watch, but ultimately lack the ability to be efficient in the galloping lanes, causing slower times and more strain on their bodies at that level.

“We want a horse that is smart and athletic with an excellent jump, but without too much tendency to over-jump.” In much the same way, a horse that over-jumps all of the fences is stunning in sales ads, but loses too much time on cross country looming in the air, as well as places extra strain on its legs by jumping too high.

By running graphs on how height and percentage of Thoroughbred blood is related to four-star performances, they have come to the conclusion that the ideal height is 15.3 to 16.2 hands, with 65% to 85% thoroughbred blood.

They prefer to have at least one or two grandparents that are full Thoroughbred so that the horse maintains his or her endurance and can show a great gallop. The other percentage of warmblood comes in key on the last day, for the statistics show that warmbloods excel in the show jumping most of all, contrary to much belief that the dressage is where they dominate.

Tune in next week for the second part of our interview with Wits End Eventing to find out what makes their program unique, and how they are hoping to change the sport horse world for Eventing! Go U.S. breeders!