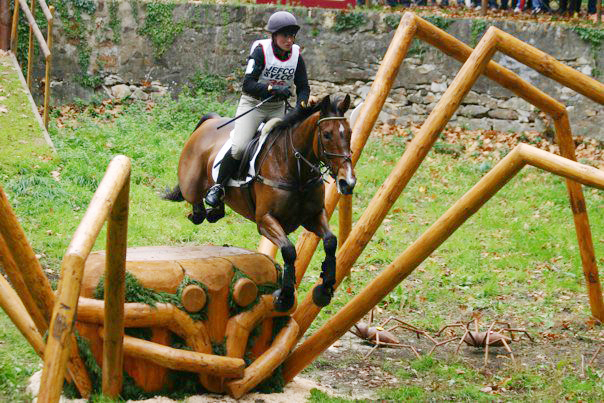 Becoming a working student is a rite of passage for every rider who is hoping to compete at the upper levels and especially those who are dreaming of becoming a professional in equestrian sport. The process is one drenched in sweat, blood and tears and has frequently been colloquially called “slave labor.” Ideally, it should be more of a positive educational experience than purely an exercise in toil, and that’s exactly what Lindsay Traisnel (nee Pearce) and her husband Xavier believe, and they’ve crafted a program to fit that need. In the Traisnel Equestrian Young Horse Development Course, students are taught the vital skills of how to take an unbroken horse through the training process, to competition and beyond.

Originally from Canada, Lindsay competed through the CCI2* level in the United States and worked for the O’Connors, Clark Montgomery and show jumper Gavin Moylan before moving abroad. After selling her horse, she decided to take that money, move to England and work for Lucy Wiegersma with a young horse in tow. It was there that she met her future husband, Xavier Traisnel, who was freshly graduated from the National Riding School in Saumur, France. Xavier had just received the highest level of teaching available in France, the BEES2, and had also produces his own horses to the Intermediate level.

After living and working together for over a year in Lucy’s yard, the two began dating and eventually were married. “We have only ever known each other as co-workers, which makes working with your husband a lot easier than it sounds,” Lindsay said. After finishing their work for Lucy, the two moved to Janzé, France, to begin their own business, Ecuries d’Aulnais. It is here that they focus on developing young horses into future stars for international eventing.

While the idea of tutoring young riders in the ways of the business is nothing new, Lindsay and Xavier are both bilingual English and French and are excited to offer the opportunity for travel and exposure to more than just the local crowd. “There are other programs similar to ours, but the difference is that I wanted to make it possible for North Americans to come,” Lindsay said. “When you travel to a different country, its difficult to bring your own horse, find somewhere to live and get your memberships and such. We are able to provide all of this in our program.” 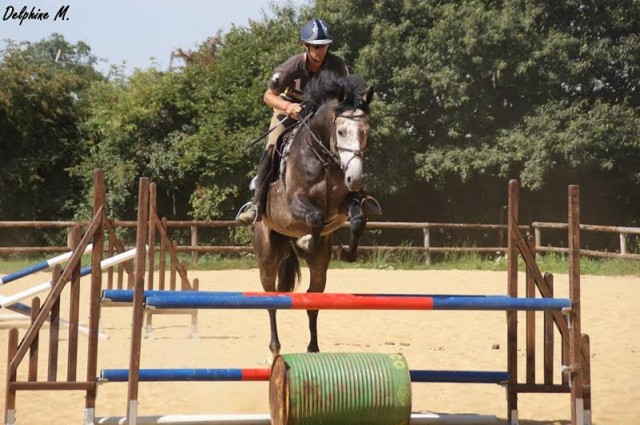 So what exactly is the Young Horse Development Program? If you are accepted into Traisnel Equestrian, you are provided with a young horse to learn on, care for and compete on under their guidance and coaching. You are responsible for helping with the care of the many other horses in the barn and various duties around that. However, the course also included tutoring in things such as breaking in babies, grooming, stable management, veterinary care, presentation and marketing your young horse to potential buyers. Currently, there are 19 horses in the barn, 11 of which are competition age, so there is plenty to do.

Students are also allowed a few weeks for traveling in Europe and are given all of the prize money that they win on their selected mount. Should the young horse they are riding sell due to their hard work and diligence, the student is granted a commission on the sale. Lindsay and Xavier provide everything in between, including entry fees, stabling, housing, transportation, and farrier and veterinary costs.

For the most part, we know about France’s young horse program due to the notoriety of Le Lion D’Angers, a championship competition in the fall that has incredible prediction statistics for the future success of its winners. Société Hippique Française, a separate association in France that runs all of the competitions for 4-, 5- and 6-year-old horses, is also very well developed.

At the age of 4, horses are asked to do a dressage test that shows walk, trot and canter in both directions and includes medium gaits. The show jumping is simple, and the cross-country test includes all of the basic questions at smaller heights. The courses increase in difficulty as the season progresses, finishing at about Training level height. For 5- and 6-year-olds, the year-end goal is Preliminary and a tough CIC*, respectively. The SHF also offers incredible prize money for their young horse classes, with one of Lindsay and Xavier’s 4-year-olds last year winning more than 1,000 euros in his competitions. 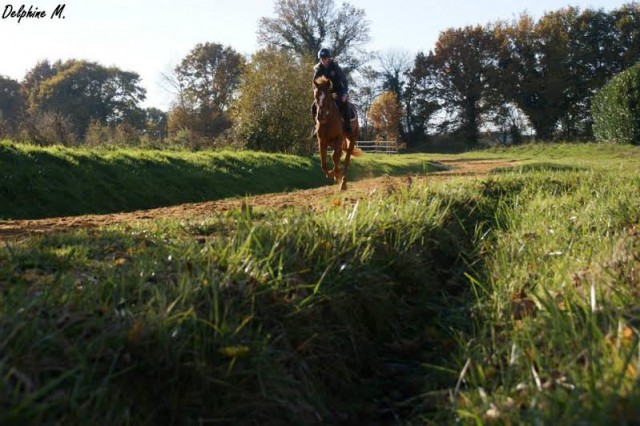 Conditioning the horses at home. Photo by Delphine Maloeuvre.

The skills to develop a young horse are integral to surviving in this industry, and the opportunity to learn from the SHF is one that is not afforded to many North American riders. “Great horses aren’t always for sale, and even if you have a good budget to buy a CCI2* horse, chances are it’s for sale because the owners don’t think it will be a CCI4* horse,” Lindsay said. “Plus, it’s the best feeling when you jump around your horse’s first Preliminary if you were the very first person to sit on them.”

When considering candidates for the course, Lindsay stresses that it’s less about their current level of experience, and more about their dedication and motivation on the job. “We know what it is like,” Lindsay said. “We understand that first and foremost, you are here to learn and not to be a slave. Obviously there will be work involved, but also fun, learning and a chance to compete and travel in Europe.”

“We just wanted to do something a bit different to make sure that people are learning, not just becoming free labor. While I have been lucky to work for some great people in some great places, it hasn’t always been great, and sometimes you end up doing a lot of work for very little in return,” Lindsay said. “We are able to find a suitable lease for students so that they can take a young horse and produce them. Whether they want to be a professional or just be able to create horses, it’s a very important skill and not something that is taught very much in the United States.”