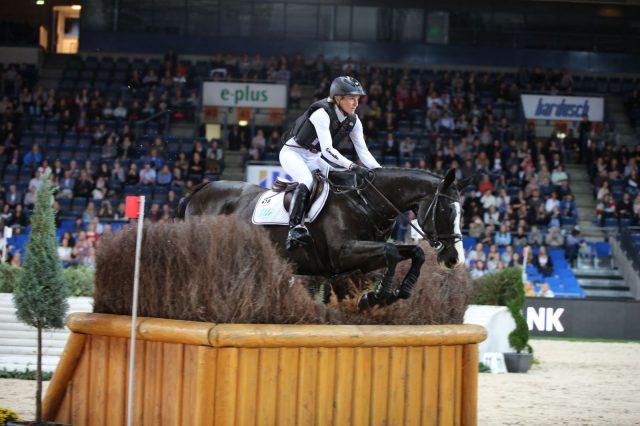 Quick thinking and fast feet are the name of the game when it comes to indoor eventing, and nowhere is the competition speedier than at the Stuttgart German Masters. Top event riders from seven different countries contested yesterday evening’s class before a roaring crowd of 7,500 spectators, marking the start of the European indoor season. The final rider to enter the arena, Germany’s Ingrid Klimke, stepped on the petrol with just a smidge more conviction than anyone else to walk away with the top prize.

Tryon double world champion Ros Canter of Great Britain had the edge up until the very end, riding her own three-star horse Las Vegas, a 10-year-old Holsteiner gelding (Glock’s Lightning x M-Salome, by Chamonix). But Ingrid and Parmenides, a 14-year-old Trakehner gelding (Sir Chamberlain x Praedestina, by Habicht) owned by his breeders Marion and Eric Gottschalk, stopped the clock a fraction of a second sooner to win. 2018 marks the second time Ingrid has taken the title, the other being in 2012. 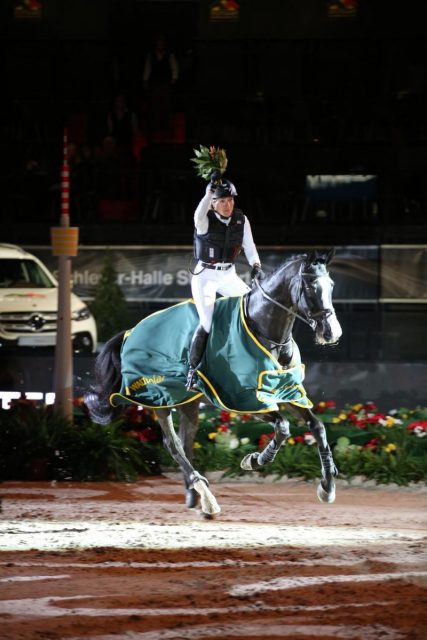 Not unlike Ingrid, who just two weeks ago swept two top-three finishes in Grand Prix dressage classes and regularly holds her own in high-level show jumping competition, Parmenides is an equine jack-of-all-trades. The horse has been with Ingrid since the age of 4, excelling in young horse competition and eventually eventing through the three-star level. After an injury and subsequent retirement from eventing, the horse has spent his past couple years as a show jumper. The pair has competed through the Grand Prix level, even cracking the 6’5″ mark in six-bar competition, and have shined in indoor eventing as well which naturally combines the horses’ two talents.

Both horse and rider seemed to be having a blast on the Stuttgart course. “I’m so happy,” says Ingrid. “That was 150 seconds of pure fun today. It’s such a joy to ride here — the support you get from the crowd is incredible.” 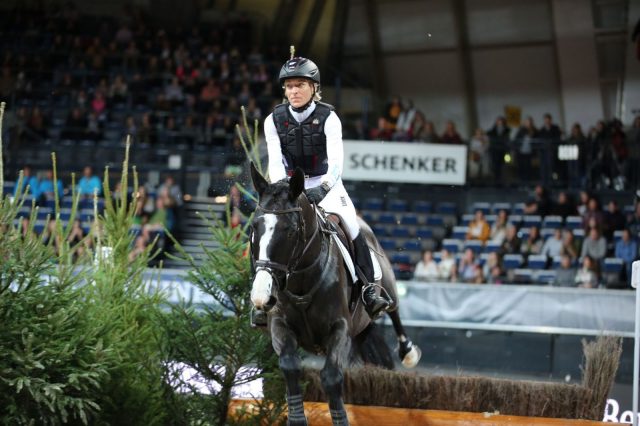 We were excited to see Britain-based American Tiana Coudray paired up with her London Olympic mount Ringwood Magister, now 17 years young, and the pair looked on form before “Finn” pulled up lame after negotiating the triple. The horse was attended to by veterinarians and Tiana reports that he is OK and has been cleared for travel home.

“Sadly Finian sustained a soft tissue injury tonight,” she updated via Facebook. “He was having a fantastic round, jumping and galloping amazingly, and most importantly, he was having the time of his life. The vets gave him the very best attention immediately in the arena and thankfully he is now resting comfortably back in his stable.”

You can rewatch the Stuttgart livestream here. Here’s a replay of Ingrid’s winning round:

[Last to Go But First in the End: Second Home Win for Ingrid Klimke Ahead of Double World Champ Rosalind Canter]