It’s a time-honored New Year’s tradition here at EN to take a look back at some of the most mind-blowing saves over the past 12 months. When things start going pear-shaped over a jump it takes a strong core and sense of balance, a hefty dose of grit, and a horse with a lot of heart to stay upright and make it work.

This year we’re turning it over to YOU, dear readers, to tell us who you think had the best save of 2019. You know the drill, in the same vein as our Who Jumped It Best? series, cast your vote for who you think saved it best this year. In chronological order:

Now here's something you don't see everyday….Ariel Grald and Leamore Master Plan took the flag for a ride at the Rolex Grand Slam Challenge! 👀 The pair went on to finish with just 6.4 time penalties! #USAEventing pic.twitter.com/iQCJfay8N5

This isn’t exactly a traditional save since Ariel’s position DIDN’T EVEN WAVER but she and “Simon” handled this unusual situation, which could have been a major distraction and taken their focus away from the next two fences in the combination, with the poise of seasoned professionals. I think it’s safe to say that this pair impressed us immensely with their rock-solid performance during their five-star debut. Not only did they make it through this complex without impaling themselves, but they wen’t on to finish clear with just 6.4 time penalties. Of course, Ariel and Simon also went on to Burghley in the fall where they finished as the top first-timer!

Fylicia Barr & Galloway Sunrise do the twist at Jersey Fresh 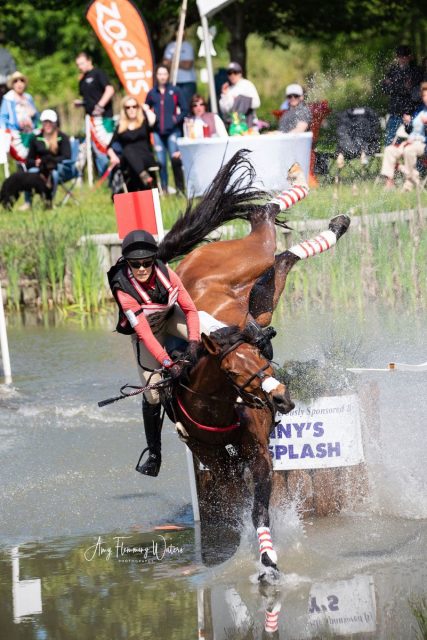 Fylicia Barr, who led the CCI4*-L heading into cross country at Jersey Fresh this spring, had a heart-stopping moment when Galloway Sunrise’s hind quarters twisted out behind during landing from a skinny brush. Fylicia and “Sunny”, who was purchased for $500 off of Craigslist, both managed to stay upright and come home clear and inside the time, which meant that they maintained their lead heading into the final phase. The next day, they show jumped their way to take the win!

BT Angelo, a young mount of Ireland’s Camilla Speirs, got a real face full when he stumbled in the water upon landing from a brush fence at the Camphire International Horse Trials & Festival in Ireland this July. Camilla stayed balanced and Angelo managed to defy gravity and find his feet under him. The went on to jump clear with only 1.2 time penalties and ultimately finished in 6th place in the CCIYH2*-S division.

During the CCI2*-L at Haras du Pin in France, Cuattro de Tael took a huge leap over a roll top which unseated French rider Mathieu Lemoine upon landing. Mathieu slipped up onto the gelding’s neck and lost at least his left stirrup in the process, but managed to center himself and clear the next element of the combination still sans-stirrup. By the look he gives the photographer at the end of this series it appears that he surprised even himself by making it through unscathed!

We all know how this story turns out: Pippa and MGH Grafton Street went on to win Burghley wire-to-wire, but it wasn’t without a heart stopping moment in the water under the Lion’s Bridge, an iconic fixture of the Burghley House grounds. Completely unrelated to any fence, “Squirrel” stumbled and nose-dived upon entering the water and, to the gasps of onlookers, very nearly went for a swim. At less than a minute from home on cross country a fall here would have been extra heartbreaking, but Pippa regained composure and finished with four time penalties to hold the lead. Sadly, Tim Price and Ringwood Skyboy who were the last out on course that day stumbled in the very same spot and weren’t as luck fighting gravity. It was a sad end to Tim’s 2019 season and has happy as everyone was for Pippa, you just can’t help but be gutted for Tim too!

💦Save of the day alert 💦 “I almost fell off in the first water. I needed a re-group for the minute after that my tack was completely soaked. I felt like I was riding in the pouring rain and my foot was sliding out of my stirrup.” Erin Sylvester didn’t let a little water stop her from moving all the way up to third in the CCI4*-L 🙌🏻 @samanthalclark photos

After winning the Fair Hill CCI4*-L in October, Erin Sylvester ultimately rounded out her super season with a second long-format four-star win at the Ocala Jockey Club in November. Erin and Campground were sitting in 24th after dressage, but moved up to third after cross country by jumping clear and a single second over time. For a moment though, it looked like their weekend might end early when Campground lost his footing after dropping into the first water on course. The pair regained their composure in time to flawlessly jump through the rest of the complex.

Cheers to these thrills that didn’t become spills! Now it’s up to you, citizens of EN — who do you think saved it best this year?

Tilly Berendt contributed to this report.