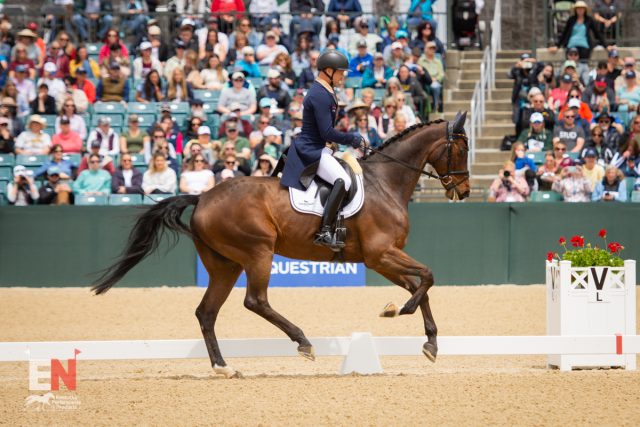 He’s back, baby. The meister of Kentucky, three-time winner here Michael Jung, has claimed the top spot at the conclusion of dressage with fischerChipmunk FRH owned by Sabine and Klaus Fischer, Hilmer Meyer-Kulenkampff and the DOKR, on a score of 20.1.

And he’s back in a big way too: that score of 20.1 is the lowest dressage score at this event since 2009 when Bettina Hoy and Ringwood Cockatoo scored a 19.2 and it’s a personal best at the five-star level for Michael, including his Olympic and WEG appearances.

“I have a real superstar. He’s very nice to ride. Today it was just enjoying riding him,” Michael said. “He was really powerful, but also really relaxed so that was a very good balance. I am very happy to have him, and I am very thankful to the fischer group for this amazing horse. I’m very happy to be here with him.” 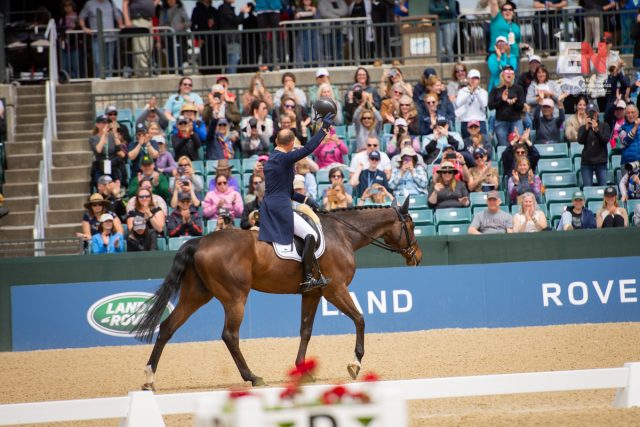 Superstar, indeed. Though 20.1 is a five-star personal best for Michael, it’s not for the 14-year-old Hanoverian gelding (Contendro I x Havanna, by Heraldik xx) bred in Germany by Dr. Hilmer and Sabine Meyer-Kulenkampff — he scored a 19.9 with former rider Julia Krajewski at the 2018 World Equestrian Games, which runs a five-star dressage test, but four-star cross country. That means that tomorrow will be the gelding first test across the country at the five-star level, and what better place to do it than at Michael’s favorite event? 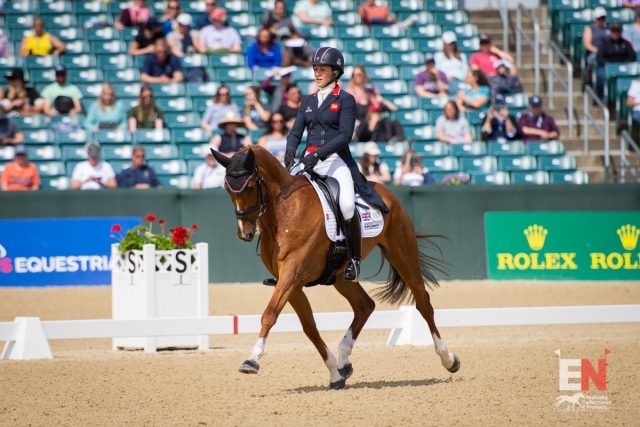 We saw a hefty shuffle across the top of the leaderboard today, and now sitting in second place are Great Britain’s Sarah Bullimore and her homebred Corouet, a “mighty big mover in a small package” owned by the Kew Jumping Syndicate, who scored a 25.7.

Corouet is a special little horse for Sarah (and I mean little: he’s 15.2 hand tall). Sired by Balou de Rouet, who also sired Sarah’s long five-star partner Reve du Rouet, “Elfie” is the first born out of Sarah’s European Championships mare Lilly Corinne. They’ll tackle the horse’s first-five star together here in Kentucky, an event the Sarah has travelled to just once before back in 2014.

“It’s an absolute privilege to be back here — it’s so hospitable and such fun to come here,” she said. “We don’t always get the opportunities to come here, and I’m not getting any younger, so I grabbed this with both hands. I’m over the moon to be back here … It’s a lovely atmosphere and a lovely, lovely event.” 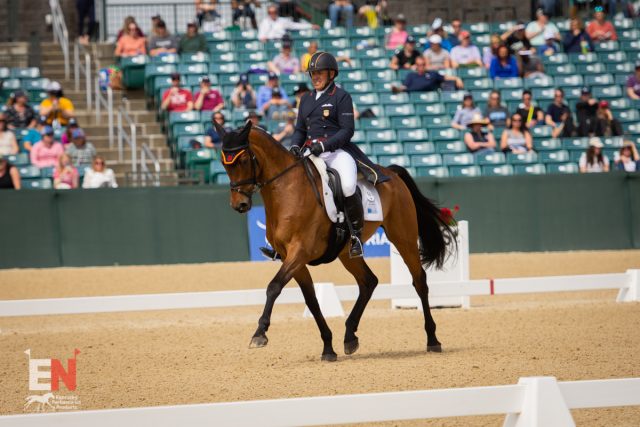 As delighted as we are to see so many fantastic international riders join us here in Kentucky, we’re also delighted to see a U.S. rider, Buck Davidson, sitting in third place with Carlevo (Caresino x Ramatuelle, by Levernois) owned by Katherine O’Brien.

As consistent a performer as the 15-year-old Holsteiner gelding is, Buck was especially pleased with today’s performance which scored 27.4. Buck has been adjusting his horses’ nutrition, which seems to be paying off.

“He feels to me better than he ever has. I’m working with my racehorses at home, and we started training and feeding him like a racehorse, so hopefully it shows up tomorrow.”

But back to the dressage: “He’s pretty good at that bit,” Buck said. “David [O’Connor] helped me a bit with a few thing to make sure I was in the right frame. I actually just rode him with only two or three fingers off the reins just to keep him out. He’s been there now a few times, and he always delivers.” 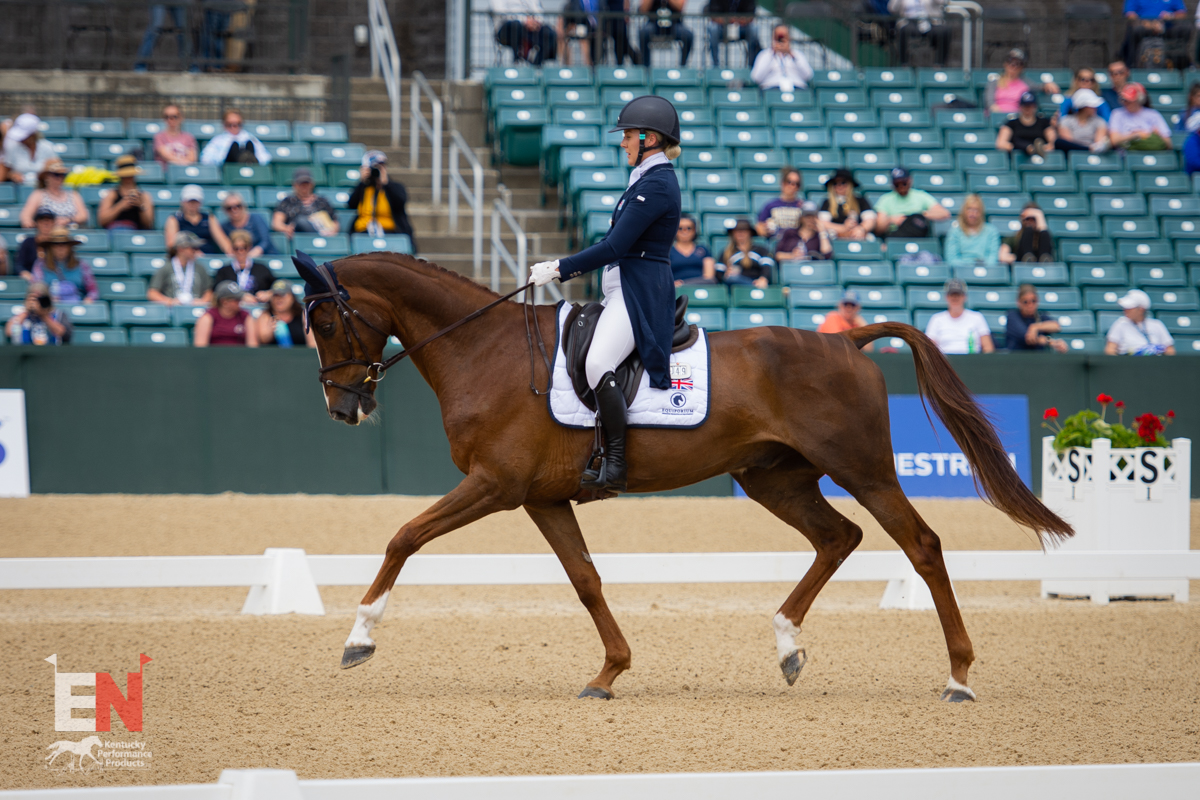 25-year-old Yasmin Ingham may be the youngest rider in the field, but she comes with two previous five-star experiences. A rising star on the British scene, Yaz has won every national age title she could aboard Jeanette China and Sue Davies’ Banzai du Loir (Nouma d’Auzay x Gerboise du Cochet) and now she’s narrowing in on a competitive finish in the horse’s first five-star. Their dressage score of 28.1 partnered with the horse’s natural athleticism and phenomenal jump will should keep them in the hunt.

“We got him from France in 2019. We’ve very slowly gone up through the levels and not rushed anything. He’s such a young and special horse that we think it’s good to take it slow and educate him properly and always confidence first with him,” Yaz said. 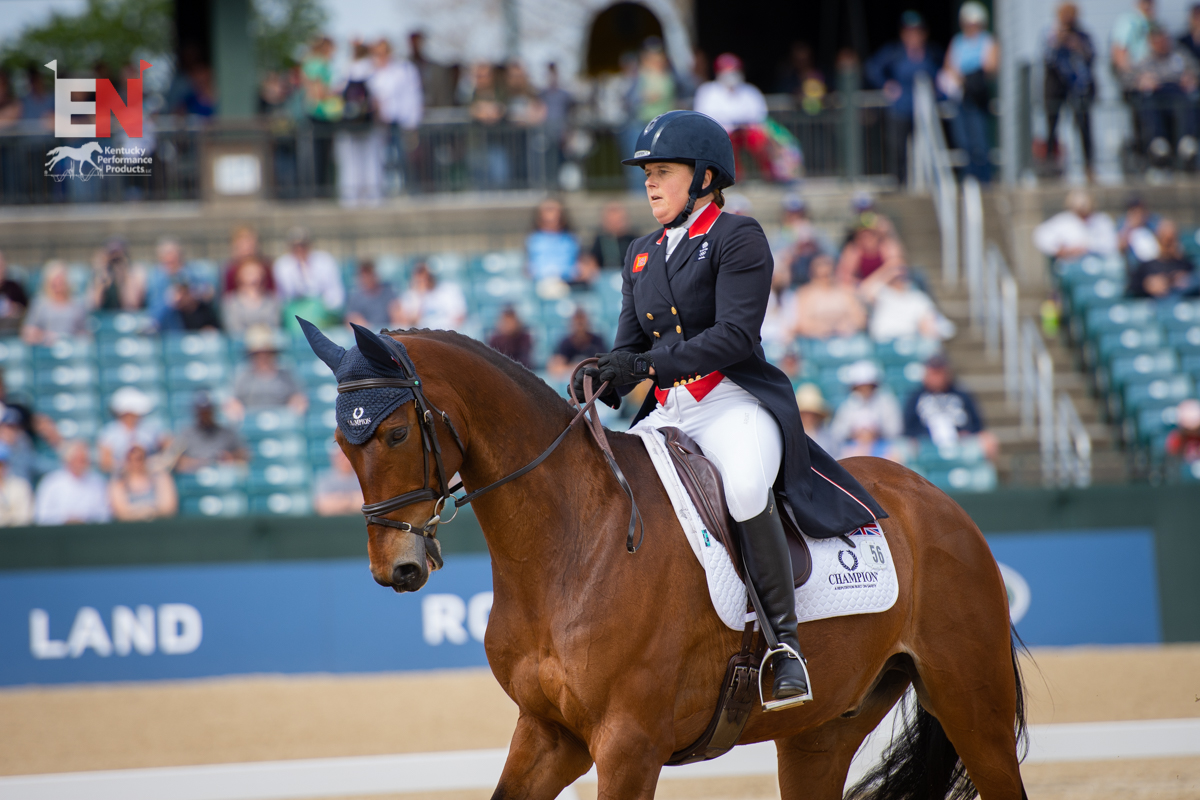 Five-star debutante Maybach may sometimes stand in the shadows of some of Pippa Funnell’s other top horses, but today he’s earned his own spotlight. S.H.E Eventing’s Swedish Warmblood (Jaguar Mail x Lady Micra), who hasn’t score outside the 20s since 2018, sits on 29 for fifth place. 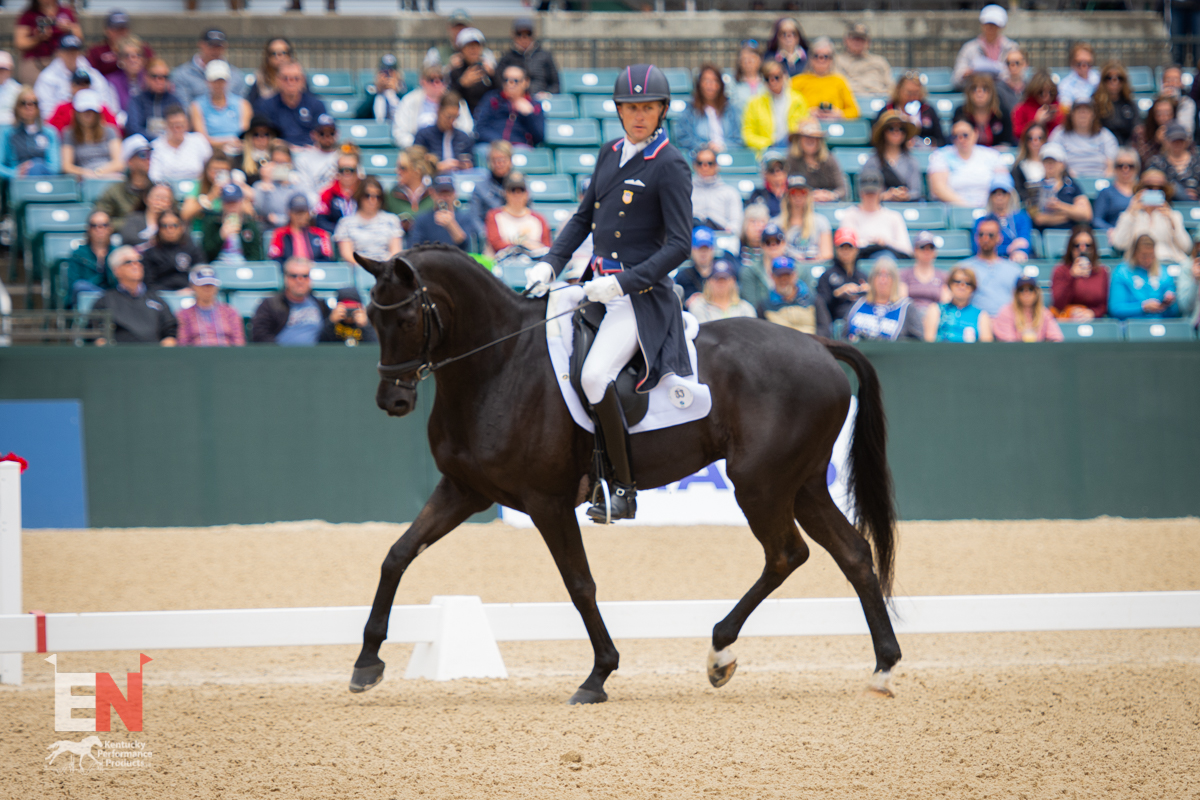 Previous USEF CCI5* National Champions Boyd Martin and Tsetserleg (Windfall x Thabana) slot into sixth place. “Thomas,” who has already represented the United States at the Pan American Games and the Tokyo Olympics, earned on a score of 29.3. 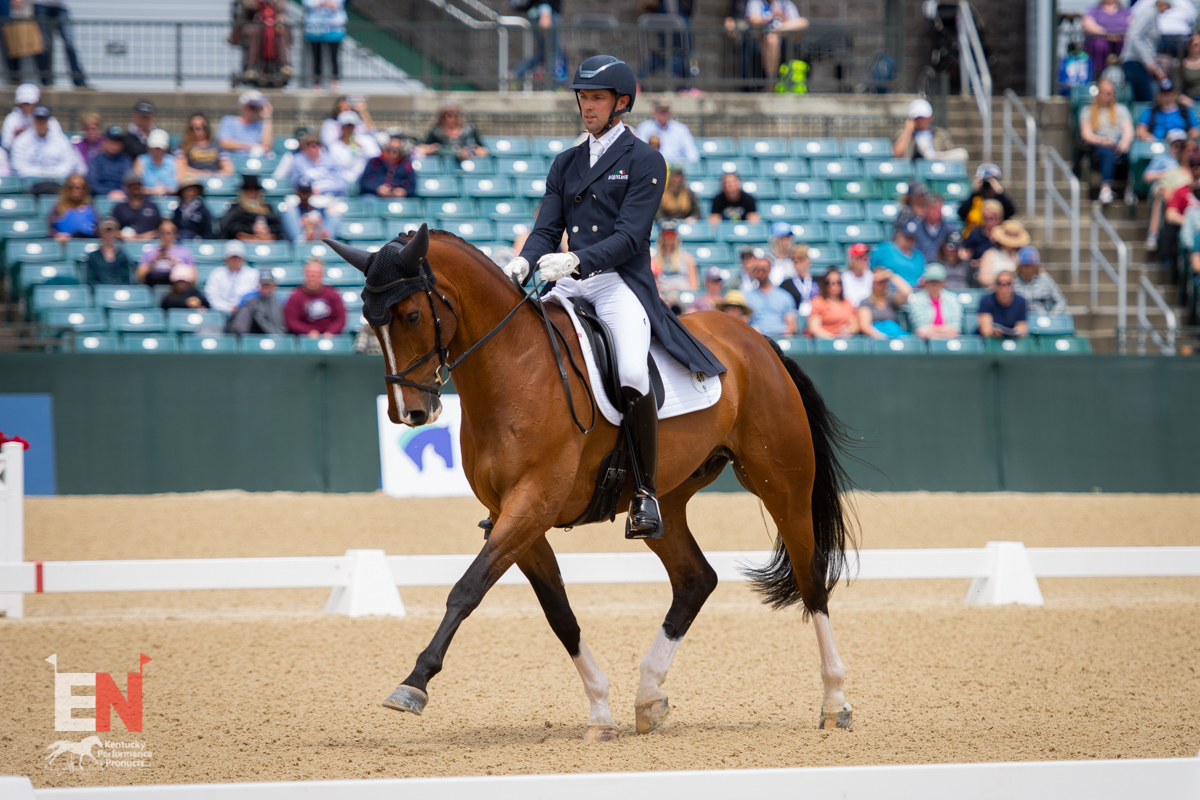 Will Coleman is looking forward to the jumping challenges ahead after a dressage effort where he believes he left “points on the table” with Off The Record (Arkansas VDL x Drumagoland Bay). “It wasn’t maybe the best the horse can do, which is sort of what you shoot for at these big, long, five-star events. I think I did the best I could with what we had today and we’ll just try to finish on it,” he said. The pair is in seventh on 32.5 points.

Thursday’s leaders Tamie Smith and Fleeceworks Royal have found themselves in eight place at the conclusion of the first phase. 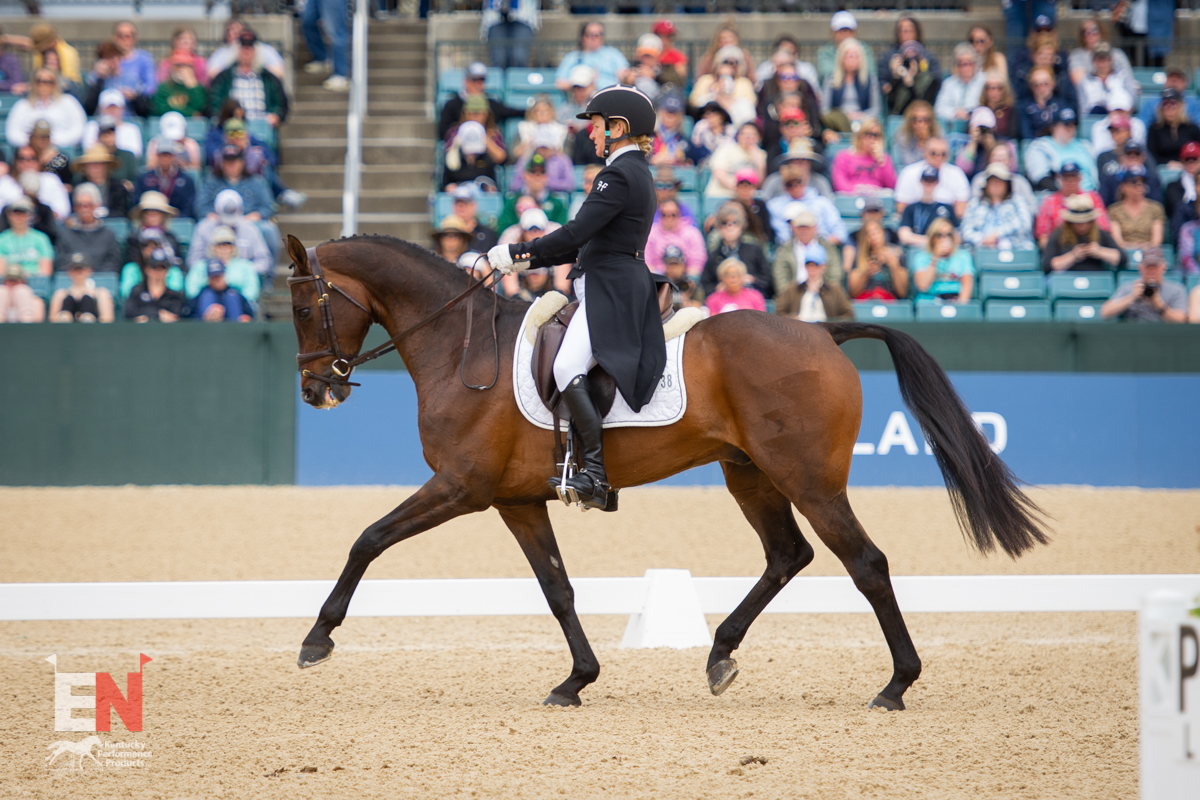 New Zealander Jonelle Price sits in ninth place. She earned a score of 33.4 with the 15-year-old Holsteiner McClaren (Clarmio x Toni), who was previously campaigned by Mark Todd.

“It’s a bit harder when you get an older horse in life no matter who they’ve come from. It’s more difficult tuning an old horse to your thinking. When I get something a little bit older down the track I always think I’ll improve it quickly, but the benefit of hindsight is that it takes at least 12 months to truly cement that partnership and get them more in tune with your aids. He’s been a joy to take over from no better man than Mark Todd,” she said.

Looking to the scoring, of the 45 competitors, just six snuck in under the 30 mark, in a year that rider’s have called “tough judging.” Across both days dressage trends remain consistent across judges, with Gretchen Butts scoring the harshest on average at H, Christian Steiner giving the best marks from B, and Nick Burton consistently falling in the middle from C.

Kentucky, as always, won’t be a dressage competition, but for the first time the first phase leader has a pole in hand, meaning at least a four-point lead, after the first phase, giving Michael plenty of room to play with a few time errors tomorrow if necessary.

We now look ahead to Derek di Grazia’s task at hand tomorrow. Luckily the weather forecast for Saturday has improved significantly, lowering the chance of rain to 24% at the time of publication, with no storms in the forecast. We previewed Derek’s track earlier today, you can click here to read it. The 4*-S will be the first to take to the cross country at 9 a.m. EST, followed by the first 5* horse on course at 12:50 p.m. You can watch live on USEF Network in North America here or on H&C+ internationally here.

Shelby Allen and Tilly Berendt contributed to this report. 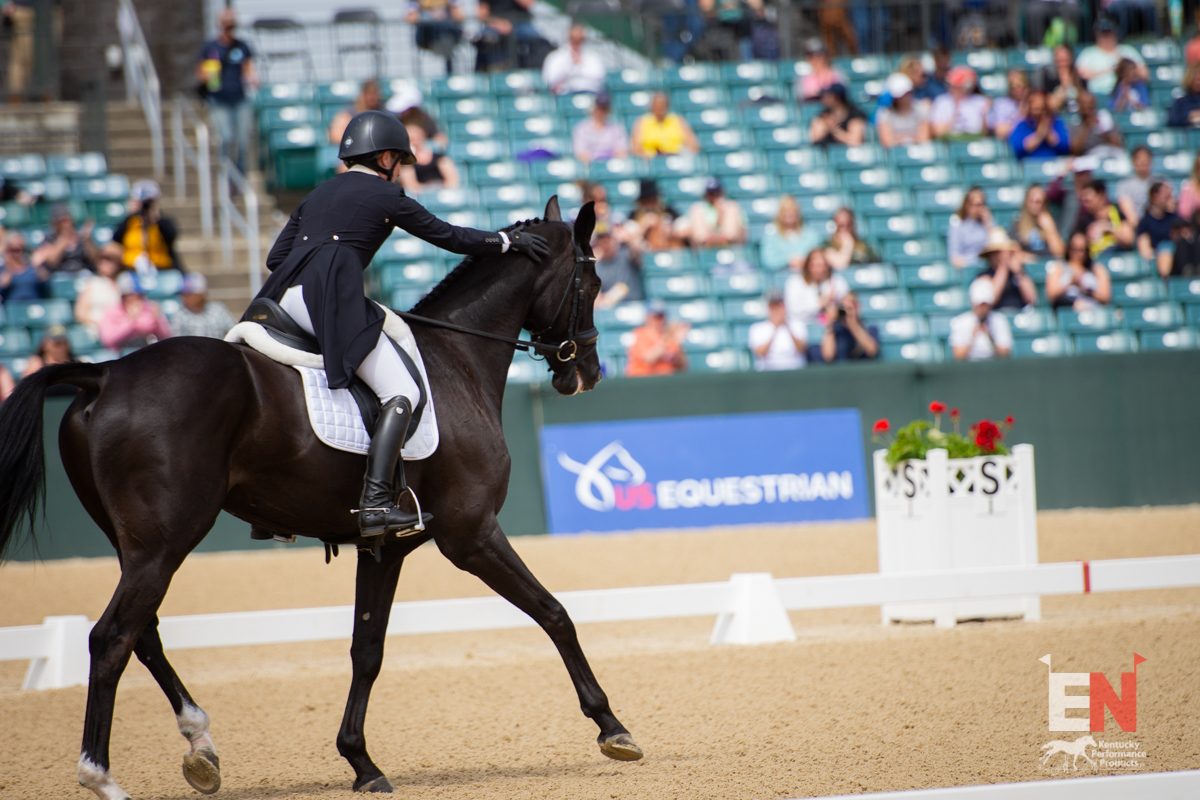 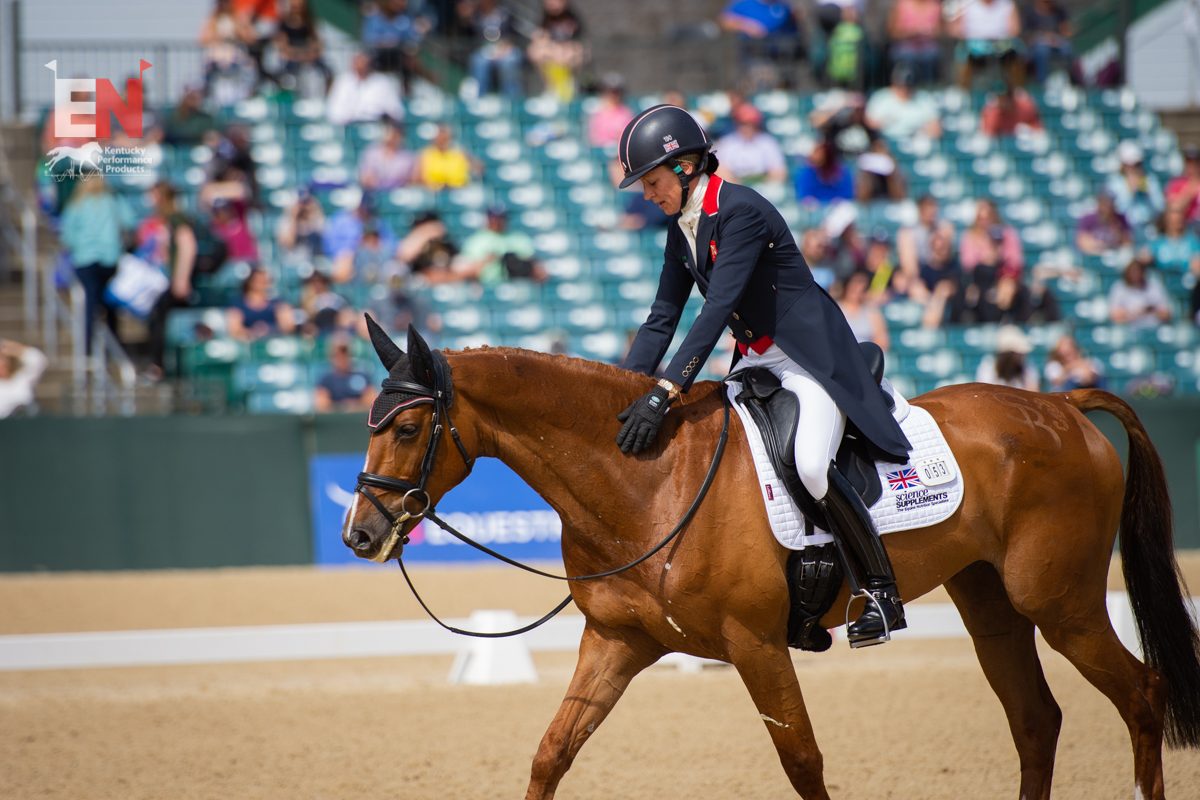 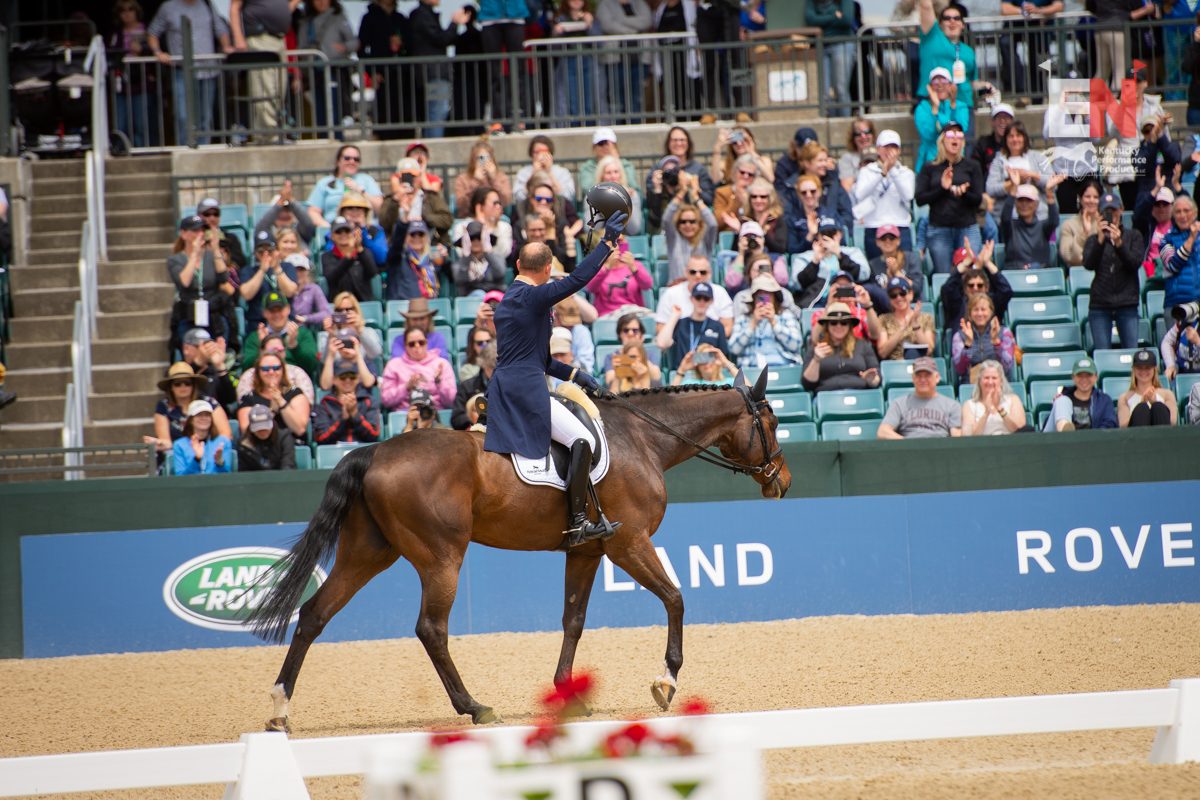 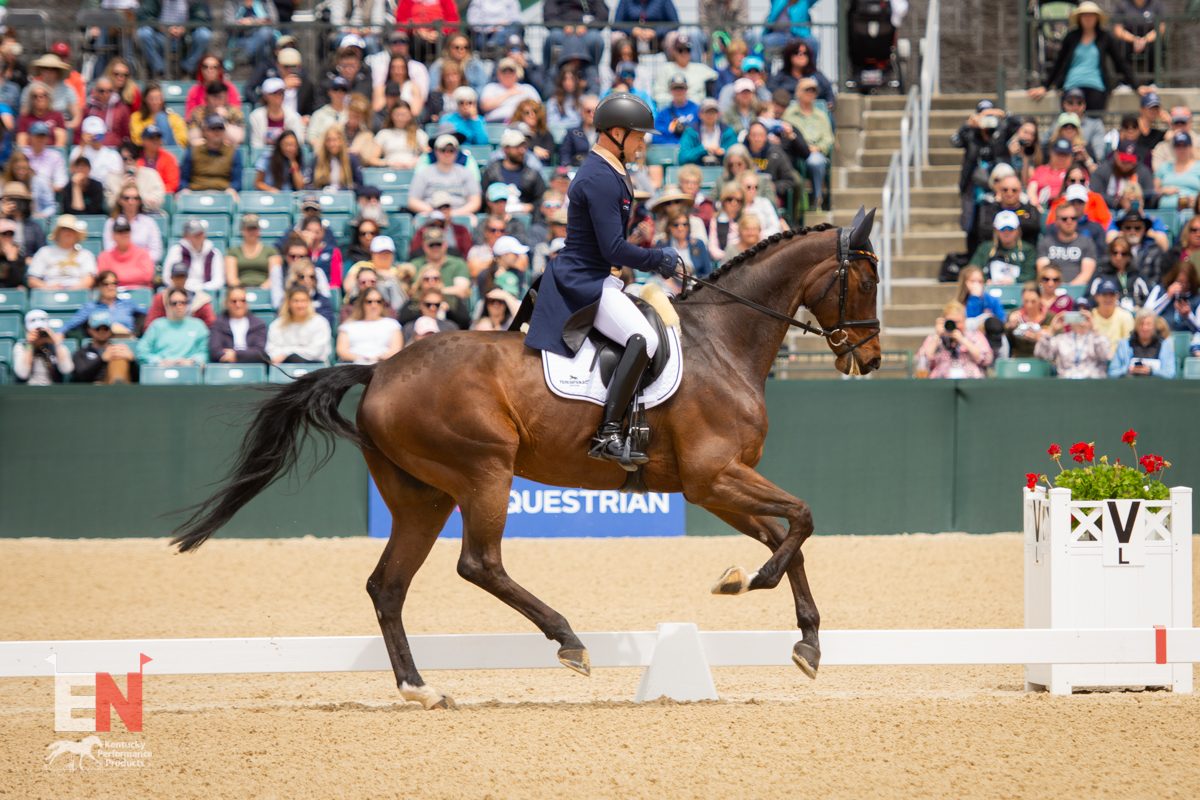 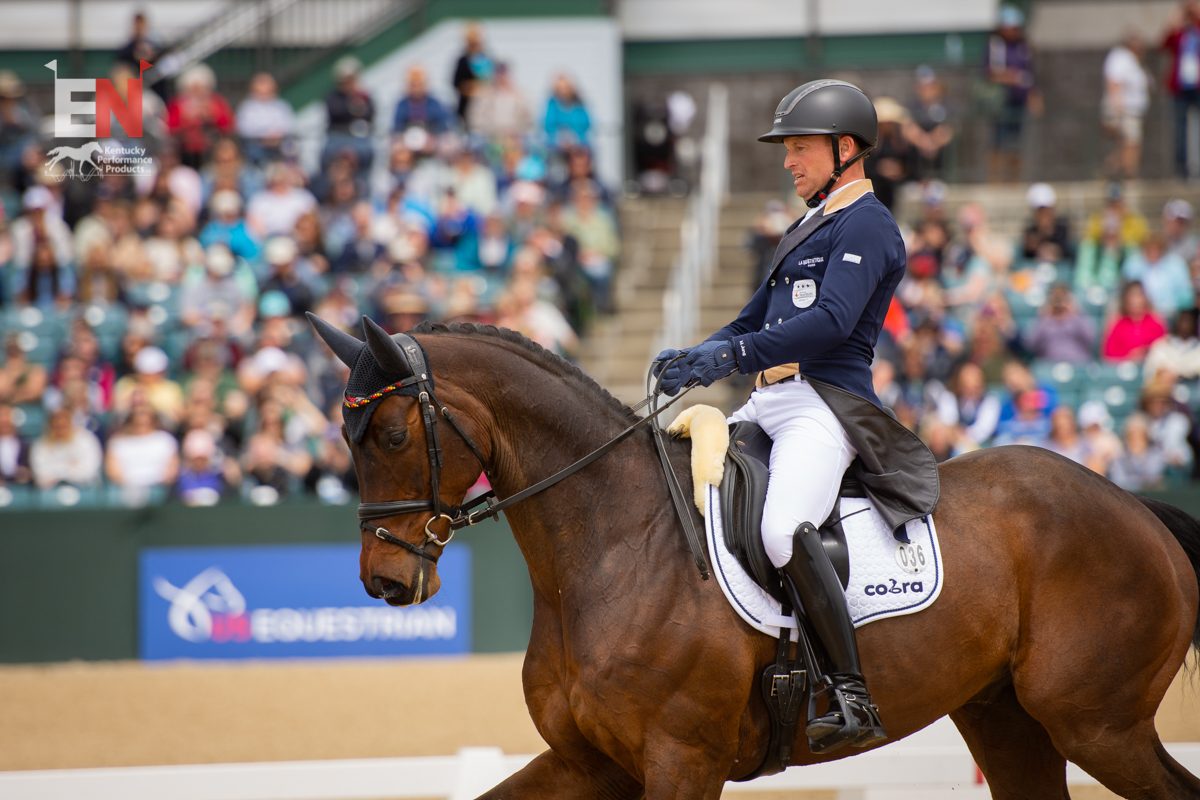 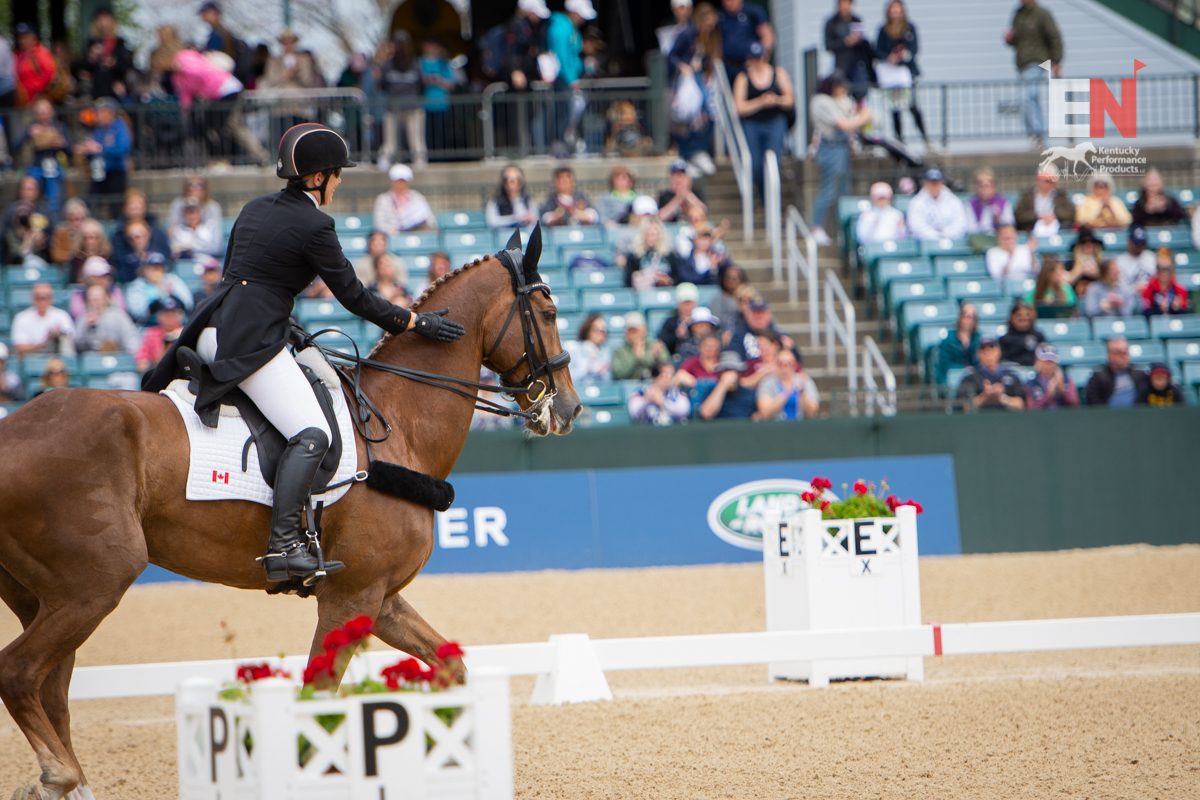 Lisa Marie Fergusson and Honor Me. Photo by Shelby Allen. 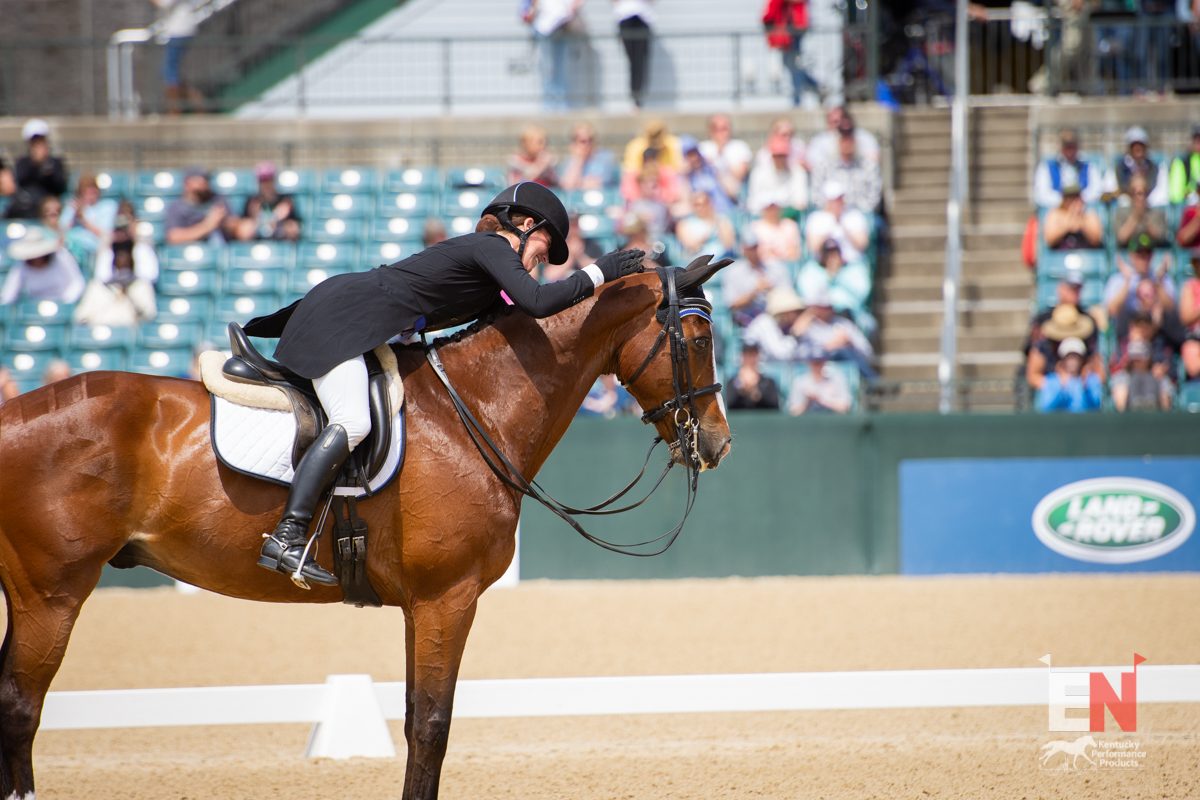 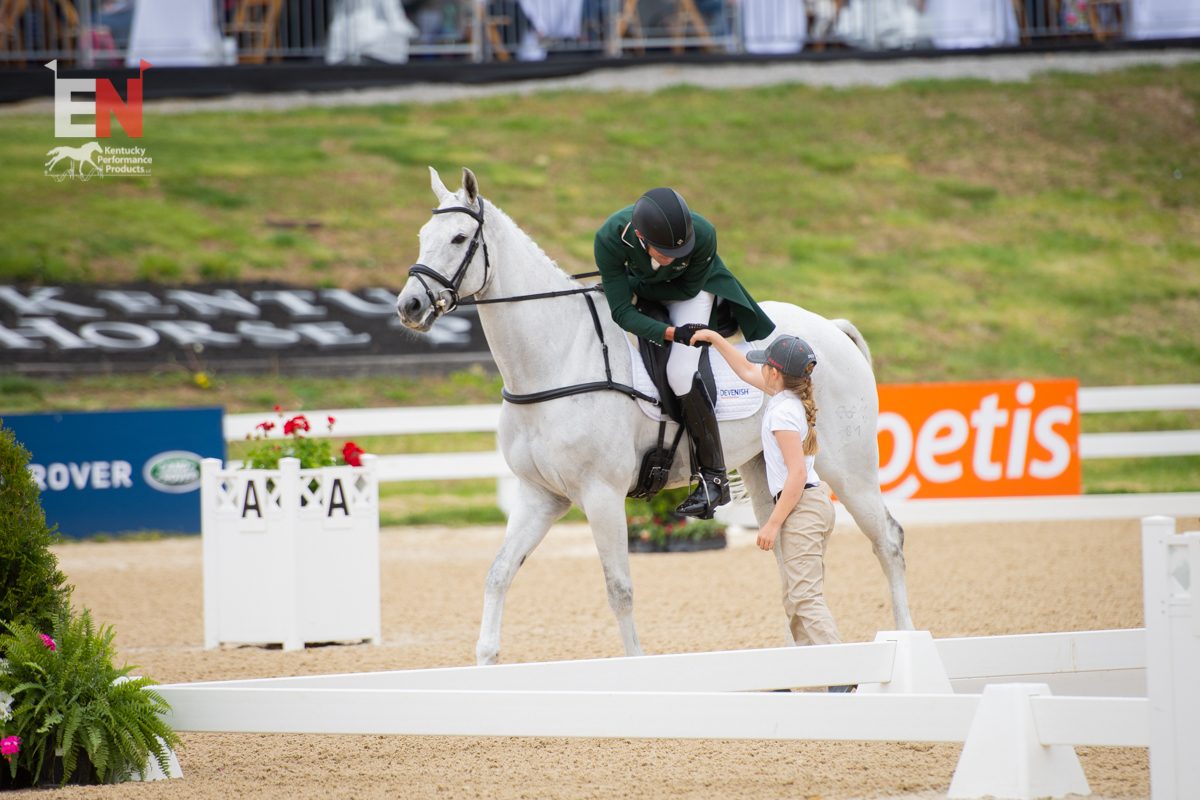 Joseph Murphy thanks local pony clubbers for volunteering after his test. Photo by Shelby Allen. 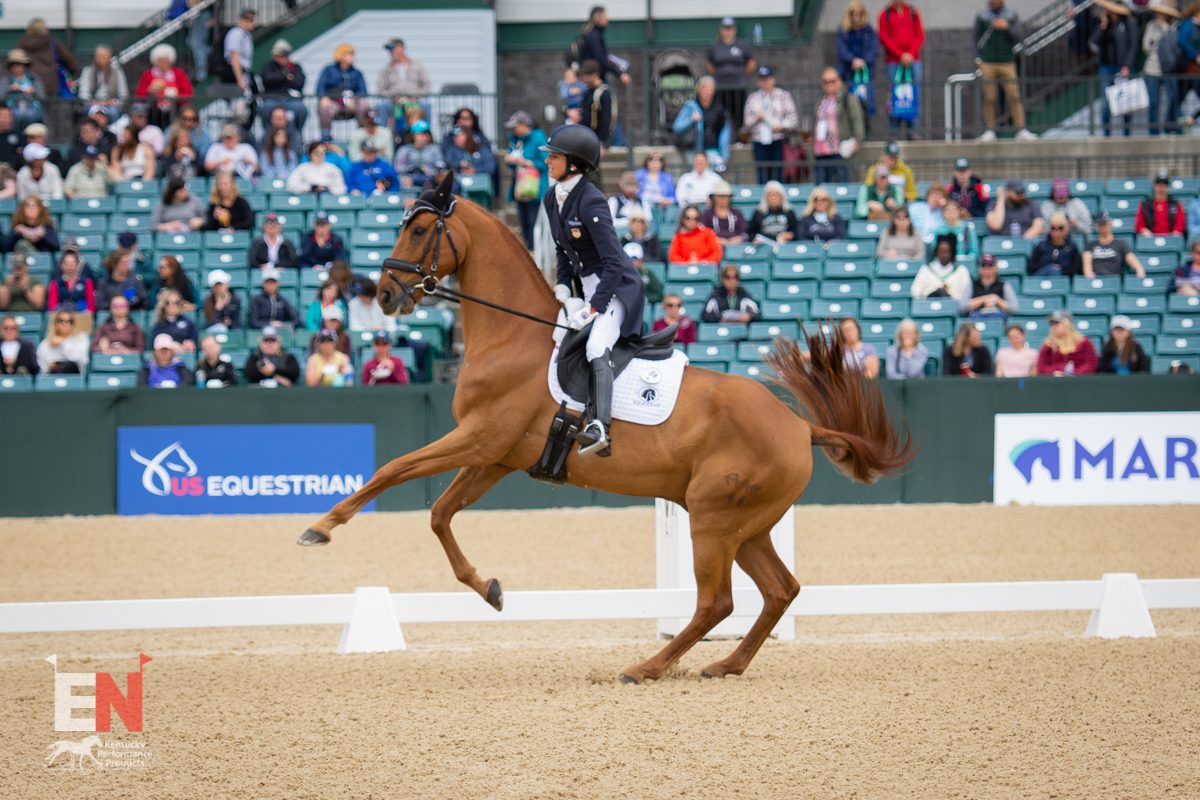 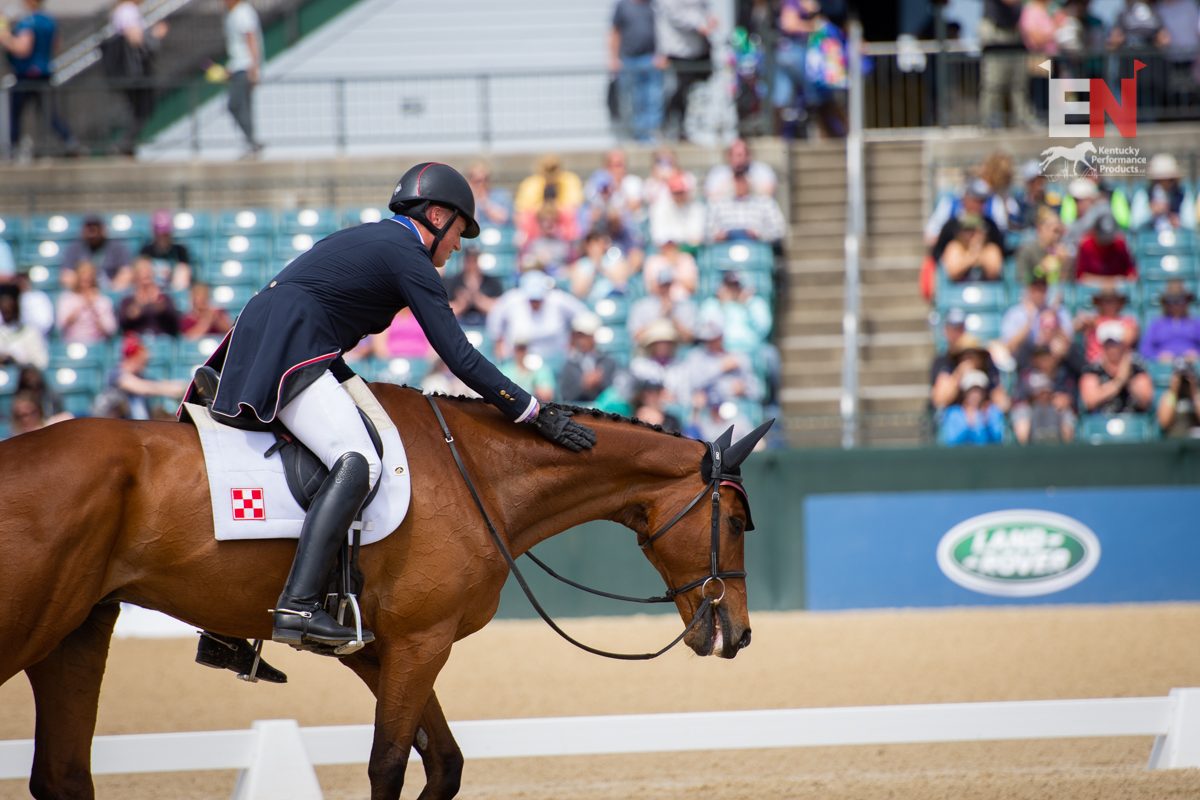 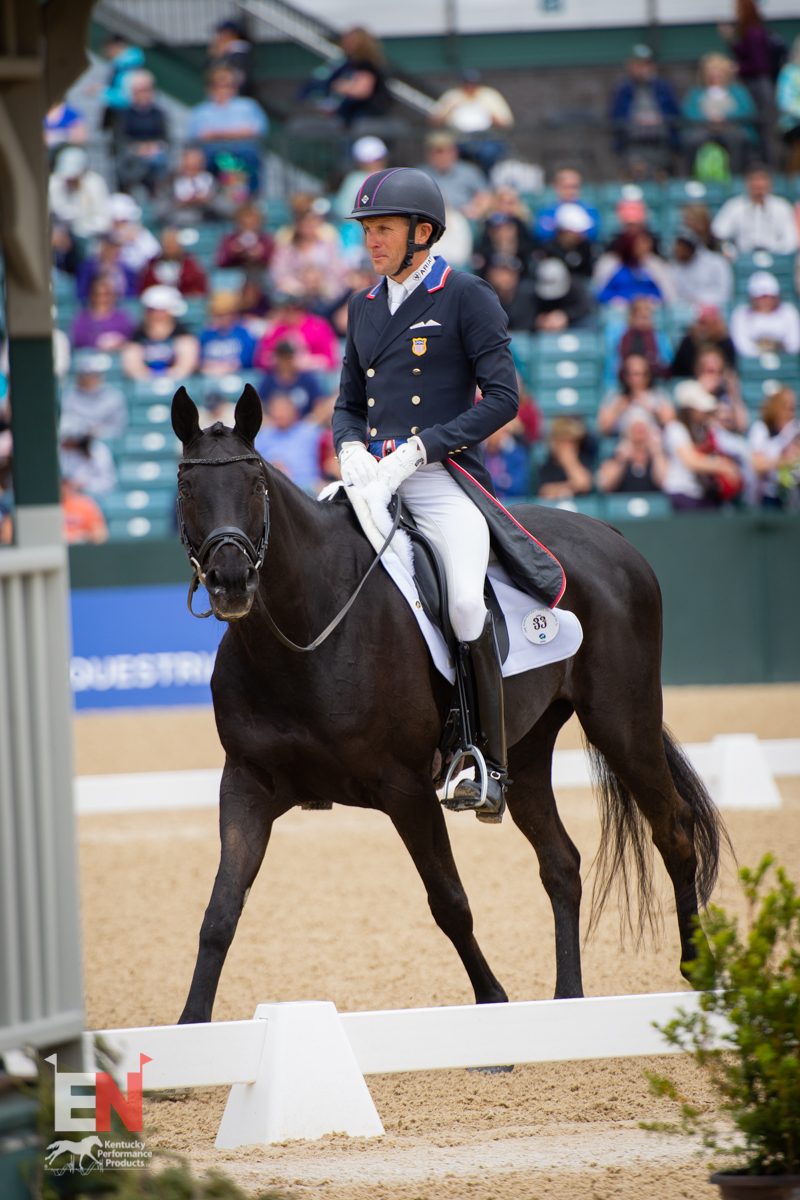 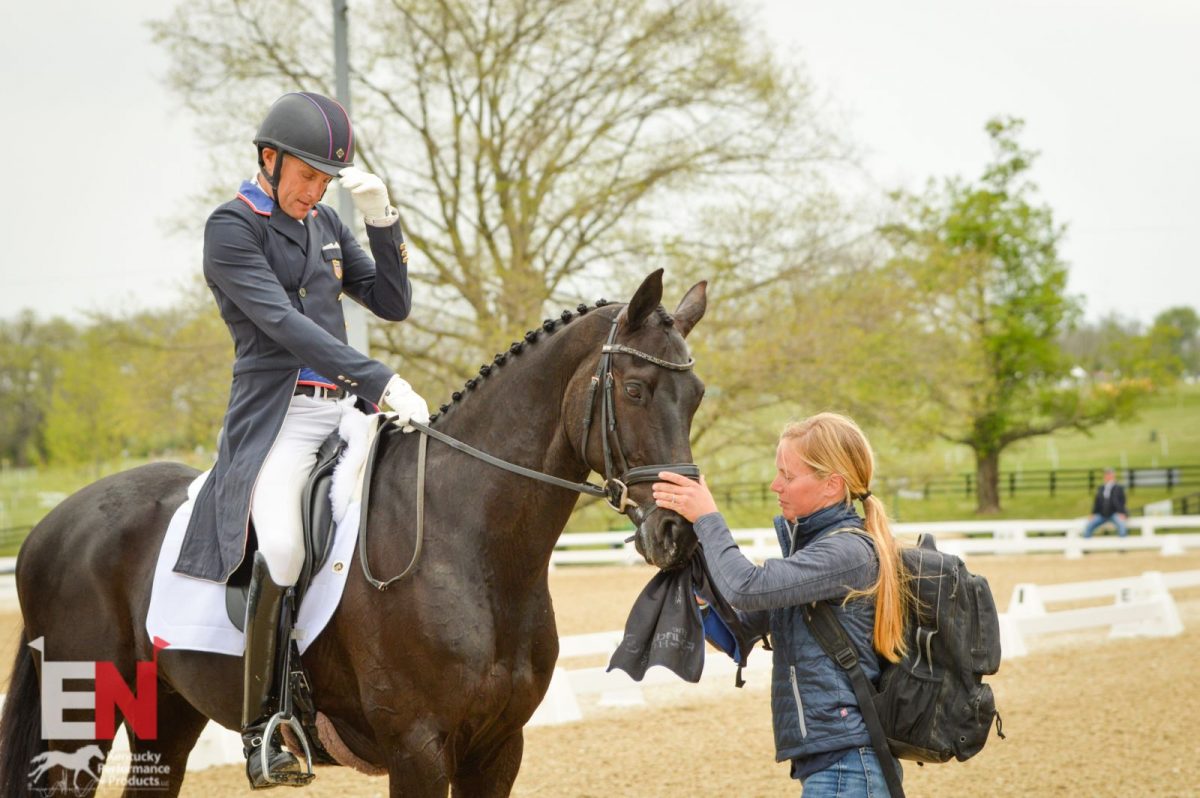 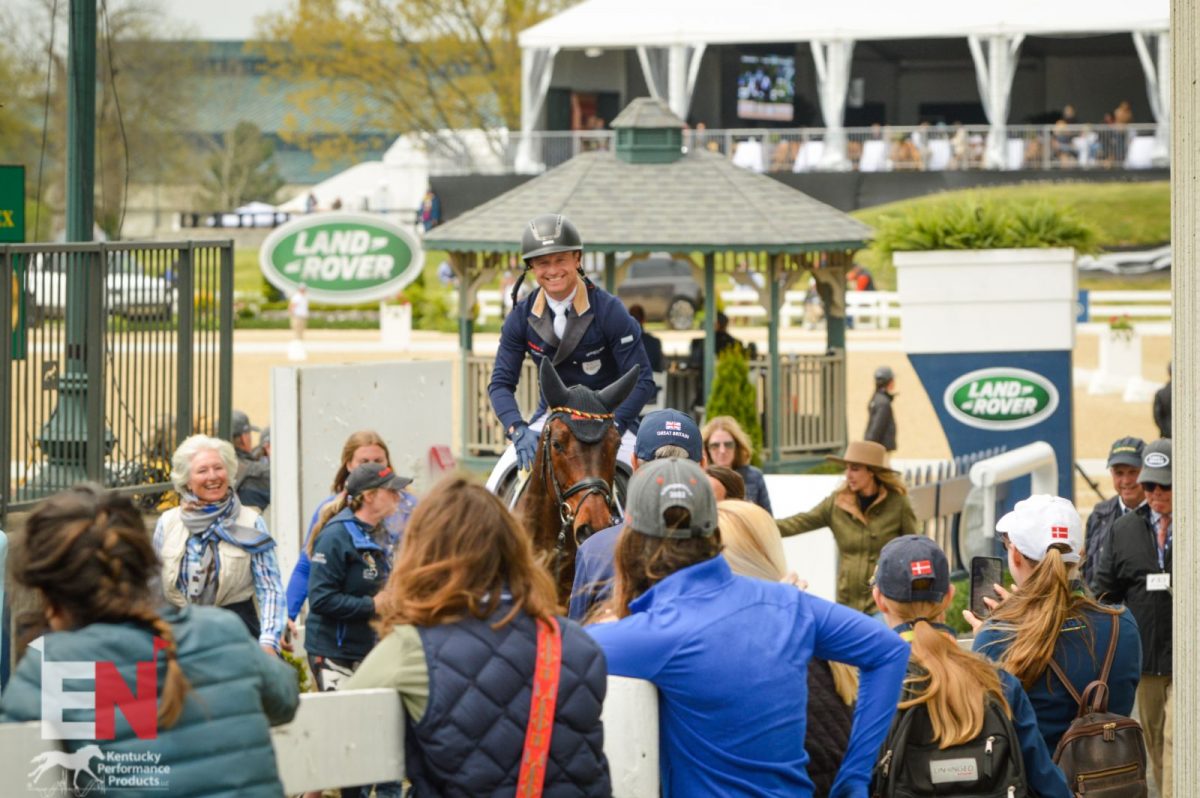 Michael Jung is all smiles after a leading dressage test. Photo by Abby Powell. 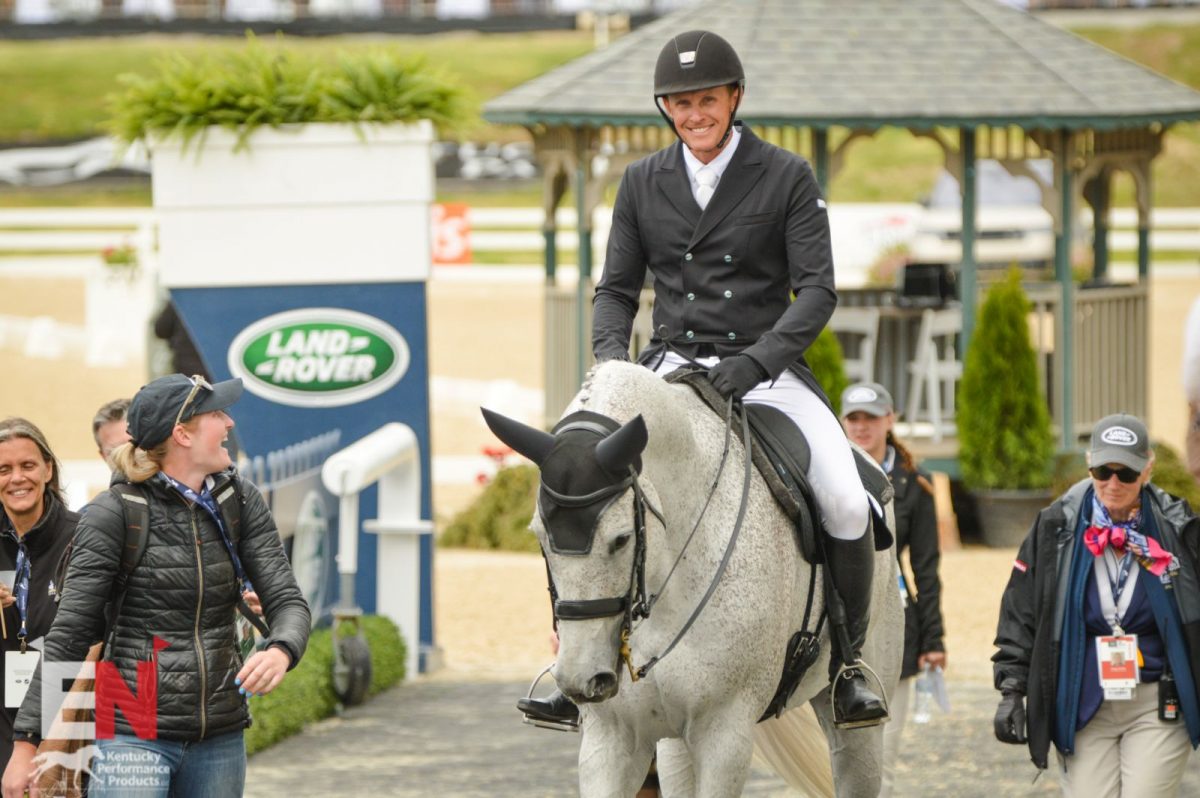