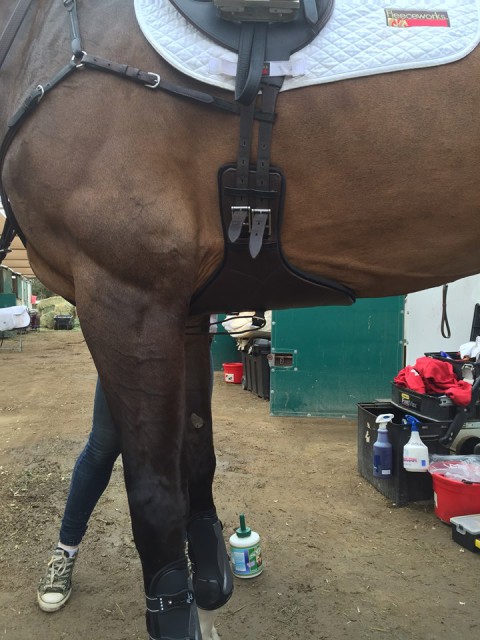 When Tamie Smith felt the horse underneath her wobble after a show jump at Jersey Fresh earlier this year, she wasn’t sure what to think. Later, she’d see photos and videos of Fleur de Lis catching his show on the belly guard of his girth and ripping it from his hoof. A freak incident, right?

“It was kind of a perfect storm,” Tamie said. “(Fleur de Lis) is a really good jumper up front, so he hits himself which is why he wears a belly guard. He had a bar shoe on at Jersey, and the timing of how he could have placed his foot in that perfect area was just unbelievable.”

Indeed, it was an incident that not many can say they’ve witnessed — somehow, Fleur de Lis hooked his shoe onto the clip of the belly guard, causing the shoe to rip when he subsequently put his leg down. Needless to say, Tamie and “Milton” were unable to complete the course, and it was something that both Tamie and Total Saddle Fit mastermind Justin Baghai kept thinking about long after it happened.

“After the video came out, a lot of people told me that they’d had the same issue, especially in the show jumpers,” Tamie said. “So it surprised me that no one had done anything to come up with a solution, and that’s where Justin came in.” 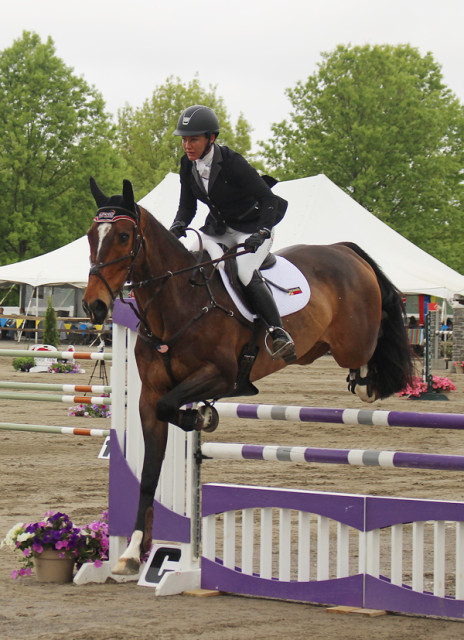 The moment when Fleur de Lis caught his shoe on his girth. Photo by EN reader Erin Soboleski.

Adjacent to the offices of Total Saddle Fit in San Diego, California is a workshop where Justin and his staff can exercise their creativity and fiddle with new ideas on the fly. “We didn’t talk too much about it at first, but I had started playing with ideas once I saw the story on what happened,” Justin said.

With the leather and sewing machine at his disposal, Justin fashioned a new belly guard for Tamie to try out. “Typically, on a normal girth, there is a clip that looks like a caribiner,” Tamie said. “They’re usually embedded in the leather, but obviously things can still get caught on them. So what Justin did is he created a buckle for the breastplate to hook to. That way if something were to get caught, the leather would break.”

The other principle behind the design is that the attachment for the breastplate was moved slightly farther back in hopes that it would be more out of the way of a wayward hoof. “We’re still using the Shoulder Relief concept, but we played around with it a bit to make this work,” Justin said. “That’s kind of what we use our shop for, if we have a different request or something new we want to work on, we can do it right then and there.”

Since Jersey Fresh, Tamie has been able to take Fleur de Lis out in the show jumping ring and has really enjoyed her redesigned girth. “He’s done really great, and it’s given me some peace of mind knowing that the chances of that happening again are slim. The great thing about (Total Saddle Fit) is that they’ve been super great about coming up with new ideas and working with the riders on what works and what doesn’t. They want to ensure that things like this don’t happen again.”