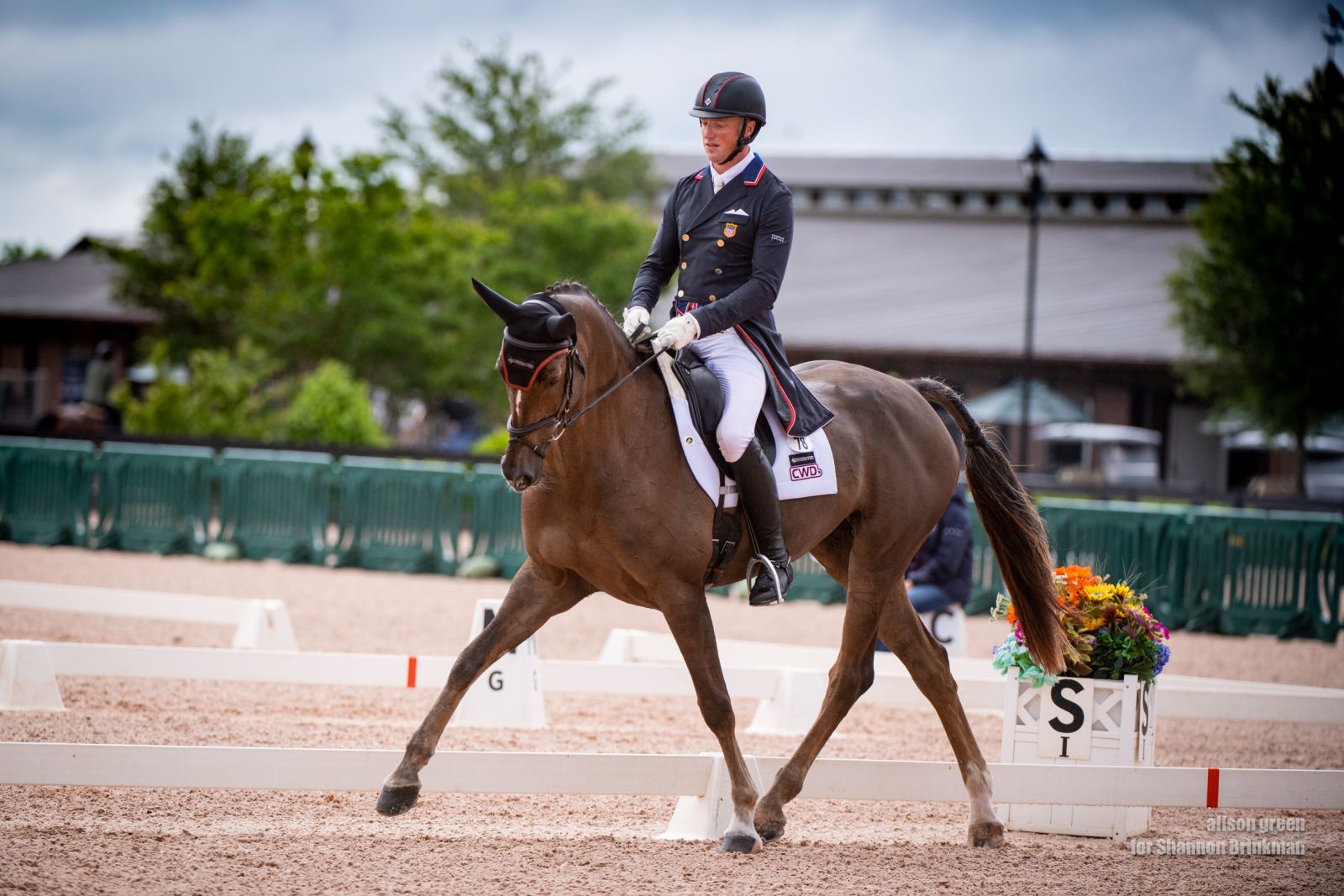 Big picture is the name of the game for Doug Payne, who invariably seems to have a slew of horses stepping up the levels in succession; after the announcement of Vandiver’s retirement over Kentucky weekend, it was Quantum Leap who stepped up into the spotlight and earned the top American prize in the 5*. If Doug’s strategy continues to pay off, it might be Starr Witness who’s next to be tapped as the horse of the future. At the conclusion of dressage at Tryon’s May 4*-L, she’s found herself once more in command after earning a 24.9 from the judging panel of Robert Stevenson (USA), Katarzyna Konarska (POL), and Valerie Pride (USA).

You could hear the groans of dismay all the way from the rider’s tent in the vet box as Doug pitched over Starr Witness’ shoulders coming into the influential Park Question on cross country at Kentucky last month. It was primarily a fluke: the 11-year-old mare by Chello III VDL and owned in partnership with the Paynes as well as Laurie McRee and Catherine Winter just seemed to stop in mid-air over the rail into the coffin, and the landing side was steep enough to pitch both horse and rider off balance after the sudden loss of momentum. Neither was worse for the wear as the mare calmly grabbed a snack of bluegrass and Doug dusted off his britches, and at any rate, Kentucky was never the main goal for this spring.

“We came to be as competitive as we can,” Doug said of this weekend at Tryon. “She’s starting to get more and more consistent — just stronger and more confident and it’s super exciting.”

But this weekend is still a part of a bigger plan; Doug’s working backwards from the Pan American Games in Chile next year and, ultimately, the 2024 Olympics in Paris. This is a mare that only began eventing in 2018, having spent the first part of her career as a show hunter with Emil Spadone. And while didn’t exactly need to learn how to jump when her career path changed, she still needed to learn the tricks of the trade on cross country as well as establish a foundation of fitness — and it’s the latter that’s been Doug’s primary focus given her later start to the sport.

“She wouldn’t have as much blood a Quantum or Vandiver and wouldn’t have done any real galloping before the age of seven,” Doug pointed out. “So I do think the horses that, say, we start as four year olds — not that you’re doing a bunch of wicked fitness that young, but you’re doing a lot more of that type of work. I think their fitness progressively builds if you lay a good foundation early on, so I would consider that to be her biggest challenge.”

Nonetheless, she’s stepped up to every assignment placed in front of her; Courtney Carson even noted in one interview that she felt perhaps “Gin” was under-stimulated in the hunters. The technicality of eventing, then, would be right up her alley. “If you were to pull her record, it looks quick but you didn’t fundamentally have to teach her how to jump,” Doug notes. “And the flatwork just takes time. It just was about introducing her to the tricks of cross country, and now she’s getting to be pretty reliably competitive.”

So despite the fact that she conceivably could and would have gone around a 5* this spring, it’s the attention to the end goal that has kept Doug from stepping up — she’s qualified, but there’s not much point to upping the ante this early, and there’s plenty of time to finish confirming her, competitively, at this level.

Of course there remains an entire weekend ahead for the Payne crew, which also includes Doug’s as well as Patrice Rado’s Camarillo in his first 4*-L as well as the stallion Quiberon in the 3*-L, and this track is walking tougher than the last time Doug was here for a long format in 2020. It’s a 10 minute, 9 second Capt. Mark Phillips track with 40 jumping efforts set across 28 numbered obstacles, and of course competitors will test their fitness with a run up “The Hill” at the end.

If you want a little peek behind the scenes with Doug, #supergroom Courtney Carson has taken over EN’s Instagram today — click here and watch our story to catch up!

You can view the full map of the course here. 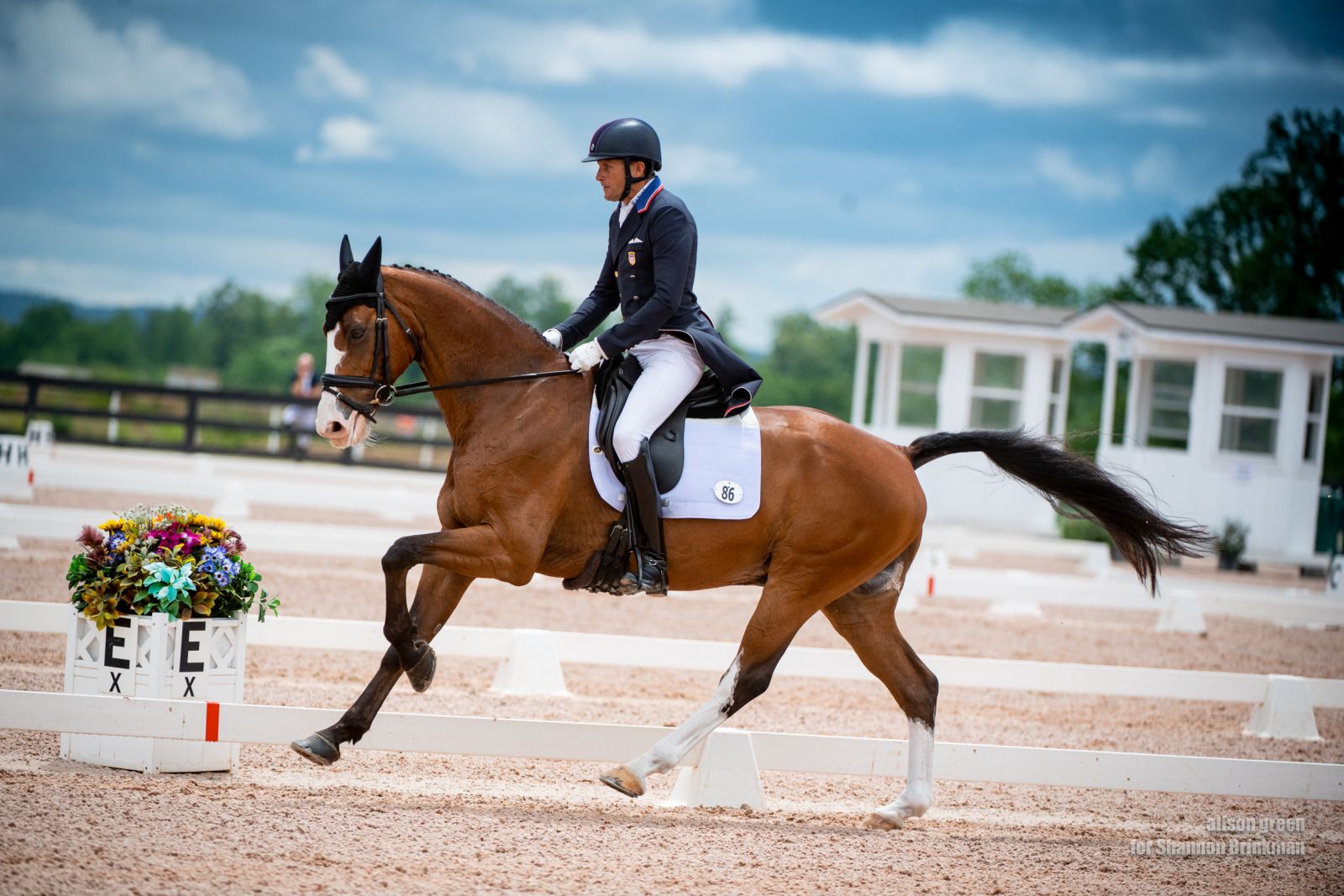 Boyd Martin and Fedarman B. Photo by Shannon Brinkman Photography.

Boyd Martin has the Annie Goodwin Syndicate’s Fedarman B (Eurocommerce Washington – Paulien B, by Fedor) out for this relatively young partnership’s first 4*-L together, and they’ll take second place after the first phase on a score of 29.0. Boyd has always described the 12-year-old KWPN gelding as “mega-talented”, but as with any new partnership — especially one in which a horse has been produced by one rider since the age of three, as “Bruno” was by the late and great Annie Goodwin — there is a learning curve, even with Boyd’s depth of experience.

It was Bruce’s Field, the eventing showcase in Aiken earlier this year, that gave Boyd the feeling that his partnership with Bruno was beginning to gel. But, as he looks ahead to two more phases this weekend, he says he’s remaining fixed on what’s best for the building blocks.

“Probably our big turning point was Bruce’s Field,” Boyd said. “It was sort of a go-kart course, but he was just so brave and confident and really enjoyed it and I think that was sort of the first event where we both started to click. I don’t think we’re completely in sync yet, but definitely getting on the same page. I’ve sort of been a little cautious to go too fast on him but I feel like we’re building that partnership together and I’m sort of more looking at him as along term horse.”

Over the winter, a group of owners came together to officially form the Annie Goodwin Syndicate in Annie’s honor, and the plans have been laid to produce the horse to the best of his abilities, with confidence. “It’s a bit of a two-year plan where 2022 is getting him very confident around this four-star level,” Boyd explained. “And then if that all goes well, I believe the sky is the limit.”

This will be the biggest test this pair has seen so far, though Fedarman B has jumped around this track before, in 2020 with Annie. Boyd won’t be looking to hang about tomorrow, but another 4*-L toward the end of the season emerges as the goal where he’ll look to push the buttons a bit harder. 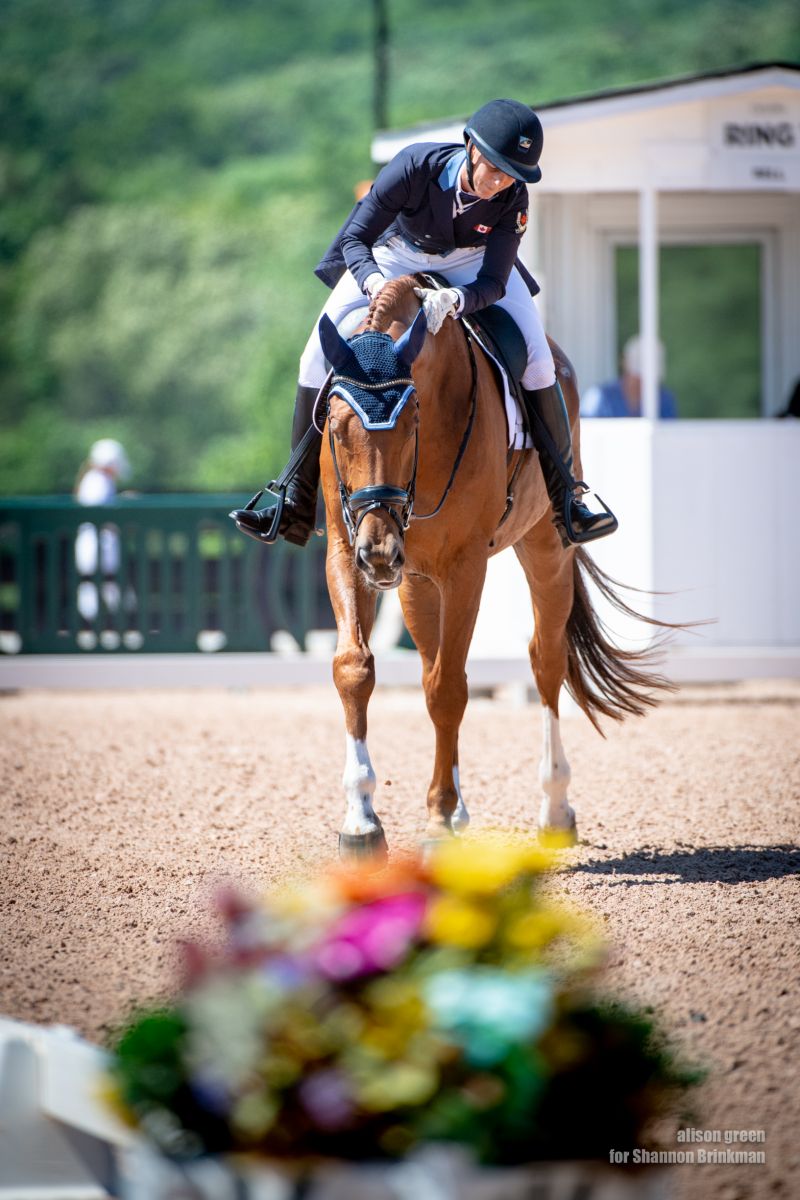 Third overnight in the 4*-L is Canadian rider Colleen Loach, whose talented rising stars I’ve probably waxed too much on at this point but not without reason. It’ll be Peter Barry’s Vermont (Van Helsing – Hauptstutbuch Hollywood, by Heraldik xx) who’ll be higher up ahead of stablemate FE Golden Eye to kick things off, earning a 29.3. Colleen called it a day after some trouble early on course in the Lexington 4*-S, but he’s jumped around plenty of 4* tracks as he’s progressed, including a clear round at Jersey Fresh last year that would lead him to a top-10 finish.

Colleen and Monty are in first place after the first round of dressage. Check out their lovely ride!

Posted by Colleen Loach Equestrian on Thursday, May 12, 2022 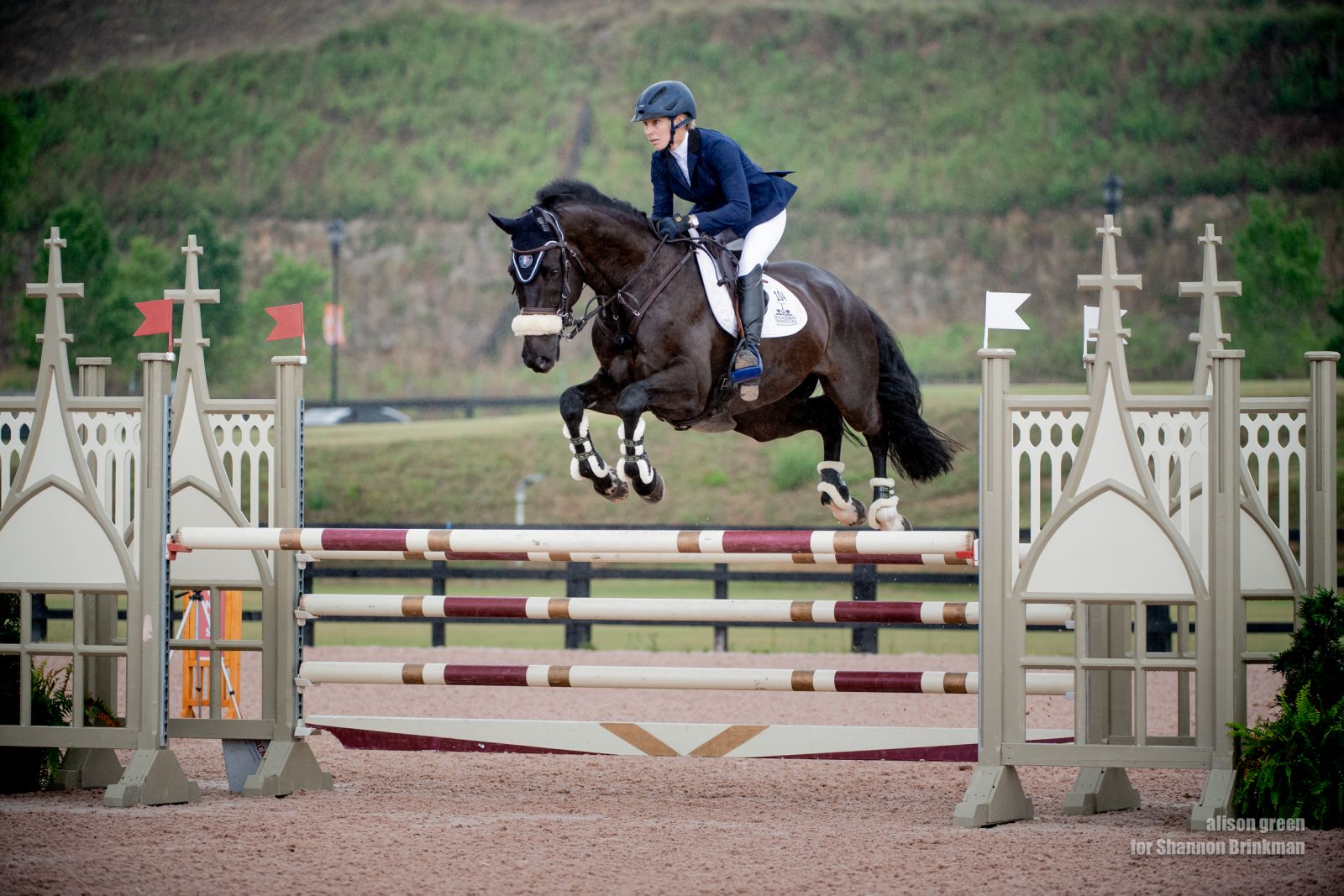 In command of the 4*-S running this weekend is Liz Halliday-Sharp, who’s got four horses here, three of which are in the top two in their respective divisions, and The Monster Partnership’s Cooley Moonshine (27.2). The 10-year-old Irish gelding by Cobra also ended his Lexington 4*-S weekend early at that pesky Park Question, but he’s got a clear show jumping to add to his weekend here at Tryon so far and will likely look for a confidence-building rebound tomorrow on cross country. 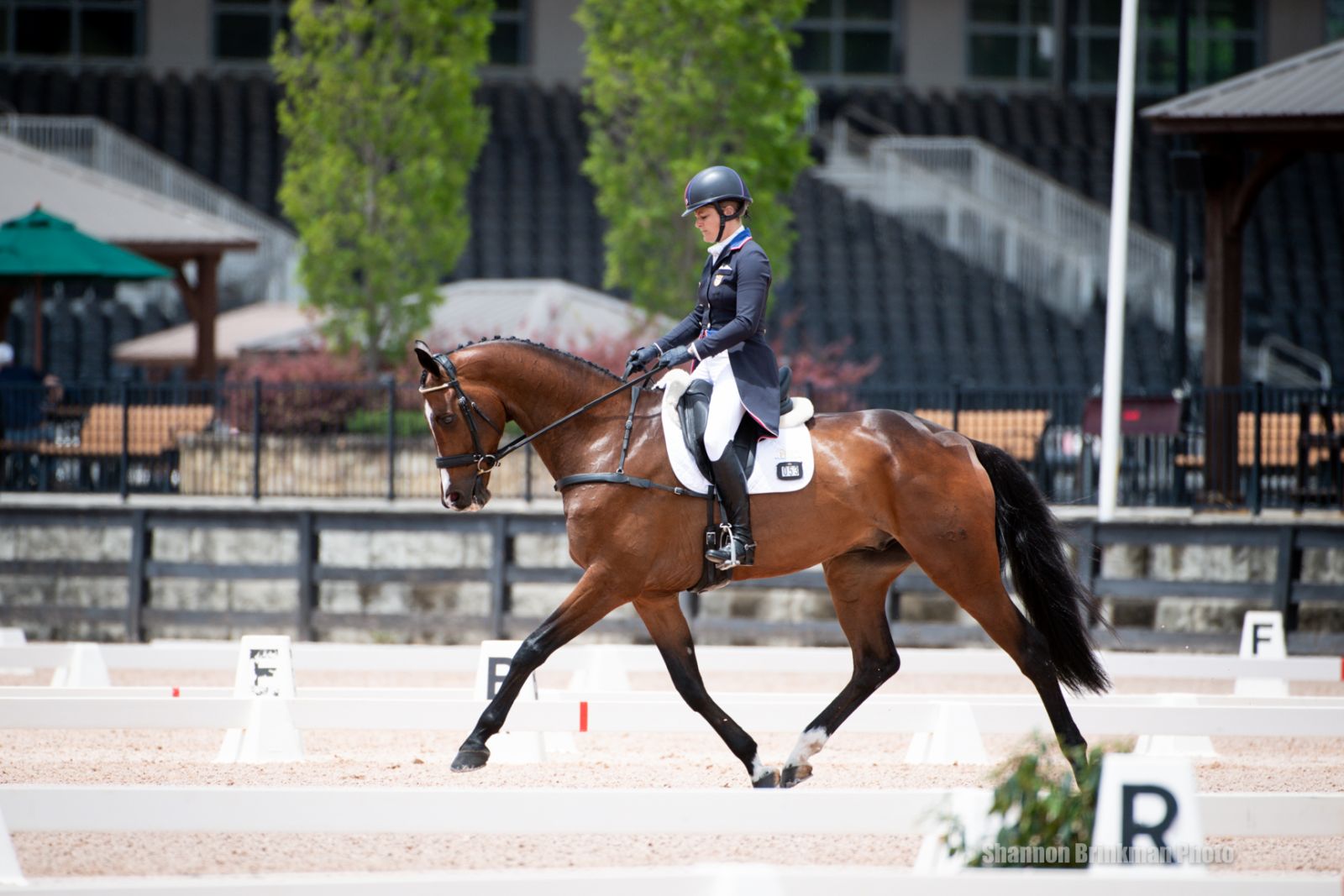 Leading the way in his first 3*-L is Global Cassero 3, piloted by Lynn Symansky and owned by The Jerry Syndicate. The 11-year-old German Sport Horse gelding by Conteur has been partnered with Lynn since 2019. He stepped up to the 3* level in 2019, but in the two years following primarily focused on national competition before coming back out at 3* in March of this year. 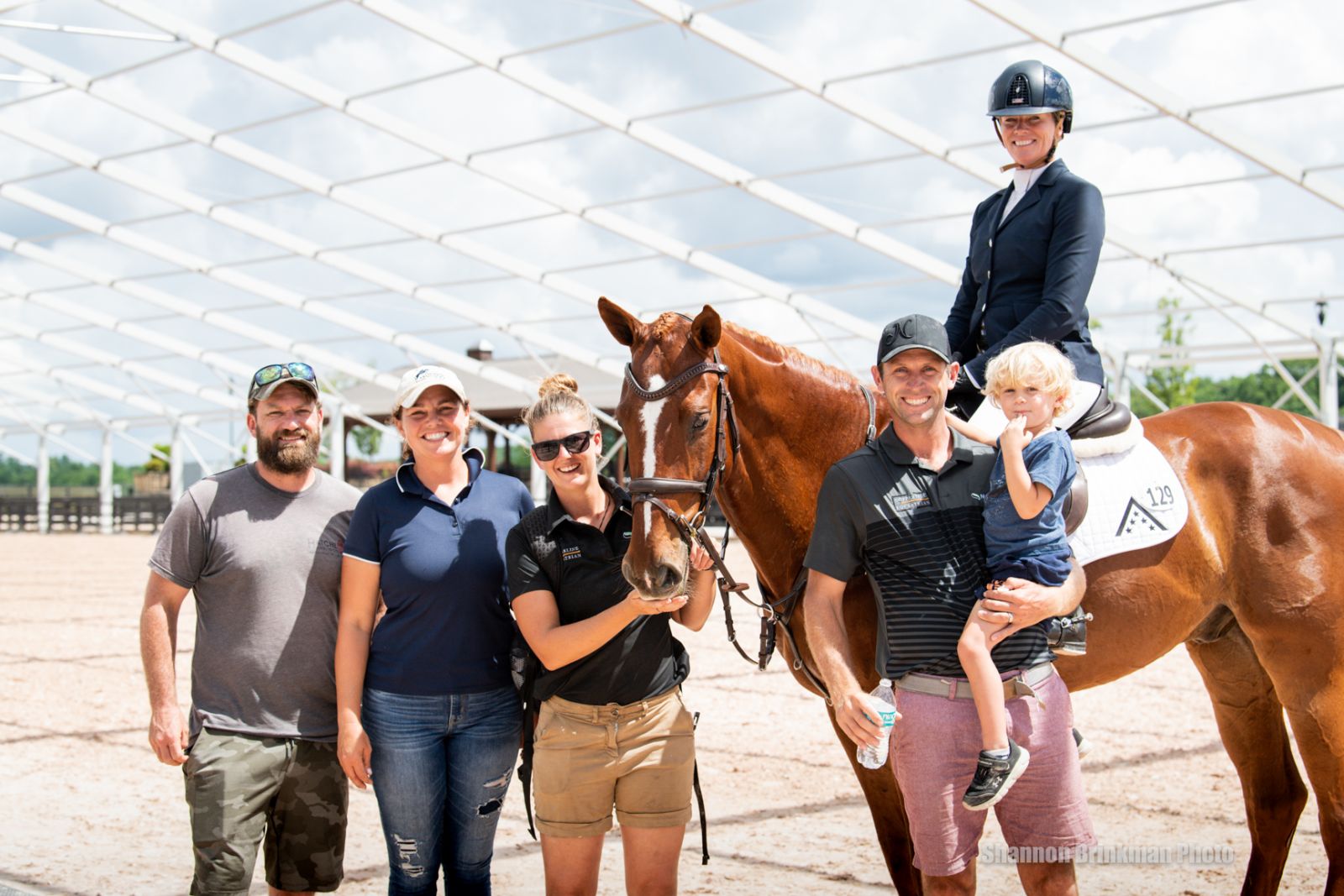 Leading the 1*-S is Sinead Maynard with her newest partner, I-Quid J, who was recently purchased out of Sharon White’s program. This is also Sinead’s first competition back post-second baby, Violet — welcome back! She and I-Quid added no show jumping penalties to their dressage mark of 27.3 to hold their lead ahead of cross country tomorrow.

It’ll be a busy day of cross country tomorrow, beginning with the 3*-S at 8:30 a.m. EST. The schedule is as follows:

The is no live stream of cross country tomorrow, but you will be able to tune in for Sunday’s show jumping here. We’ll be back tomorrow with more updates from North Carolina! Keep scrolling for a few more images from the always-wonderful Shannon Brinkman and team — you can click here to order your own photos from this weekend. 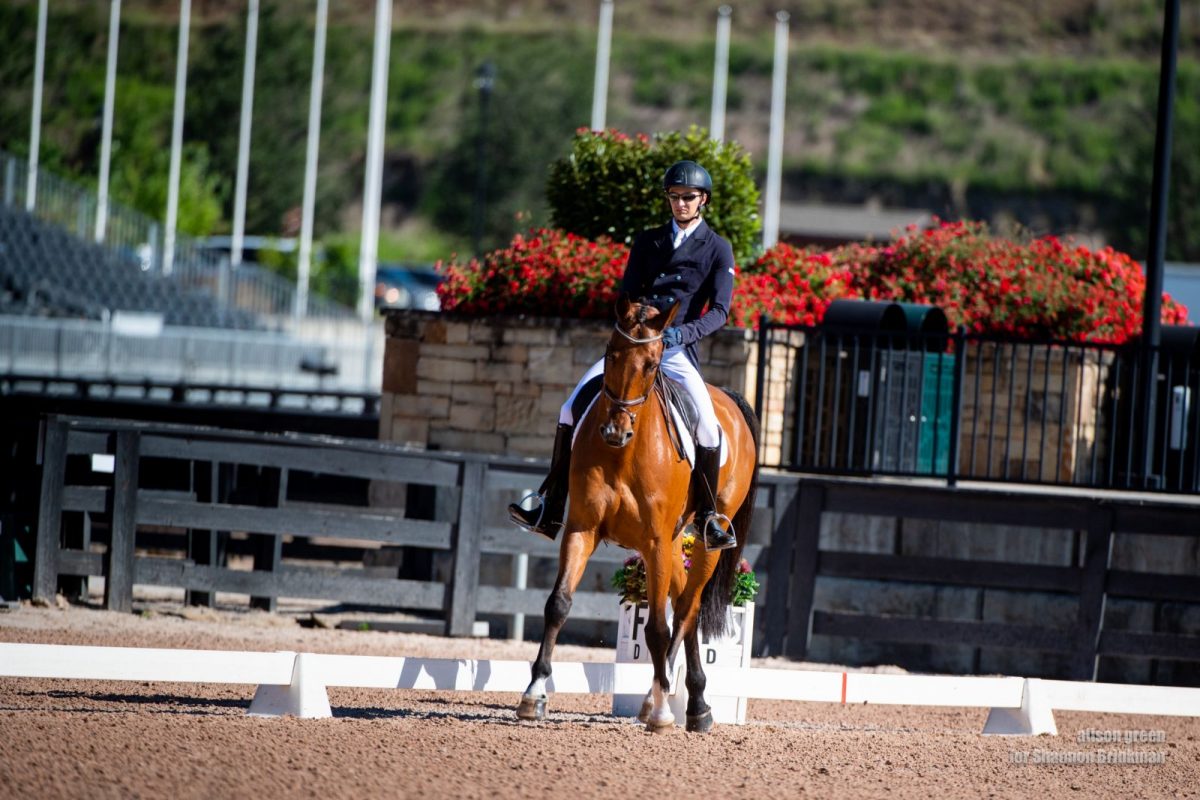 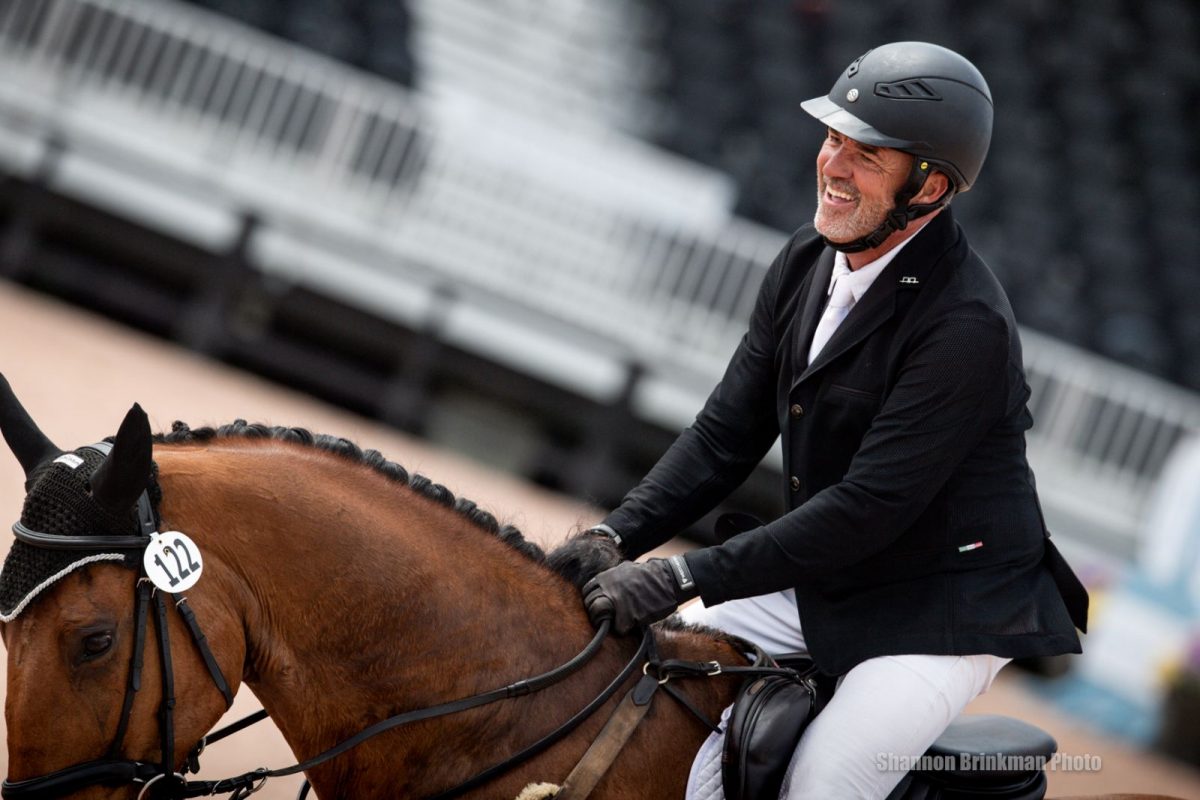 Jerry Barnette celebrates a clear round in the 1* with Fernhill Thirty. Photo by Shannon Brinkman Photography. 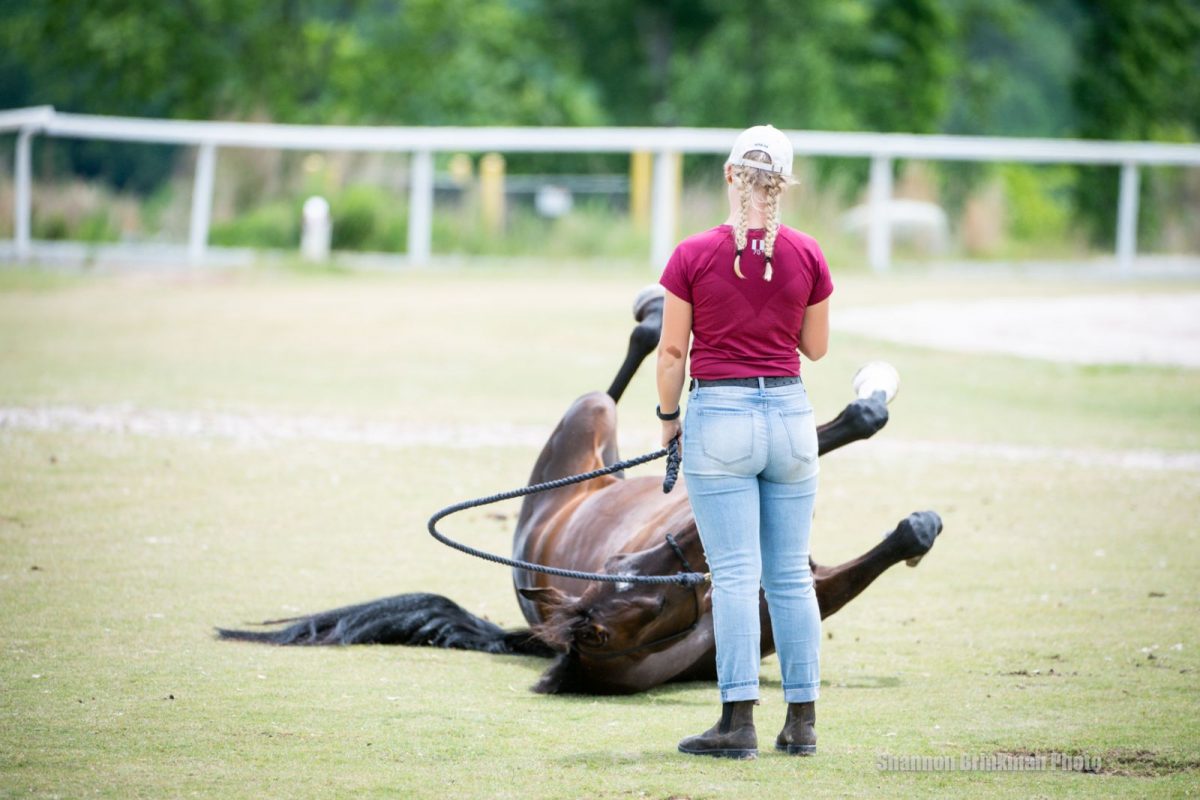 What good is a horse show without a good hand-grazing roll? Photo by Shannon Brinkman Photography. 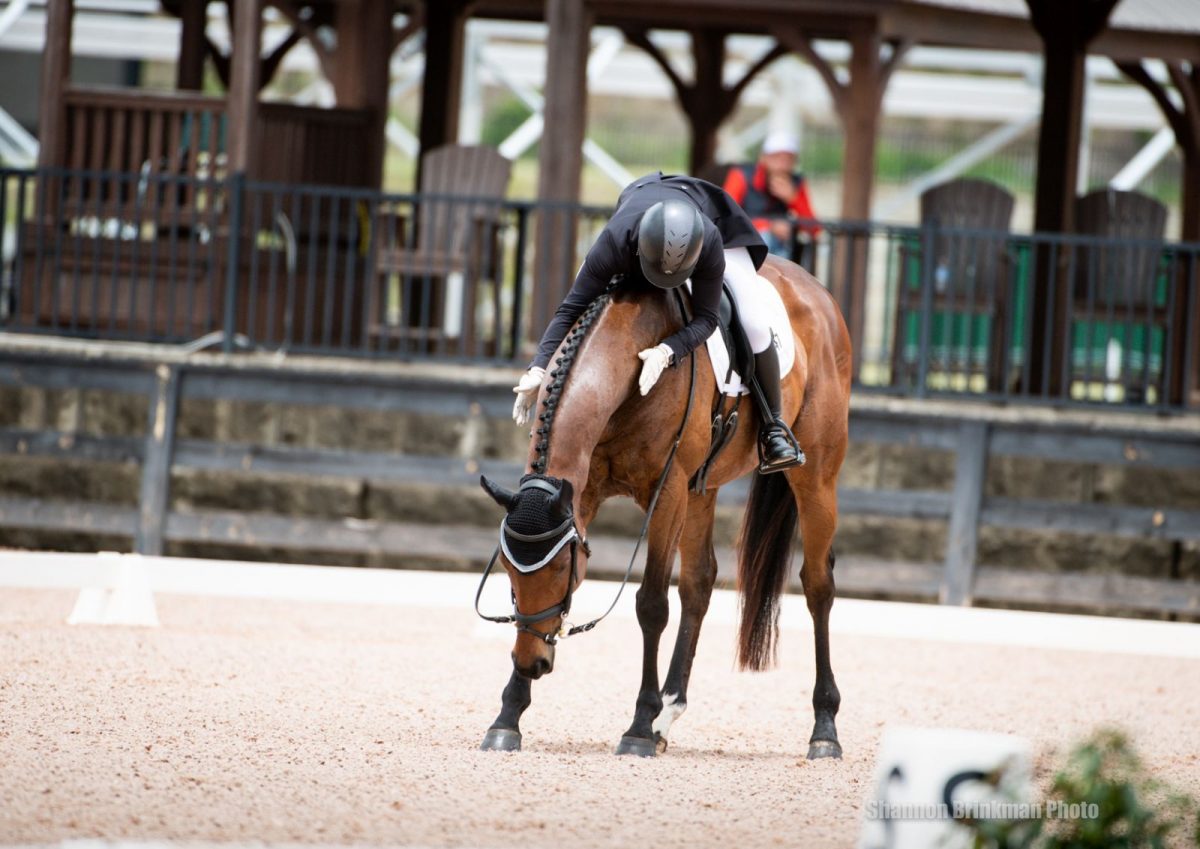 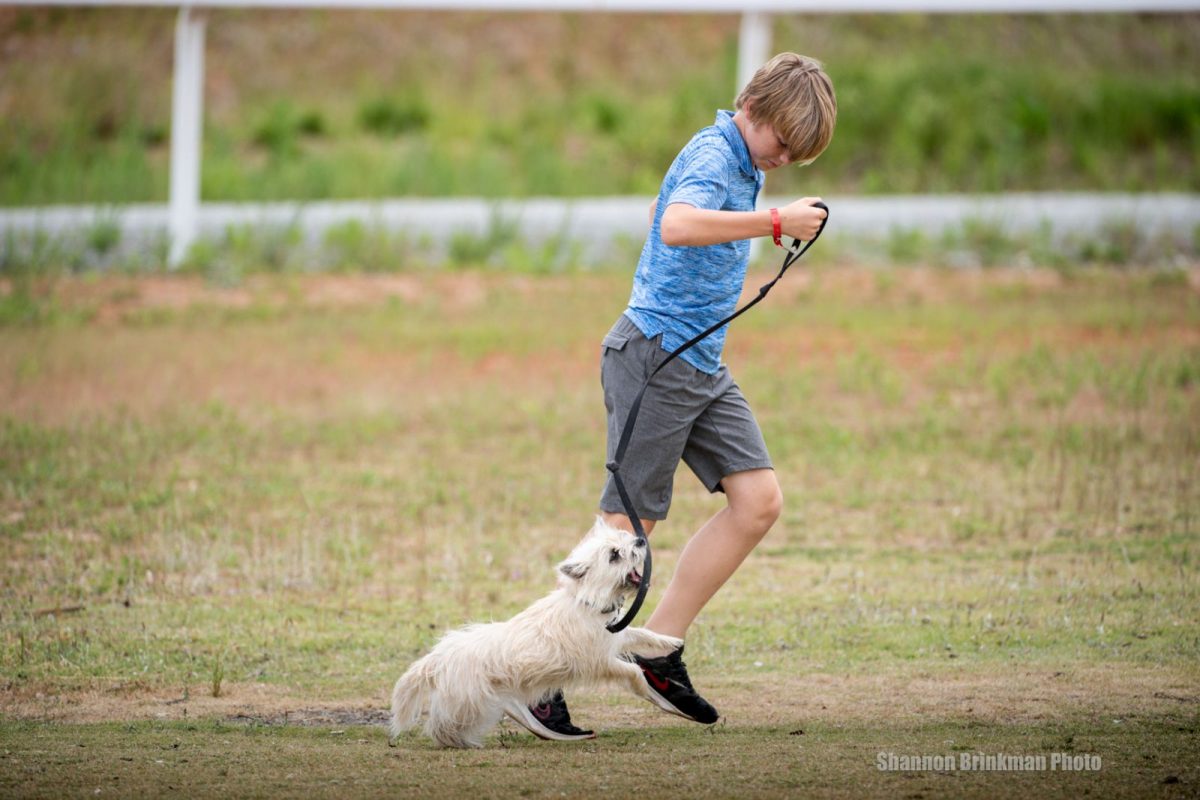 Horse shows are for the dogs…Photo by Shannon Brinkman Photography. 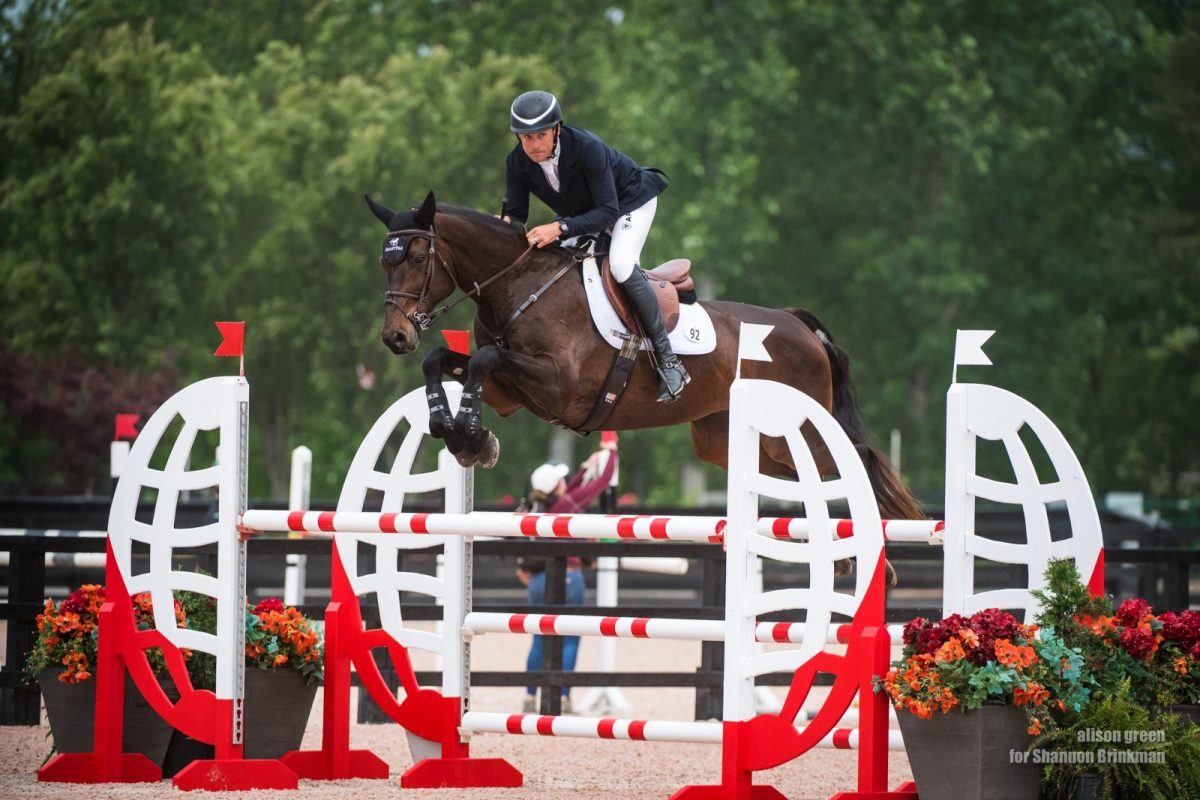 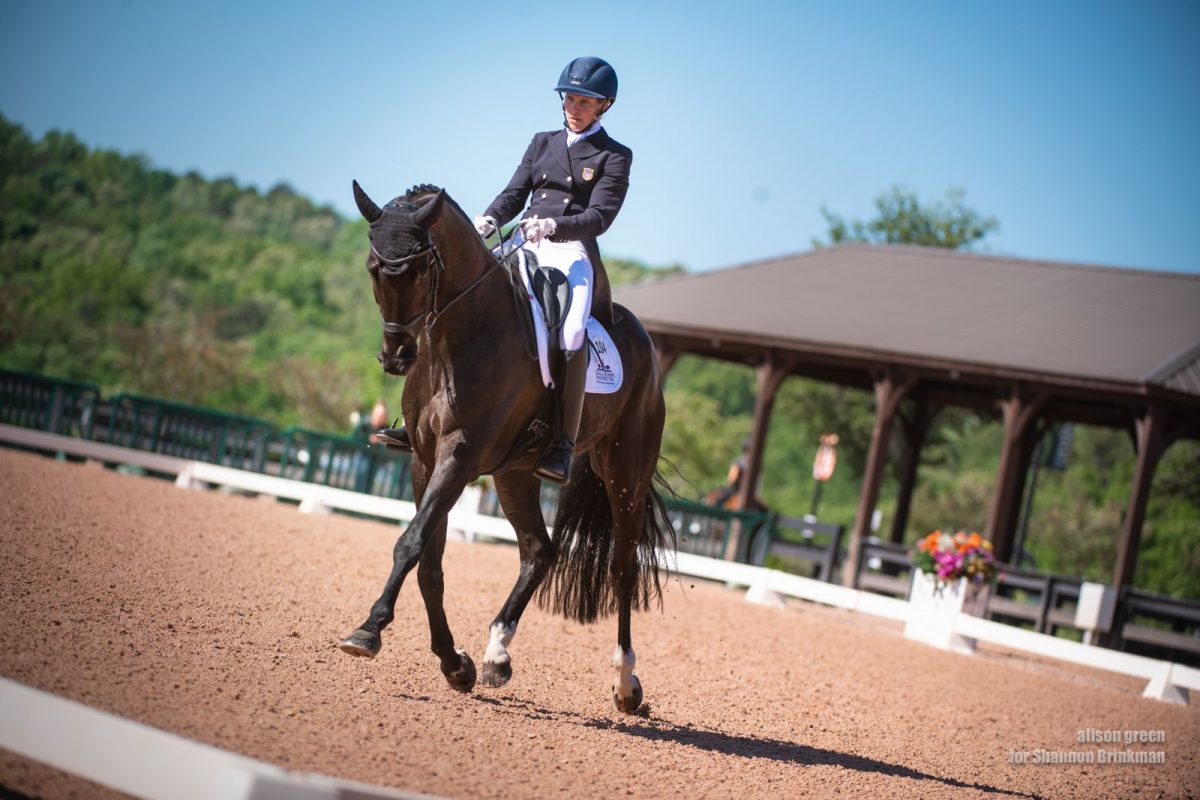 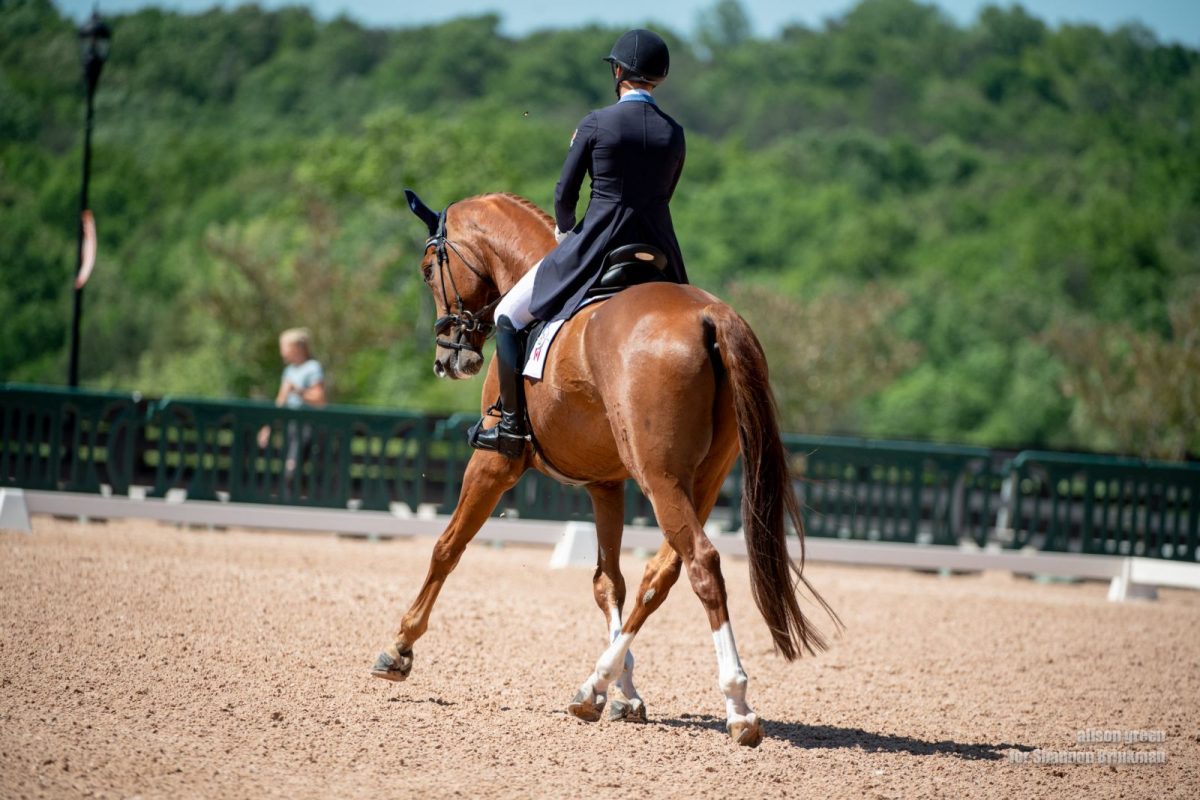 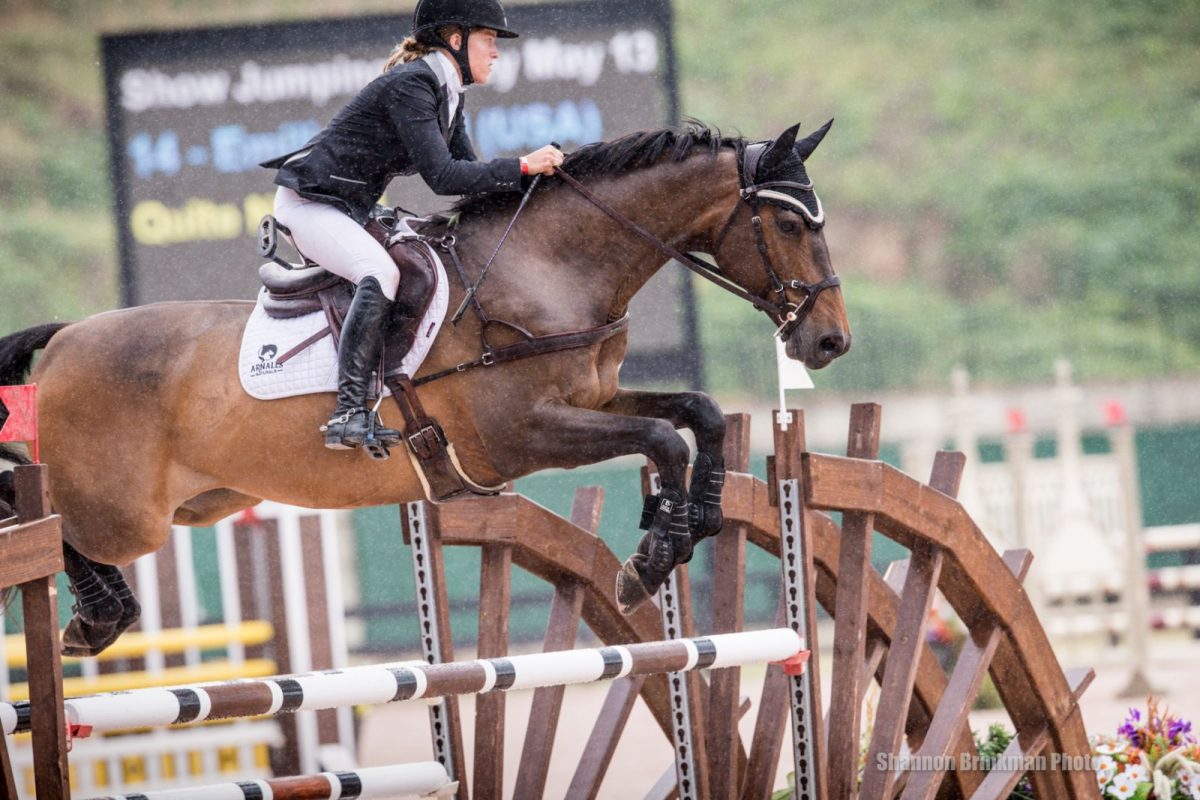 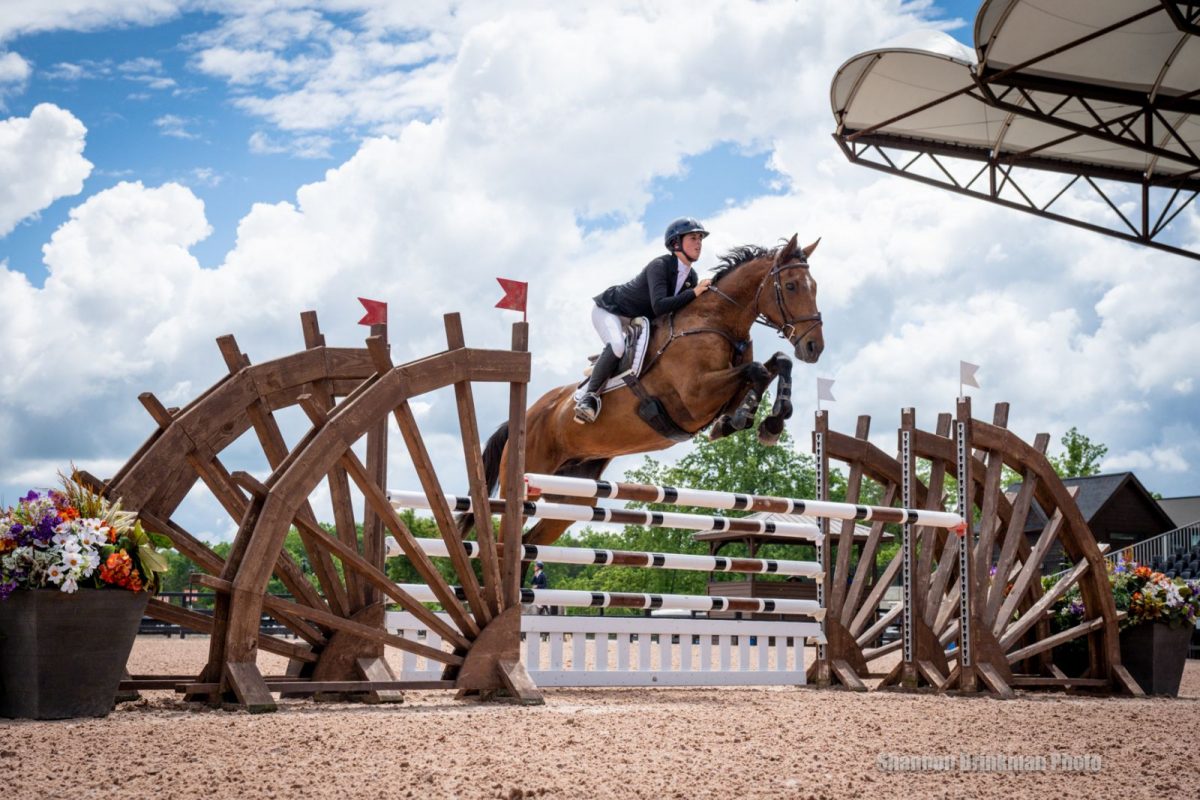 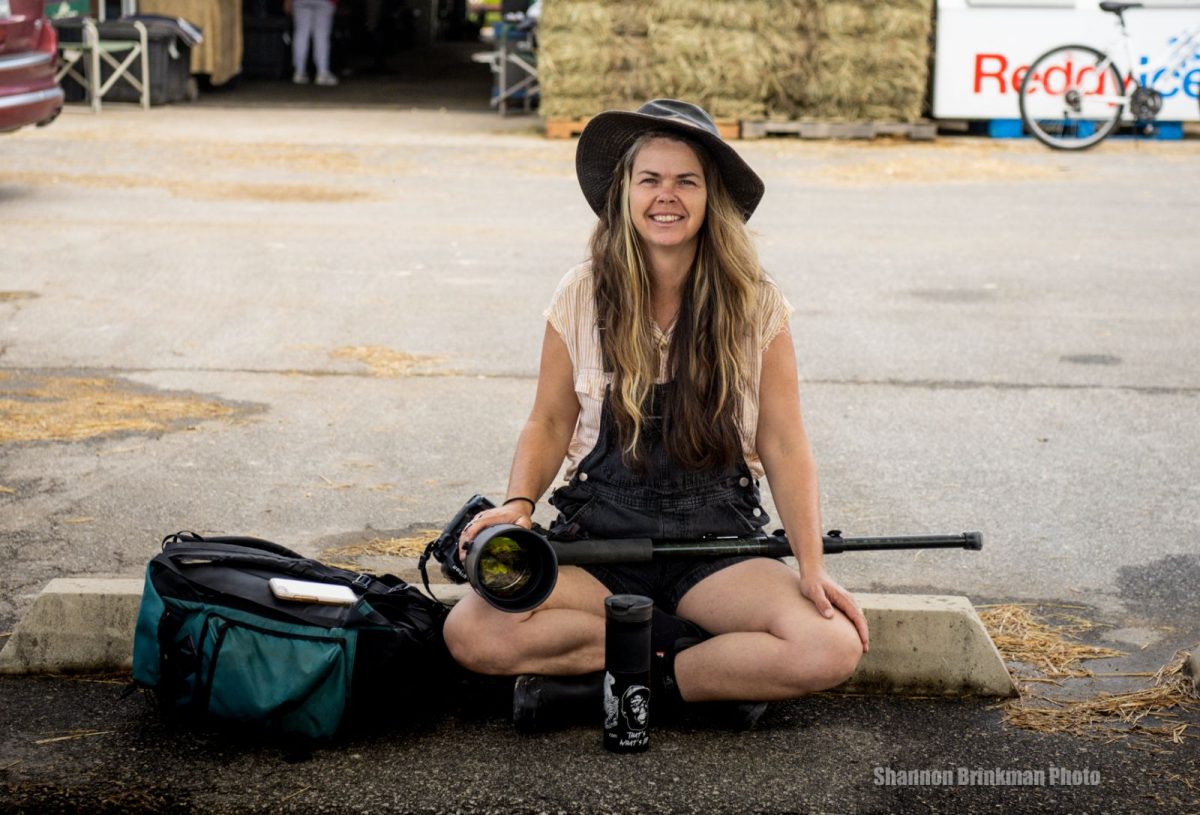 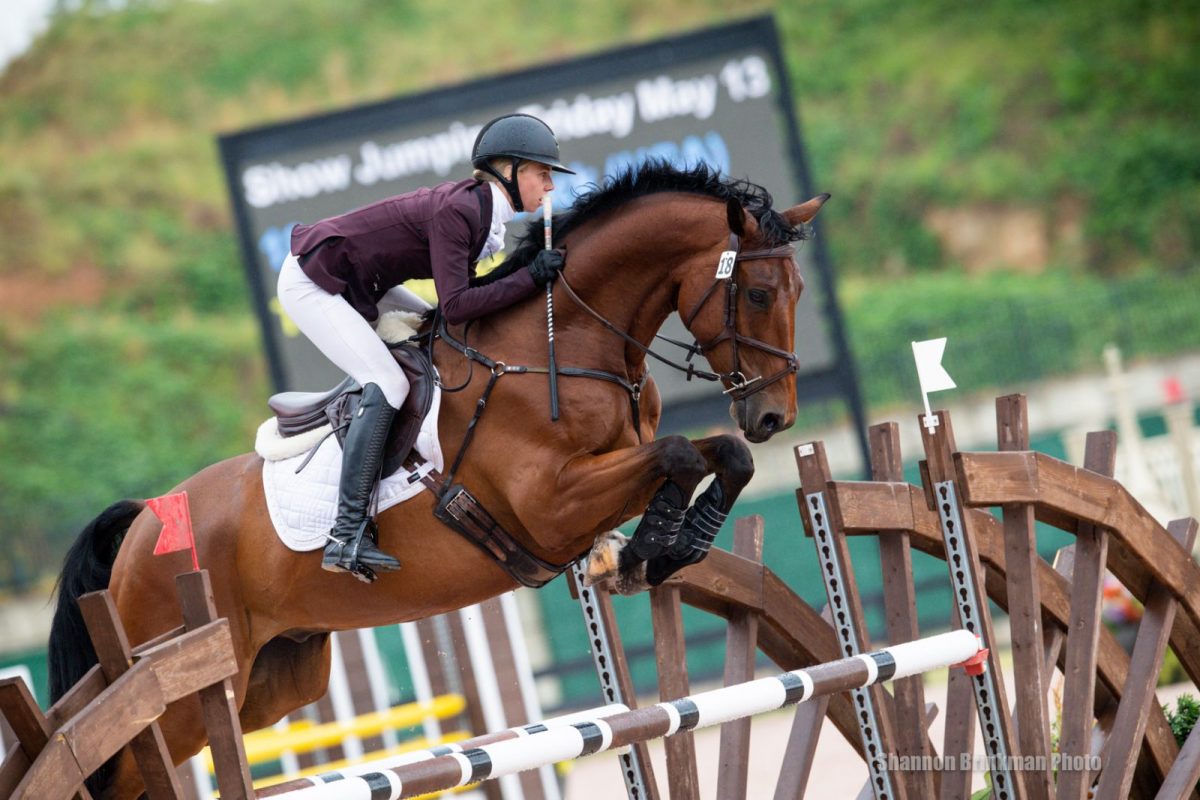 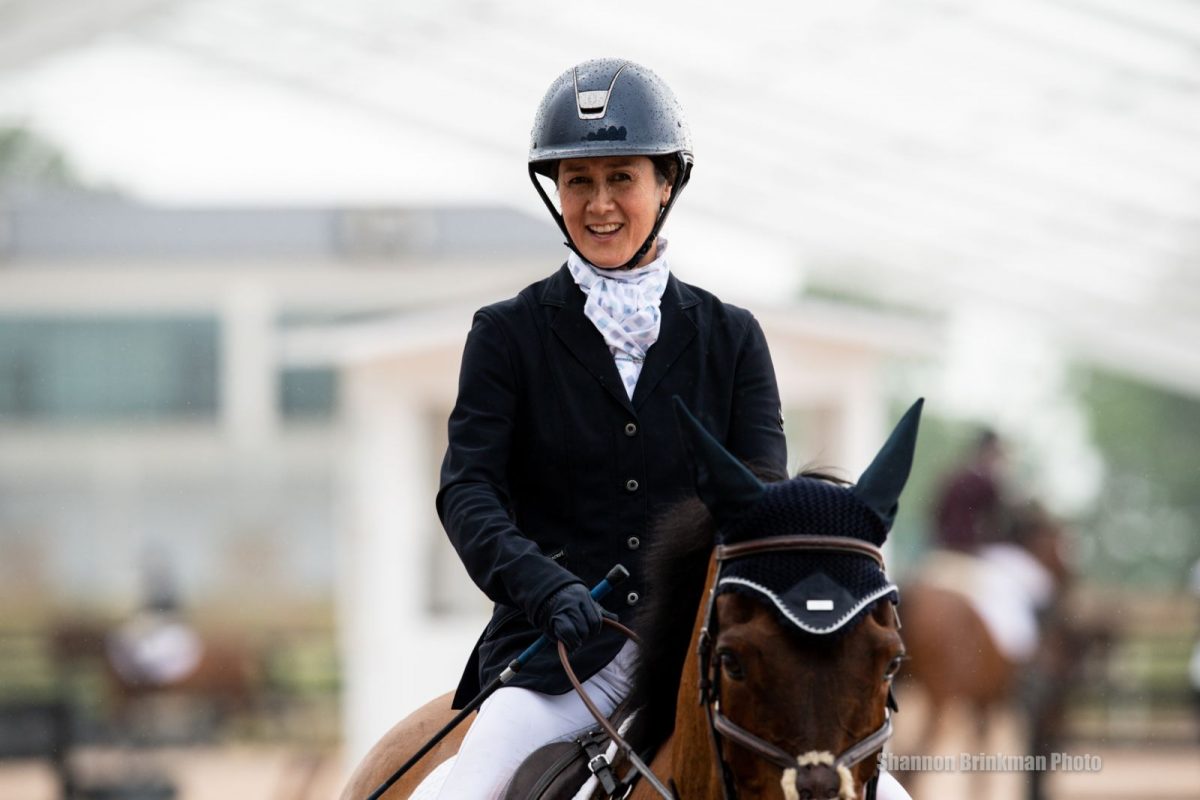 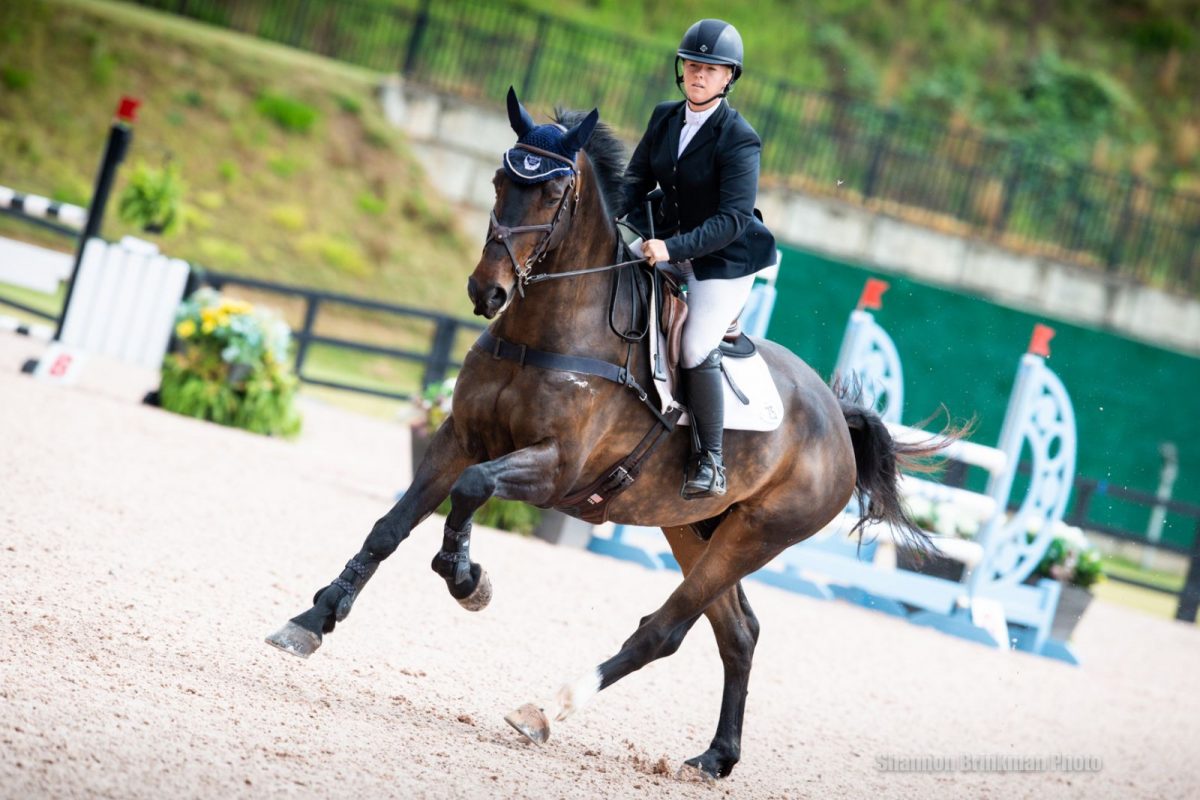