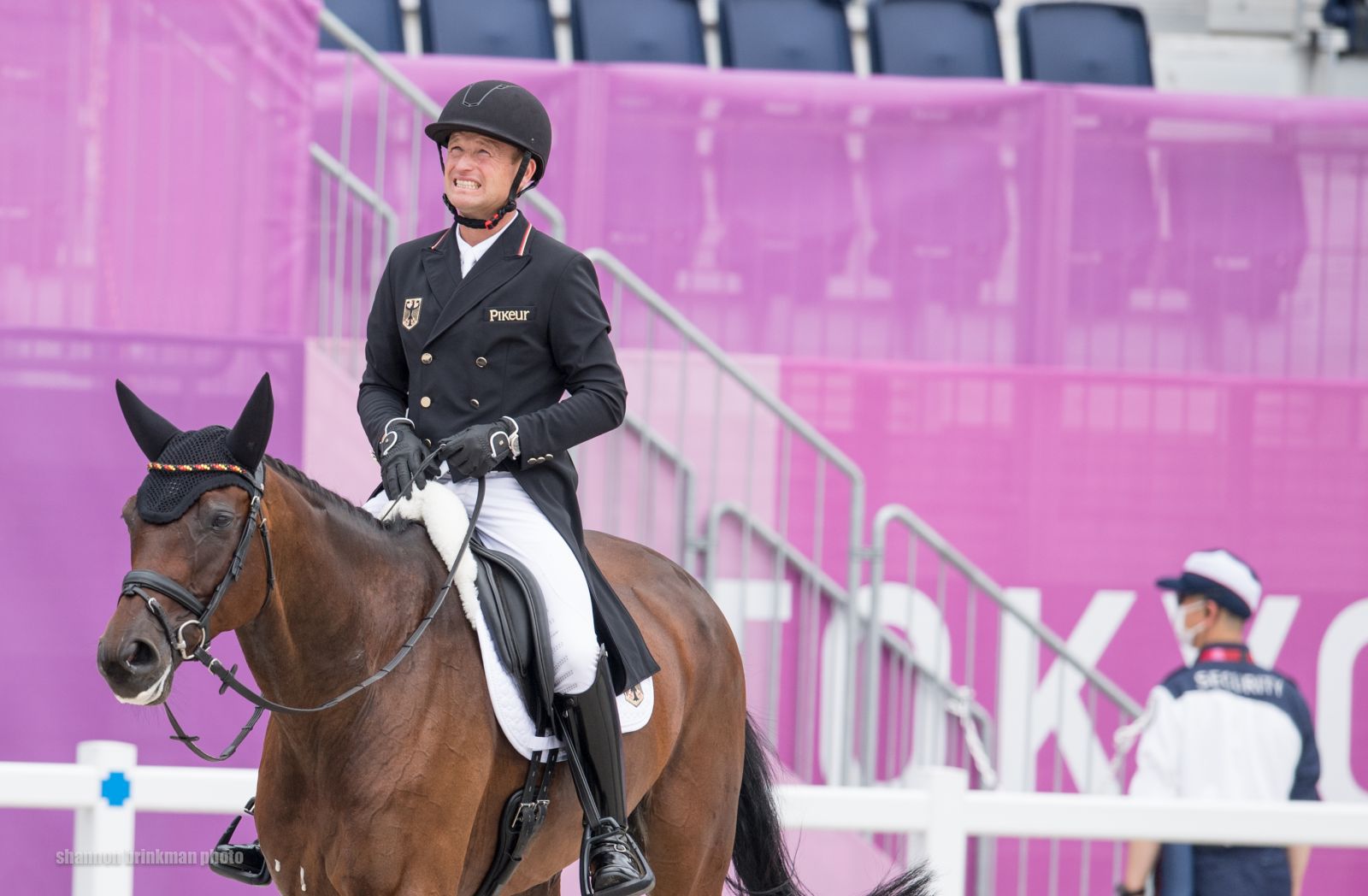 We’ve become accustomed to (spoiled by?) magnificent efforts by German anchor rider Michael Jung, but up until now we’ve been used to seeing him with his stalwart partners, La Biosthetique Sam and fischerRocana FST. Now, he comes forward for a first global championship – this pair finished second at the 2019 Europeans – with former Julia Krajewski ride Chipmunk FRH, a 13-year-old Hanoverian gelding (Contendro – Havanna, by Heraldik xx), owned by Deutsches Olympiade-Komitee für Reiterei e.V., Hilmer Meyer-Kulenkampff, and Klaus and Sabine Fisch, as his Olympic partner.

This is a horse he’s been building a partnership with since taking over the ride in 2019, and in a true exhibition of partnership, practice and patience, Michael and Chipmunk laid down a stunning 21.1 to win the eventing dressage and take hold of the lead going into tomorrow’s cross country test. This also helps solidify Germany’s spot in the team standings, moving them up into second position behind Great Britain on a score of 80.4.

Michael says the yearlong delay of the Olympics helped he and Chipmunk solidify their partnership. It’s easy to underestimate the amount of work that goes into taking a horse that’s been produced and competed by another rider and building a new relationship with it – and Michael’s shown us that this is something he excels at in addition to producing horses from the get-go.

“He was actually was much better because I had more time to train with him together,” Michael said of the postponement. “A long winter to work with him more together, much more competitions this year. Everything works much better this year than last year. So, for me it was perfect. It’s just work everyday together and get a good partnership.” 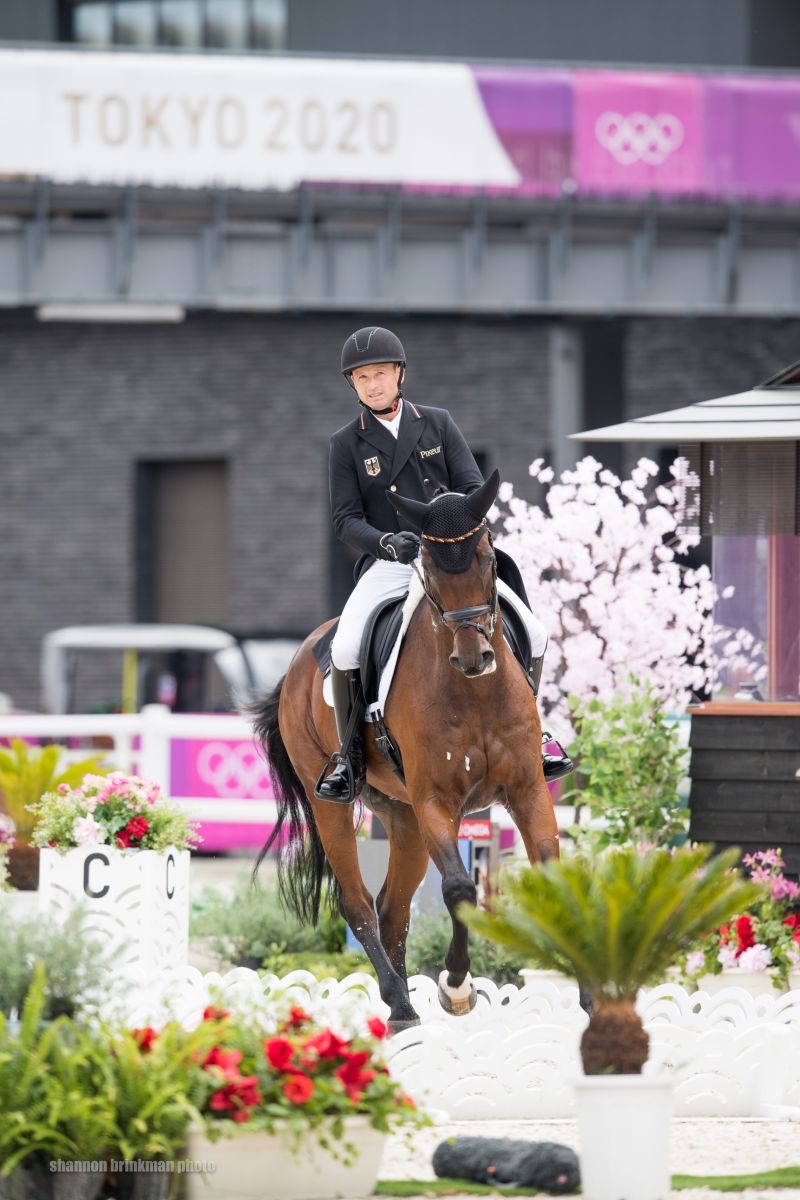 Despite another shutdown of competitions in mainland Europe earlier this year due to an outbreak of EHV-1, Michael says his preparations have gone relatively unchanged and that Chipmunk has shown himself to be a real professional as he’s stepped up to fill the very big horseshoes of his predecessors. He credited Julia for the work she did to produce the horse that she competed with at the 2018 FEI World Equestrian Games.

“Julia Krajewski rode the horse, bringing him up to the top sport and also the championships,” he explained. “So I have a horse that’s a new horse for me and I’m directly into the next championship, so I’m very happy and very thankful for this. It’s a great horse, a great horse with a lot of talent. He is very powerful, he’s strong in the cross country, and he’s also good jumper, so I’m very looking forward for the next.”

At just under four minutes long, the new shortened Olympic Games dressage test throws a lot at riders in quick succession, making it easy to get behind and very difficult to catch back up. Mistakes were costly, and the judges have — as is to be expected in the Olympics — been marking tough. But Michael’s test showed none of the rush or the difficulty, instead flowing effortlessly from movement to movement. Typically, this pair has averaged a 22.2 since beginning their partnership together, and today’s score also drops below Maggie Deatrick’s predicted score of 24.2.

As the final rider out for Germany, Michael says he plans to watch a bit of the track to see how some questions are riding, but for him it’s important to watch the right combinations. After all, he says, each horse is an individual, so watching a horse with a completely different way of going than his would be less than productive.

Michael is also the two-time defending Olympic individual gold medalist — he won individual gold aboard La Biosthetique Sam in London in 2012 as well as Rio in 2016 — but, always the focused pro, he says he only thinks about that “when I have nothing to do”. It’s also his 39th birthday today (coincidentally – or probably not, really – the same birthday as Harry Potter: yes, I went there, and no, I’m not sorry), and he says he’ll probably keep things quiet tonight and celebrate next week. Honestly, though, I can’t think of a much more appropriate way to have a birthday. 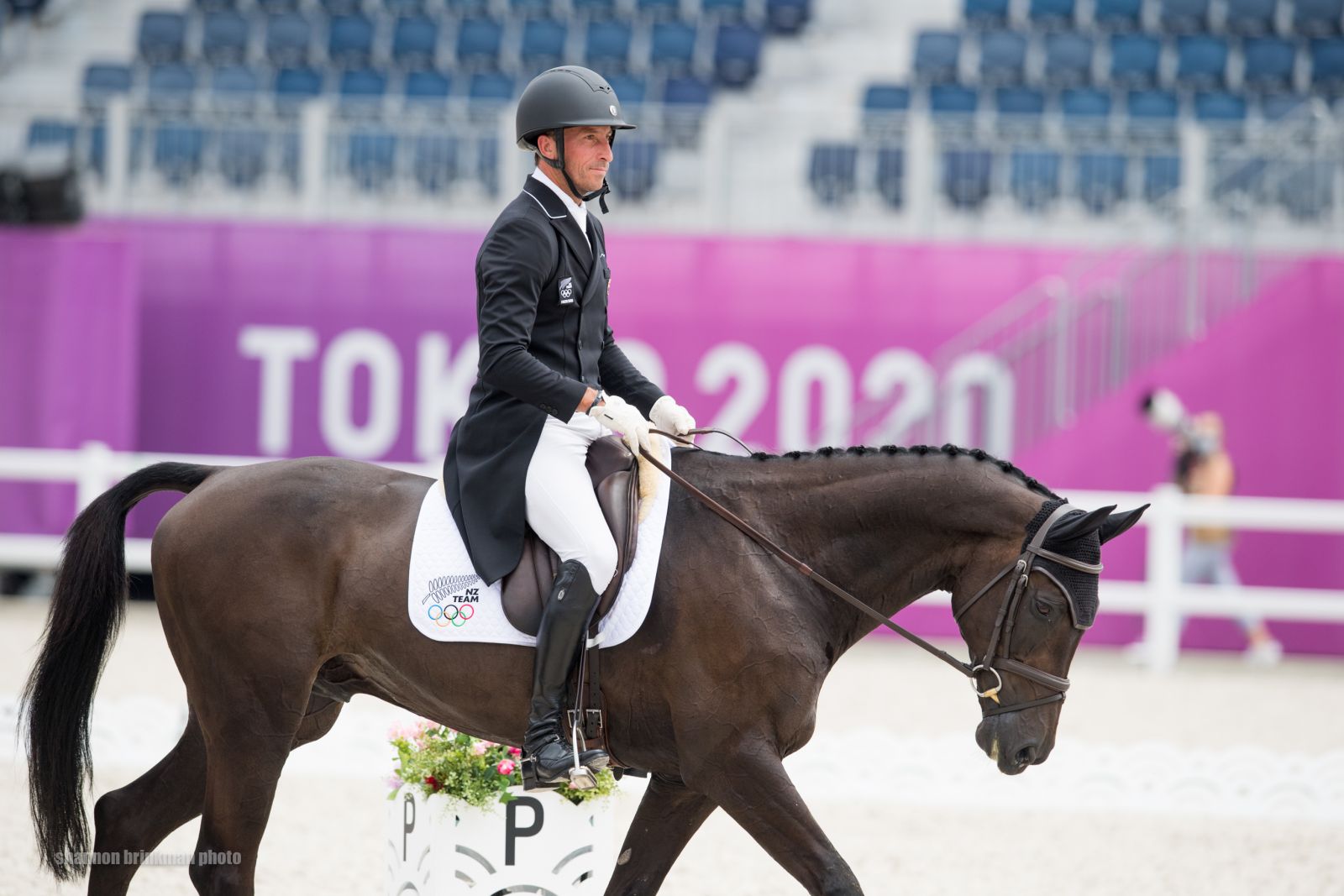 The top 10 remained mostly unchallenged today, but New Zealand anchor Tim Price did manage to squeak into the top five aboard Vitali (Contender – Noble Lady I, by Heraldik xx), an 11-year-old Holsteiner gelding owned by Joe and Alex Giannamore and Tim. Vitali, who was originally produced and piloted by fellow Kiwi James Avery, was actually not Tim’s first pick for the Games — he originally intended to ride the more experienced Wesko, but sadly the 18-year-old gelding sustained a minor injury in the lead-up to this week and was subsequently retired from competition. Now, the torch falls to the younger Vitali, who had a few green moments in his test but mostly stepped up to the plate for his first championship.

“It was a little bit of a glimpse of what he’s capable of,” Tim said of Vitali’s 25.6 mark that put them into fifth place. “I think as an established Advanced horse in the future, he’s going to be pretty special in the dressage department. (He) just showed a little bit of his age and stage with a couple of little moments, but he’s a real trier. He kept coming back to me and I think he executed pretty well.”

Tim only just took the ride over last fall, meaning it was a whirlwind of preparation to form a partnership and get to the Games. “He’s had to do everything right and he’s 95% done that along his journey from October last year when I first sat on him to now,” he continued. “Otherwise he wouldn’t be here, so I’m very confident in him. But there’s a short time in terms of partnership because that’s one of the key things that’s on display at the Olympics, isn’t it? The partnership between horse and rider and what they can do and how they can rely on each other. So, like I say, I’m very confident with him with it. He’s a very genuine guy and he’s been with me the whole time so I feel very comfortable on him.” 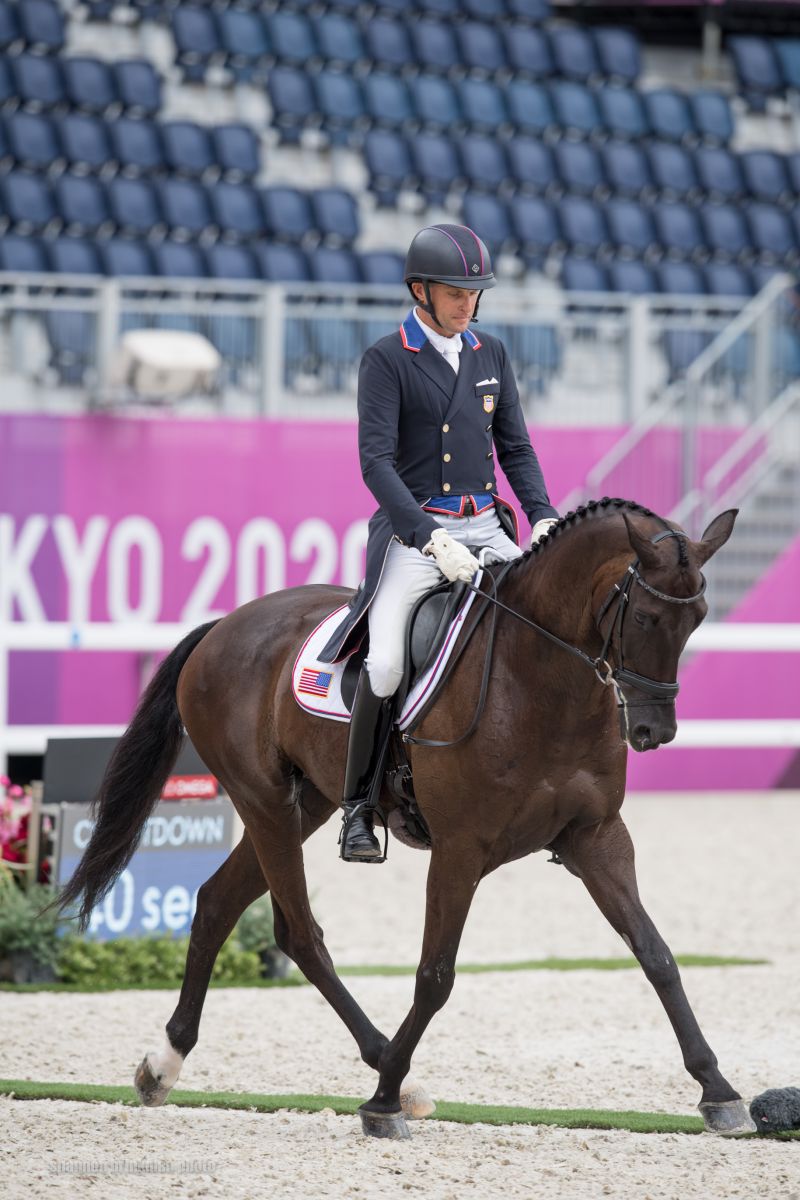 It was not the test that final U.S. rider Boyd Martin wanted to put in aboard Christine, Thomas and Tommie Turner’s Tsetserleg TSF (Windfall II – Thabana, by Buddenbrock), as some mistakes in the transition out of the rein-back as well as the flying changes held this pair’s score back from being as competitive as they’re capable of. Boyd and ‘Thomas’ earned a 31.1 to sit in 20th place after the dressage, putting Team USA on a collective score of 94.6. The team does, however, move up one spot into eighth place in the team standings, 16.3 penalties out of gold position and 8.2 points off the podium.

“You know, to be honest, it’s quite disappointing,” Boyd said after his ride. “Thomas has been so, so good in the dressage for years and years and we had great work in there. Then there was one moment in the rein-back where he fell behind me and misunderstood me and cantered out which then screwed up the next movement. And the outside he had a spook at a cameraman, so…I mean, it was some great moments and then some disastrous moments.”

We know this competition will certainly not be a dressage competition, and Boyd’s looking ahead to the task to come. In truth, delivering three fast and clear (or, depending on how this tight optimum time shakes out, just clear) cross-country rounds could rocket a team up the board. “You sort of come here hoping to give a personal best and the cross-country is so difficult tomorrow and it’s so hard to get the time, I believe,” Boyd continued. “You know, I think we’re in with a chance if we can deliver three good rounds across country and we’ve got three good seasoned horses that are older and experienced so I think we’ve got nothing to lose by going out there and giving it a crack.” 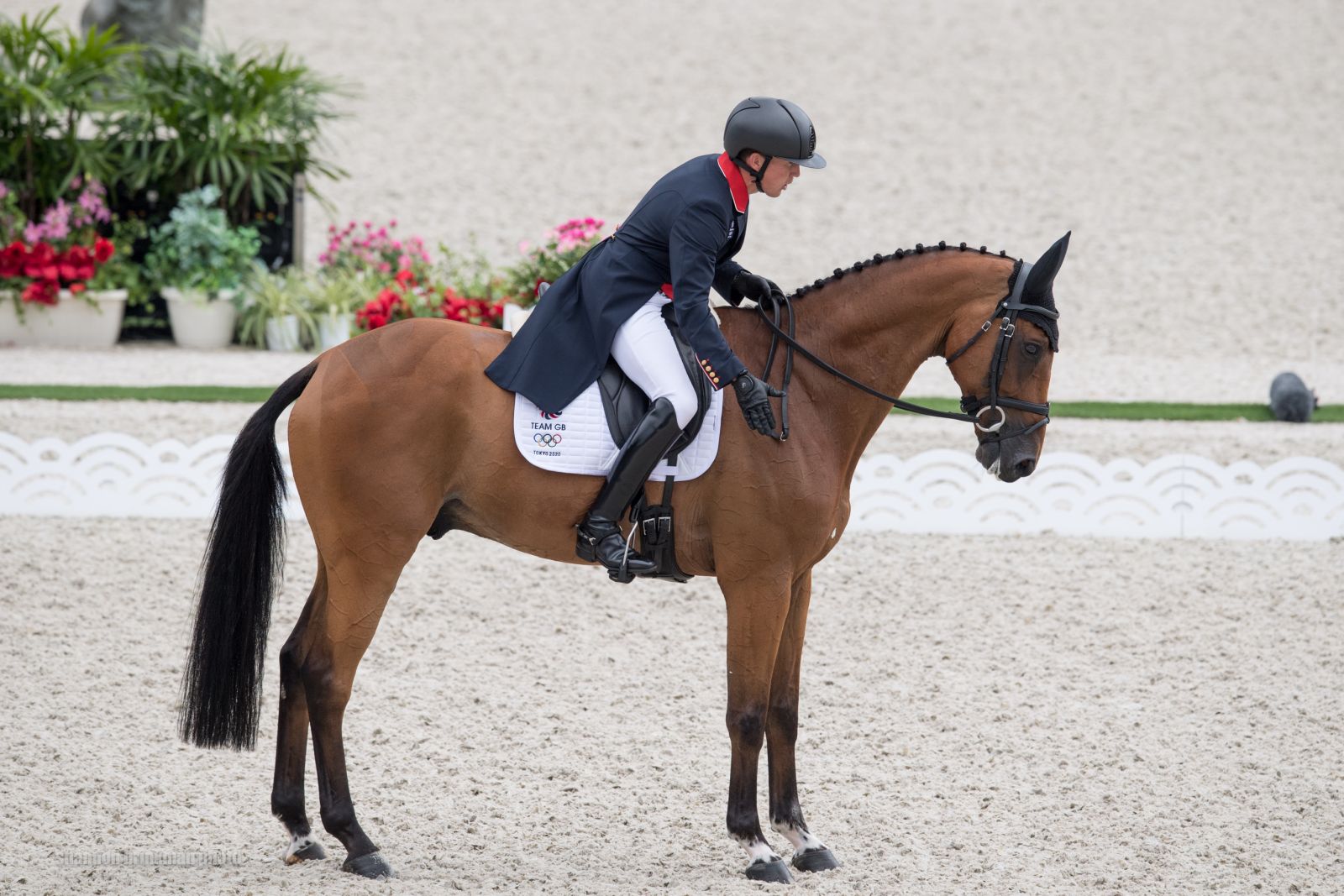 The last rider to go for Great Britain, who will remain in gold medal position overnight as a team on a cumulative score of 78.3, was Tom McEwen with Toledo de Kerser (Diamant de Semilly – Ariane du Prieure II, by Papillon Rouge), a 14-year-old Selle Français gelding owned by Fred and Penny Barker, Jane Inns, and Ali McEwen. Tom was pleased with Toledo de Kerser’s efforts, but like many before him found his score to be a bit higher than what he’d expected; this pair will take a 28.9 and individual 12th place into tomorrow’s cross country.

“I’m actually very pleased. Well, very pleased with him in general,” Tom said. “He coped really well in there. He loves situations like that. Just the two early changes really cost me and then getting back from there. For me, I didn’t see the marks, but I was actually delighted with his walk today, thought he’d walked really well – but we’re still, as a team, in a strong position.”

As it stands now, it will be Great Britain (78.3), Germany (80.4) and New Zealand (86.4) in medal positions. A total of 37.1 penalties separate the 15th-placed nation (Italy) and the leaders, so it’s truly still anyone’s game – and with the buzz surrounding Derek di Grazia’s Sea Forest Cross Country course, well, let’s just say it’s time to hang on to your hats as I think we’re in for some big shake-ups come tomorrow.

There have been two withdrawals today: Austria’s Katrin Khoddam-Hazrati withdrew before dressage after losing a shoe before competition and Belgium’s Lara de Liedekerke-Meier has also withdrawn today after a minor injury sustained to her horse.

We’ll have a cross country course reaction round-up from the riders still to come as well as more stories from the mixed zone today. I have to say, this shortened dressage test has made this first phase absolutely fly by – and I think I like it! I asked several riders for their thoughts on both the new test and the new format, and generally speaking the consensus has been positive for the new test, but most riders would prefer to have four on a team with a drop score or at least to have the alternates allowed to compete as individuals. It will certainly be interesting to see how this new format shakes out over the coming two phases.

Stay tuned for much, much more to come from Tokyo – we are only just getting started! Go eventing. 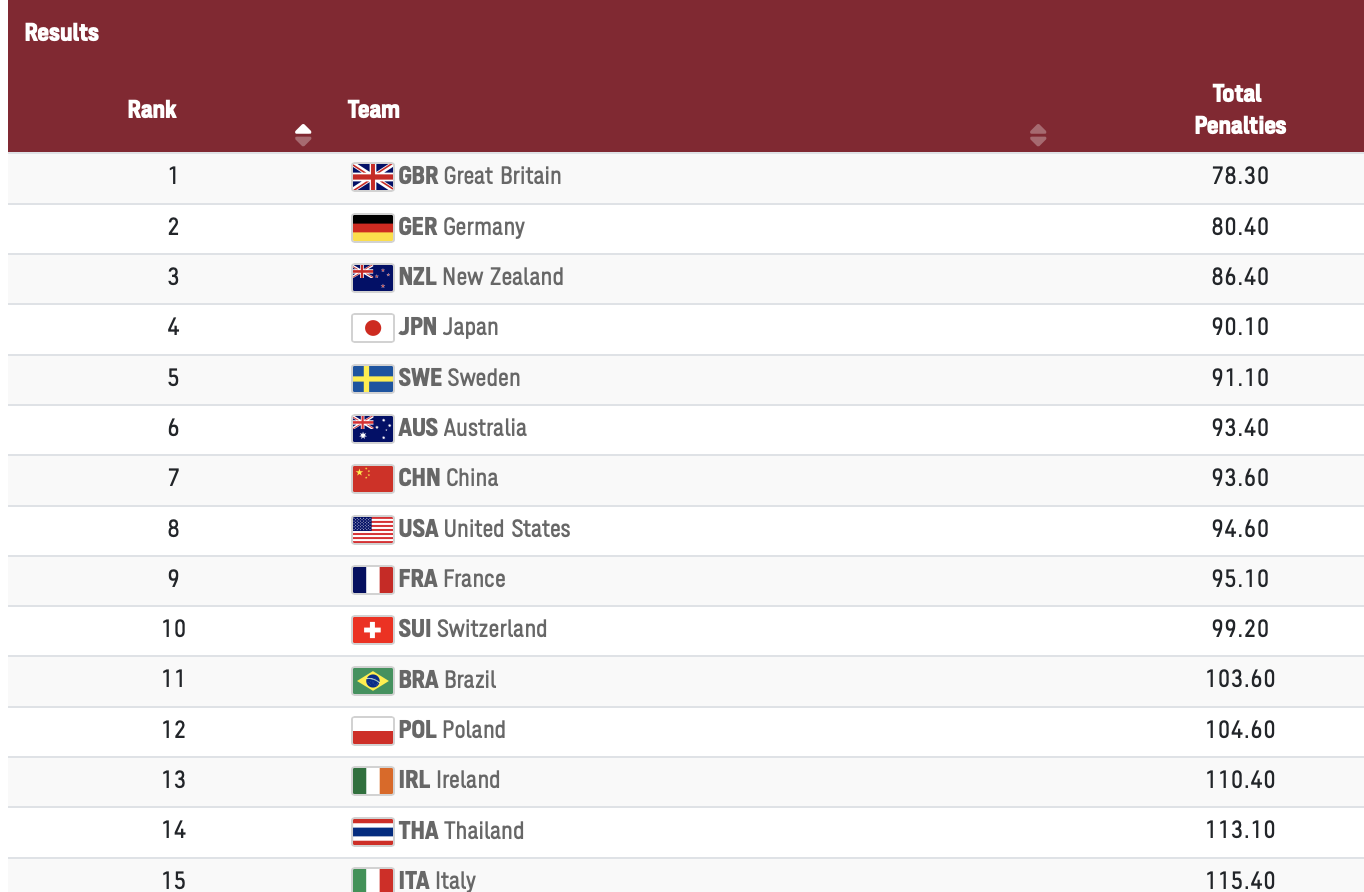 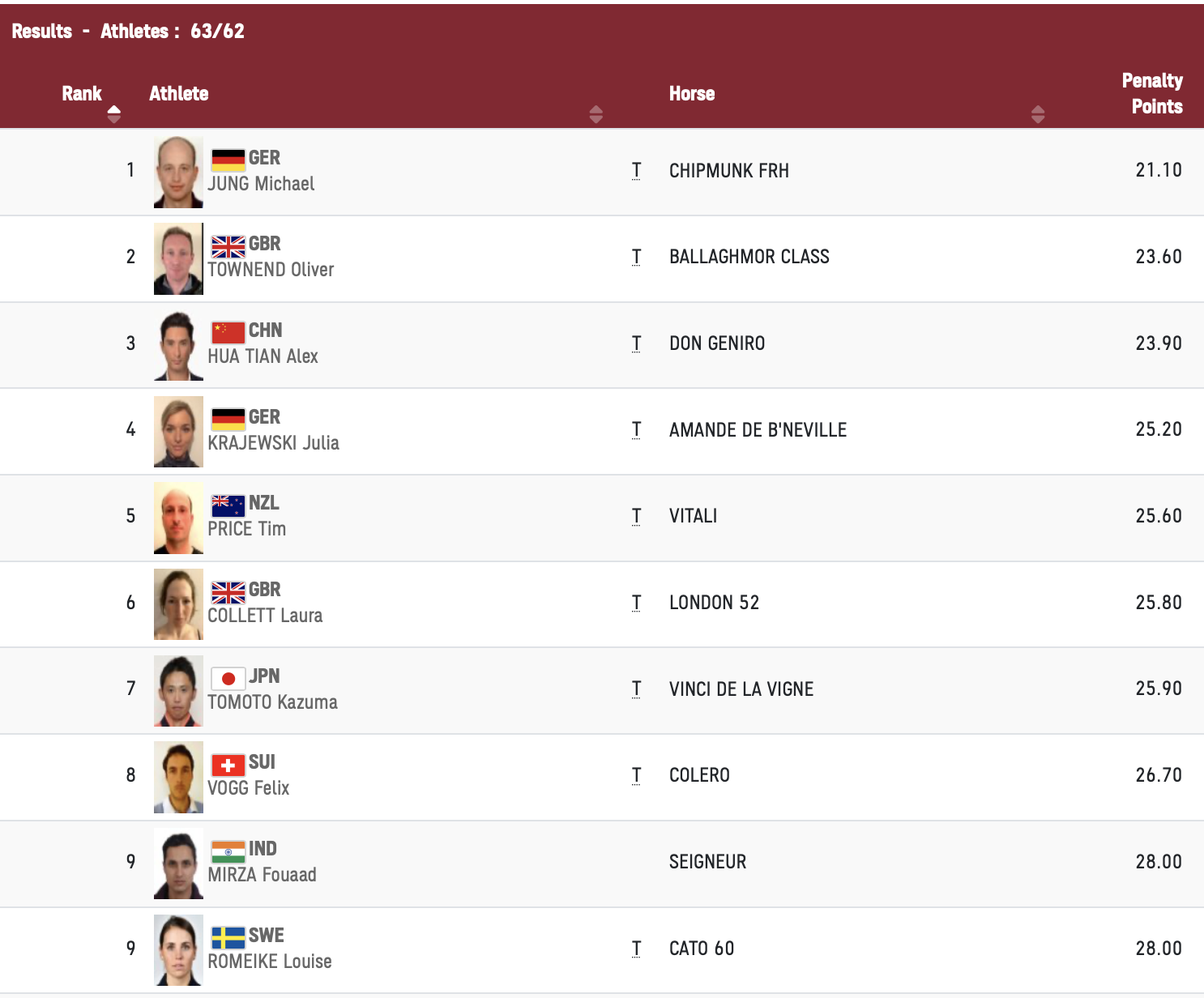