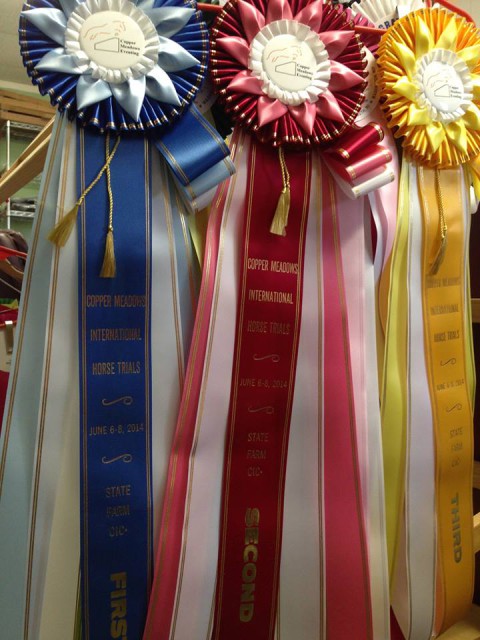 Copper Meadows, in Ramona, Ca., is hosting their spring event with their first time holding FEI divisions this weekend. The event has proven to be quite a success with a good amount of entries across the board.

In the Western Underground CIC2*, Autumn Schweiss and Oakport Strauss hold a sizable lead over the rest of the field. After scoring a 53.5 in the dressage, Autumn turned in the only double clear show jumping round on a tough course to move into a 10.4 point lead over Tamra Smith and the talented Twizted Syster.

Autumn and Oakport Strauss will be looking for some redemption on cross country tomorrow after a fall at Chatt Hills last month, but this pair has had much success at this level since moving up this year. They have not finished out of the top 6 at the Intermediate and CIC2* level so far.

Twizted Syster is also relatively new to this level, moving up to Intermediate this year after a highly successful Preliminary campaign with Tamie. Tamie often posts on her Facebook about this Irish Sport Horse Mare and how thrilled she is to have the ride on her, so Tamie is surely riding high and raring to get out on cross country tomorrow.

Rounding out the top three in the CIC2* are Cori Davis and A Golden Effort. This pair has a bit more mileage at the Intermediate level than the top two horses, but this will be their best placing to date if they can hold on to their top three position after cross country.

In the State Farm CIC*, Tamie Smith has the lead after show jumping with Rita’s Bright Spark. The Swedish Warmblood gelding is consistently competitive on the flat, and Tamie will be looking for a clean and educational run on cross country tomorrow at the horse’s second CIC*.

Whitney Tucker and Chavez Ravine turned in a double clear show jump round to move from fourth to 2nd in the horse’s CIC* debut. Frederic Bouland and King Louis round out the top three, also jumping double clear to remain in third place overnight.

Our friends at Ride On Video have teamed up with Frankie Theriot of Athletux again to bring us highlights from Copper Meadows:

In Texas at the Texas Rose HT, Bonner Carpenter and Basco have the lead in the Open Intermediate on an impressive 29.9. I was able to see Bonner and Basco clinch the Intermediate win at the 2013 AEC, and this is definitely a pair that will steal your heart. Angela Grzywinski and Novelle are in second going into cross country on a 30.4, and Bailey Moran and Loughnatousa Caislean moved up from fifth after dressage to third overnight.

At Plantation Field, Kelly Prather and Flagmount’s Nightcap won the Intermediate division after leading from the start. They added just a few time penalties to finish on a 32.5. This Irish Sport Horse gelding collects his second Intermediate win and is proving to be a solid citizen for Kelly, who first began competing him at Training level in 2013 after taking over the ride.

Justine Dutton and Jollybo picked up second place after a quick cross country round, moving up from seventh in the British Sport Horse mare’s Intermediate debut. Boyd Martin, who plans to depart for Germany tonight, was good for third place aboard Crackerjack. Boyd told me earlier this week that he was going to try to reduce the amount of horses he rode this weekend to save his leg for Luhmühlen, but he still piloted five horses around the Intermediate course today. He will now be off to bubble wrap that leg as he gets on the way to Germany.

River Glen also has an Intermediate division running this weekend, and Matthew Ulmer with Palmetto Conair are in the lead going into show jumping. This is Palmetto Conair’s Intermediate debut, and so far he is proving to be rather unimpressed with the step up. Tied for second after show jumping are Susannah Lansdale and Buck Naked (best horse name ever?) along with Alexa Eleanor Ehlers and In Any Event, who sit on a 46.1 to give Matthew and Palmetto Conair a bit of breathing room.

I must also give some love to my hometown event, Queeny Park, which is running their annual horse trials this weekend. St. Louis doesn’t have much in the way of event venues (well, Queeny Park is really all there is), but if you’re going to have limited options Queeny Park is a great place to have access to. They are running a Preliminary/Training division this weekend, where Jennifer Robertson and Knowtorious Son have the lead after cross country on a 35.0.

Jennifer’s taken a bit of time off from eventing to focus on having her first son and spending time in the jumper ring, but she hasn’t seemed to miss a beat so far this weekend. Jana Lyle and Tupelo sit in second after Jana said she took her foot off the gas a bit early on cross country. Danielle Tursky and Park Avenue picked up 60 and some time on cross country and sit in third, and Rachel Childers and Bar Harbor are in fourth going into show jumping tomorrow.

Because we can’t say it enough, I must once again say thank you to everyone who makes these busy weekends possible. I feel like a broken record each weekend when I am wrapping up scores for the day, but I also feel that you can’t say thank you enough. To all of you hardworking individuals who are tirelessly toiling to ensure the events are running smoothly and everyone is safe, we say thank you with utmost sincerity!