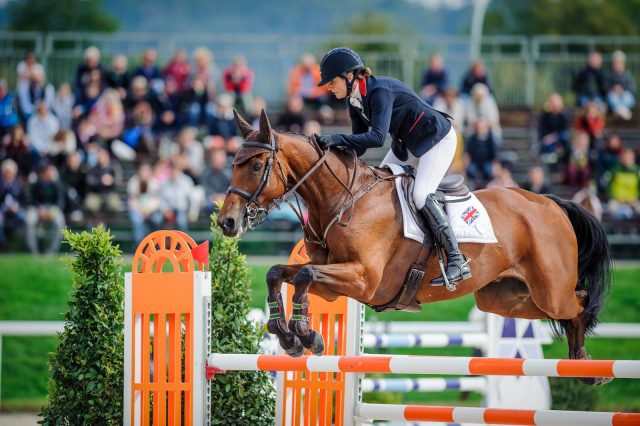 In arguably the most significant shift to the entry list so far, reigning Badminton champion Piggy March has withdrawn John and Chloe Perry and Alison Swinburn’s  Brookfield Inocent from contention. The thirteen-year-old Irish Sport horse gelding (Inocent 3 x Shalies Pet, by Kings Servant) won the CCI4*-S Grantham Cup at Thoresby Park in the lead-up to Badminton, and the European reserve champions were widely regarded as among the frontrunners to take this year’s title, particularly after a strong five-star debut at Pau in 2020 saw the horse take an easy second place. They’re replaced by France’s Ugo Provasi and Shadd’OC, who will both make their Badminton debut next week. This will be Ugo’s second-ever appearance at the level and his first in a decade: he finished in the top twenty at Pau in 2012.

We’re now down to number 13 on what has been an uncharacteristically slow-moving waitlist — in previous years, we’ve seen no fewer than 14 horses and riders accepted from the list, which is set in order of FEI points accumulated by the combination over a rolling period. When we last checked in, Sweden’s Sofia Sjöborg and DHI Mighty Dwight had stepped into the gap left by Zara Tindall and Class Affair; since then, a further six horses and riders have made the cut, including Ugo and Shadd’OC. Those combinations are Great Britain’s Nicky Hill and MGH Bingo Boy, Ireland’s Esib Power and Soladoun, the USA’s Emily Hamel and Corvett, Great Britain’s Izzy Taylor and Artful Trinity, and France’s Arthur Duffort and Toronto d’Aurois. The horses and riders who have withdrawn from the entry list since our previous update are Harry Meade and Tenareze, Oliver Townend with two-time Kentucky winner Cooley Master Class and Ridire Dorcha, France’s Luc Chateau and Troubadour Camphoux, who were fourth at Luhmühlen last season, and Ireland’s Joseph Murphy and Calmaro, who instead compete at Kentucky this week. New Zealand’s Samantha Lissington also opted to withdraw Ricker Ridge Rui from the waitlist.

18 horses and riders remain on the waitlist, from which substitutions can be made until 2pm BST this Sunday, May 1. The next horse and rider eligible to get the nod will be France’s Cyrielle Lefevre and Armanjo Serosah, followed by Great Britain’s Tom Rowland and Possible Mission.