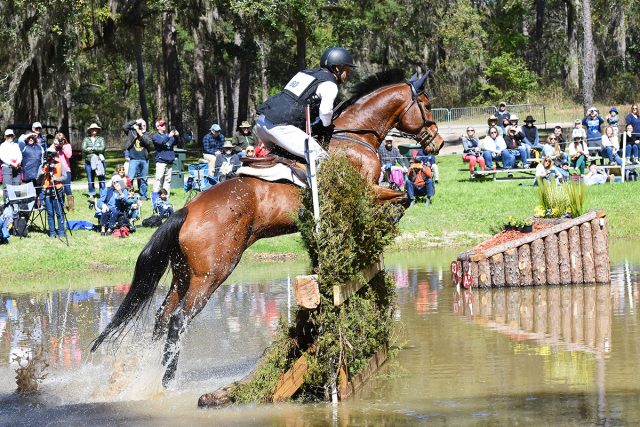 Today was Os(k)ar’s day as we saw two horses of the same name leading the feature classes at the 2020 Red Hills International Horse Trials. Brandon McMecahn and Oscar’s Wild lead the CCI4*-S and Alyssa Phillips and Oskar lead the Advanced.

Brandon proved that speed was king today on Mike Etherington-Smith’s cross country track. He and Oscar’s Wild, an 11-year-old Thoroughbred (Whiskey Wisdom x Rax) owned by Michael and Glenn McMechan laid down the fastest trip of the day, coming home just three seconds over the time. Their red hot performance launched them from 18th after dressage into the top spot.

This is the pair’s second season at the level, having made their four-star debut here last year where they finished seventh.

“I have a great horse – today is his birthday, so he wanted to celebrate by putting in a nice, fast round for me,” Brandon said. Happy Birthday, Oscar! 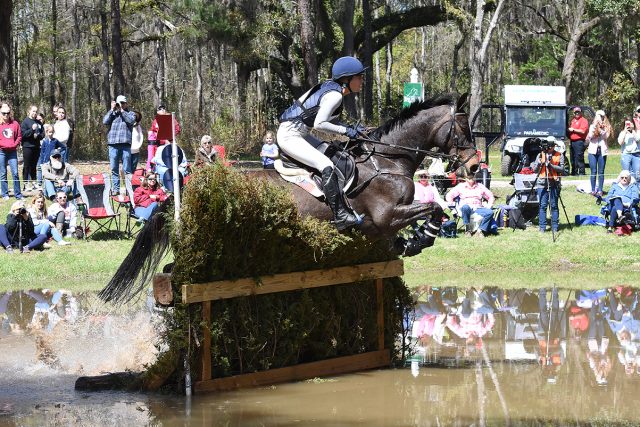 Similarly to the first phase, they were again close to identical today. Hallie was only just faster, finishing four seconds ahead of Sharon, for second place with Celien, a 13-year-old KWPN mare (Tenerife VDL x R Quicksilver, by Hamlet) owned by Hallie & Helen Coon. They added 11.2 time penalties for a two-day score of 42.6. 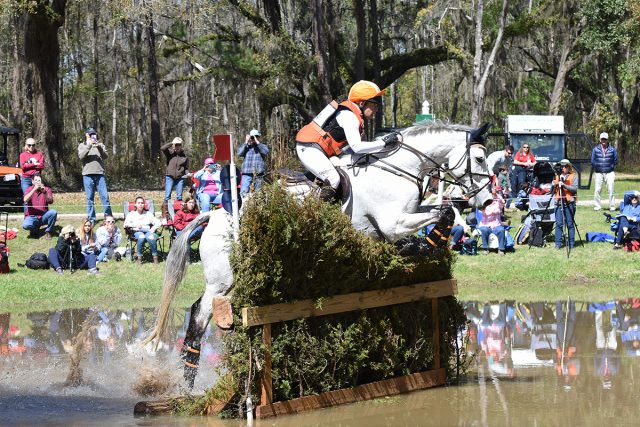 Sharon White and Cooley On Show are third. She and the 13-year-old Irish Sport Horse gelding (Ricardo x Jogantina, by Grand D’Espange), who Sharon owns herself, accumulated 12.8 time penalties for a score of 44.2. 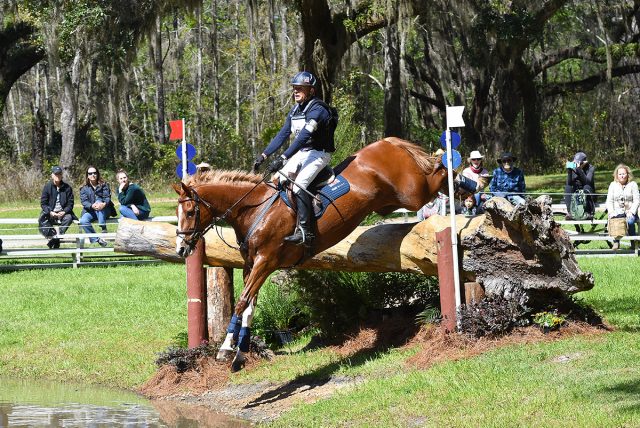 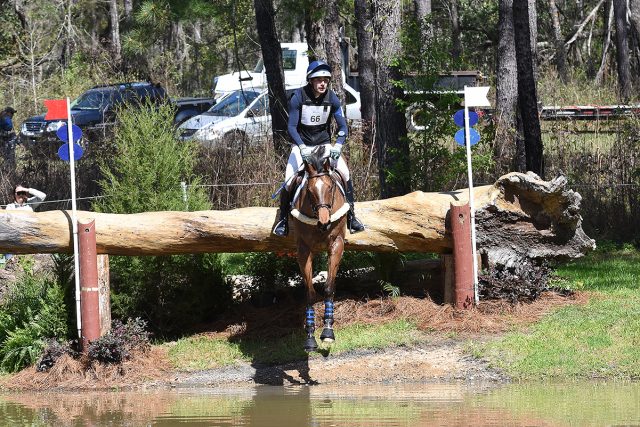 Chris Talley and the adored 11-year-old off-track Thoroughbred Unmarked Bills also benefitted from a speedy trip. The second fastest of the day, they jumped 17 spots to land fifth with 8 time penalties added for a score of 47.5.

With five rides in the division, Jessica Phoenix’s best trip was aboard her own Pavarotti for sixth place after adding 14.4 time penalties. She’s also 8th with Humble GS (48.2), 12 with Watson GS (52.7), and 22nd with Wabbit (61.5). She retired with Bentley’s Best on course today after having a stop at 14B. 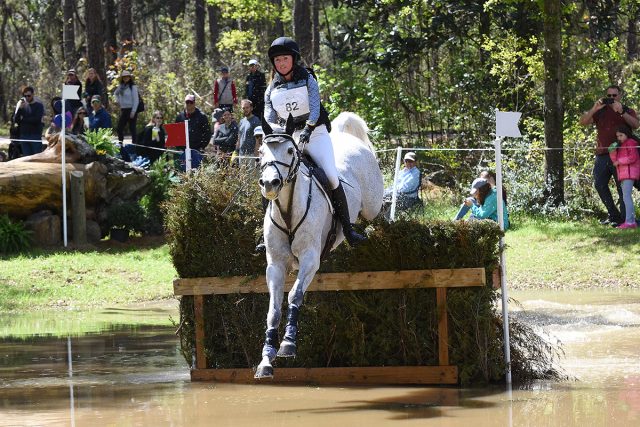 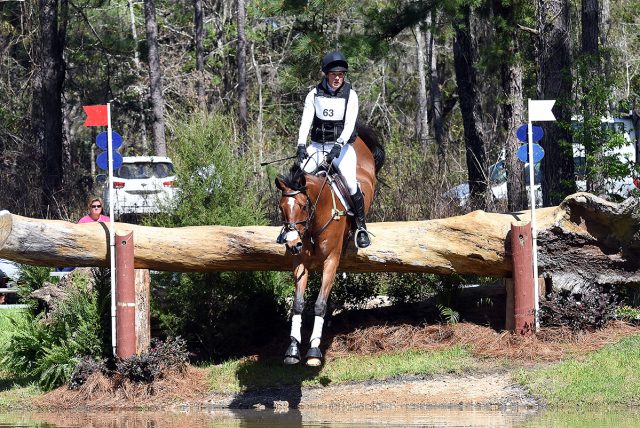 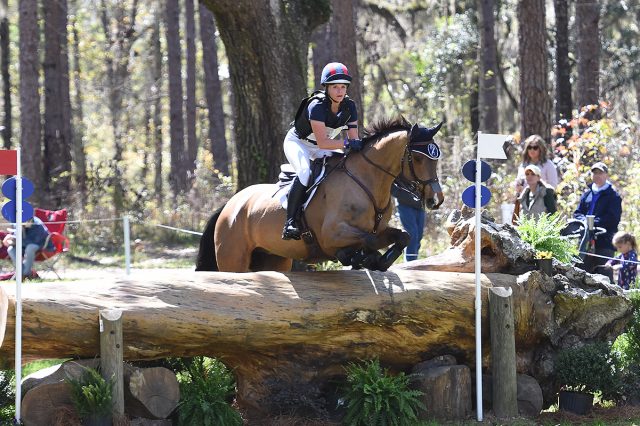 The time was equally influential for the Advanced division, and once again we saw the fastest pair — Alyssa Phillips and Oskar — take over the lead.

At 7 minutes and 9 seconds, Alyssa and the 11-year-old Holsteiner owned by the rider and Julie Phillips added 14.8 time penalties to sit on a score of 38.9. 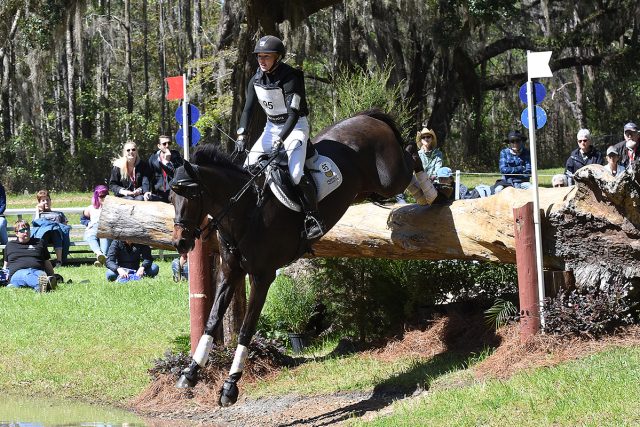 Overnight leaders Marilyn Little and RF Scandalous, a 14-year-old Oldenburg (Carry Gold x Richardia, by Lario), owned by Ms. Jacqueline Mars and Phoebe and Michael Manders, took an easy, confident trip around today, picking up 21.2 time penalties. That drops them to second place on a score of 41.2. 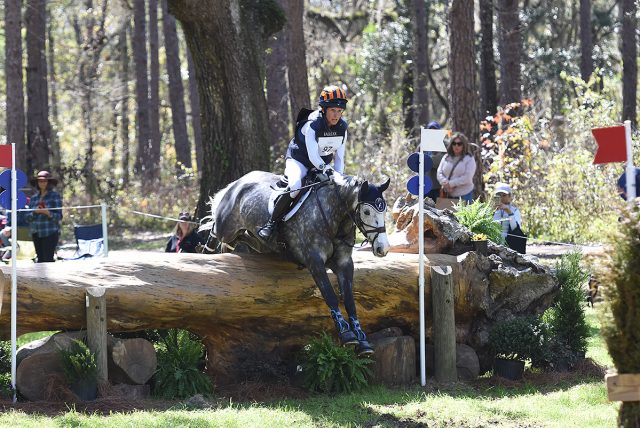 Liz Halliday-Sharp cruised around with Flash Cooley to hold their third place position. The 8-year-old Irish Sport Horse owned by Pru Dawes and Liz had 15.6 time penalties for a two-phase result of 46.1.

As predicted, the clock was the most significant obstacle riders faced today. Of the 29 horses in these two divisions, only three had jump penalties. Of the majority who went clear, only Brandon had less than 10 time penalties.

More quotes from the top

Brandon McMechan: “It really started to click in the last few years. I don’t have to take a lot of time setting him up. I think that’s probably the biggest think – we aren’t out there arguing. We’re out there as a team… after years and years of practice. I was hoping for a better performance yesterday after the dressage, but he won’t win the dressage. Today is the day he makes up ground.”

Hallie Coon: “She was a bit sleepy. We weren’t really set up timing-wise because of what was happening because of the holds, so I got out a bit too early. It was a hurry up and wait situation. Her warm up is so fine tuned at this point – we’re an old married couple, so I know exactly how long it takes,” she said. “I struggled to get her out in front of my leg, but she was such an honest horse. She picked up on the questions and takes care of it no matter where she is as long as I get her there and give her a decent ride.”

Sharon White: “He’s so much fun to ride, so it was definitely a good time. I think the time is just hard, but everyone is in the same boat, so it’s hard for everybody. I wouldn’t have wanted to go any faster on my horse. Mike ES said it best. He designed the course to have riders knock some cobwebs off, and that was perfect. It rode very well.” 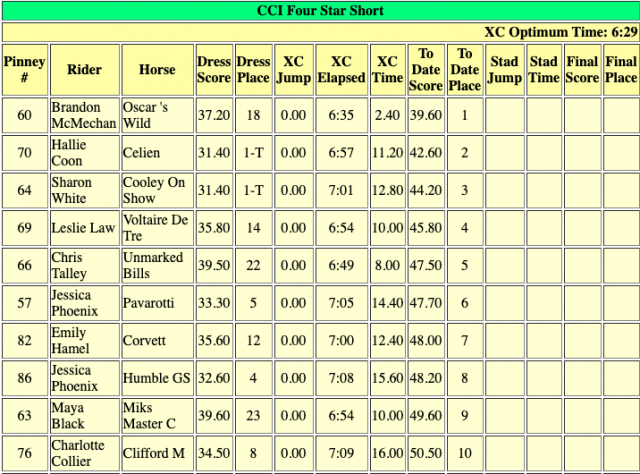 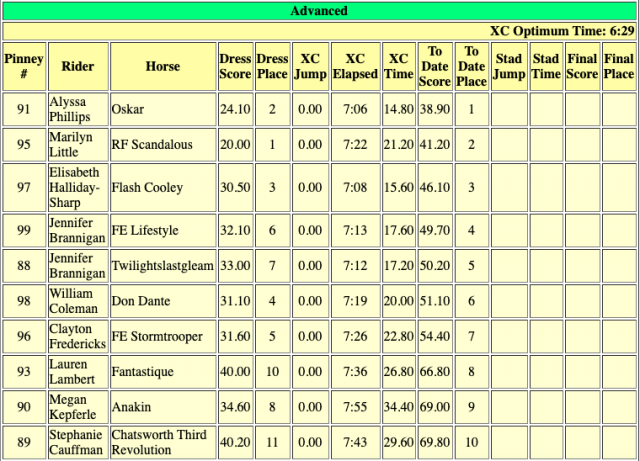