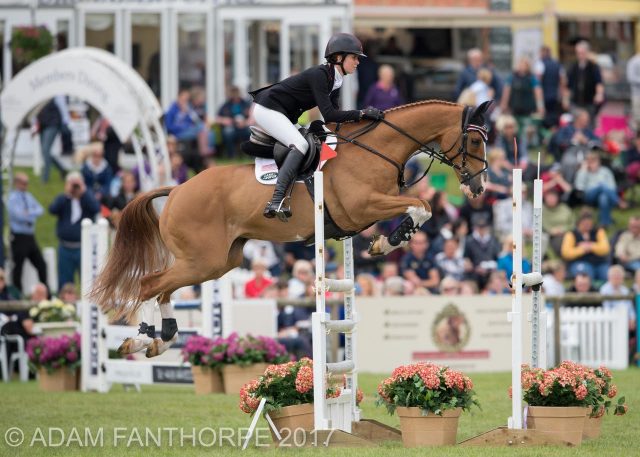 In the Under 25 CCI3* at Bramham International, the tough show jumping track yielded just three fault-free rounds, allowing a few more moves up the board on the final day of competition. Overnight leaders Will Furlong and Collien P 2 had a hefty 11.6 point lead going into show jumping and needed nine of those to solidify the win.

Caroline now tops off a whirlwind trip to Europe thanks to the support of the Karen Stives Eventing Endowment Fund Grant, and she’ll be heading home with her two rides this week. Mackenna Shea, who also received the Karen Stives Grant, will be staying in Europe longer after her trip got off to a delayed start.

“I have absolutely wonderful horses and support team,” Caroline said. “I am extremely honored to have been able to represent the USA at my first Nations Cup and at the Under 25. This grant has been the first big step for me on the international stage and I will improve the next time out.”

Looking to the senior CCI3*, Japan’s Yoshiaki Oiwa and Calle 44 are your winners, jumping one of just five double clear rounds this morning to overtake Gemma Tattersall and Quicklook V, who incurred five penalties. This is the first three-star win for this pair, who most recently came 13th at the Event Riders Masters at Chatsworth last month.

Japan also finishes a second rider in the top five with Toshiyuki Tanaka and Talma D’Allou, a 10-year-old Selle Francais gelding owned by Riding Club Crane. This pair finishes their weekend fourth position on a final score of 53.7 with just one time penalty added this morning. This is a very exciting horse for Japan, as this is his first CCI3* start.

Many thanks as always to Adam Fanthorpe for being our camera on the ground this weekend and at many other European events this year. Additionally, thank you to our readers for following along with our Bramham coverage. Onward!