Each day between now and the New Year we’re counting down the top 20 most popular videos shared on EN in 2021. The #1 spot goes to “Carrie Skelton Sets British Eventing Dressage Record of 5.5 (Yes, Really),’” which garnered 28,834 views when it was originally posted on April 10, 2021.

It’s not often that an early-season one-day event becomes the stage for a history-making ride, but that’s exactly what Norton Disney Horse Trials in Lincolnshire was transformed into in April , as one of its competitors set a new British Eventing dressage record under the critical eye of judge Christine Pappa.

“I thought it was a typo at first and kept waiting for them to change it to a 25.5,” admits Carrie Skelton, who scored an eye-watering 5.5 (no, still not a typo) in the BE100 Open [Training level] section aboard the Lancer Stud’s Ramesses B. “I usually get a 24 dressage, which I’m always over the moon with!”

Though British Eventing’s database of all-time scores isn’t wholly comprehensive, a quick text to EquiRatings’ Diarm Byrne put the score into context: it’s the best score since the database was conclusively pulled together, and with the progressive increase in quality in this phase over the last number of years, it’s highly unlikely that this has been bested. Carrie overtakes previous record-holder Rosie Bates, who scored a 6.3 aboard Forrest Dot Com in a BE80(T) [Beginner Novice] section at the same event last year and Michael Owen and Direct Galaxy, who posted a 7.3 in a BE80(T) at Kelsall Hill in 2019.

“Just make sure you tell everyone I was enjoying a Campari Soda in my white socks watching Messi when the call came,” says a mildly harangued Diarm. 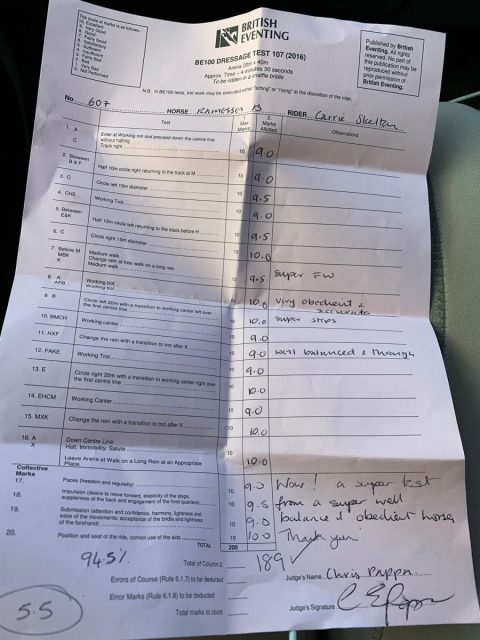 Here it is, folks: the most framable test sheet anyone has ever received. To put it into quite startling context, it bests Charlotte Dujardin and Valegro‘s world record 94.3% by two-tenths of a percentage point. Courtesy of Carrie Skelton.

Carrie took over the ride on Cairo, as he’s known at home, in 2020. Prior to their union, the eleven-year-old Irish Sport Horse (Ramiro B x Wannabe G) was produced by India Thompson, then competed for two seasons by five-star rider Richard Jones, before Martha Craggs, daughter of owners Emma and Marcus, took the reins for the 2019 season.

Though Carrie’s intentions for a full debut season were thwarted by the national lockdown, they still managed four events last year, forming a swift and successful partnership to end the year with a clear round at Novice under their belts as well as two placings and a win, which they notched up in a BE100 Open section at Little Downham Horse Trials.

“Cairo has a wicked sense of humour and will definitely let you know if you’re not on your game, but he gives me 110% every time and is an absolute joy to train and ride,” says Carrie, who has adapted her training regime to suit the horse’s unique needs. “I don’t school him much at home as he’s better fresh, so he does loads of schooling on hacks instead. He finds the dressage so easy and is so correct that it means I can concentrate on being super accurate.”

It’s always tempting to look at an achievement like this under a microscope to try to find out how it was done – and in this case, it probably doesn’t take much searching. Carrie, who worked as an event groom from the age of 16 until she was 24, also worked at a dressage stud, which allowed her to hone her flair for the flatwork.

“I got some amazing experience on seriously top dressage horses with top trainers, which I think has really helped,” she explains. Now, with her grooming days behind her, she’s focusing on her own riding career. Without abundant funding behind her, she’s relied on that finely-tuned work ethic to make it happen, gaining teaching qualifications along the way to help make the financials work. A dream alliance with The Lancer Stud, based in Suffolk, has helped make her dream a reality.

“I ride solely for them now, and they have some seriously special homebreds coming through which is very exciting,” says Carrie, whose role includes backing, bringing on, and competing a selection of the stud’s youngsters. She’s in good company there, too – among the Lancer Stud’s roster of riders is another British record-breaker, Piggy March.

Though Carrie and Cairo’s day at Norton Disney didn’t end quite how they’d have liked – they incurred a frustrating technical elimination on cross-country for missing out a fence in what was otherwise a classy clear round – the pair have their sights set on bigger things to come.

“I would love to go 2* later this year with him as he’s more than capable – I’ll definitely walk the xc a lot for that,” laughs Carrie, who regrouped to compete at the event after a crashing fall while riding at home two days ago. “I’m hugely grateful to Lancer Stud for letting me have the ride on him as it’s such a treat to ride a more experienced horse after doing youngsters for so long and I hope I can do him justice!”

Carrie has very kindly shared a video of her test with EN – though she admits wryly that “the funny thing is I can still pull the test to pieces when I watch it and see a million things I could have done better!” Here’s how they made it happen: