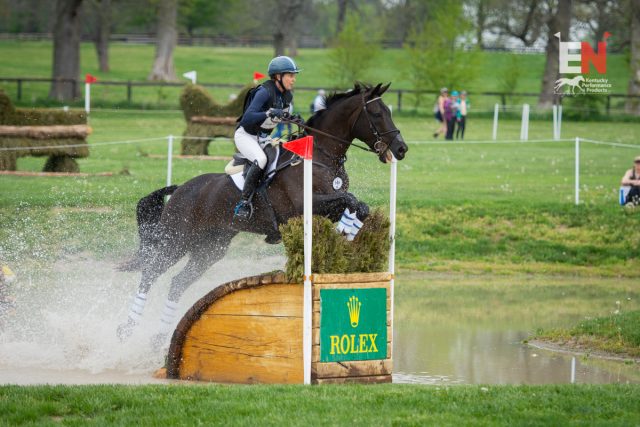 When Valerie Pride sat down during the off season to do some thinking on what the 2022 season would look like, she focused on something other than a major spring five-star event. It wasn’t for lack of a capable horse; her longtime partner, Favian, finished in the top-25 at Maryland 5 Star last year and had gone into vacation feeling healthy and sound. But while more five-star events remain a goal of Valerie’s, this season emerged as an opportunity to pursue a different goal: world experience.

“I’ve never had the experience to go overseas, not even to groom,” she explained. “I’ve been to Badminton as a spectator/eventing junkie, but that’s about the extent of it. Favian is getting to be slightly on the older side, and he’s feeling wonderful so it felt like this was kind of my chance to go and do it.”

At 14, Favian is certainly well within his competitive prime period, and Valerie wants to make the most of having a happy and sound partner to go on adventures with. So she set about a whirlwind of planning, contacting British eventing great William Fox-Pitt (with whom she’d connected over the winter thanks to a clinic organized by Sara Kozumplik and who she also shares a connection with through Mary Guinness, Tamarillo’s owner), who graciously offered to let her base with him in Dorset, England.

Initially, the Luhmühlen 5* was a goal for Valerie this spring. But with Covid still running rampant and some areas experiencing closures and shutdowns, she felt it safer to wait. From this decision came another: “The more I was thinking about it and talking to people, the more I thought going to be competitive at a four-star just felt like an excellent plan,” she explained.

Thus, a plan began to take shape to compete at Blenheim Palace International’s September CCI4-L — which as recently as 2021 yielded a Kentucky runner-up in Great Britain’s Yasmin Ingham and Banzai du Loir (who were also just tapped to represent the defending champs at Pratoni next month).

Of course, leaving behind a fully operational business isn’t an easy task. On top of the travel logistics, Valerie’s grandmother passed away shortly before her departure. Amongst all of the turbulence, though, Valerie maintained a steady determination. “I’m so grateful to my clients,” she said. “I realize this is a big ask on them because they would like me here, but we’re going to try to do FaceTime lessons. And that should be able to keep everyone going. My husband is amazing, I already leave him to go south for the winter and now I’m leaving him again to go to England! He’s going to come over for Blenheim.”

Since arriving in England earlier this month, Valerie’s gotten off to a successful start — though she’ll be the first to admit it’s been quite the whirlwind of a learning experience! #Supergroom Conner Ann Clark flew over with Favian, where he was received by the capable team at Fox-Pitt Eventing before she turned around to return to the U.S. and help run the ship at home for Valerie. She also was unable to fly Favian’s famous emotional support mini, Theodore, due to paperwork complications (luckily, William has offered up his daughter’s Shetland as a stand-in for Theodore), but has reported that Favian has taken the changes in stride.

Here are some missives from Valerie’s email updates, which you can sign up for on the Blue Clover Eventing website:

“I have been very lucky that William has been here nearly this entire week for lessons. I will call it Blenheim Bootcamp! In my dressage lesson, I thought three times at least the lesson was over and ‘oh no, pick back up those reins and let’s make it better’ and that inevitably leads to something else to work on. And we did!

He emphasizes softness and stillness which is rather incredible for a man whose left leg is as strong as my entire body. He has declared war on Favian’s mouth — Favian chomps as a habit. It doesn’t matter if it’s in his stall, in the crossties, or in a 5* dressage test. It’s his thing. Well, William doesn’t want it to be a thing!

Another William thing! Tails! Oh boy, does this one make me nervous. I’m watching a jump session the other day and William disappears after warm-up (ok maybe not all that unusual) but the re-appears talking to me about something else with the pair of scissors from the feed room visible in his hands (unusual). He walks up to the horse, has the rider stop, and then and there bangs it nearly above the hocks. Satisfying? I suppose so because it was immediately gratifying to see. Terrifying? Definitely. Because I know his next target — even though I have explained that we have a fake tail #sleepwithoneeyeopen

I do feel forever grateful that they have bestowed upon us a real British tail wrap. It’s so flattering and proper! Now they must teach me how to actually tie it.

As silly as this sounds, the other biggest takeaway from this trip has been about walking. Thus far I have spent you-don’t-even-want-to-know how much money and invested so much time and effort into walking in my daily lessons. It’s so hard! To walk with a purpose is really a feat and yet all of Williams horses do it without an ounce of hesitation. For hours each day. Favian and I are playing catch up and making literally every step count. I have a new faith and confidence and William to back me up if Favian doesn’t want to hear it!

I recognize my limitations and have adopted a fitness program in the gym upstairs in his office. I call it my dojo. You walk in to hundreds of pictures on the wall. Mostly winning. Some epic saves, and some epic fails. Championship trophies are on the ground being used as door stoppers! In the middle of my most trying, defeated moments of the workout session, I look up to see William smiling on some podium or grinning on a victory gallop. And I fight. And I focus! Don’t you try to coast through your week — you know I won’t, either!”

Valerie and Favian enjoyed a sixth place finish in their first English event at Aston le Walls two weeks ago, and next Valerie will jet up to Scotland to judge at Blair Castle International this weekend. Above all, she’s enjoying the full immersion into a world-class program, eager to bring her new knowledge back home. The support she’s had to make this trip happen has been immeasurable, she says. “It just really feels like so many people are trying to make it work. There is some pressure — you want to do well — but it’s about the experience and being able to bring that back to help everyone else.”

Blenheim Palace commences during the same week as FEI World Championships for Eventing, and we’ll be sure to keep up with Valerie and Favian as their English adventure continues!