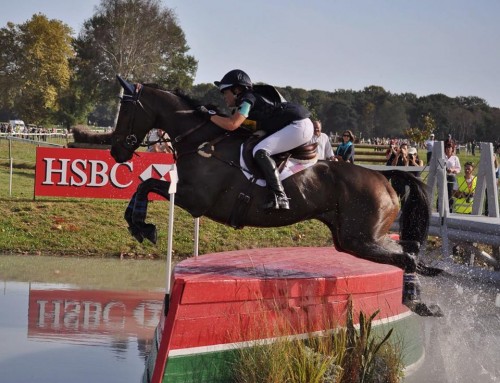 Eventing Chef d’Equipe David O’Connor spoke at length over two days about how he envisions the development of the United States Young Horse Program at the USEF Young Horse Symposium held recently in Lexington, Ky. We are entering a period where our 4- and 5-year-old championships are becoming competitive enough that we can consider improving and expanding the program for the future.

This year, the Future Event Horse and Young Event Horse Championships at Fair Hill and Galway Downs were the most successful yet, drawing a large crowd of talented, up-and-coming horses. At the moment, one can qualify with just one competition from a qualifying event throughout the year. Judging is a combination of a subjective score in hand; an overall dressage score; and a jumping score that combines style over show jumps, cross-country aptitude and ability to gallop efficiently. The conformation is 15 percent of your total result, the dressage is 35 percent and the jumping makes up the remaining 50 percent of the final score.

All around the world now, there are extraordinarily competitive 6-and 7-year-old young horse championships, which leaves the U.S. a little behind the curve in developing event horses. Le Lion d’Angers Young Event Horse Championships, widely considered the most competitive for this age group, has a CCI* for 6 year olds and a CCI2* for 7 year olds. They also have a success rate of 43 percent for top finishers going on to become competitive at the CCI3* and CCI4* level in the future, which is an enormously large percentage.

So where does this leave U.S. horses and their riders as they try to climb the levels? David O’Connor is proposing expanding our already burgeoning program into the 6- and 7-year-old divisions, with a CIC* championship and a CIC2* championship for each respective age group. Each group would have to become more competitive by achieving a National Qualifying Result at not one but two selected qualifying competitions throughout the year. These pre-selected competitions would also offer an additional incentive to young horse competitors, with a $500 prize money per competition given to the top three finishers in each age group.

So how do we go about selecting horses that are not only successful at their current levels, but show promise for the very top levels of the sport? David maintains that the difference between a horse that can gallop for 10 minutes and a horse that can gallop for 11 and a half minutes is enormous. The one thing that separates a top-level horse from one that can have enormous longevity at the top level is the quality of the gallop, which leads us to the subjective part of the YEH judging.

The requirements of the dressage in eventing haven’t changed terribly much in the past few decades, but it is undeniable that riders are better at it, and so it has become more competitive and important. The show jumping is significantly more difficult, with higher jumps, flatter cups and lighter poles, and so we have moved more toward the warmblood horses that often show greater aptitude for these two disciplines. However, in the video below, you’ll see David explain that while those two things are important, the gallop of the horse is integral.

He starts by showing Andrew Nicholson and Quimbo, winners of Rolex 2013. Quimbo is a 9-year-old Spanish-bred horse who has some Thoroughbred in his bloodlines, but mostly warmblood. He has been with Andrew since he was 3 and came up through the YEH channels. The horse is a classically beautiful mover and an incredibly scopey and careful jumper, and thusly scored quite well at all his young horse championships.

As you watch his cross country, you can see that his gallop does not cover a lot of ground, but it is masked by Andrew’s effortless sense of rhythm and pace. Andrew himself has admitted that he questions Quimbo’s ability to go the distance, and while the horse has won both at the CCI3* and the CCI4* level, David feels that the horse’s longevity is at risk at this top level due to his lack of quality in the gallop, which falls apart nearing the 10-minute marker on cross country. However, this horse is incredibly careful over jumps and has a beautiful bascule on the third day, and so still maintains his success.

The next pair that we are shown is Manoir de Carneville and Sinead Halpin. Tate is a Selle Francais, but he has quite a lot of Thoroughbred blood in him, as you can see from just looking at him. David shows us how Tate’s gallop actually improves throughout the course and attributes his ability to go clean and inside the time at both Rolex and Burghley to this singular attribute. While Tate might have been marked down in a YEH class for his distaste for contact in the dressage and slightly unorthodox jumping style, he has obviously proven himself as a serious competitor at the very top levels.

Lynn Symansky and Donner are the last pair to be analyzed on the video below, as Donner represents the other end of the spectrum. He came from the racetrack and is a pure Thoroughbred, so he naturally has a great quality to his gallop. When you watch Donner, you realize that as he reaches the 10-minute marker, he’s just getting warmed up, and he barely struggles to finish an 11 and a half minute course clear and within the time. However, he certainly would have been marked down in a YEH championship due to his lack of quality in the trot, as David points out that he’s got a great canter and a great walk but not a wonderful trot.

In terms of creating a championship that rewards the best horses for the very top levels, David wants to be sure to add a subjective portion to the CIC* and CIC2* championships that addresses the quality of the gallop. Not only does this increase the chances of finishing clear and within the time on the second day, but the horses that finish cross country easily are certainly the horses most likely to be fresh and clean on the final day of competition.

Do you agree with these assessments, Eventing Nation? How would you like the YEH program to proceed in the future? Do you have any additional categories that you believe reveal the true ability of a top-level horse?