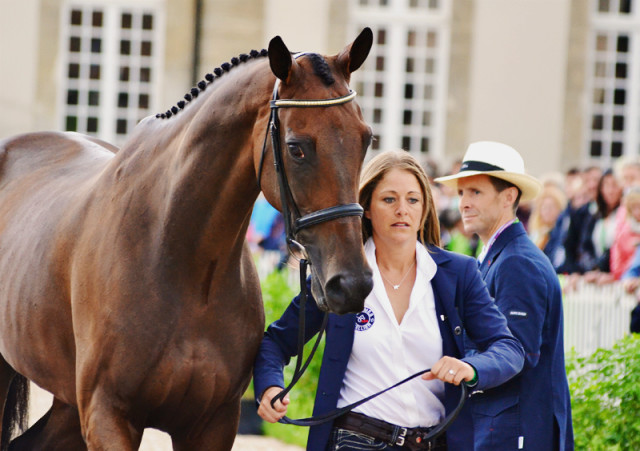 Not only is Donner the only OTTB on Team USA, he is the only horse that was actually bred in the USA, the rest being European imports. Recently the Retired Racehorse Project took a closer at this pair that is truly representing Team USA through and through!

Donner was foaled on April 18, 2003 in New York. His dam, Smart Jane, was a sound and tough race mare that saw 45 starts, mainly in her home state of Maryland. She etched out three wins and was retired at age six after pulling up in her last race at Pimlico. 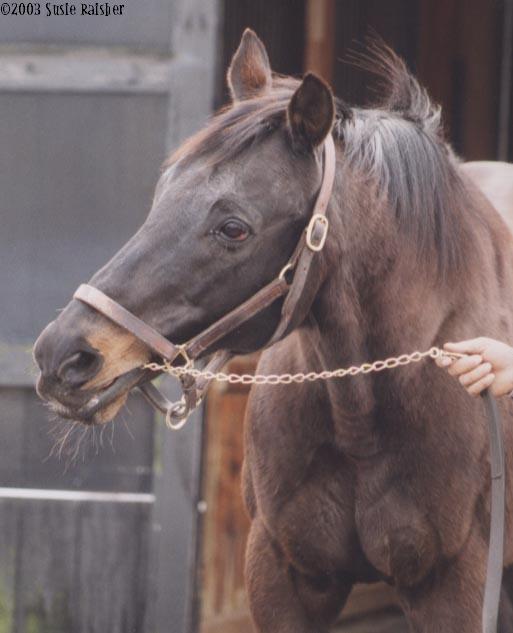 Donner’s grandsire, Smarten, at age 17 in 2003. Photo courtesy of finalturngallery.com

Smart Jane relished a long distance — all of her wins came at a mile or more and she ran her best the longer the races went. This is no surprise when you take a closer look at her pedigree. Smart Jane is by the well regarded Maryland stallion Smarten, an extremely tough horse that had both speed and stamina to spare. In his three-year-old season, he had the misfortune to run into a whirlwind named Spectacular Bid but still managed six wins out of 17 starts, including the Illinois, Pennsylvania, Ohio and American Derbies. His very high in the money (1st, 2nd and 3rd placings) percentage of 81% showed that he was game in every race he started in. Sent to stud in 1980, he would prove a cornerstone of Maryland’s Northview Stallion Station for nearly two decades. Smarten’s best runners include Classy ‘n’ Smart, a Canadian Horse Racing Hall of Fame inductee and dam of U.S. and Canadian Hall of Fame filly, Dance Smartly; Pennsylvania Derby winner Smart Guy; and the outstanding Kentucky sire Smart Strike.

Going one generation further, Donner’s other ancestors also passed on a huge amount of stamina and class down the line. His second dam, Synclinal, was unraced but sired by one of the best stallions of his generation, Vaguely Noble. Vaguely Noble was an Irish-bred Thoroughbred that was considered one of the top horses in Europe in the late 1960s. He beat the best of his generation, including the Epsom Derby winner Sir Ivor, in the 1968 Prix de l’Arc de Triomphe and was promptly purchased and syndicated to stand in the U.S. at Gainesway Farm in Kentucky. There he would become a valuable source of stamina for the American market and become both a leading sire and a leading broodmare sire. His best offspring include the great turf mare Dahlia, Epsom Derby winner Empery and the sensational Exceller. 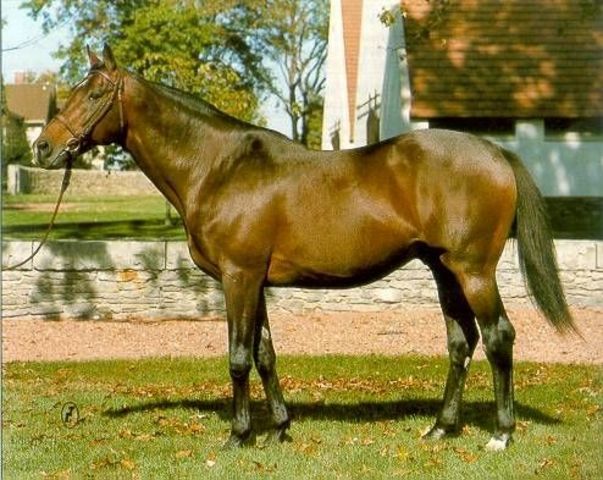 Vaguely Noble, Donner’s great-grandsire and an important source of stamina in pedigrees. Photo courtesy of finalturngallery.com.

Donner’s third dam (his great-grandmother on his mother’s side) showed the family’s class in another light. Unlike her granddaughter Smart Jane, Hippodamia (by Hail to Reason) loved to run shorter distances and loved to run them fast. American-bred but racing in France, she took home the most important race for French two-year-old fillies, the Criterium des Pouliches, and earned herself the honor of Champion Two-Year-Old Filly in France for 1973. She would follow that up with a second in the French One Thousand Guineas in the following season. But it was in the breeding shed where she made a lasting mark.

Hippodamia was the dam of eight winners from her 15 foals, all bred in the U.S. Her best was Globe (by Secretariat), winner of the Grade 2 Excelsior Handicap and Grade 3 Grey Lag Handicap. Her filly Hoya was a stakes winner in France and then came back to the U.S. where she set a new course record for 1 1/2 miles at Keeneland. Her daughters proved to be stellar broodmares as well, producing 17 stakes winners in succeeding generations.

Sent to the broodmare barn in 2000 with good expectations considering her solid family and race record, Smart Jane produced a number of foals, including the multiple stakes winner Five Diamonds (by Flatter) and stakes-placed Smart Tori (by Tenpins). But it was her third foal, a 2003 colt by Gorky Park (Fr), that would make history.

Donner’s sire, Gorky Park, deserves some recognition as he may well be the source of Donner’s jumping prowess. A French-bred stallion, but the product of an American sire and dam, he raced but was successful not in the flat races like the rest of Donner’s family but over jumps in hurdle and steeplechase races. Starting his career in his native France, he was eventually imported to the U.S. and into the barn of the great trainer Jonathan Sheppard with whom he would win the Continental Cup Steeplechase Handicap at Great Meadow in 1991. Retired after his next race, he then stood at stud in Virginia and New York, siring both flat winners and several notable jumpers.

Donner’s racing career did not begin until July of his three-year-old year, likely due to his large size (17.1 hands). His first race, a Maiden Special Weight over 1 1/8 miles on the turf at Belmont Park, was probably designed to take advantage of his big frame and distance bloodlines, but he tired quickly and finished last. Started again in a nearly identical race two weeks later, Donner (racing as Smart Gorky) again finished last, nearly 30 lengths behind the winner. A new plan soon formed.

Dropped down to the $15,000 claiming level and switched to dirt, Donner showed more interest in his next start and finished in fourth. His connections dropped him down another claiming level, this time to $8,000, in the hopes of getting a win and some confidence for the youngster. Donner pressed the pace in second for the first time in his career but faltered in the long stretch run at Laurel to finish fourth once more. 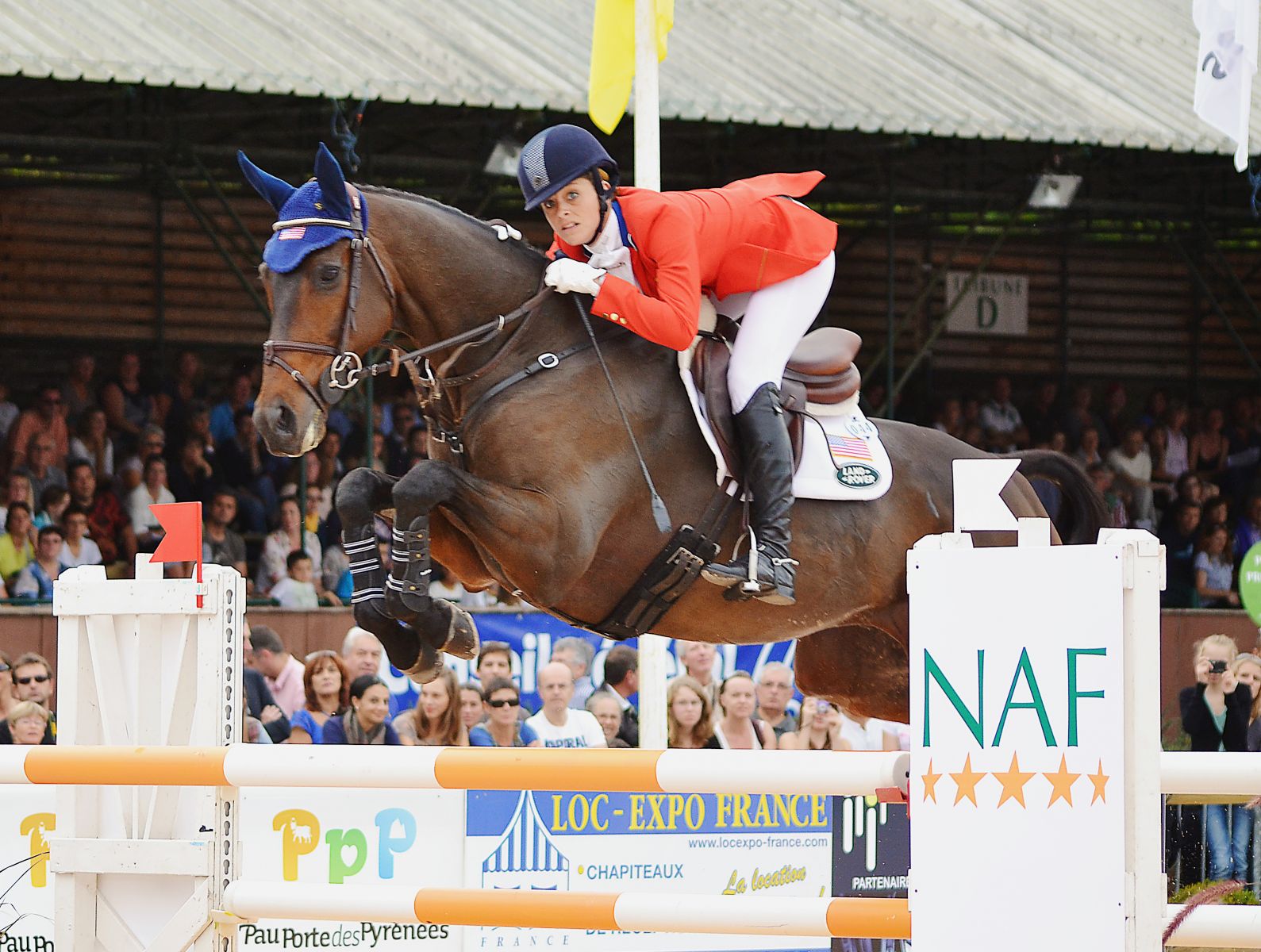 Lynn and Donner at Pau. Photo by Jenni Autry.

One a cold December day, right before Christmas in 2006, Donner’s racing connections tried once more to see if their big, gangly gelding wanted to be a racehorse. They entered him once more for a $8,000 claiming tag at Laurel Park and kept the distance to a mile. A big field went to the post that day, 11 in all. Donner raced in the pack, looking like a horse with every chance, but weakened in the stretch, disinterested or tired. A racehorse he was not to be.

Newly retired and looking for a new career, Donner was re-started and then purchased by upper-level eventer Lynn Symansky in 2008. She describes her first impression of the big young horse in a recent blog post in the “Chronicle of the Horse”:

I definitely didn’t know he’d turn into the horse I have today. He was a good athlete and showed a lot of promise, but he was rather flighty and spooky—Donner is aptly nicknamed ‘the deer.’ Some horses are the type that can fit into several disciplines, but Donner never seemed to fit perfectly into any one mold. He didn’t have the movement to be a dressage horse, he wasn’t scopey enough to be a pure show jumper, he wasn’t classic or relaxed enough to be a hunter, he wasn’t quiet enough to be a hunt horse, and he sure didn’t have the feet to be an endurance horse. But what I did know from the very beginning was that he always showed up for work.

Lynn’s work soon paid off and they moved through the lower levels quickly. By 2011 Lynn and Donner found themselves as part of the Gold Medal winning U.S. Team at the 2011 Pan American Games and in 2013, they were not only the Best Conditioned, Best Turned Out and Highest Placed OTTB at 2013 Rolex Kentucky CCI4*, they placed fifth overall, the highest placing American at the nation’s premier three-day event. They’ve had some ups and down since then but the WEG selectors had faith that, despite a less-than-perfect preparation, Donner would show up when he was needed the most. Tomorrow he and Lynn will have their opportunity to shine on the equestrian world’s most prestigious stage, representing their country on multiple levels at once!