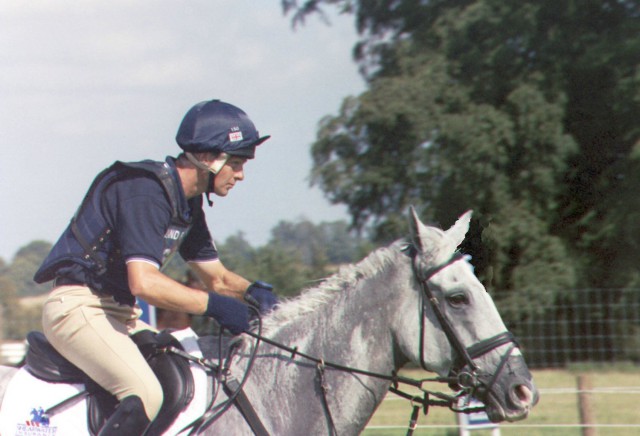 Our thoughts are with the many individuals whose lives were touched by Shear H20 (“Solo”), the great grey Irish-bred gelding who was successfully competed by Leslie Law in the 2000 Olympics and beyond.

Sadly Leslie’s great horse Solo (H2O) had to be put down today. Medalist at Sydney and 2nd and 3rd at Badminton and that is just off top of my head. Leslie adored that horse and often praised him as his most favorite most consistent horse ever. Many thanks to Claire Llewelyn who gave him a lovely life post Leslie and the Jeremy Lawton and Susan Lawton who proudly owned him.

Solo was the first of two similarly striking ISH brothers upon whom Leslie would win Olympic medals for Great Britain — Team Silver on Shear H20 in 2000 and Individual Gold on Shear L’eau in 2004. Leslie and Shear H20 completed Badminton and Burghley twice apiece with no cross-country jump penalties between 2002 and 2004, finishing in the top five all but once. They were also on the Bronze Medal winning team at the 2002 World Equestrian Games in Jerez de la Frontera, Spain. The horse was retired in a ceremony at the European Eventing Championships at Blenheim in 2005.

“Solo has realised dreams for me I did not even imagine I had,” said co-owner Jeremy Lawton in this “Horse & Hound” article published on the eve of Solo’s retirement. “For Leslie, he was the horse that finally gave him the success he had worked and strived so long for. If Solo had not been as good as he was we might never have bought Shear L’eau and Leslie might not be Olympic Champion.”