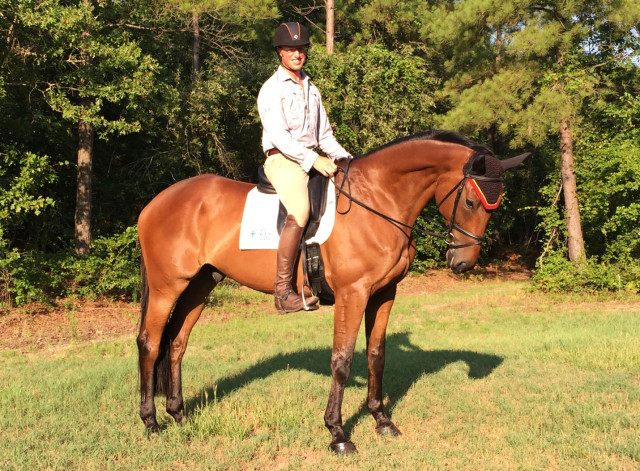 Doug Payne has a new upper-level ride in Debi Crowley’s Vandiver, an 11-year-old Trakehner gelding by Windfall that Werner Geven campaigned through the CCI3* level and competed at the Rolex Kentucky Three-Day Event this spring.

While Doug has an exciting two-star horse in his own and Kristin Michaloski’s Lysander, he’s been without a three-star horse since selling Crown Talisman to Neil and Madelaine Blackwood as a ride for Nick Gauntlett in the UK last year. Doug said he’s been looking for a new upper-level horse ever since.

“I watched Vandiver this spring at Kentucky, and I was thinking that he looked like an incredible athlete,” Doug said. “With the departure of Crown Talisman, I was searching for the right horse to try to fill the hole that created. Debi has been very supportive, and I feel incredibly lucky to have the opportunity.”

Called “Quinn” in the barn, Vandiver certainly has the breeding to be a top event horse. Bred by Debi Crowley at her Cotton Meadows Farm in Elkmont, Alabama, Vandiver is 72% Thoroughbred, by Athens Olympic team bronze medalist Windfall and out of the Trakehner mare Visions of Grandeur, by the Babamist son Mystic Replica. Click here to view his full pedigree.

Vandiver has twice completed the Dutta Corp Fair Hill International CCI3* in 2012 and 2013; Werner retired him on cross country at Rolex this spring in the horse’s first attempt at a CCI4*. Doug is hoping to take Vandiver back to Fair Hill this fall, where he last competed in 2013 aboard Crown Talisman, finishing in fourth place in the three-star.

“I can’t wait to see how he goes out once we start competing,” Doug said. “He has a ton of experience. I’m trying to figure out what he’s all about and form a partnership. He’s so genuine and hardworking. I’m really excited about him.”

Doug plans for their first outing to be in the Intermediate division at Millbrook Horse Trials next month, and he has been competing Vandiver in jumper classes at the Tryon International Equestrian Center in preparation for their eventing debut. Check out a video from Tryon below, and follow DPEquestrian on Facebook for updates.