The 2022 EN Blogger Contest finalists were asked to write a piece telling the story of an epic Chinch adventure as one option for their Round 2 submissions. The following piece is published unedited. Your feedback will help us select our final winner! Use the rating poll below to give this post a thumbs up. Votes will be factored into our final decision.

I’m Cheg, 41, an armchair eventer living in the wilds of North Wales with five cats, a small flock of rescue hens, two ducks and my husband. All around me – outside my garden fence – are rolling hills and green pastures which give me serious field envy. There’s no road to our house, just a hairy dirt track described by the Realtor as ‘Not for the faint-hearted’. I saw it and immediately wanted to live here!

I have watched all of the available eventing replays at least three times each. Language is no barrier – I’ve listened to so many hours (months, years…) of commentary that I can translate from French, German, Polish, Dutch etc. When I’m not vicariously galloping across the terrain of the world’s cross country tracks, I work as a freelance education writer.

Not only have I fallen off during a dressage test, but I’ve also eaten the dirt of a showing ring. And I’ve been catapulted to the ground by a rather nasty buck three strides before the first show jump. Despite a number of starts, I have no idea how it feels (in real life) to cross the finish line of a cross country course. I still loved that pony though.

My big win came at my Pony Club’s annual awards where I was presented with ‘Most Persevering Rider’; the reason: ‘Despite all his attempts to rid himself of you, you just keep patting him and calling him a good boy’.

I dream of one day having another pony companion who’s as naughty/cheeky/enthusiastic/fun as Barnaby was.

What do you get if you take the best bits from each of the 5*s – brilliant Burghley, plucky Pau, breathtaking Badminton, kickass Kentucky, legendary Luhmuhlen, awesome Adelaide and marvelous Maryland – and mash them up into one spectacular event?

Welcome to Burpamintucklulaland, a stratospheric event on a whole new level, literally.

Before you faint at the thought of 9.10 meter jumps and wonder whether horses have evolved to grow wings, let me illuminate you:

The event began with the rumble of trailers, happy “Howdies!” being called from rolled down windows and excited neighs ringing out every so often – all interspersed by the squeaky chatter of a small rodent. Stables became homes to superstars, the lorry park began to resemble a small city and outfits of all fashions were hung on saddle racks ready for the first horse inspection. The air crackled with excitement and static from the media tent.
I’m here to bring you all the news from the sparkling event:

✓ Who was held at the horse inspection and, most importantly, what were they wearing? ✓ Which horse decided to improve the B test with a ‘Jump for joy’ after the ‘Half-pass right’ between K and X?
✓ Who tore up the cross country course certifying themselves as dazzling human/horse/mythical being combinations?
✓ Who zipped round the show jumps with a stylish clear to finish on their dressage score and ultimately become victor of this star-studded event?

All this, and more, will follow shortly, but first I have other – according to Chinch – even BIGGER news…

It started off as speculation: a whisper making its way round the site. Grooms, mid-braid, shook their heads in disbelief. Riders stood at half-strides between combination fences. The Eventing Nation team was devastated. EquiRatings got their calculators out. The ground jury wondered if the show could go on.

The commentators put out an announcement. Had anyone seen Chinch? 10 inches tall, weighing around 2 – 2.5lbs (depending on his snack choices that day), with a soft white belly and a fluffy tail, known for schmoozing and having a penchant for riding double with the world’s eventing greats, number one mascot and all around super rodent. 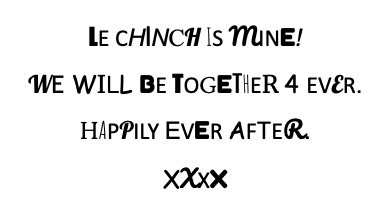 EN’s Tilly took to the loudspeaker to tearfully ask anyone with information to come forward. She’d be based at the missing children/phones/pets/chinchillas tent. There would be a Golden Chinch Award for intel leading to the little guy’s safe return. 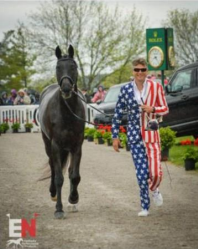 According to one source, Chinch had been spotted jogging along with Boyd Martin, tucked into his Stars and Stripes suit pocket. 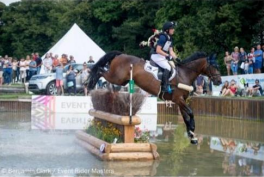 Another witness had seen a flash of Chinch fly by, having the ride of his life pinned to Michael Jung’s back with his friend Willberry Wonder Pony.

Ingrid Klimke’s helmet cam had picked up someone small and furry enjoying the hospitality, gin and tonic in paw clinking “Cheers!” with Will Coleman and Chin Tonic. 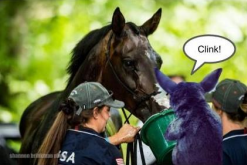 Tom Carlile had made an appointment with Chinch for some coaching on the jump from first time 5* to 35* and confirmed that tickling Chinch’s soft belly had helped to settle his nerves. 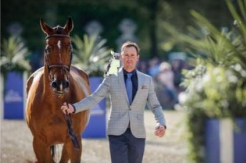 Super mascot and coach to the stars. Photo by Tilly Berendt.

The judge at C was sure she’d seen a chinchilla matching his description cantering down the centerline with Ros Canter. 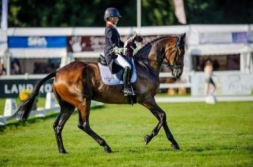 Chinch is in the arena. Photo by Tilly Berendt.

Clayton Fredericks had spotted Chinch listening to ColdPlay (it’s not clear whether he meant the band or the horse). 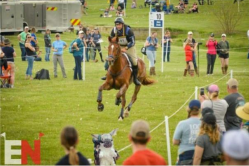 “Look at the stars…” Photo by Abby Powell.

Someone in the warmup arena had heard an overly confident squeaky voice giving Oliver Townend advice on how to perfect his flying changes. 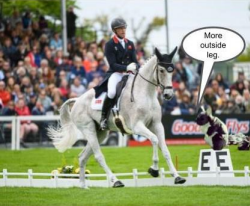 Team Price reported that their kiddos had made friends with a rodent whilst playing near the Head of the Huntsman’s Sunken Road Crossing Footbridge combination. 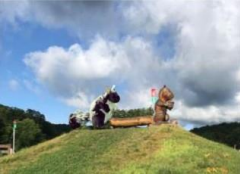 The Horse and Hounders had seen him in the media tent helping Sam Watson format a spreadsheet.

“First you turn it off…” Photo by Tilly Berendt.

Andrew Hoy came forward to say he’d invited Chinch over to his trailer earlier that day to try on his Olympic medals and that he seemed to be on winning form. 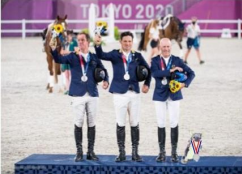 EquiRatings ran the stats. There was a 62% chance that 10.5% of the witnesses may not have reported the data accurately. The probability that the kidnapper wasn’t British was high. The simulations showed Chinch was likely snatched sometime after the 15th round of show jumping but before the 28th. The ransom note was predicted to be the most significant indicator but, unusually, the team couldn’t pin down a clear lead.

Just when it seemed like Eventing Nation would be returning to their offices without their trusty sidekick, hope came in the form of Chinch’s favorite corn-based snack. William Fox-Pitt had caught his dogs following a trail of slightly chewed popcorn towards the stables. The prize giving was delayed as everyone gave chase.

In their stables, the horses were enjoying some downtime after their impressive efforts over the last few days. Hay was being munched; water was being sloshed; sawdust was being pawed. Classic Moet stuck her head out to see what was going on. An unusual flickering was coming from the box next to her. A corny love song drifted over the door, followed by some smoochy sounds.

Upon investigation all became clear. Romantic Love was chilling, Gwendolen Fer’s phone wedged in the hay rack playing a rom com. Tangled up in his tail was a familiar gray rodent.

We’re still not sure whether Chinch was truly being held against his will; he looked pretty cozy when we found him, full of popcorn and cheesy chat up lines. It’s questionable whether the ransom note may in fact have been Romantic Love getting carried away with the wide range of available fonts and the romance of 35 stars. Did we also get caught up in the pizazz of such a meteoric event? Undoubtedly. When asked for his side of the story, Chinch gets a dreamy look in his little eyes, twitches his whiskers and squeaks thirty-five times.