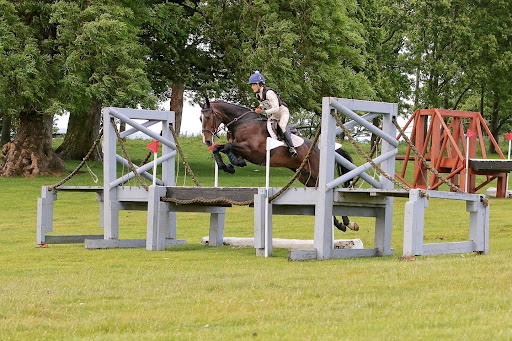 A 30 something English Literature graduate perpetually coated in horse poo and mud, Diana has a penchant for spicy food and an (un)healthy obsession with all things equine. Based in a particularly wild and remote part of England (imagine Outlander but with fewer kilts/flame haired Scotchmen), she spends most of her time trying to keep herself and various other four legged friends alive. The rest of her time is spent dreaming of riding for her country (sorry Team GB; standards might have to slip a tad before that happens), although a crack at a 5* on her beloved steed Zara will do …after all, what is life without dreams? Never one to shy away from adventure, Diana has driven the length and breadth of New Zealand, hiked through the Annapurna mountain range, and is currently considering a cycling tour of the Italian Lakes. Now she just needs to master riding a bike…

It was a day of mixed fortunes for Northumberland’s infamous eventing dynasty, The Tatham family, at the annual Ratcheugh One Day Event. Eldest daughter Helena’s seemingly endless patience with her notoriously tricky horse, Boston Teabag, finally paid off, and she took the win in the Novice class. Sadly, the same cannot be said for her sister, Pinchie, who finally admitted defeat with her ‘talented but obnoxious’ homebred mare, Mystic Meg.

Meanwhile, the head of the family, Mary, competing in the BE100 class, was trying a new tactic with her undeniably talented but fizzy (borderline psychotic – in the riders’ own words!) young thoroughbred, Maharaja Sunrise. ‘I have been trying her on a new calming supplement, and although it meant her Dressage was much improved, I think I need to tweak the dose as the jumping phases suffered.’ We would tend to agree; the stag like chestnut mare is normally well within the time in the cross country, and rarely ever touches the coloured poles, but this was not the case this weekend.

Indeed, a relaxed dressage test may have scored the pair a PB (for both horse and rider) of 11.6, leaving them a long way ahead of the rest of the field at this stage, but the mare then trotted around the show jumping, smashing through the first and second fence as if they weren’t there, and amassing enough time penalties to bring her within 2.2 penalties of second placed Amelia Hetherington, on her debut at this level. Amelia was ecstatic to be back in the running for the much coveted Northumberland Cup, and the accompanying £20 voucher for local feed store Thorpe and Sons, and set off cross country like the devil was behind her and the Thomas family’s Reiver’s Lad.

Sadly, they came to grief at the penultimate brush fence; the Jumbo sired gelding seemed to ignore Amelia’s aids altogether, and even her enthusiastic shout of ‘HUP,’ did nothing to encourage the horse to take off. As the talented young rider sailed over the brush without him, ‘Dan,’ as he is known at home, wandered off to munch on the carrots in the nearby BE80 fence, ruining the artistic display of Janine Kendal, wife of course designer Tim.

Mary Tatham did manage to coax Maharaja Sunrise over all 25 jumping efforts on Tim’s course, but the mare’s energy finally ran out as they approached the finish line, and she walked the final few metres home, coming home 3 times over the 5.20 mins optimum time and eliminating them from the competition.

Instead, it was Michael Washington who took top honours, aboard Georgie Hadfield-Tilly’s coloured stallion, Rupert the Bear. This was the strikingly marked 6 year old’s third run at this level, and although a score of 47.5 left them trailing in 23rd place after dressage, a fast and clear run cross country saw them climb to the top of the leader board.

This was Tim’s final year of designing the course here at Ratcheugh, and he made sure that he left a lasting legacy, with no shortage of tricky lines and tough questions for riders in all three classes and indeed many riders returned ashen faced after walking the cross country courses.

Linda-May Cooper, eventual runner up in the Novice class, was not the only rider to be found throwing up into a wheely bin before her round, although her nerves proved unnecessary as she stormed home 3 seconds within the time allowed, aboard her own and husband Jack’s Diamant de Semilly mare, Crumpet III. This was only the horse’s second run at this level, and Linda-May, who runs a small schooling and breaking yard nearby, is full of hope for their future together. ‘I bought her as a three year old at the Gorsebridge sales, with the money my grandmother left me,’ the rider explained. ‘I really believe she could be the horse to take me back to 5*,’ she continued, with reference to her ride round the much hallowed turf of Badminton almost 15 years ago on her young rider horse, Yorkie. A bad fall and various personal circumstances have sent this gritty rider down a very different career path to that which she imagined, and eventing has, until recently, had to take a back seat. Perhaps this horse will allow the dreams of yesteryear to come to fruition for Linda-May, who admits she has never quite given up hope of riding at top level again.

Helena Tatham was certainly living the dream with her Novice victory. Boston Teabag has certainly tested the resolve of the full time music teacher – who events for fun during the summer holidays. ‘I have treated him as I would a challenging pupil at school, trying to understand the root of his issues and work with him rather than against him.’ This tactic has definitely paid off, and the horse showed no signs of stopping at any point on the 3000m course. Indeed, it took Helena 4 laps of the collecting ring at the end of their round before she finally managed to pull the striking dark bay gelding, of unknown breeding, up. Quite the turnaround for the horse who last year refused to leave the start box for a whole minute following the whistle, and even then only got so far as the third combination, a fairly innocuous rolltop to an inviting skinny under which apparently lay invisible demons which left the horse immobilised, and led to Helena raising her hand in defeat.

Following that particular disaster, she sent the horse to Pippa King for a winter, and she has also benefited from training with the Olympic legend, who lives a few miles down the road, and whose husband Andrew provided the commentary for the cross country. ‘Pippa really got under his skin, and I can’t believe we have gone from barely finishing a 90 to winning a Novice. I have no aspiration to go any further up the levels, which is just as well, as I do think that this is as far as I will be able to push ‘Berry,’ given how hard he has found it to overcome his issues thus far.’

Such is the draw of this popular Northern fixture which serves as the Badminton of the North for so many amateur riders in this area, and for whom completion here is the ultimate goal.

However, the event was not without a few dashed hopes, and the award for the most heart breaking story of the day certainly goes to Pinchie, Helena’s youngest sister, who dropped from Novice to BE100 earlier in the week, after elimination in the show jumping at Thornton Meadows three weeks earlier meant they failed to gain the necessary three MERs to progress up a level.

Putting this disappointment behind her, the plucky young rider proved her prowess in the dressage phase, posting an impressive 22.4 before wrestling her difficult chestnut mare around the show jumping with just the second part of the double down. Finally it seemed like her patience with Mystic Meg was going to pay off, and the pair made it two thirds of the way around the course without incident. A sticky moment at the Trakehner saw things beginning to unravel and after a run out at the Toyota Tiger Trap, their round came to a dramatic finish with ‘Misty’ refusing point blank to go over a straightforward Pheasant Feeder, leaving Pinchie on the floor after grinding to a halt when she represented to the fence for the third time before quickly dropping her shoulder in a deliberate and successful attempt to deposit her rider.

Speaking to Event Nation after the event, Pinchie said that ‘enough was enough. At 12 years old, she still has plenty of running left in her, and her ability is undeniable but given that she has yet to finish an event, I think I need to realise that eventing is not her cup of tea.’ Instead, the mare will be allowed to realise her dream of hunting through the winter months and pulling rude faces at passers-by whilst stuffing her face with grass throughout the summer.

Another rider heading home whose day did not go according to plan was Alex Huntingdon, who was making his affiliated debut at Ratcheugh this weekend in the BE100 class. Whipper-in for the local Border Hunt, Alex suffered an unlucky 20 penalties after braking issues saw him having to turn a circle on his Irish cob in front of the B element at fence 5. Still, the rider thoroughly enjoyed his day, praising the organisers for the smooth running of the event, and commenting on how friendly his fellow competitors were. Parked next to local legend Mark Ferguson, Alex had to ask to borrow a number bib, after realising he had left his own in his girlfriend’s car the day before. ‘Everyone has been so kind and helped me so much – I was so nervous coming here, but despite not finishing as well as we had hoped, I can’t wait to enter another BE event. I need to sort the bitting out – an Eggbut snaffle just isn’t enough once ‘Jackson’ gets going! He has never been so forward before: I usually have to kick him forwards, rather than hold him back!’ he laughed afterwards.

Another successful convert to our wonderful sport, Alex’s enthusiasm captures the addictive nature of eventing, and the reason why so many riders forgo the comparatively stressless life of the none equestrian community for a life of delight and despair with their equine counterparts. Even those riders who had a less than successful day have vowed to be back next year at the spring running of this event, starting another six months of mixed emotions and renewed ambition.

Indeed, shortly after rewilding Mystic Meg, Pinchie Tatham was seen boarding a flight to Ireland to find her next partner in crime, a horse that might finally see her rise to the lofty height of Novice Champion here at Ratcheugh, and have her name in lights on the front of the Northumberland Gazette, like her sister before her.