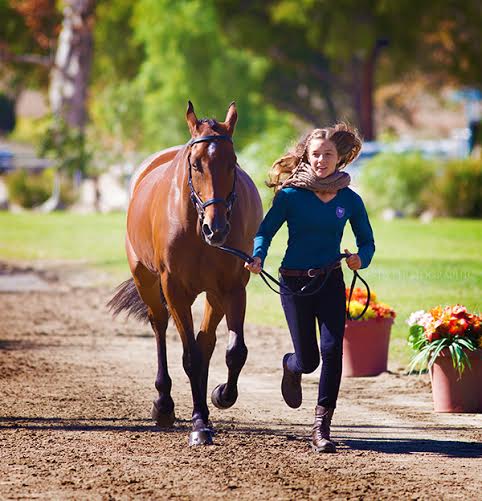 15-year-old Mia Farley has been on the ride of her life these past few years, most recently named to the Eventing 18 Training List for 2016, her third year on this list of talented young riders. Mia is not one to take things for granted, though, and looks forward to continuing her upward progress with her Irish mare, Fernhill Fine Diamond.

“I didn’t have (Fernhill Fine Diamond) at the time of the first training sessions last year,” Mia said. “So I was able to ride (Judy McSwain’s) Fleeceworks Cinco, who I really enjoyed. (Eventing 18 coach Leslie Law) really helped me, and he has also had a big impact on Fern and I this year.”

Fernhill Fine Diamond, a 7-year-old purchased earlier in 2015, has become Mia’s primary partner, culminating their first season together with a top 15 finish in a large CCI1* division at Galway Downs in October. They collected several top placings at the Preliminary level this year and also finished seventh in their first CCI1* together at Rebecca Farm in July.

“Leslie had told me that he hoped we would show some improvements with our leg yields and her dressage work after a clinic we did in August,” Mia said. “He was able to see us improving at Galway and was very pleased.”

As a member of the Eventing 18 squad, Mia has been appreciative of Leslie’s availability as a coach, even when he doesn’t live in the same area. “He is super supportive,” she explained. “Even though he only sees us a few times during the year, he always recommends that we email or call him with questions. He goes out of his way to help us.”

Mia hopes to continue building on Fern’s talent when Leslie returns to the West Coast in 2016. “Now that our dressage is beginning to improve, I’m hoping to do some more jumping this year,” she said. “Sometimes she can get a bit heavy, and the jumping lessons I’ve done with him before have helped.”

Mia trains with Ginnie Bryant on a regular basis and feels that her access to great training has really helped her and Fern’s relationship progress. Looking ahead to 2016, Mia has yet to nail down a final plan but would love to include Young Riders on that calendar.

“We’re thinking of either Young Riders or AECs,” she said. “I would love to also step up to Intermediate and conclude the season with the CCI2* at Galway. I think being named to the U18 list will really help me again this year with moving up and I feel very fortunate to have been named for 2016.”