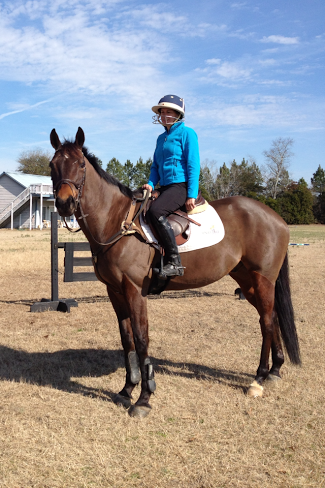 Kate Chadderton is back in the saddle!

Kate Chadderton recently suffered a concussion and a broken jaw, which has kept her out of the saddle for a few weeks. She sent us this photo, though, to let us know that she was officially back in the saddle and wired for safety thanks to “polo extraordinaire” Liv Stringer. We are glad to hear you are doing well, Kate!

Today is the last day to vote for the ESMA Awards! Eventing Nation has been nominated for two Equestrian Social Media Awards! Go vote for us in categories #14 and #15, Best Blog and Best Social Network. [ESMA Voting]

The annual Heritage Days Fork CIC2* and CIC3* are being held in Norwod, Nc. from April 2-6. This year’s competition theme is “Norwood To Normandy” and will feature several international officials, including Alain James, who has been tapped as a member of the ground jury for the World Equestrian Games. Don’t miss out on this spectacular event which features a breathtaking facility and top-class competition. [The Fork]

Horse Nation’s Carley Sparks recently interviewed George Morris. His answers may surprise you, if you are surprised by a lack of sarcasm and quick jokes. The interview is a sound look into George’s philosophies and opinions. Definitely worth a read. [6 Questions With George Morris]

Have you ever wondered how a horse’s genes affect their movement? Scientists at Texas A&M University recently conducted a study on the characteristics of movement and genetic mutation. [Gene Testing and Horse Movement]

The Moreton Horse Trials, scheduled to be held in the UK on March 1-2, have been cancelled due to severe weather. Rain prevented work from being performed on the cross country course, and the water-logged ground has many concerned that this only the first of many such cancellations for this year. [Moreton HT Cancelled]

Check out this Flashback Friday video of the 1984 Los Angeles Olympics.