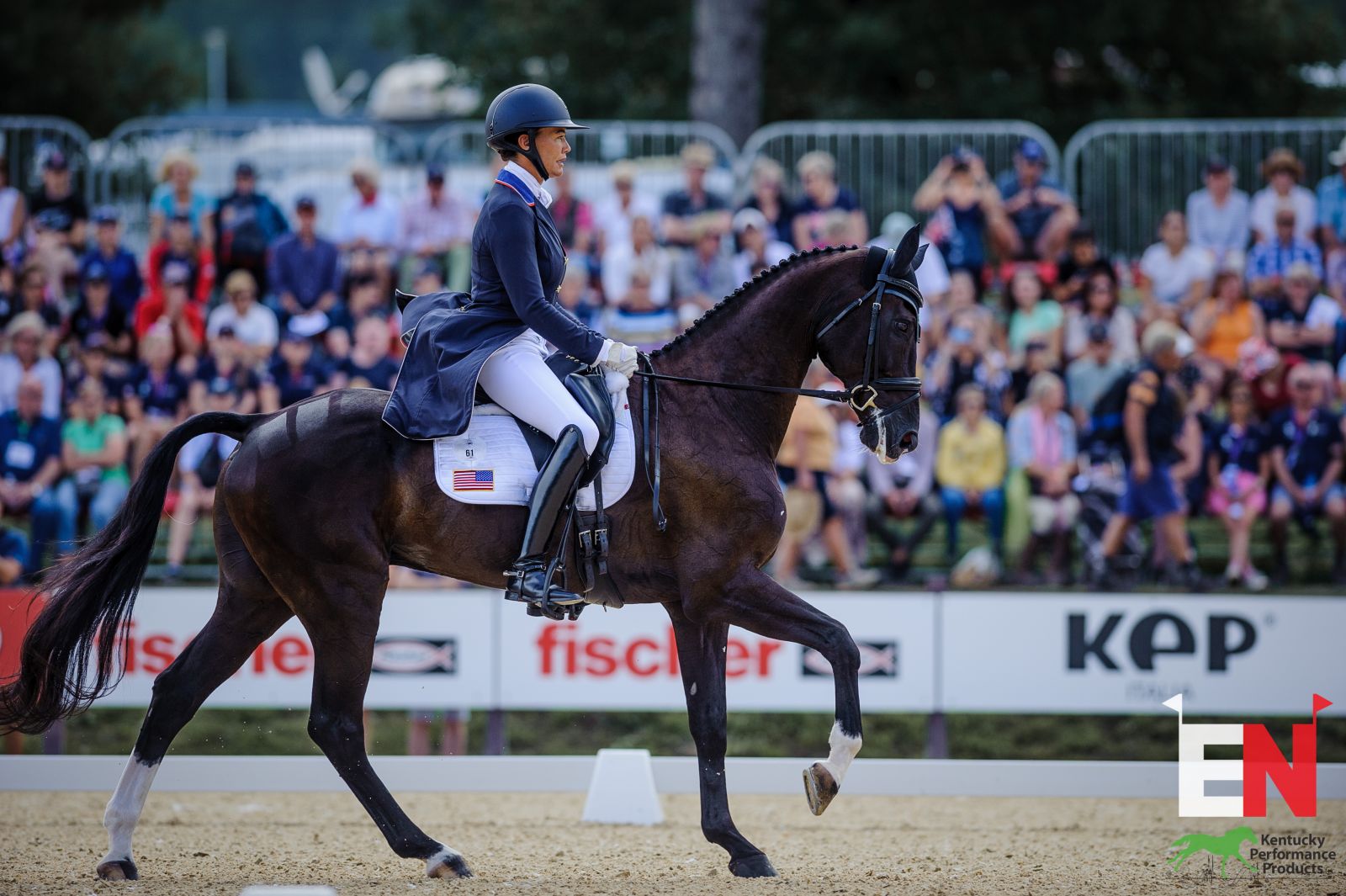 Tamie Smith and Mai Baum are the best of the Americans. Photo by Tilly Berendt.

A disappointing bobble in the first medium trot wasn’t the first impression Tamie was hoping for, but nothing could derail her steely determination. That combined with “Lexus’s” dreamy, correct way of going — and several nines in the canter work! — gave the pair a result of 24.

“I think he just tried a little bit too hard and you can’t fault him for that. He doesn’t have the best medium trot — I’m pretty sure that’s the best medium trot I had before I cantered, but I think he was pretty spot on everywhere else so I’m really proud of him,” she said. “I do feel like it was better than Badminton. And he’s in much better self carriage and relaxation — really most of it was all brilliant. Just unfortunate to have that one little mistake but you try to go for it, and you know, it’s a 24, so I’ll take it.” 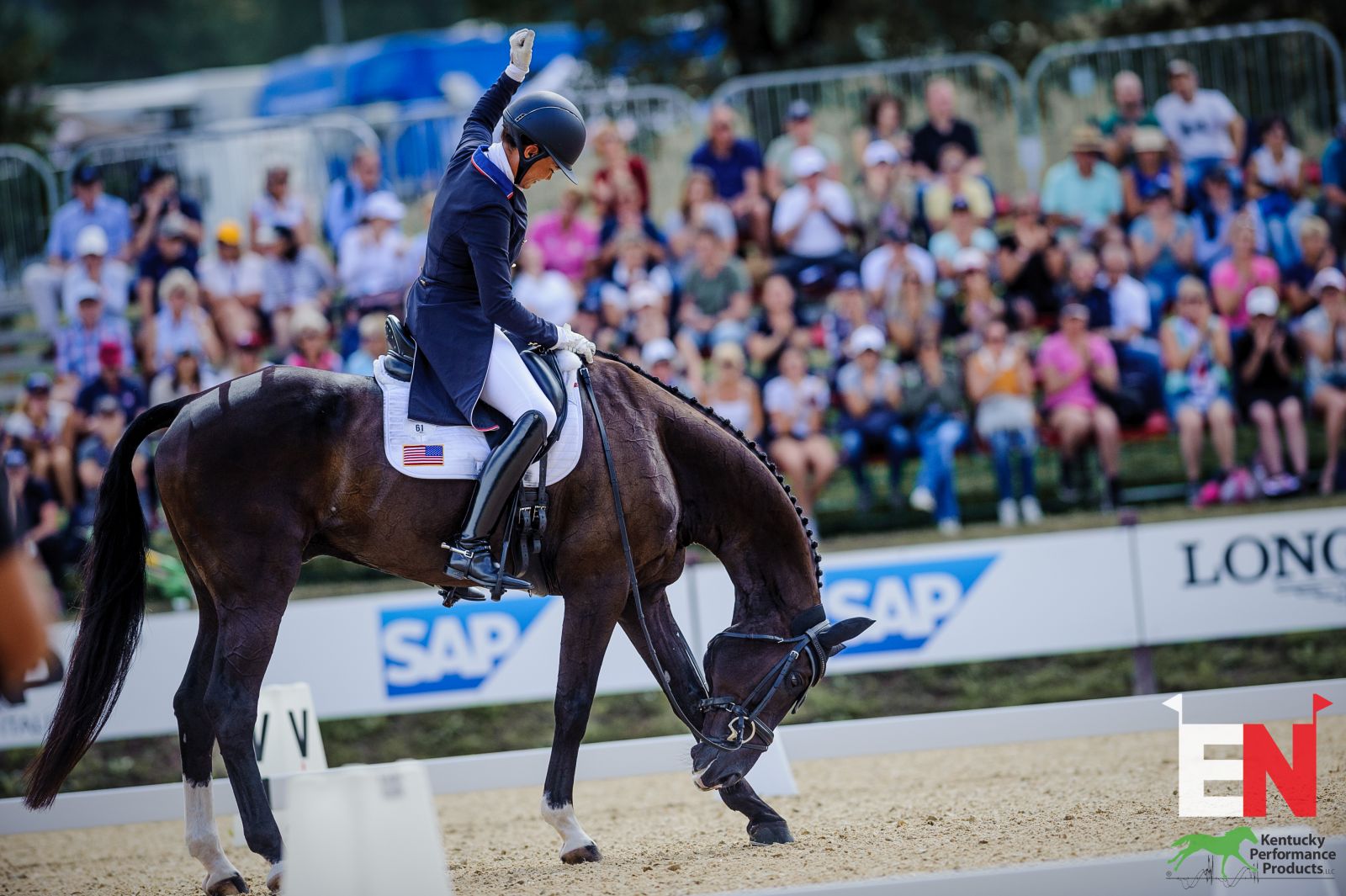 Mai Baum is right at home in the championship environment. Photo by Tilly Berendt.

Pratoni is the place for dreams to be realized for Tamie and the 16-year-old German Sport Horse (Loredano 2- Ramira, by Rike), who came tantalizingly close to a major championship appearance as traveling reserves for the U.S. last year in the 2020 Olympic Games.

“Going to Tokyo last year really gave me some experience just being there. So you try to categorize it and just another horse show, but it is a team competition — it’s the World Championships, so it feels awesome. It’s been a lifelong goal of mine to be here, and to be on that horse is extra special because I think he’s one of the best in the world,” Tamie said.

With final combination Boyd Martin and Tsetserleg TSF still yet to come, the U.S. is in silver medal position (77.5) at the lunch break only 6.4 points behind Great Britain. 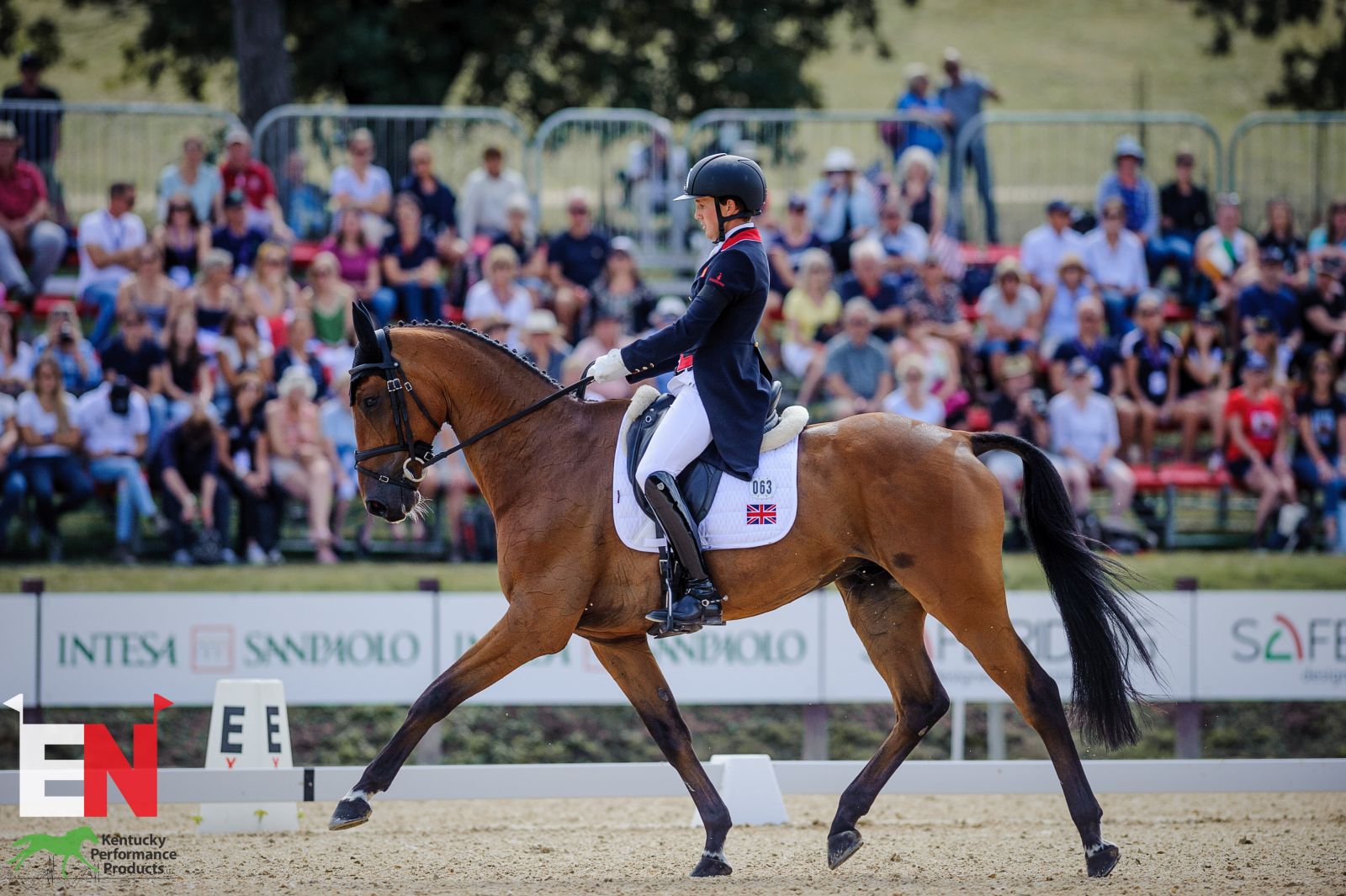 Britain’s Tom McEwen suffered a misstep similar to Tamie’s in the first medium trot, but earned marks back with his strong canter work to put a 25.6 on the board for tied fourth place, shared with New Zealand’s Monica Spencer and Artist. Partnered with the Pau CCI5* winner Toledo de Kerser, Tom was the third to go for Great Britain’s powerhouse squad, putting them in gold medal position on 71.1 points — a new world record for lowest World Championship team score after dressage, overtaking Germany who held the previous record of 73.4 in Tryon.

“I would say overall Badminton would have been a higher quality, a better frame, probably been a little bit better rhythm, but I’m really pleased with him,” he said of the 15-year-old 15-year-old Selle Français gelding (Diamant de Semilly x Ariane du Prieure II, by Papillon Rouge), who he thinks was on more of a disadvantage having the first phase on footing. “It’s always been the case that he’s — for whatever reason, he loves the grass and on the surface he can just every now and again go a little bit like this. So yeah, looking forward to next two phases on grass and with him,” 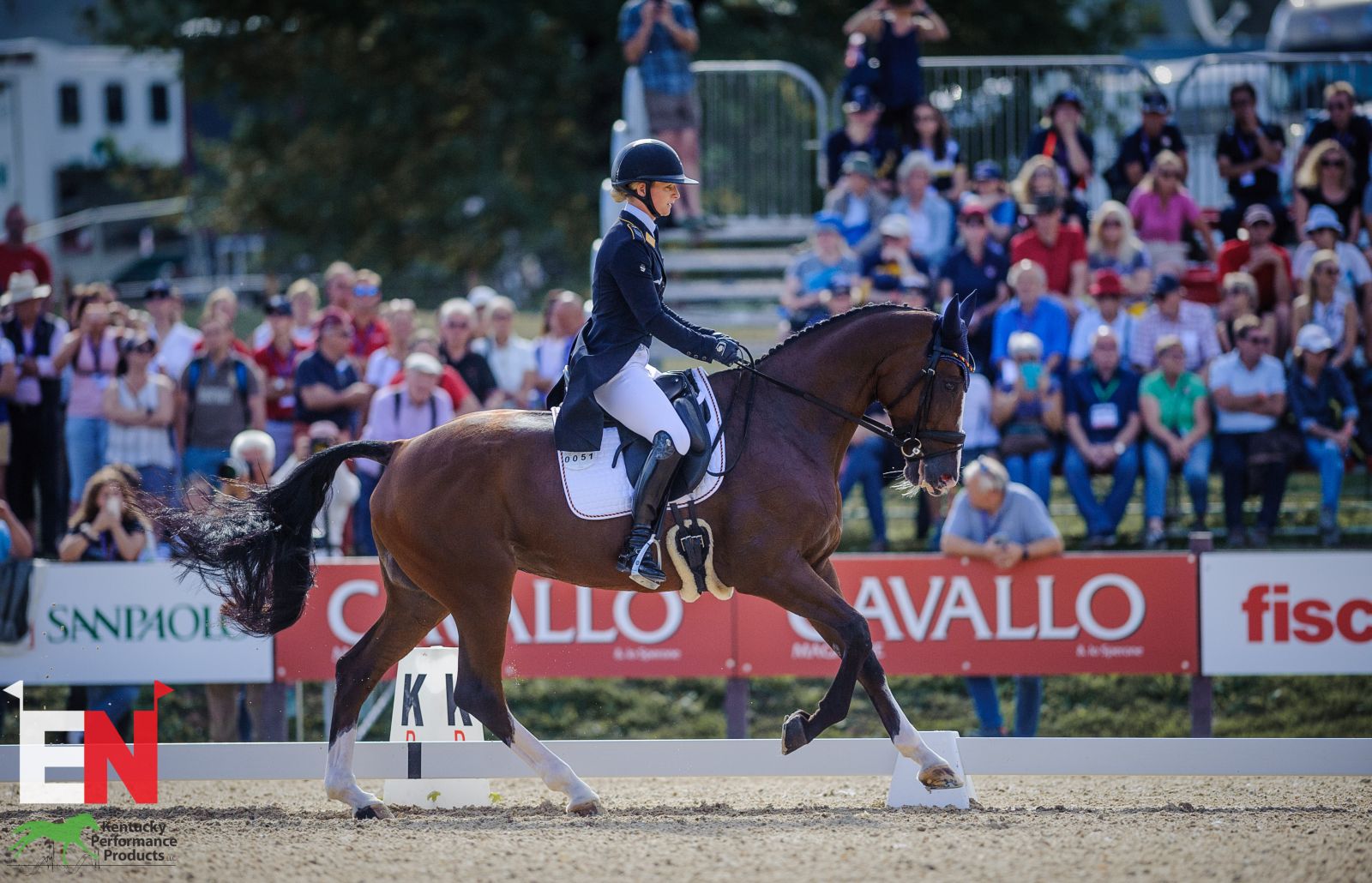 Reigning Olympic gold medalist Julia Krajewski is in striking distance of an individual medal as the best of the Germans to come forward so far. Her Tokyo partner Amande de b’Neville, an 11-year-old Dutch Riding Horse mare (Sir Shutterfly – Zaramba, by BMC Kigali), owned by Svobodova Adela, looked every bit the professional, and Julia said, it was just the test she intended to have.

“I said I want to be around 25 and we managed that,” she said, and they are just a hair north of that on a penalty score of 26.

“It’s not her favorite thing to go in the white rails. It’s a very long test. Lots of twists and turns but yeah, she was she really kept herself together. she I think she did amazing extended trot extended canter. I think the flying changes were good. The halts were quite good for her.”

Competitors from all nationalities lined the arena for the Tokyo legend, but Julia is too cool a customer to be affected by outside pressures. “To be honest, actually [the pressure is] even less because I mean, before last year, people were actually waiting for me to do not good and you always had to prove yourself. And now, well, I have that in the back and I’m trying to enjoy it a bit more. But still, of course there’s pressure and you want to do well, but heaviest thing is off my shoulders since last year, to be honest,” she said. 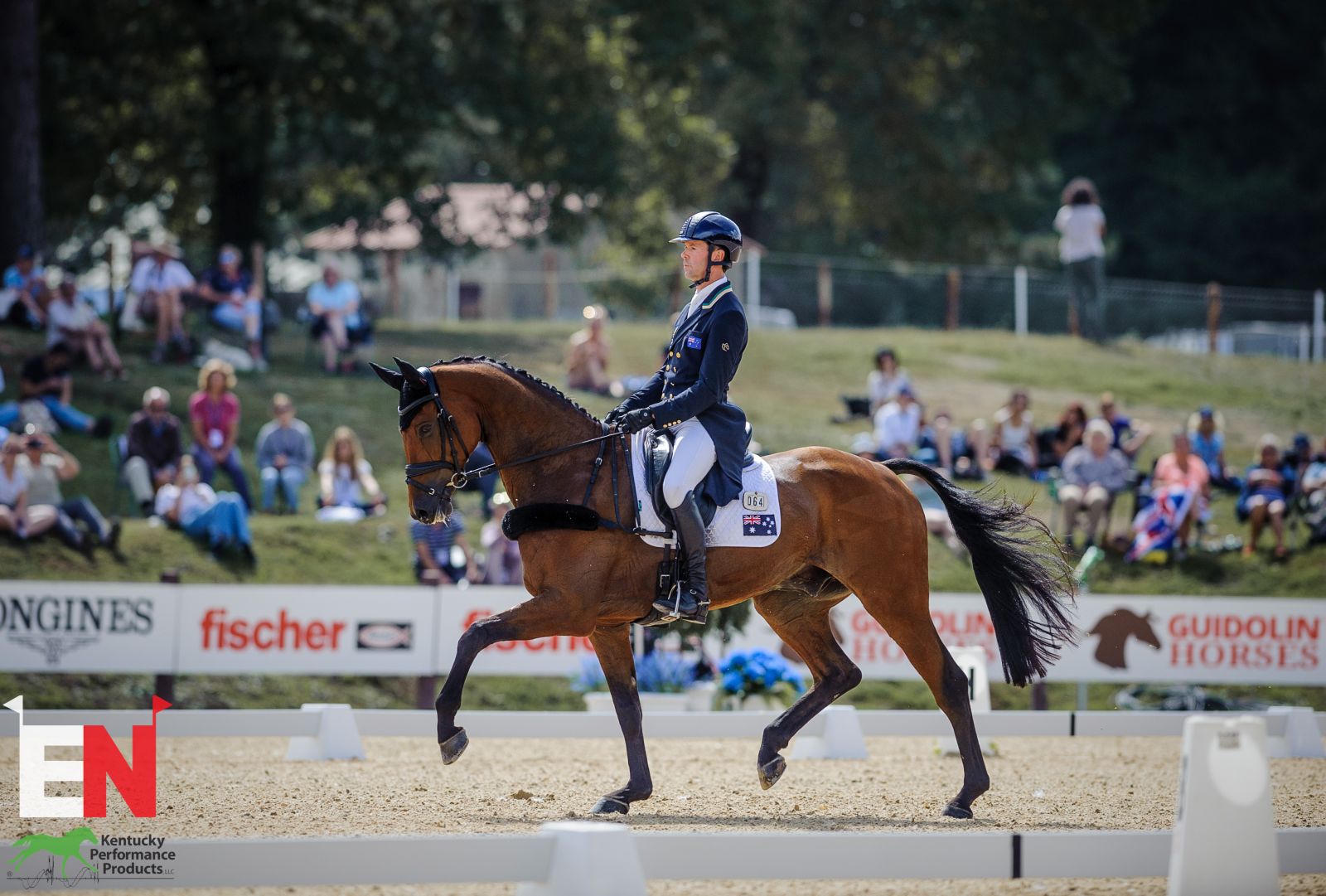 “He went in then he grew a little bit, which worked for me,” Kevin said. I haven’t had a clean change from right to left today. So he saved them for in there — that it was good.” 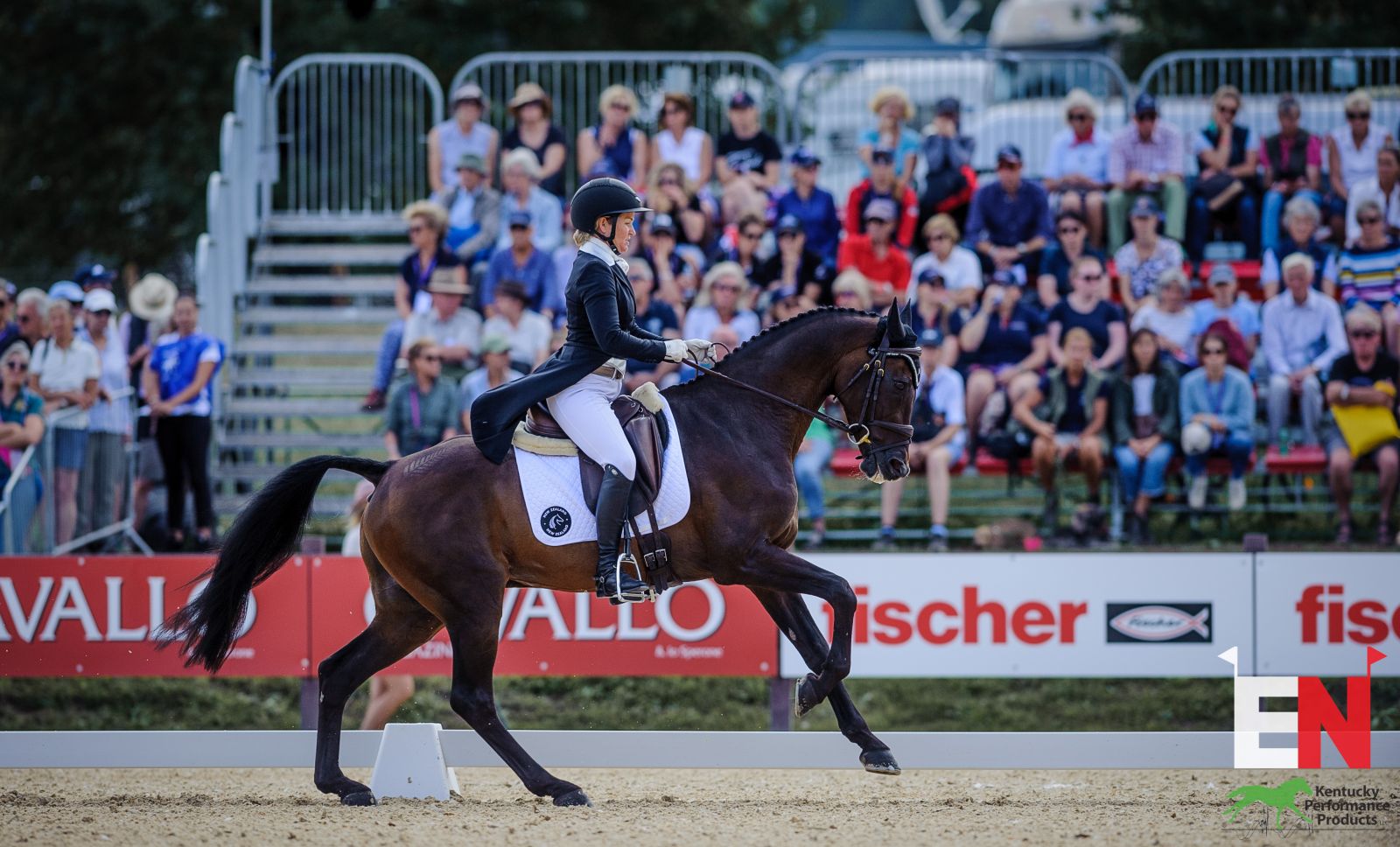 Jonelle Price goes for a championship PB in the first phase with McClaren. Photo by Tilly Berendt.

New Zealand’s Jonelle Price delivered her best ever Championship dressage test (26.1) with McClaren for eighth place as it stands.

“It’s crazy to think that at the age of 15, I’m just getting him where I want him. With how his life journey has been, you know, he’s been a frustrating horse because I’ve felt like I’ve made progress but not been able to reflect it in the marks. And as I walked out, I really didn’t know if I was on 31 for eighth time this year, but it wasn’t until I saw the board I was able to breathe a sigh [of relief],” Jonelle said of David and Katherine Thomson’s Holsteiner (Clarimo x Toni 1, by Landjunge). “He’s a cheeky little bugger, and his body has probably developed in a less than ideal way, so trotting a straight line is quite difficult. Some things that other horses have naturally from from day one, he hasn’t had.” 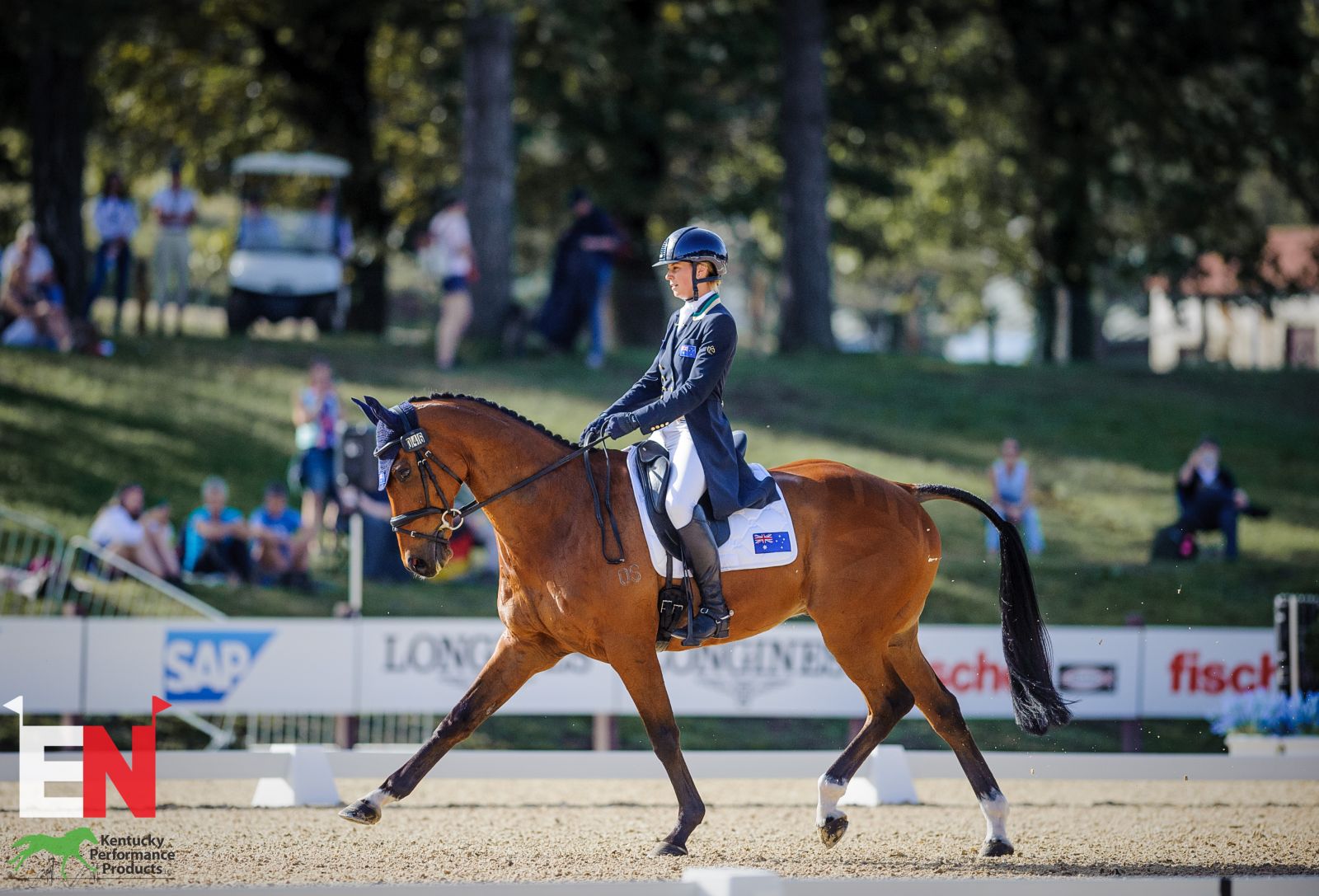 The last of the morning session to sneak into the top ten is ex-racehorse Bold Venture, piloted by Championship debutant Shenae Lowings. The Aussie rider, who is competing as an individual here in Pratoni, earned a 26.3.

“He’s pretty consistent in this phase. I had a few little blips in the first movement, but got ourselves back together and he executed the rest of the test really well, so I’m really happy with him. He’s not a normal Thoroughbred, he is a bit of a warmblood when it comes to dressage. You’ve got to kick him along a bit. He definitely could be affected by atmosphere, but he manages to block it out. And then as soon as the job’s done, he’s like ‘I’m done!’ and he realizes everyone’s around,” Shenae said.

We look forward to many potential game changers to come forward in our final afternoon session, including Michael Jung and fischerChipmunk FRH, Boyd Martin and Tseterleg, and more. Keep it locked here.