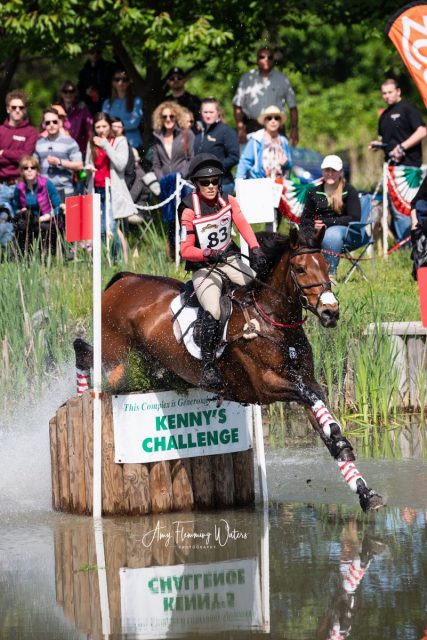 Capt. Mark Phillips’ CCI4*-L cross country course unseated eventing veterans and paved the way for new faces to take over the leaderboard. By day’s end, Fylicia Barr and Galloway Sunrise emerged as the front runners for this event’s premier division.

Fylicia and Shannon Barr’s 10-year-old American Warmblood mare have come along way since “Sunny” was only a feral horse she found on Craigslist for $500, but today they sailed around the track, coming home inside the time to lead the class on a score of 34.4.

“She is usually pretty fast and clear — that’s usually where she shines, so I was hoping,” Fylicia said. “I came in and I looked at my watch and saw we were clear and I was just really happy to finish the day on our dressage score. It definitely wasn’t easy with her in the beginning — she mad us work pretty hard for it, but I learned a lot from her, and here we are now.” 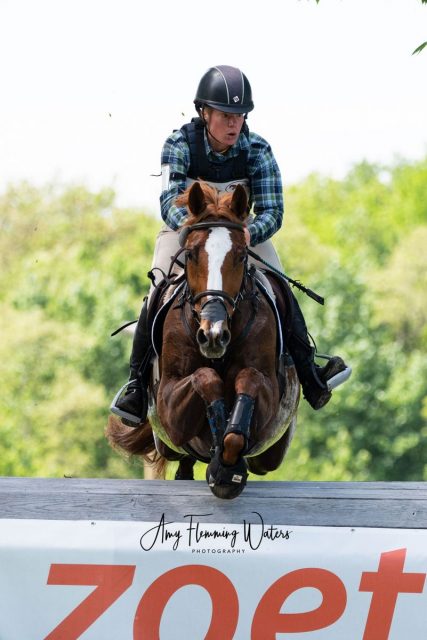 Making her first appearance at this level, Arden Wildasin takes the reins on second place with Il Vici, a 15-year-old Thoroughbred (Galileo x Ladyeri, by Salieri), who is owned by Arden and Sarah Wildasin.

“This was my first time ever doing a CCI4* Long. He’s a fantastic horse. Throughout the years we’ve had great experiences, and today was one of our days of going out there and doing jump after jump. It was one of the best rides — I knew, I had this land to gallop in, and I was just going to cherish just jumping through the double corners because I thought, ‘If this goes well, I’m good!'”

This pair had the fastest round of the bunch — a full 30 seconds inside the time. “I went through the finish flags and looked down at my clock and said, ‘I didn’t realize I was going that fast!’ Because it didn’t feel fast. It felt smooth and it felt like he was listening to all the cues and we were just collecting jumps around the course,” she said. 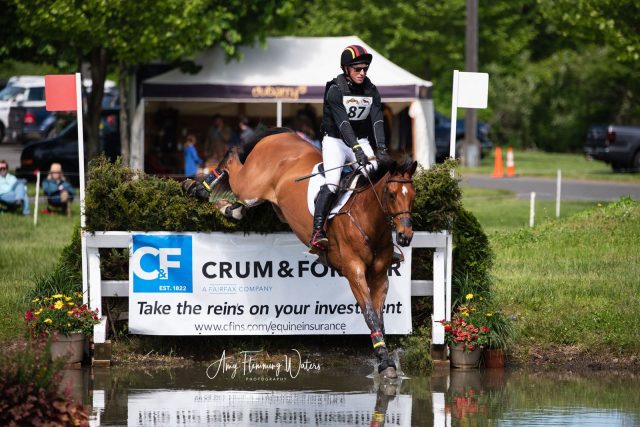 Doug Payne’s up-and-coming string came to shine this weekend at Jersey Fresh with Quantum Leap leading the way in third place of the four-star long. The 8-year-old RPSI (Quite Capitol x Report to Sloopy, by Corporate Report) owned by Doug and his wife Jessica, was bred in the U.S. by Elizabeth Callahan and has been beautifully produced by Doug since the beginning. Today he added just 4.4 time penalties for a current score of 40.1.

Looking down the leaderboard, Meghan O’Donohue and Palm Crescent sit fourth on a score of 40.8 after finishing clear just one second over the time. Jacob Fletcher and Van Gough dropped to fifth after picking up 12 time penalties for a two-day score of 45. Caroline Martin and Danger Mouse had 17.6 time penalties for sixth place (53.90).

Six of the 16 starters finished clean for a 37.5% clear jumping rate. Of those only two, Fylicia and Arden, managed to do it inside the time. The most influential element on course was the Jersey Shore water which saw one horse fall, one rider fall, two stops and a missed flag. At 8c, the final, skinny element in the water, Hannah Sue Burnett popped off Lukeswell. Allison Springer had at stop at this fence with both her rides, Sapphire Blue B and Business Ben. Nilson Moreira da Silva and Magnum’s Martini added 15 penalties here for missing the flag. Phillip Dutton and his horse Fernhill Singapore had a horse fall at the Jersey Shore, fence 26, an angled brush. Phillip has commented that Singapore is suspected of having a “wind issue” and will is being thoroughly evaluated. Otherwise, there are no injuries reported.

Issues also popped up elsewhere in the course. Overnight leaders Emily Beshear and Olney Uncle Sam had a heartbreaking runout at 18b, a corner by the back water. They’re now 7th on a score of 62.1. Boyd Martin and Contestor as well as Clayton Fredericks and FE Stormtrooper also fell victim to this fence. Clayton elected to retire here after his refusal.

Anna Loschiavo and Spartacus Q had a runout at fence 15, a corner in the back field. Nilson also had a stop with his other horse, Cash, at 11a, a table, in the front field. 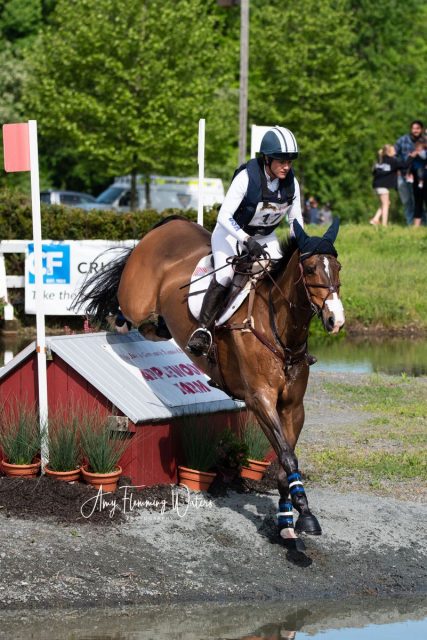 Lynn Symansky delivered two double clear performances around the Jersey Fresh CCI3*-L cross country course to kept hold of her lead in the CCI3*-L division aboard RF Cool Play and to move into 6th with SpectraVET Tempranillo.

RF Cool Play, a 10-year-old German Sport Horse (Condors Champion x Roxana, by Radscha) owned by The Donner Syndicate, motored around Morgan Rowsell’s track eight seconds inside the time to remain on his dressage score of 27.3.

“[Coolio] came to do his Pan Am qualifier. He’s done this level before, so today felt super easy for him, as it should,” she said. Jersey Fresh is one of the final qualifiers for the Pan American Games, which will take place Aug. 1-4 in Lima, Peru. Click here to view the full list of qualifiers.

As far as team selection, Lynn plans to give it her best effort, but she’s keeping the horse in mind. “Really, it’s the only thing everyone has in common — that they all applied to go to the Pan Am Games. It’s something to check off a list and then keep going with what your own plans. If your plan is just to make teams, then at the end of the day you loose the big picture,” she said. “I did it for the horse’s overall education and fitness as well because it was an easier run than he would normally do, but he got a late start to the year.”

Stablemate SpectraVET Tempranillo, an 8-year-old KWPN owned by Lynn, finished bang on the optimum time to carry 34.9 points into the final phase. 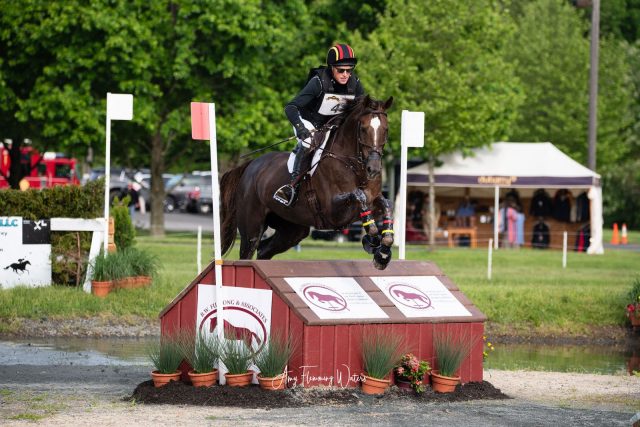 Less than a rail behind are Doug Payne and Starr Witness. The 8-year-old Dutch mare (Chello II x Carmen, by Veneur) Doug owns with Laurie McRee and Catherine Winter, was one of the first out of the startbox today, adding nothing to her dressage score of 30.1.

Like Lynn, Doug also finished both his horses clear inside the time. Stephen Blauner’s Cascor is fourth on a score of 33.

Will Faudree and Caeleste moved from fifth to third after a double clear effort. The 9-year-old Holsteiner mare (Contender X Happygolucky, by Lucky Lionell) owned by Jennifer Mosing and Sterling Silver Stables had the fastest round of the division to continue on a score of 31.7.

We saw two falls in the CCI3*-L: Alex Baugh fell from Mr. Candyman at fence 18, the open rails, and Phillip Dutton had a horse fall with Fernhill Pick Pocket at the corner at fence 20. Both horses and riders are OK. Jacob Fletcher also had an early end to his weekend with Mischief Managed after jumping the wrong table at fence 12, for which he received a technical elimination.

With perfect weather and good going, we saw quite a few speedy founds in this group. Thirteen of the 17 starters jumped clean with 10 of those also coming home inside the time.

Thank you to Amy Flemming for the gorgeous photos you’ve seen this weekend on EN. Pack your rain gear for tomorrow, we may be going swimming at the final horse inspection! 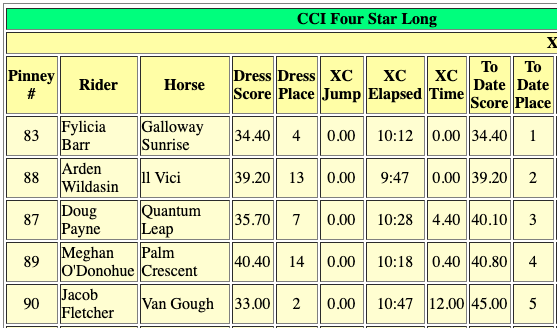 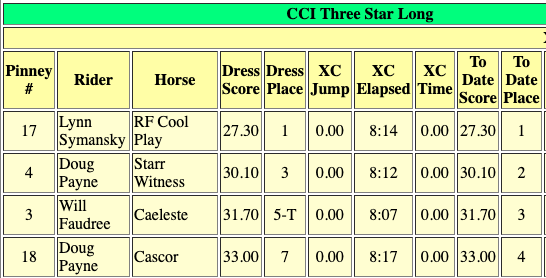