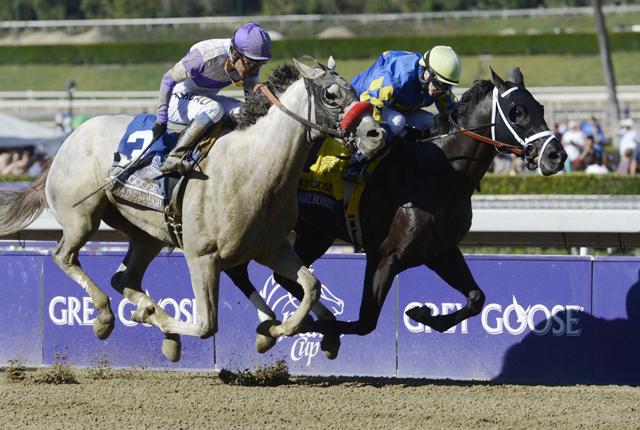 Rosie and Shanghai Bobby (inside) fend off Corey Nakatani and He's Had Enough in the 2012 Breeders' Cup Juvenile. Photo courtesy of Breeders' Cup Ltd.

Rosie Napravnik has established herself as one of the top-ranked North American jockeys since the start of her successful career in 2005. Currently, she is the highest ranked female jockey in North America and has surpassed the total wins and earnings record previously held by Julie Krone. She became the first female jockey to win the Kentucky Oaks (in 2012 with Believe You Can) and the second to win a Breeders’ Cup Race (the 2012 Juvenile aboard Shanghai Bobby).

Last week, the New Vocations adoption agency announced that Rosie will be the guest speaker at their annual Thoroughbreds For All event, held in conjunction with Rolex in Lexington. EN recently had the chance to get to know Rosie a bit better, so without further ado, here are some of her thoughts on her career and OTTBs. Many thanks to Rosie for taking the time to talk with us, and thank you for reading.

EN: We know how close the Thoroughbred industry is to your heart. Can you tell us a bit about how involved you have been with second careers for Thoroughbreds coming off the track?

RN: Late in 2006, I started breezing a beautiful grey horse at Laurel Park. The first time I got on him, I had fallen in love with him before I even made it down the horse path to the track. Over the next two years, I raced him seven times, winning twice. When the horse was claimed around to other tracks and at the lowest level, I reached out to the new owners letting them know that when he was finished racing I would like to retire him. And that’s just what happened after he ran his last race. He came to me in 2008 when he was 7 years old. He was lame when he arrived, but without serious injury.

After a few months off, my mother started to re-school the newly named Sugar in dressage and jumping. Since then, he has been to multiple shows, including combined training events and has also fox hunted! Currently Sugar is working as the stable lead pony for Mike Maker’s stable, overseen by my husband Joe Sharp, who is Mike’s assistant. With the appreciation for my own OTTB and the constant need for outlets for horses off the racetrack, I have been actively supporting many racehorse retirement organizations. I am a board member of the Old Friends Racehorse Retirement and have made many donations to other organizations as well. I will be doing a live demo with my horse Sugar at the Thoroughbreds For All event presented this spring by New Vocations. 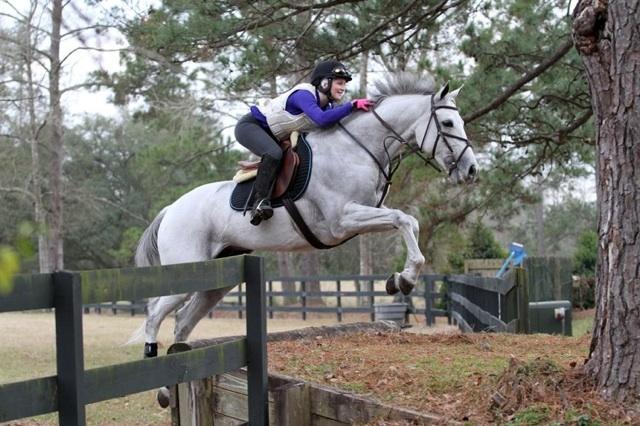 EN: Can you elaborate on your plans for Sugar?

RN: My plan when I took Sugar was for him to be my “fun horse.” He is the first and only horse I’ve owned as an adult, and all I wanted to do was spoil him and have fun riding him. He has exceeded those expectations by far. I kept him at my mom’s farm in Maryland while I was riding on the East Coast, and being within an hour or so drive, I was able to ride him about once a month during the Delaware Park race meet. My Mom used him for some of her students and competed him a little bit herself.

I had always wondered if I could make him a lead pony because I wished he could be at the track so I could see him more often. So when Joe and I left the East Coast circuit, we took Sugar with us, and Joe trained him to be a lead pony. His dressage training came in handy teaching him how to steer with basically only your leg. So now Sugar travels with us wherever we go. I see him every day, and I also hop on him sometimes in the mornings when I’m finished breezing horses. When Joe and I have spare time, we’ve taken Sugar trail riding, jumping and fox hunting. Sugar is always up for anything and loves his job as well! So he is … my fun horse!

EN: You grew up around event horses and even did Pony Club. Do you think you would ever go back to an involvement with another sport?
RN: I loved eventing when I was a kid, and I miss it! I would love to be involved with retraining horses from the racetrack to do other things, including eventing. 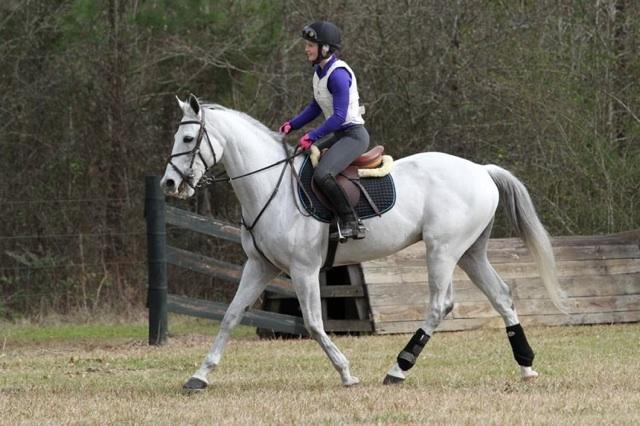 EN: As far as your racing career is concerned, what are your goals right now?

RN: My goals in racing are not exactly specific. I want to win as many of the BIG races as I can.

EN: What has been the biggest challenge to overcome as a female in a male-dominated sport?

RN: The biggest challenge Ive had to overcome as a female in a male dominated sport is … that very question. I’m asked it all the time! Once any female, in any sport or industry, establishes herself as an equal (equal in skill, talent, competitiveness, etc.) she will only have the same challenges as everybody else. 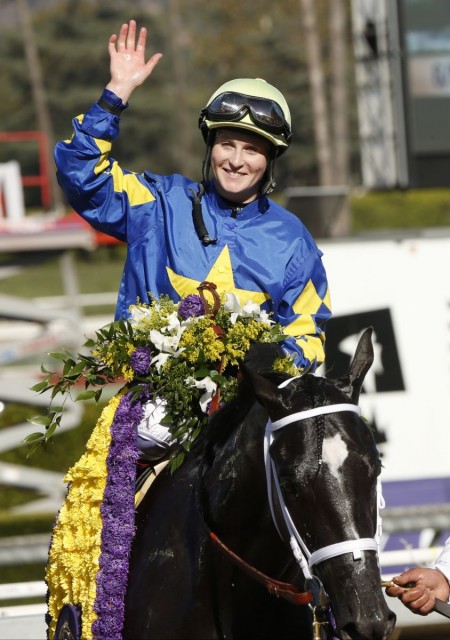 EN: What advice would you give to others who aspire to be in your position one day?

EN: What advice would you give to someone who is shopping for their next sporthorse prospect at the track?

RN: When shopping for a sport horse from the track, I would look for athleticism (not hard to find in a Thoroughbred), disposition, and soundness or fixable unsoundness. There are SO MANY horses on the track with SO MUCH potential for second careers! And they really love doing other things and love to please! Sugar has had two condylar fractures: one in front, one behind with three screws still remaining from surgery. I was aware of all of that back when I was racing him. Two years later when he finally came to be mine, he had even more issues, including an old suspensory and an ankle chip which has never been removed, but with three months tops in a field, he hasn’t had an unsound day since. He works every day and loves it and does whatever I ask of him, whether it be in an English saddle or a Western saddle, for work or pleasure.

EN: When it comes to second careers for racehorses, what do you feel could be improved on as far as the current way horses are transitioned into their new lifestyle?

RN: I’m not really sure how to answer this because I don’t have a lot of exposure to how people are retraining their OTTBs. I can however say that there are a LOT of people doing it, and I think THAT is great!

Here is some footage of Rosie and Sugar schooling at home. Be sure to check out New Vocations’ Thoroughbreds For All event on April 25. You can find more information here.