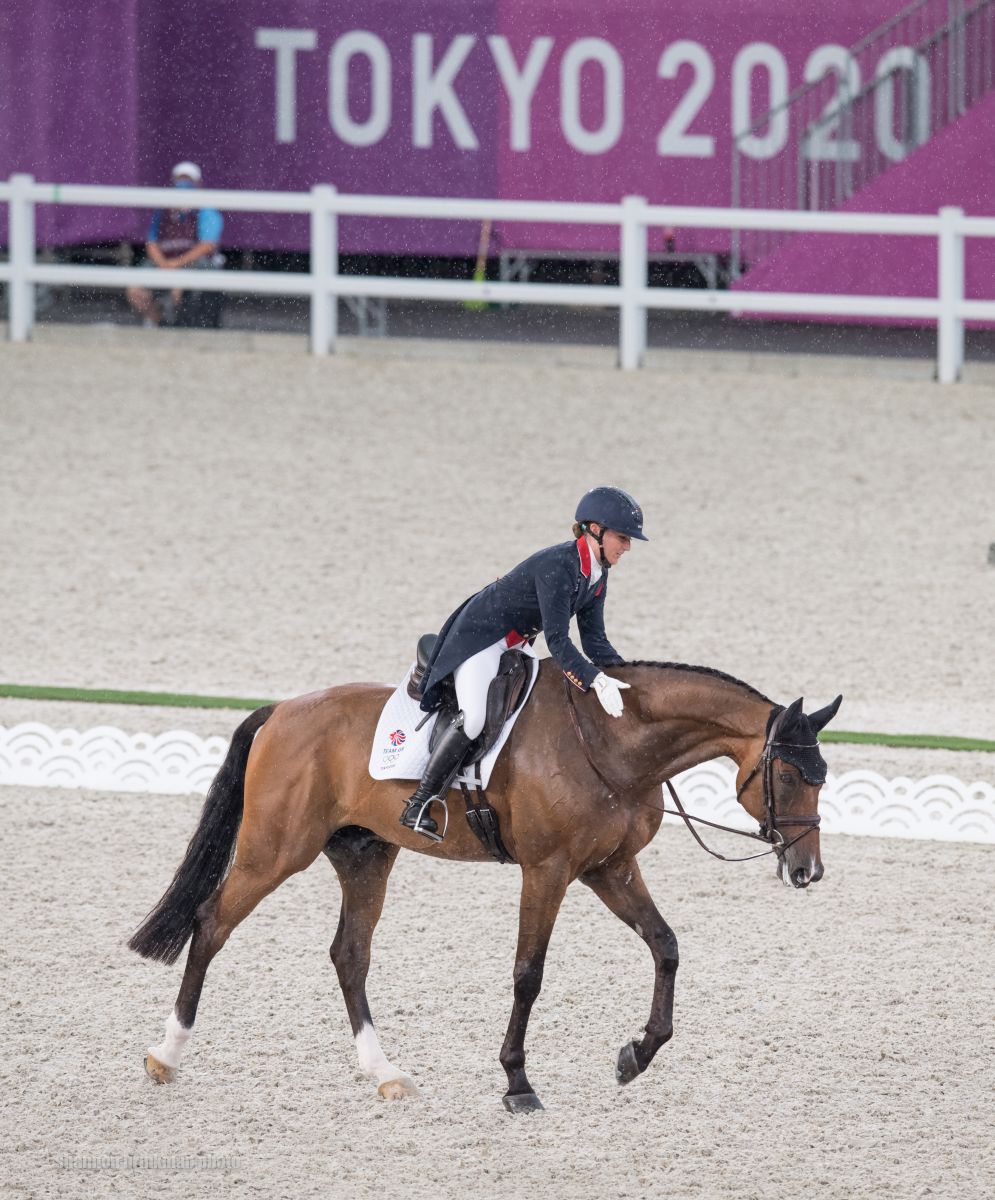 Great Britain – a team most who follow eventing closely would have picked as the one to beat in this Tokyo Olympic Games – has certainly done their job thus far, putting themselves into the top slot after two thirds of their riders have ridden their dressage tests. Laura Collett with London 52 (Landos – Vernante, by Quinar), a 12-year-old Holsteiner gelding owned by Keith Scott, Karen Bartlett and Laura, scored a 25.8 to be the best of the evening session here at Baji Equestrian Park – good enough for fourth place after day one. We got a bit of rain this evening, which truthfully helped things cool down a bit quicker (though Doug and Phillip have me feeling a bit like a priss for all their nonchalance about the heat and humidity here! Must be my California residence rubbing off).

But in truth, it wasn’t the best test London 52 has ever had, and Laura’s disappointment was palpable as she knows how competitive the tall, striking gelding can be. Laura’s journey with London 52 has been well-chronicled here on EN by Tilly Berendt, so we’re quite familiar with the obstacles this pair has overcome and the triumphs they’ve worked so hard to collect. It’s tough to come to the biggest stage in the sport and not throw down your absolute best, but Laura’s doing good to take it in stride – and truthfully, the score is nothing to turn the nose up at!

“I was a bit disappointed, because it wasn’t a test that he can do,” Laura reflected. “He just sat back a little bit and wasn’t really, you know, taking me like he can. He just didn’t want to show off like I know he can. I know some people will be pleased with 25 but on a horse like him it’s obviously disappointing.”

Laura said that London 52 has been feeling fresh and well within himself all week, but he came out this afternoon and didn’t quite have the sparkle that she’d expected to feel. When asked if perhaps a lack of crowd in the stadium to light him up may have been a factor, Laura mused that could have had something to do with his quietness. “He is a show off and when we went to Bicton and it was sort of the first time we’ve had proper crowds for for a bit, he definitely went in the arena and grew and loved it.”

“It’s not going to be a dressage competition, but obviously with the caliber of horses and riders that are here to win a gold medal, you’ve got to be right at the front end,” Laura continued. “So there’s a long way to go yet, but it’s not where we wanted to start.”

Great Britain, however, still holds gold medal position very early on on a collective team score of 49.4, 6.7 penalty points ahead of second placed Sweden. Japan currently holds bronze position on a cumulative score of 58.6. The United States currently sits in ninth place on a total score of 63.5. All teams have their third rotation of riders still to see, and we’ll see all of the anchor riders beginning with the second group of tomorrow morning’s session. 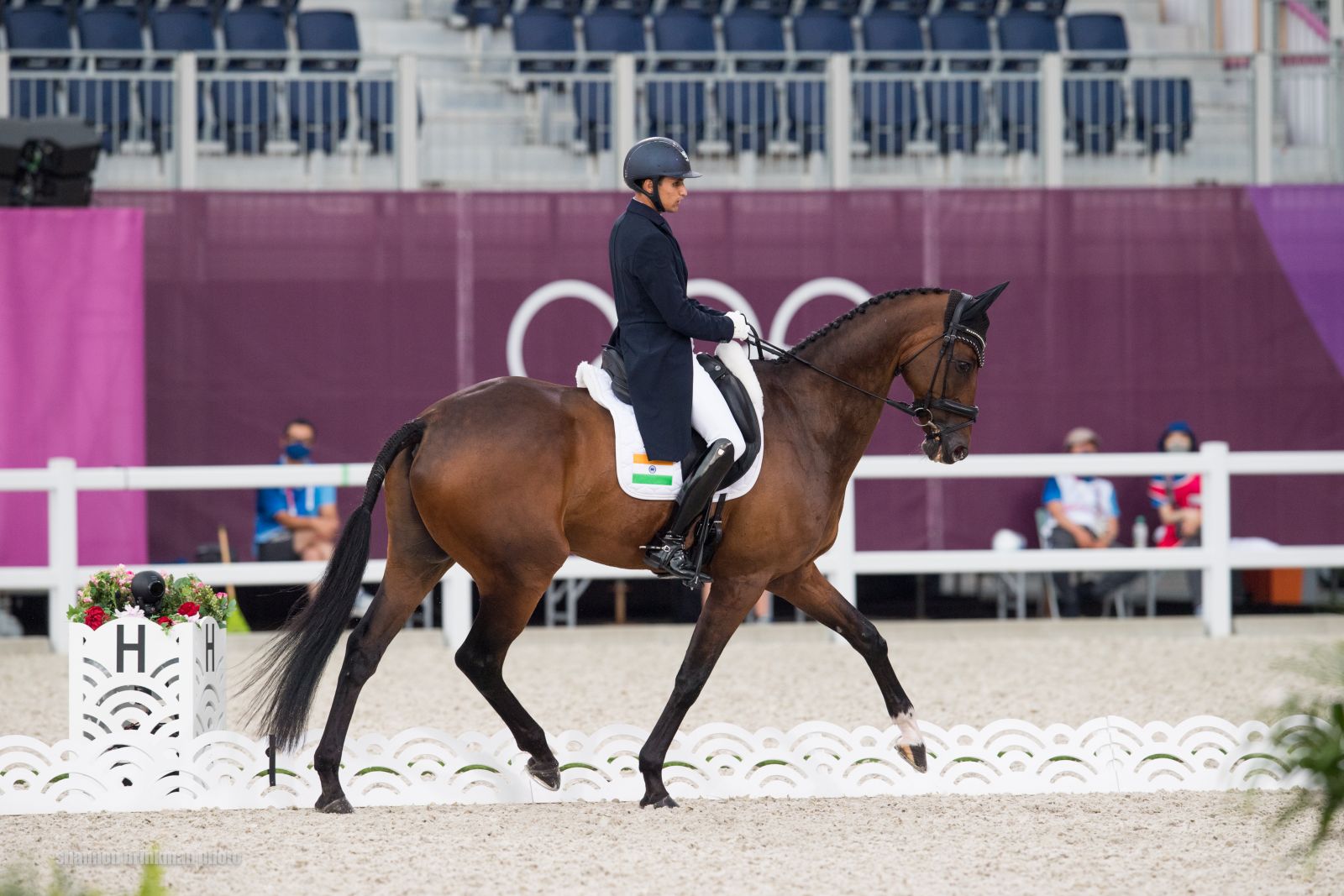 Fouaad Mirza, representing India, was the next best of the evening session, stepping up to the plate and the stiff challenge of being first to open the session and warm the judges back up. Riding the experienced Siegneur (who typically goes by Siegneur Medicott but had to drop the Medicott name for the Games), a 15-year-old Westphalian gelding by Seigneur d’Alleray xx owned by M/S Embassy Property Development PVT Ltd, Fouaad rode a class test that earned a 28.0 from the judges and moved him into seventh place.

Of course, though, Fouaad was quick to identify opportunities he missed in the ring, noting that the horse’s experience lends itself well to scoring better. “I think I could have done better, especially with that horse,” he said. “But, look, in the end he was very calm in there. He can get a little bit nervous and a bit hot, but maybe I just rode him a bit too quiet thinking he was going to be be a bit nervous in there and (that wasn’t) good enough for the better marks.” 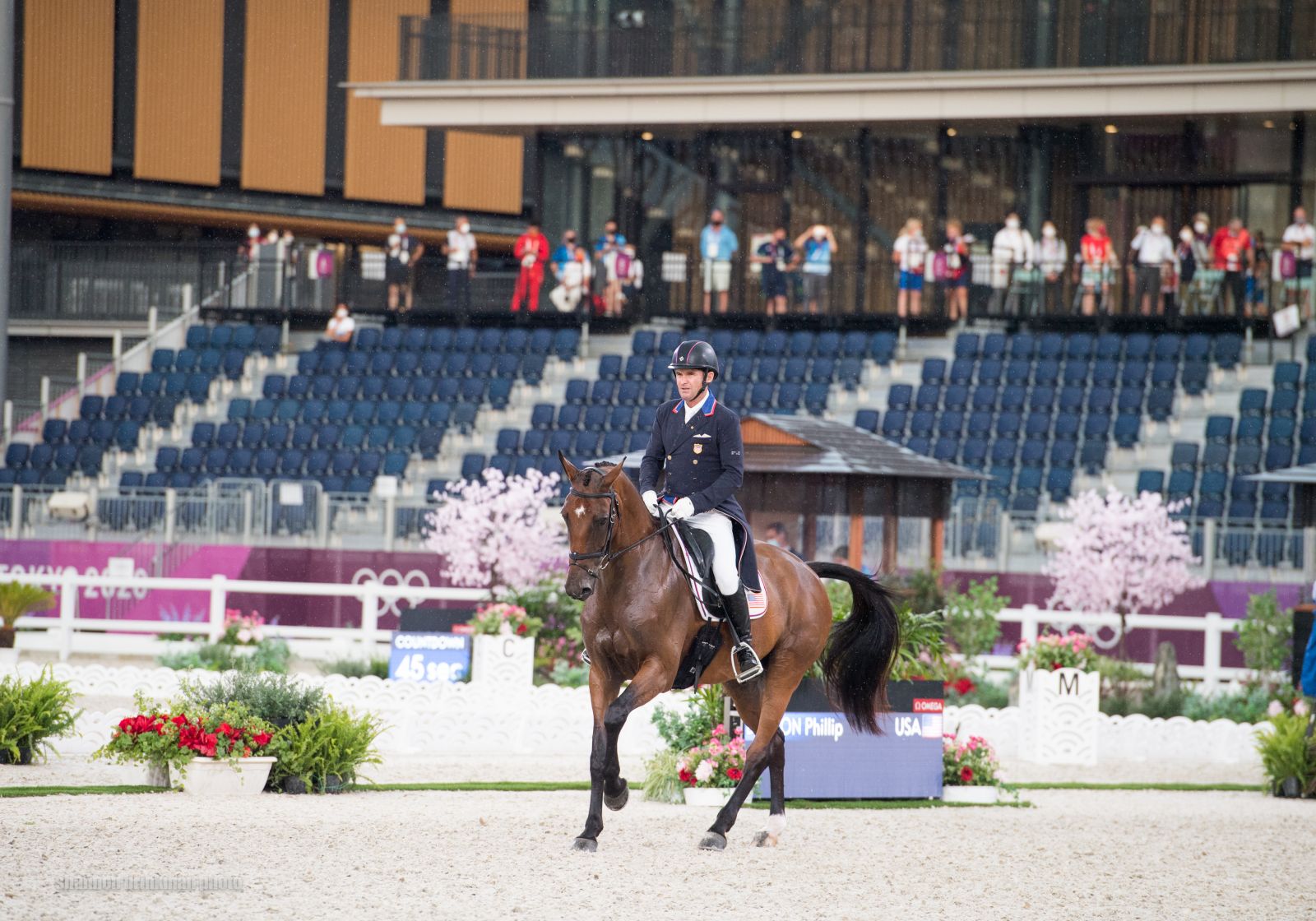 Phillip Dutton was the second rider out for the U.S., and though Tom Tierney, Ann Jones, Caroline Moran, Simon Roosevelt, and Suzanne Lacy’s Z didn’t quite earn the score he felt was deserved, he says he’s nonetheless pleased with the 13-year-old Zangersheide gelding’s efforts today. This pair scored a 30.5 to sit 11th after day one, scoring below their average at the level but above what EN data whiz Maggie Deatrick predicted. Z would be one you’d describe as a hotter horse – just the type Phillip tends to prefer – and he’s taken some producing and finessing to bring the best out of him. Those efforts have shown up in his recent work, notably in his changes which have gotten better as time has progressed.

“He’s getting more and more seasoned more and more trained,” Phillip said. “I was pretty proud of him actually because (you’re) under the lights and certainly there’s no crowd or anything like that but it’s still a different situation and a lot to look at and he was really in tune with me. I think the great thing about our sport and working with the horses is they keep improving. Especially if you can keep them competing all the time and sound, then they keep getting better and better and that’s the way he is. He’s better, much more seasoned for us than he was this time last year.”

Phillip took a moment to reflect on the progression of the sport that he’s been privy to, having contested six Olympics prior to this year. “I started off in Atlanta (in 1996) where you had to carry weight, and you had to be a minimum weight and roads and tracks and steeplechase and so it’s come a long way,” he said. “I really liked the dressage test. I think three in a team is certainly going to make it exciting, because you don’t have a drop score and I’ll be interested to see every team’s tactics and plan as they go out. If I had to say I’m not a fan of the three on the team. I think it was ideal having the four and then the drop score.”

We’ve got plenty more stories to share with you but for now I must go and catch a taxi back to my hotel – it’s about an hour’s drive from here to the hotel and an hour in the opposite direction from the hotel to the Sea Forest Cross Country course, so it’s quite a lot of time spent riding around here! But the wonderful thing about the Olympics is we have the opportunity to meet and get to know so many riders from so many unique and diverse backgrounds, and I truly can’t wait to share more of these little stories with you in the coming days.

We’ll kick back off tomorrow with the final three groups of riders, beginning at 8:30 a.m. JST / 7:30 p.m. EST. Stay tuned for much more from Tokyo! 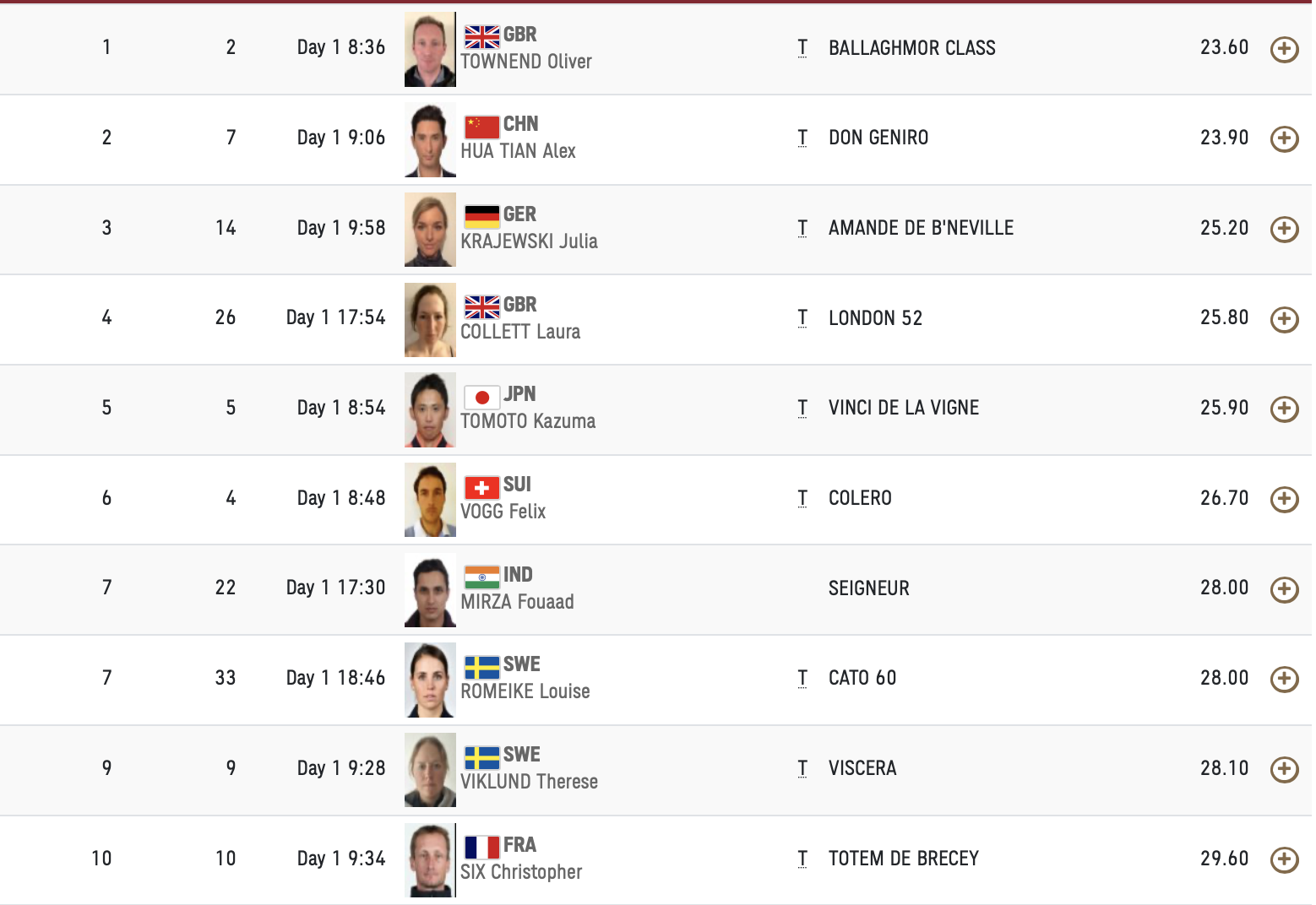