This week’s coverage is brought to you by Kentucky Performance Products. Collect your free stickers here!

I’ve said it (more than) once and I’ll say it again: it could not have been a more beautiful weekend at Millbrook Horse Trials for the event’s 20th anniversary.

While there was a lot on everyone’s minds over the weekend, one overarching theme of the past few days has been how special an event this is for many of the competitors. In part, it’s the FEI-like feel of the event thanks to the traditional format in which show jumping comes as the third phase and the buzzing atmosphere of the sponsor tent-lined jump ring. Coming to Millbrook is often also chance to connect with friends and family. Many Area II and III-based pairs, who often have much closer events that they could go to instead, choose to make the hours and hours long trip to Millbrook to catch up with loved ones that live in the Northeast. 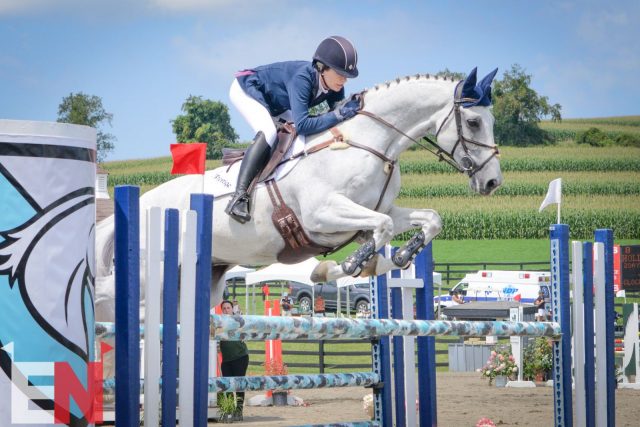 Leading the field in the Advanced division wire-to-wire, Holly Payne Caravella and CharmKing claimed their second win in a row, having also won the Advanced at the Horse Park of New Jersey this June.

Holly told us yesterday after cross country that she wasn’t necessarily pushing to get the time, though the heavy and frequent rain that the area has recently experienced has allowed for faster rounds this year. Holly’s main focus for the cross country was to kick on and give “Charm” a positive ride.

“I was actually surprised at the end when I kind of looked at my watch and I went, ‘Wow, I’m actually like, on the time basically.’ So that was a pleasant surprise,” Holly told us yesterday. “I think he was very smooth. We just had to ride forward to make sure we were going to get the distances done.” 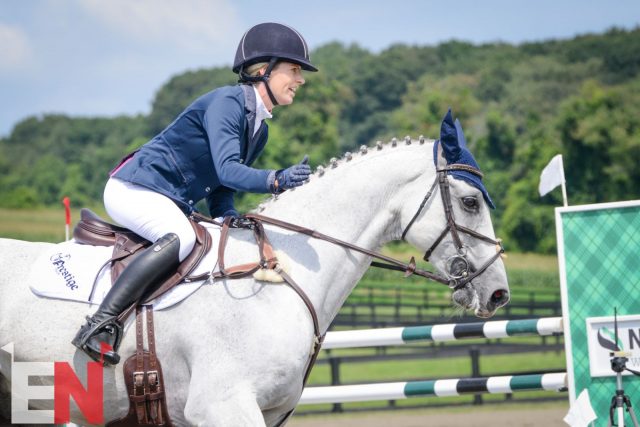 The pair jumped one of nine double clear rounds over the Marc Donovan track to earn a wire-to-wire win in the Advanced division. Looking at his competition record, Charm has show jumped double clear in the vast majority of his rounds at the Advanced and Intermediate levels.

Being relatively new to the level, the 10-year-old Holsteiner owned by CharmKing LLC, has run several 4*-S with both Holly and Lillian Heard, who competed the gelding for her through Holly’s pregnancy. Holly and Charm’s next stop will be the American Eventing Championships (AEC)s to the contest the Advanced there and their season-end goal will be the 4*-L at Morven Park in October, which would be the first 4*-L for the horse.

Overnight second-placed pair Elizabeth Bortuzzo and Belongs To Tuefer sadly knocked four rails to drop them to a final placing of 12th. They have a lot to still be proud of though, especially with their fantastic cross country round yesterday and their finishing score still garners a qualifying ride at the level. Not too shabby for your first Advanced at all! 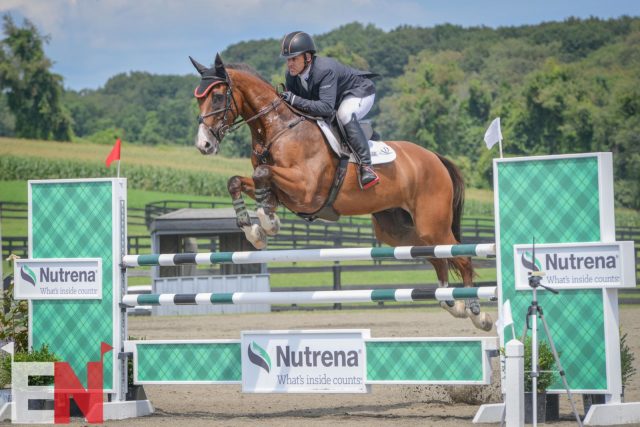 And audible shout could be heard at the end of one of Buck Davidson‘s rounds: “GOOD JOB DADDY!” called his young daughter Audrey from the fence line. Buck had three rides in the division and jumped two double clears to move Erroll Gobey and Jak My Style up one placing each for second and third, respectively. Both “Gobey” and “Jak”, along with barn mate Carlevo, who was not at Millbrook this weekend, will ideally be pointed at the new Maryland Five Star this fall after a trip to the AECs as well.

Buck was able to clock fast and clear rounds on the cross country yesterday too, garnering just 2 time penalties with Gobey and coming in under the time with Jak. Like many, many others here this weekend Buck is also feeling the loss of cross country course designer Tremaine Cooper, rode with Buck’s father, Bruce Davidson, and competed through the Advanced level himself before turning to course design.

“We’ve known each other since we were kids and we both grew up at Chesterland. It’s just definitely different not seeing Tremaine here,” said Buck. “Tremaine was looking down. The footing was perfect and the ground was perfect. We never have high 70s, low 80 degree weather with no humidity. It’s amazing.”

Several of the folks who own horses for Buck, including long-time supporters Carl and Cassie Siegel and Kathleen Cuca, were able to be there this weekend to watch their horses and cheer Buck on.

“It’s really fun. That’s what it’s about: having owners that are friends and they get to their horses,” he said. 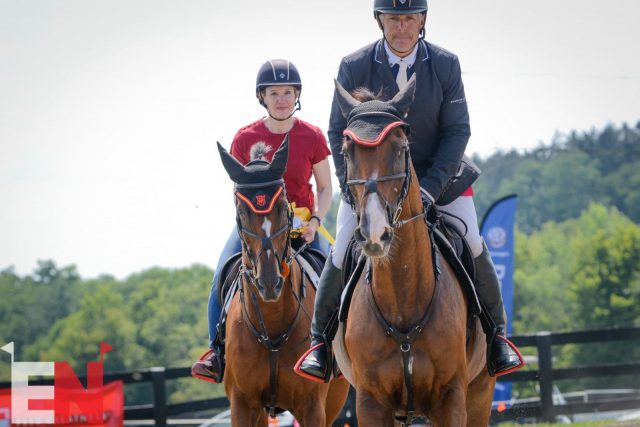 Kat Cuca and her own Jak My Style join Buck on Erroll Gobey for the victory gallop. Photo by Abby Powell.

Kat, who owns Jak, was actually able to do a little more  than cheer her horse on — Buck had her ride him for the prize giving ceremony. Kat also competed Jak in his first post-Kentucky outing: the Beginner Novice at Essex Horse Trails last month.

“He was a star — I got two rails though!” laughed Kat, who had previously ridden her horse in lessons with Buck and helps with the occasional trot set. “He was so amazing cross country. I stepped on the gas a little and then trotted the back half so I wouldn’t get speed penalties. And Buck trained me up so that I didn’t get completely terrified to do it.” 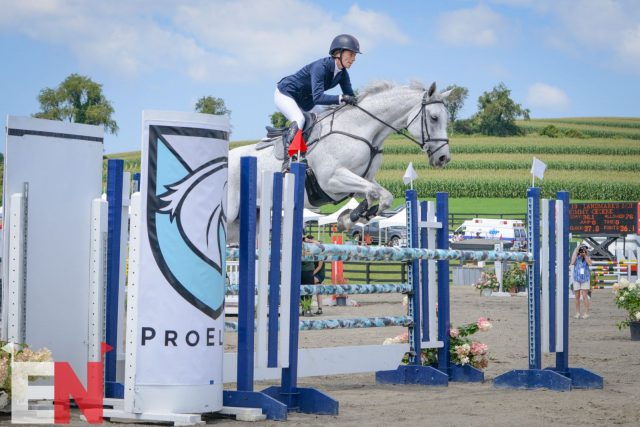 Also jumping double clear to retain her score for a fourth place finish, was Kimmy Cecere with Ms. Jaqueline Mars’ homebred Landmark’s Monaco, a 14-year-old Irish Sport Horse. Kimmy was rightly please with their showing this weekend and they’re another pair that we’ll hopefully see at Morven Park this fall.

“He was so wonderful. The footing was awesome and it was such a good weekend,” she said. 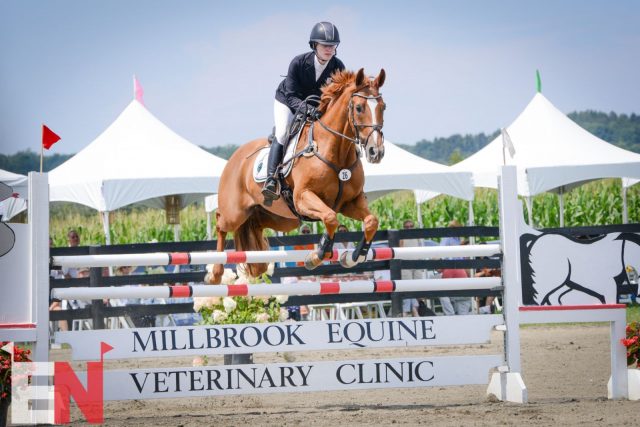 Sydney Solomon and Early Review C, a 12-year-old Hanoverian mare owned by herself and Laurie Cameron, round out the top five and jumped sixteen places in the standings after dressage, thanks to double clear rounds in both jumping phases. They’re not quite the winners of the biggest mover award, however. That goes to Fylicia Barr and Galloway Sunrise, who ultimately finish their weekend in 8th place. They moved up seventeen places after dressage and clocked the fastest round of the day on cross country yesterday. 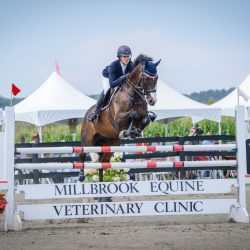 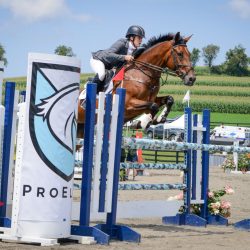 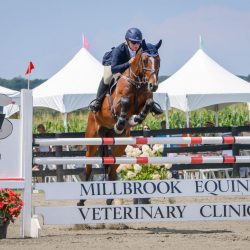 Colleen Rutledge and C Me Fly. Photo by Abby Powell. 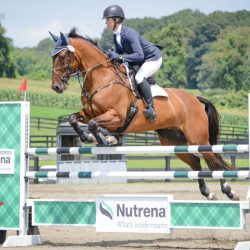 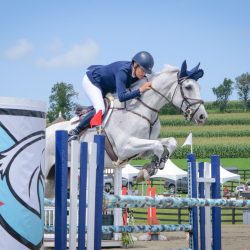 While there’s so much more to say about this weekend at Millbrook and SO many more pictures to post (like, so many) that’s going to have to conclude this report for the time being — this reporter still has to drive the rest of the way home and be at least semi-functional for a regular day job tomorrow. Thank you to all who make Millbrook such an exceptional event to attend. Stay tuned for more to come. 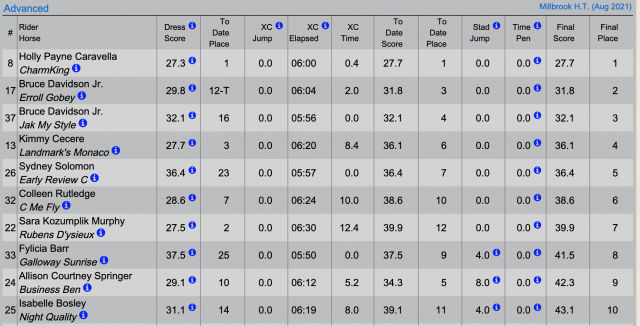